Home
/
PC
PC Reviews
This War of Mine: The Little Ones Review
Share Review 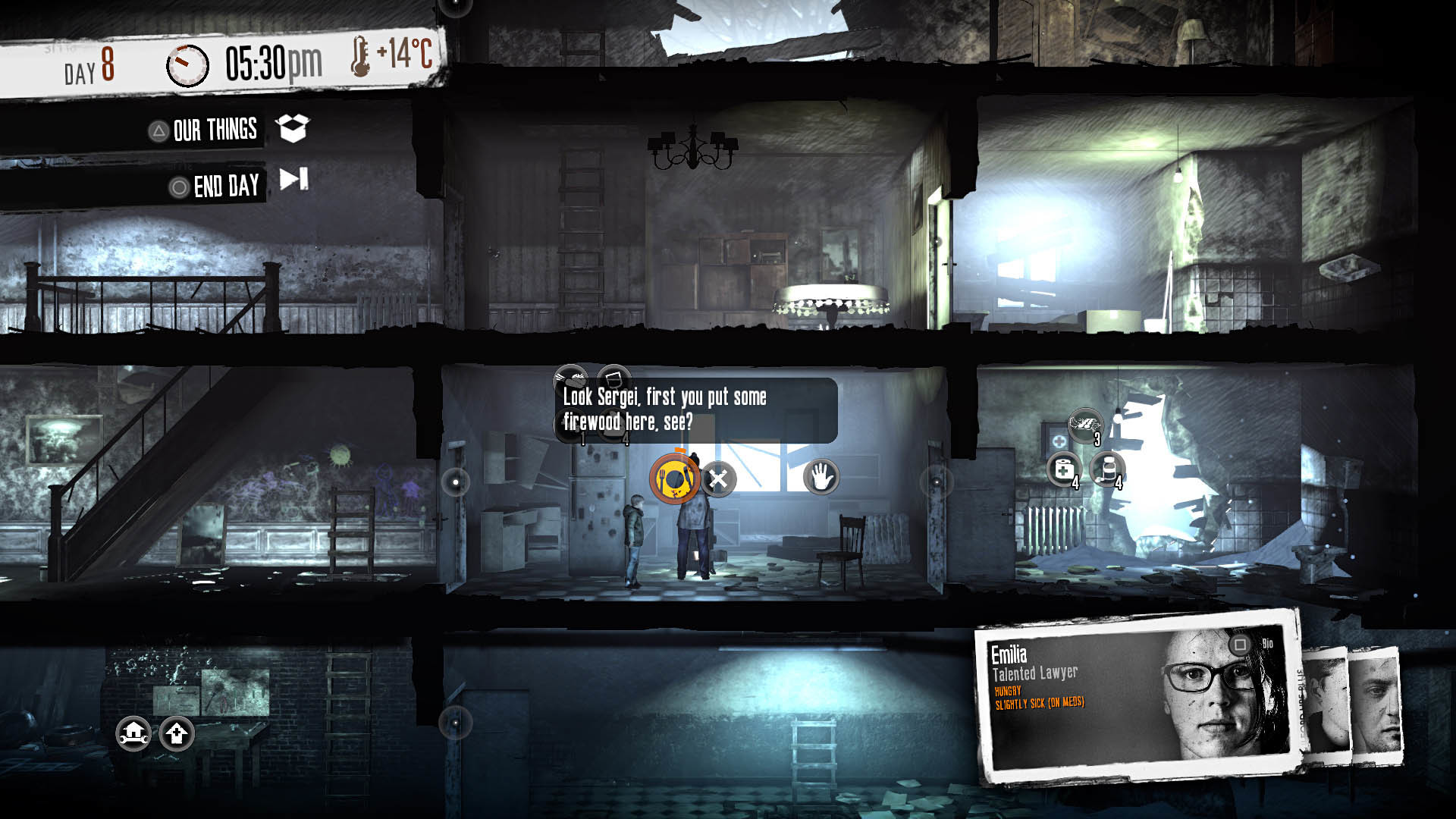 When it comes to video games, we only ever see one side of warfare. We’ve all shot down enemy soldiers, taken down encampments and destroyed any number of civilian buildings, but never before have we experienced war from the perspective of the poor people living in those crumbling often bombarded buildings, of the families just trying to survive as the world around them is torn to the ground. There’s a good reason for this of course – it sounds horrifying. War might well be hell, but usually, when it comes to video games at least, you’re put into a proactive position and usually on what ultimately turns out to be the winning side.

The problem when it comes to civilians of course is that there rarely is a winning side. Regardless of how the local war effort is going, civilians are invariably left without power, basic amenities, and above all else, the everyday sustenance needed to survive. Whatever way you look at it, 11 bit studios’ decision to develop a war simulator based upon the experiences of every day civilians was a bold one, one that bravely refuses to shy away from the reality of surviving a war – even when it’s at the cost of what one might traditionally consider to be genuinely fun.

The fact of the matter is, This War Of Mine: The Little Ones is not fun. It’s not fun at all. You know what though, that’s absolutely fine. If the industry is to continue to broaden its horizons, developers and gamers will need to embrace this kind of tricky subject matter. Was the Revenant fun? No. Did that stop it from being a well-made, entertaining, memorable piece of art? Not in the slightest. Not all games have to be ‘fun’ in the traditional sense, and while This War Of Mine is better conceptually than it is technically, it should still be applauded for its willingness to tackle what is a very tricky and often harrowing subject matter. 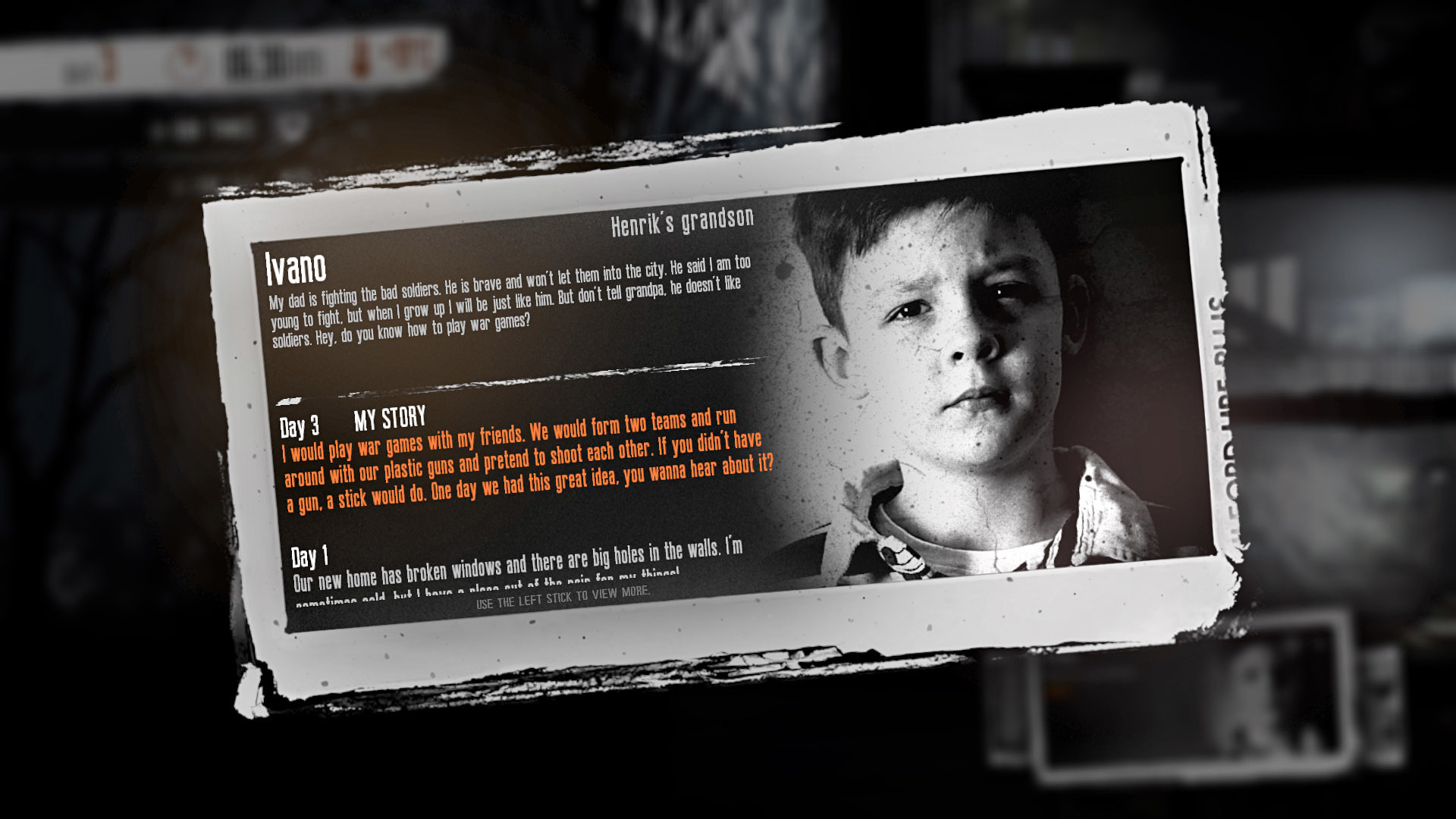 Despite its lofty goals, the experience isn’t without its issues – the use of items does not always make sense in a real world setting (why can’t I use this brick to defend myself?), and the controls, while rudimentary, can certainly feel simultaneously loose and somehow clunky. Some would argue that the day settings which are geared towards item management, improving your dwelling and planning for the night ahead can be boring, but honestly, I think that is part of the games’ genius. Simply put, war isn’t always exciting. Whichever side you are approaching the war from, be it civilian or soldier, in real world conflicts, there is usually more down time than just about anything else. Yes, you have to scavenge at night and you need to feed yourself and plan for the future in the day, but you also need to, well, sit down for a bit. There is a lot of time in the day when, if you’re short of supplies in particular, there is little to do other than sleep or simply stand about. Of course, you can skip to the evening sections of the game which are closer to what the majority of us would consider to be a more traditional video game experience, but those evening sections wouldn’t be nearly as effective if it weren’t for the relative mundaneness of the day.

Once you do get to the evening sections, This War Of Mine moves away from its rather depressing take on The Sims and its basic inventory management, and instead becomes a simple but largely effective stealth game in which gambling is as important as getting the drop on potential enemies. Before heading out to different parts of the war-torn city, you need to choose what items to take for potential bartering while also deciding who gets to sleep and who will stay up to guard your derelict home. That probably sounds easy enough, but everyone has to sleep – do you risk letting people rest or having additional man power on the streets at the potential cost of your home being looted? Do you take items to barter on leave enough room for items that you find while scavenging? What about the people you run into? Do you attack them? Do you treat them with the respect that you would want to be treated with yourself? If you have the items at your disposal, you can essentially approach the game however you see fit. Want to kill innocent civilians for their goods? Go for it – just be warned, the morale of your character might well lead to depression and, if left unchecked, even suicide. Yeah, it’s that kind of game.

Again, the actual mechanics are simple at best, clunky at worst, but there is something about the constant risk/reward of everything you do and the subsequent consequences of those actions that makes these slightly clumsy mechanics relatively easy to bear. What also helps of course is that all-enveloping sense of dread and depression; the artistic design might not be flashy, but the hand-drawn feel of the visuals and the shift from the almost disturbingly quite days to the brutal sound of the wind at night help to keep you engrossed in the experience throughout. It’s rare that silence is used to such great effect as it is here and, while it might sound odd to say that the game has brilliant wind, you know what, I’m going to say it, the game has brilliant wind. There is something about the sound of the wind howling around you as you attempt to sneak into what you hope are abandoned houses that manages to bring the game to life in a way that only good sound design can. The game is full of these little touches, and it’s these subtle but successful touches that make any faults easy to overlook. 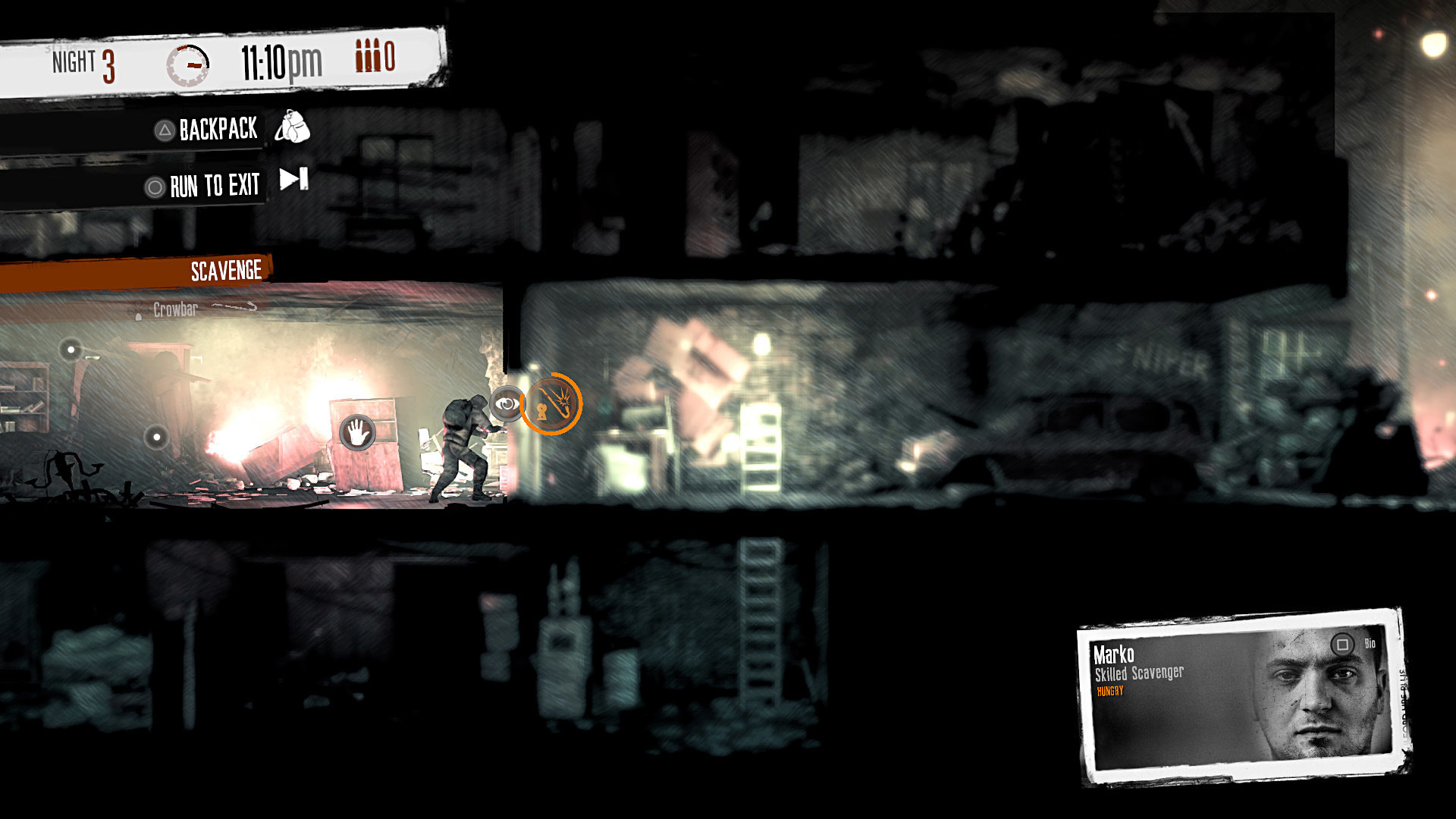 This War Of Mine: The Little Ones is basically a direct port of the PC game released in 2014, but as the new title suggests, the console version also includes children which, as you might suspect, only adds to the array of moral quandaries put before you. Seeing an adult character suffer, whether it be from pain, hunger or lack of sleep, can certainly be disconcerting, but it’s even harder to take when one of the children in your charge is suffering in the same way. Whether it be physical pain, depression or even simple boredom, seeing children struggle through this horrendous experience can be downright difficult to deal with (especially if you have kids of your own). Do you keep them happy at the expense of the group? Do you dare ignore their needs due to their inability to successfully guard or scavenge? These are tough moral dilemmas which the game doesn’t force upon you but instead simply places before you. There are no literal rewards for helping others here, just the knowledge that you have done the ‘right thing’. Do you treat them with additional care because they are children or do you let them starve due to their general lack of use to the unit? The decision is yours, and for many of us, it’s a decision not easily made.

This War Of Mine: The Little Ones is not a fun experience, but I’ll be damned if it’s not memorable one. Both compelling and harrowing in equal measures, the gameplay might have its quirks, and you could certainly argue that aspects of it are downright boring, but as a realistic representation of the civilian experience during war-time, 11 bit studios’ have pulled no punches. Arduous, horrifying, boring, exciting, depressing; This War Of Mine: The Little Ones is all of these things and so much more. Every decision you make has both tactical and moral repercussions, and with nothing to guide you beyond your own moral compass, is a game that can tell you as much about yourself as it does about war.

Tags:11 bit studios, Action & Adventure, Deep Silver, Rating 8/10, simulation, strategy, The Little Ones, This War of Mine, Xbox One, Xbox One Review