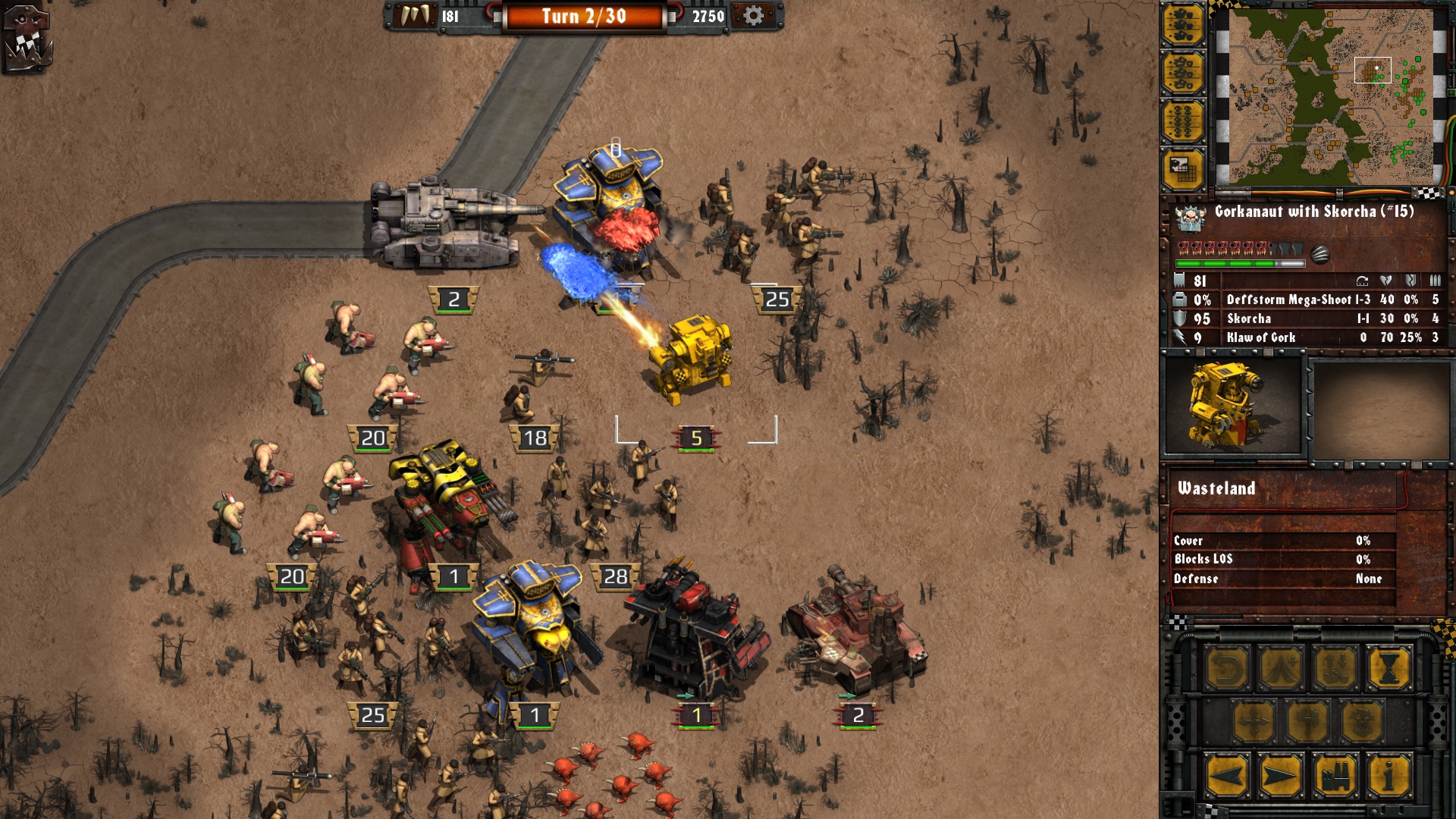 Warhammer 40,000: Armageddon – Da Orks (or Da Orks from now on) is the latest turn based strategy offering from genre veterans Slitherine Software, who are perhaps best known for their work on bringing the Panzer General series up to date with Panzer Corps. Da Orks is effectively a standalone expansion to the original Warhammer 40,000: Armageddon game and unsurprisingly, it focusses almost entirely on the always violent, often amusing and occasionally misunderstood green skins.

Like the original Armageddon, Da Orks presents players with a series of increasingly large battlefields that are divided into hexagonal spaces. Players take it in turns to move around the map fighting one or more enemy armies, with the aim of either eradicating them completely or capturing strategic objectives within a time limit, and holding them against the inevitable counterattack. Every map has a range of different terrains that must be considered, with some that are impassable by vehicles, and others that present significant cover advantages – to a much greater extent than seen in similar games. 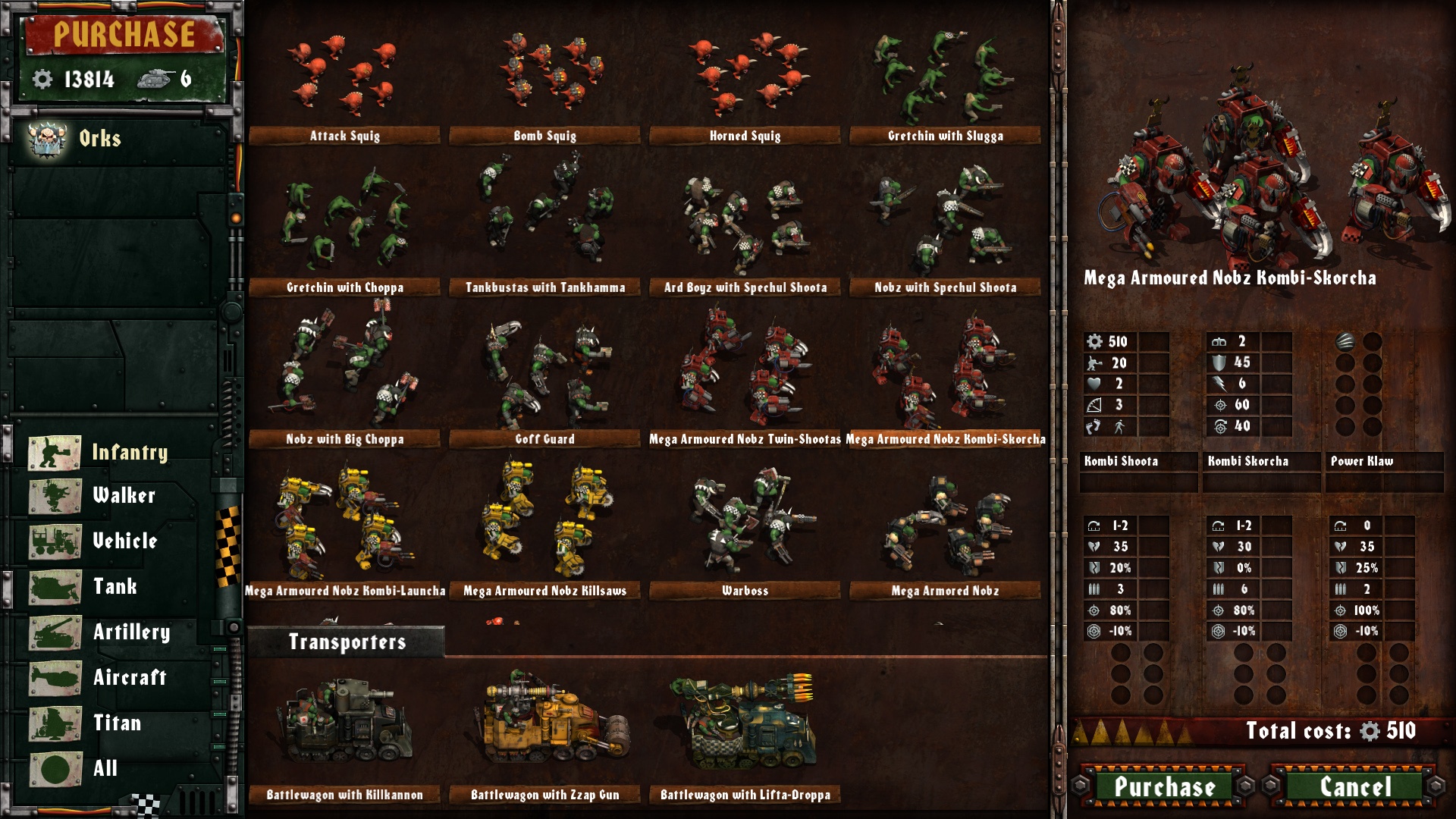 On that note, Da Orks is a deeply strategic game that will test even the most experienced armchair general to the limit. The game features an astonishing array of units, and it introduces a large number of them very early on. The ork commander will need to rapidly figure out the strengths and weaknesses of his or her own army, and at the same time work out how best to use them against equally vast and diverse enemy forces. The game does feature a reasonable tutorial and a very detailed digital manual, and between them it is possible to get a good understanding of what’s in store, but Da Orks offers quite the baptism of fire nonetheless.

There are four difficulty levels, and unfortunately whilst the easiest of these presents almost no level of challenge, the normal difficulty spikes uncontrollably from tough to absolutely brutal. I honestly didn’t try the two harder modes, but I’m sure they must be frustrating at best and close to impossible at worst. Da Orks is the kind of game that makes every decision count and punishes mistakes heavily. Throw two or three weak units at a stronger one that destroys them and leaves you weak against something later in the battle? Yes, that will happen. Fail to reinforce the correct front and lose a key objective on the other? Sure, that will happen as well. The game features a couple of mechanics that allow units to spend a turn by resting or reinforcing rather than taking a move or attack action, and those mechanics can enable the kind of last stand that will turn the tide of battle, but in all honesty once things go awry in Da Orks, it’s usually better to restart a losing battle. 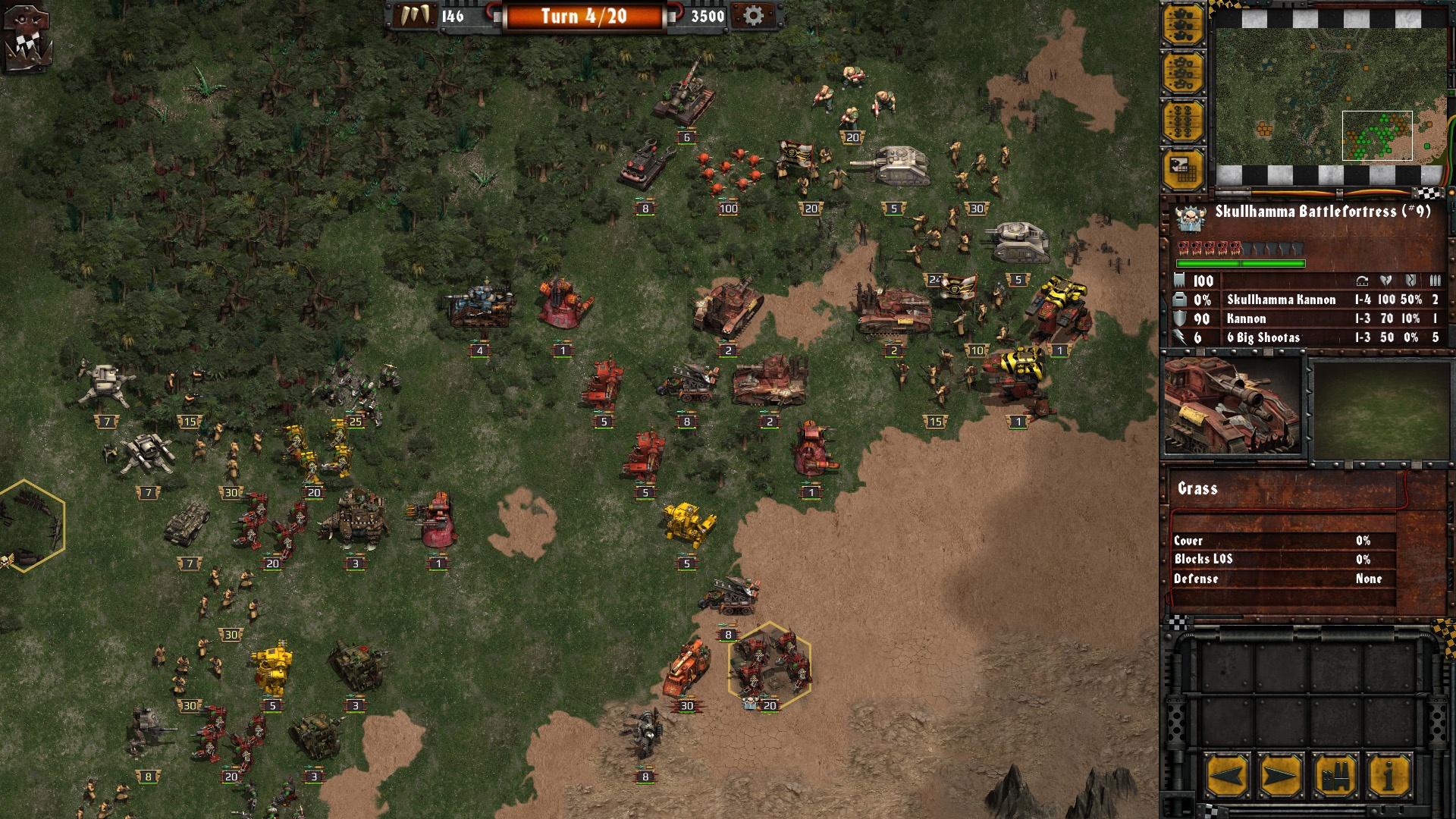 The important thing about Da Orks is how it plays rather than how it looks, but regardless of that it is a decent looking game in a functional sort of way. With the exception of distinguishing exactly what weapon each unit has equipped when next to identical base units of the same type, each infantry unit, tank, mech so on has a distinct enough look that commanding them becomes instinctive in no time. Firing animations and sound effects are reasonable, and overall the presentation in battle is as good as any other turn based hex game I’ve seen. Between battles, the plot is driven along by voice acted conversations between various key characters, but there are no cut scenes as such.

All in all, Da Orks is a more than satisfactory hex based strategy game that, like the original Armageddon, makes excellent use of the Warhammer 40k license. The huge range of units in the Warhammer universe is fully unleashed by Slitherine from the outset, with huge battles that would cost literally thousands of pounds to recreate on the table top. There are only really two negative points to consider about Da Orks. The first of these is the fact that whilst multiplayer is present, it is quite slow considering the turn based nature of the game. The second is that whilst Da Orks features a ton of Warhammer 40k’s finest units, it changes a few key mechanics to suit the hex based gameplay. For example, units don’t break and run like they do in the table top game, and some of the more exclusive, powerful units appear weaker than they should be, for example the titans. These points are minor though, and likely only relevant to hardcore fans of the miniatures game. Anyone looking for solid, turn based strategy that isn’t hindered by historical accuracy will certainly find it here.