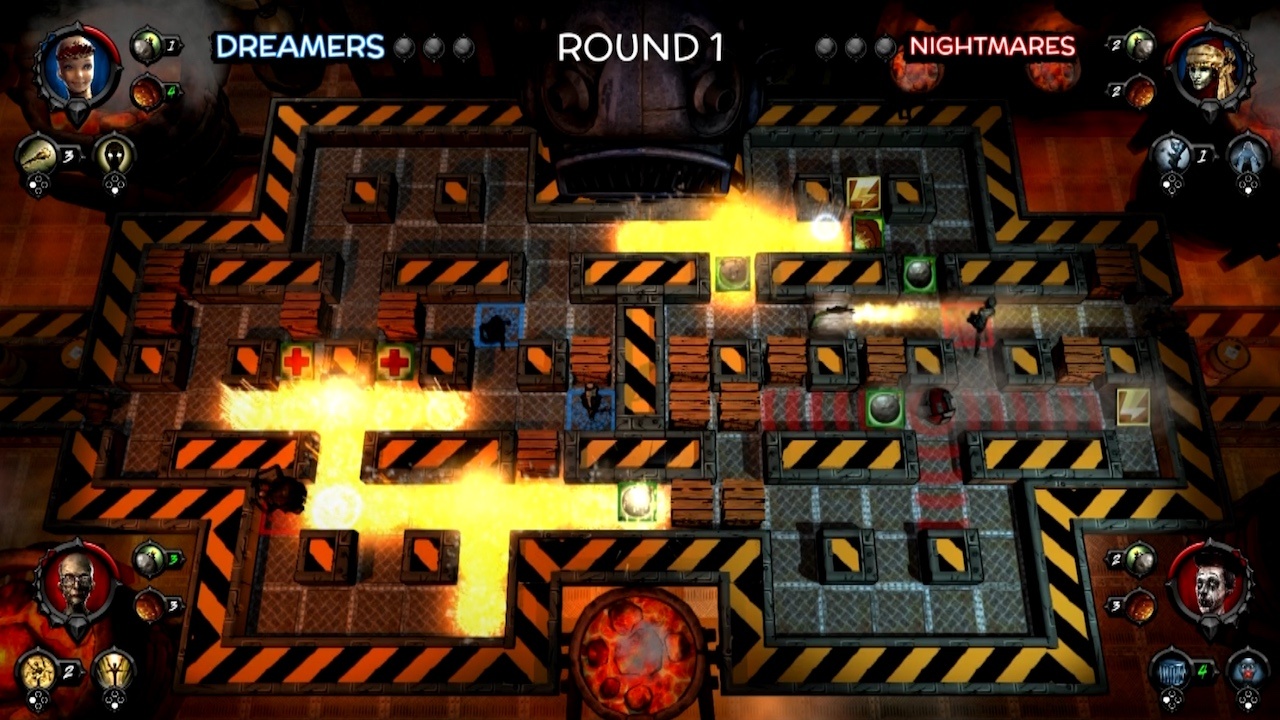 There is something to be said for setting expectations, and the gaming industry has been tripping over themselves trying to make some kind of consistency with players and IPs. When you take, for example, a game like Assassin’s Creed, you expect there to be a 3D, third person action/adventure/RPG that makes you go out and kill people with parkour and stealth. So when some people played Assassin’s Creed: Chronicles, they may have been a trifle disappointed with how that whole thing was handled. When games deliver something other than what you expect, it really becomes a wildcard situation that leaves the fate of that game’s future entirely in the hands of the player, who needs to decide if it’s worth continuing onward. In the case of Chronicles, I kept going and had a blast because, well, sidescrollers are my jam and I wasn’t disappointed. BRAWL also set me on my head, but, thankfully, it also turned out to be something unexpected but not bad at all.

BRAWL, for those who aren’t familiar, is an incredibly dark and creepy game that centers around a place called The Emporium, which appears to be some kind of hybrid of asylum and jail, but also a warehouse for abandoned mannequins and dolls. There’s a dark presence here, some kind of narrator who also views themselves as a God or maybe just controller, and he watches over all the inhabitants here. Most of them are wretches from other walks of life who’ve ended up here by terrible chance, but others are animated beings that now move and fight for his amusement. In any case, the whole thing is a setup to say that here are where awful and terrible things come together to duke it out, and he laughs and makes his own perverse sense of humor work throughout. Thankfully, you don’t have to deal much with the narrator except for in the story modes.

Did you ever know a kid in school who just tried way, way too hard to be goth? Picture someone in the mid 90s who was just getting into Marilyn Manson because he liked that it made parents upset, but wasn’t interested in listing to Siouxsie and the Banshees because it was old and therefore not cool. He talks in a way that makes sure to always allude to dark and violent stuff, like he was always watching Texas Chainsaw Massacre, but didn’t use any viscera in his sentences because he knew that would get him sent to the principal’s office, so it was always kind of vague. That’s what the narrator of BRAWL reminds me of, someone who thinks they’re Vincent Price but they’re more David S. Pumpkins. It honestly got annoying after a while, and listening to him was an uncompromising point in getting through the story modes and unlocking more characters (at least, more for story mode: everything’s unlocked in multiplayer from the drop). As a result of the way he talks and the way information was presented, I couldn’t care less about the clown who no one laughed at or the blind little girl with a murderous teddy bear. I just wanted to keep moving so he could shut up. 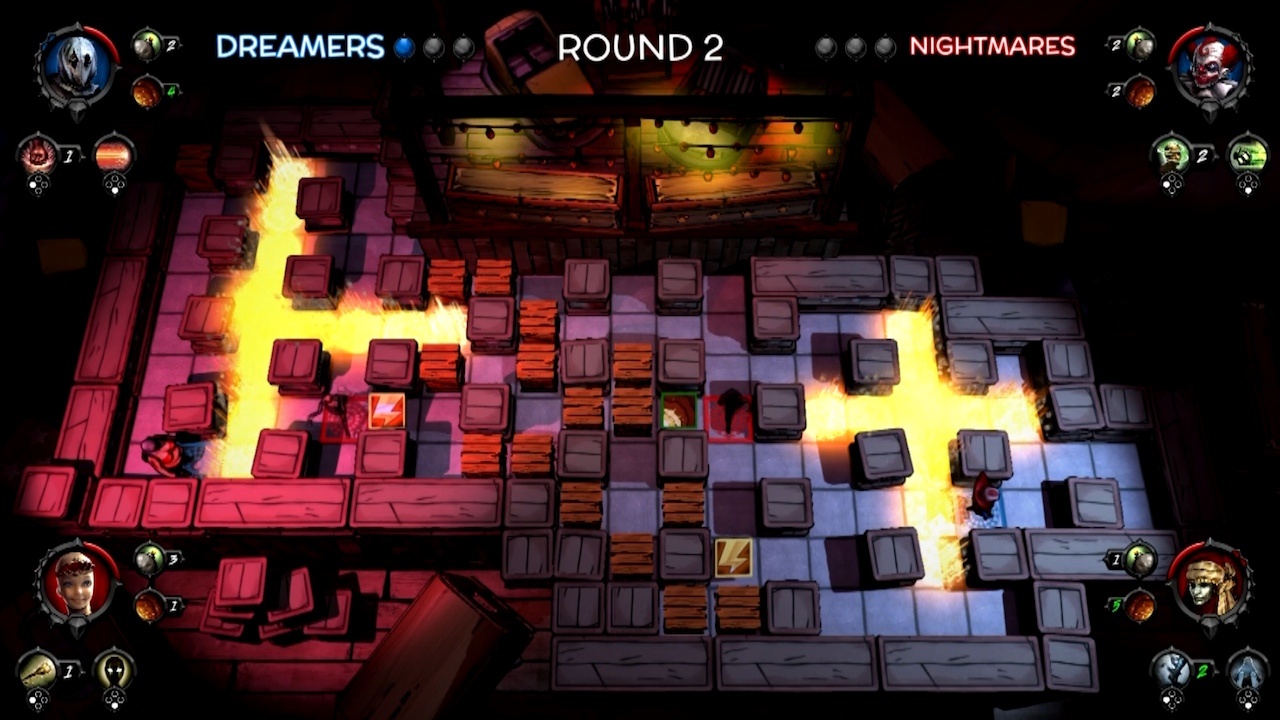 As it turns out, in the midst of all this dark and tragic imagery is what the developers (Bloober Team) lovingly refer to as an “explosive competitive arena,” which is another way to say that you run around on a grid and try to set bombs in order to explode the other player or players. If this at all sounds familiar, I won’t fault you for getting the same conclusion that I did, but it’s not always fair to refer to a game as a clone of another, especially when it’s not exactly a cornered market. BRAWL, to its credit, does a lot to bring other things to the table besides the map and explosions. If that’s all there was to it, this review would be over, I’d stamp a one on the scorecard and then I’d go skip rope in the parking lot or whatever it is you do after phoning in a review. Instead, the mechanics of each player help make this otherwise absurd experience into something quite interesting.

First and foremost, the atmosphere and undertones of the entire game (the characters, the setting, the traps) help to foist this into a totally different sort of mindset than other explosive arena games that may or may not contain both bombs and men. Instead, the inclusion of traps and sinister mobs all around give this already dark game an even darker edge that, as a result, totally makes sense. Of course there are spikes and falling objects, this is in a place run by a madman who hates you! And the mobs, instead of being cute little clones of yourself, are often horrifying, broken things and people, in different states of undress and distress, and they scare the hell out of you when you go in for a closer look. Interestingly, despite all the implications, the explosions that take out the mobs are neither graphic nor gory, but just a simple conflagration that results in their death and a point on your scorecard.

Additionally, each of the players does have their own unique quirks and abilities that help evolve a sort of strategy. The little girl, for example, can throw knives that slow down targets and also lets her teleport to a fixed point on the map (making her invaluable for certain maneuvers in later stages). The mime (of course there’s a mime) can create invisible boxes that trap and limit your opponent into a 9×9 grid with you, perfect for the assassination take down. These abilities are all over the place and all have their own pluses and minuses. And can honestly take a lot of practice before you can effectively use them. If you find this to be too distracting of an additional feature in a game where you’re already juggling bombs, not to worry: you can play a traditional mode of “blow everyone up” that removes the abilities entirely and just makes you rely on your own munitions expertise. 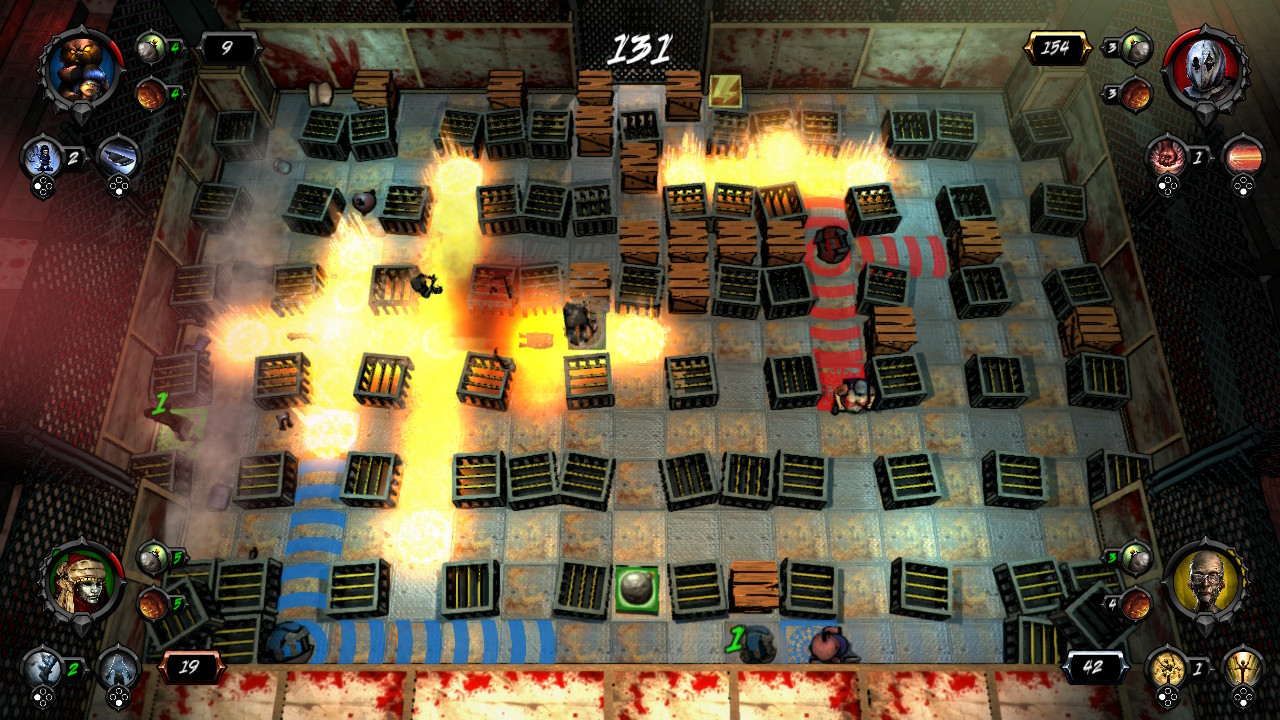 The multiple ways to play BRAWL as a multiplayer game are what really make this shine as a title, and reminds you of what is really important at the core. Between the classic duel, the odd Sumo mode (knock people off the ledges with explosives and abilities) and coloring the tiles through explosions (ridiculously fun), there’s a metric ton of replay value for friends and foes alike here that most people simply couldn’t find in the Bomberman title that came out close to a year ago near the Switch’s launch. All the controls port over quickly and easily to a sideways JoyCon, so anyone with two sets already is ready for some serious four player action. Alas, there is no setting to turn on or off the rumble, so I hope you like numb hands, because this game is going to rattle your digits nonstop until you finish.

It does need to be said that the difficulty of BRAWL in solo mode is insane, and reasonably seasoned players will still have a hard time getting through the last waves of attackers in order to reach the ending story that is attached to every character’s storyline. I know it’s not the most important thing in a game that’s clearly meant to be played with other people, but, believe it or not, there’s still quite a few of us who enjoy a single player romp, and this one is rough as hell. Have patience and liquor on hand.

But BRAWL is still a pretty rad experience once you get over the shock that this is an explosion competitive arena and not, say, a fighting game or something. And you can easily adapt to the creepy and unsettling nature of the game, though that icon is getting bumped off my top library immediately so it stops scaring my kids. If you’ve got a perchance for the dark and really want a way to blow up your friends in a new fashion, then you might just take a tumble with BRAWL.