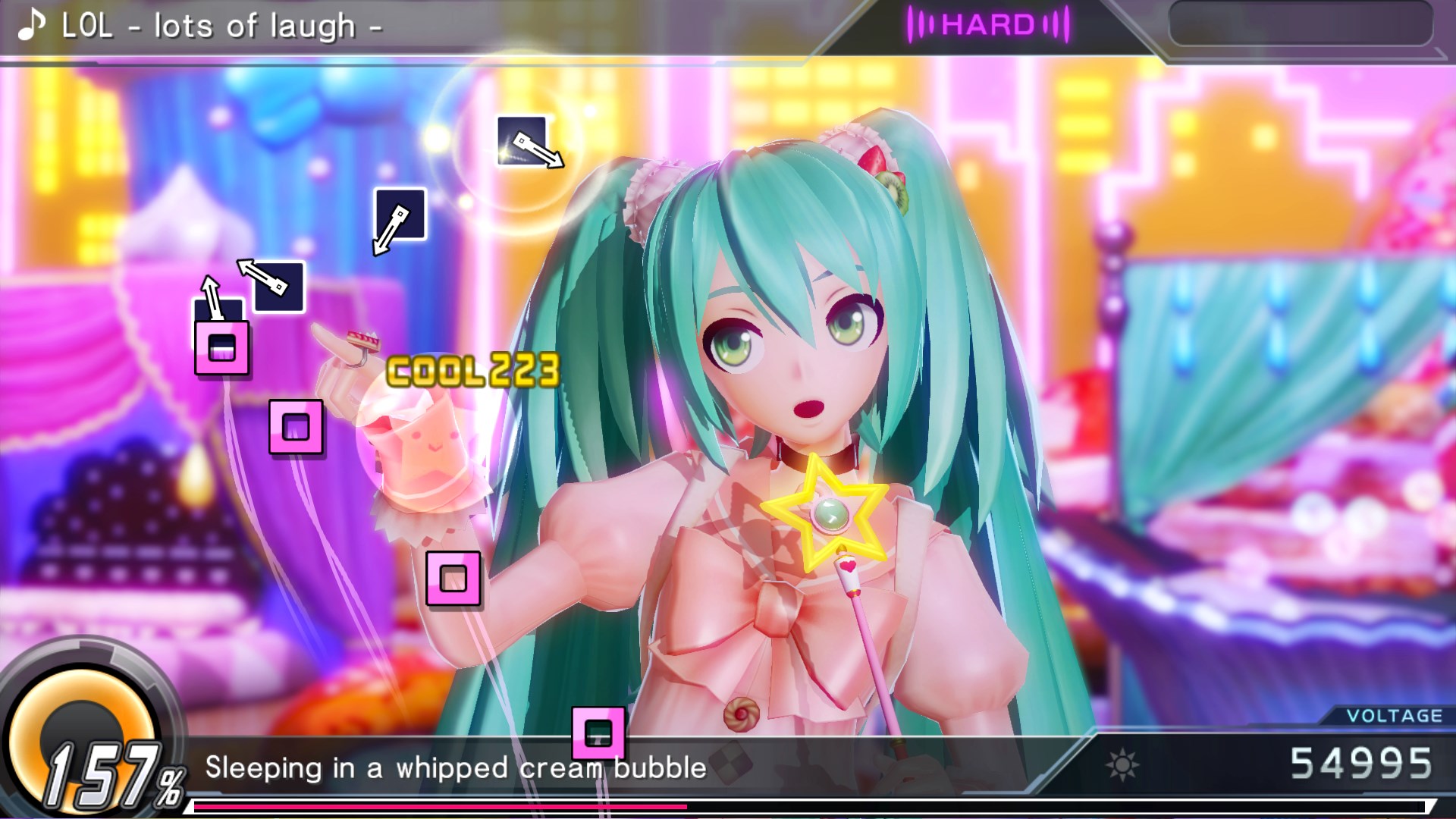 She might not be a household name in the UK, but Hatsune Miku is a global superstar. Beyond the numerous video games and the mountain of memorabilia, Hatsune Miku has sold out stadiums all across the world and appeared on a host of TV shows…….oh, and she’s a hologram. Yes, the fact that she is not real hasn’t stopped her from performing on stage in front of millions of adoring fans or making an appearance on the Late Show with David Letterman.

A “vocaloid humanoid persona”, Hatsune Miku was created using synthesised singing technology to create one of the worlds’ most beloved popstars and one of Japan’s most popular exports. Beyond the merchandising empire that has sprung up in her image, Hatsune Miku has spawned a host of extremely popular rhythm videogames under the careful tutelage of Sega. Almost universally brilliant, Hatsune Miku’s first venture onto the PlayStation 4 proves just as successful.

While Hatsune Miku: Project Diva X doesn’t deviate greatly from the successful template on which the series has been built, there is enough in the way on new content to make it stand out from its predecessors while keeping enough of what has always been great about the series to make it both welcoming and pleasantly familiar.

In terms of the core mechanics, this is still all about hitting notes using the face buttons of your controller. The only new addition is that of rush notes that ask you to smash the button repeatedly Track & Field style. It’s hardly revelatory, but it delivers a new twist to the gameplay without compromising the fundamental formula. Beyond that, yeah, it’s business as usual; notes can appear from anywhere on screen in an number of unique arcs and patterns. As always, the difficulty comes from both getting the timing right and keeping an eye on where the next note is coming from. 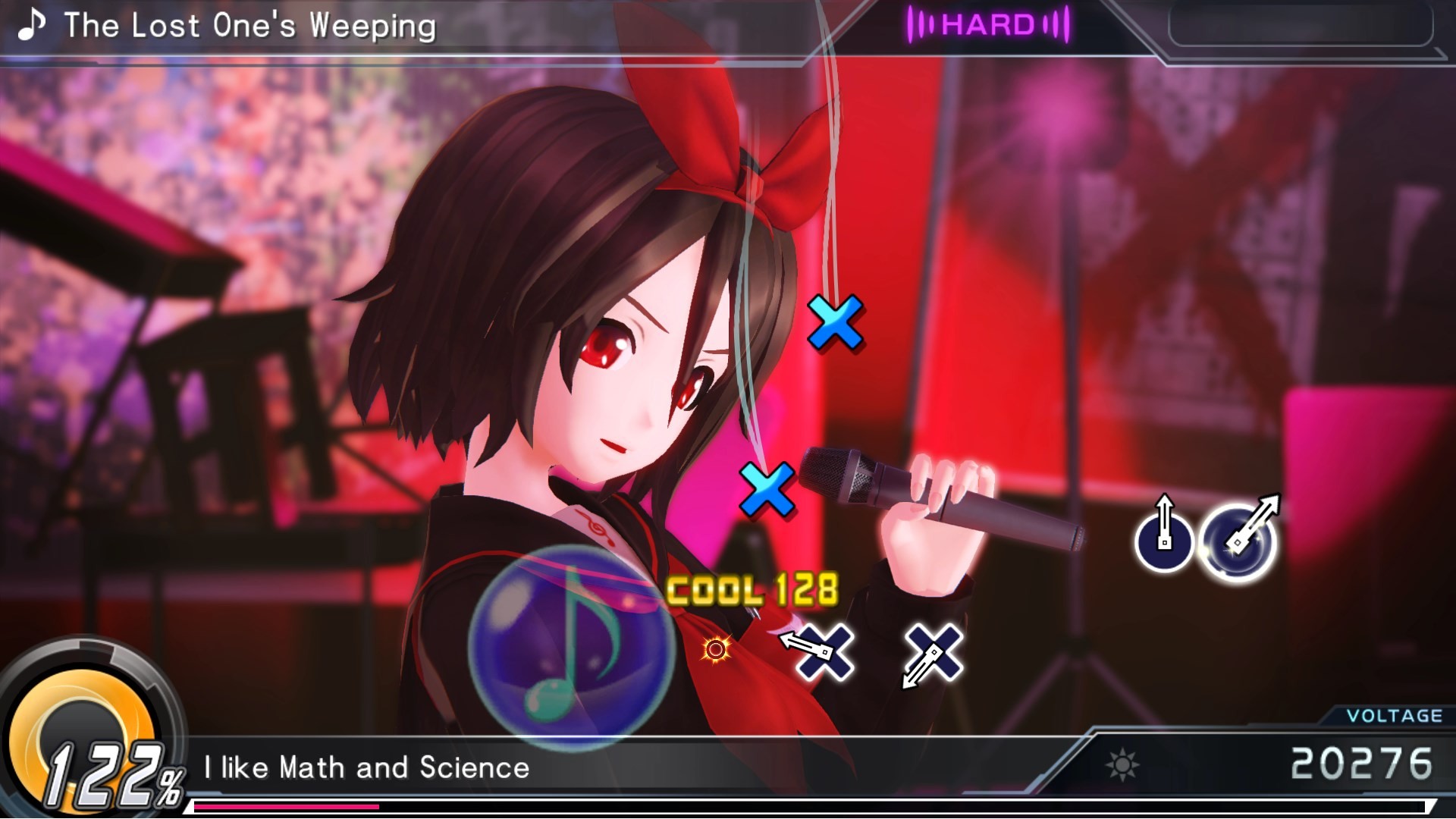 These mechanics probably don’t sound all that exciting to the uninitiated, but in practice, it works brilliantly with the difficulty able to scale easily and newcomers able to understand the base mechanics all but immediately. The only issue, and this is nothing new to the series, is just how busy things can get. With the music videos rich in the way of visual pyrotechnics, it’s occasionally hard to keep track of the notes as they become lost is the colourful mayhem on screen. The videos themselves all look great, but when you’re trying to keep track of the action, they can sometimes be a tad too flashy for their own good. Still, this really is a minor niggle, one that is unlikely to get in the way of your overall enjoyment of the game.

With the gameplay remaining largely unchanged, it is down to the content and presentation to provide something new for the series’ first release on a current gen console. Beyond the 60fps visuals and generally sharper images providing the kind of visual bump one might expect from the move to PS4 hardware, it is actually an artistic choice that ultimately makes the more notable impact. Rather than the often crazy videos of previous releases, each song is accompanied by a stage performance with its own unique choreography. It looks great, but as somebody who always enjoyed the wild imagination of the videos included in many of the series’ previous releases, this move to a more structured format does feel a tad disappointing. It still looks fantastic and it’s all as charming as ever, but it has arguably lost a bit of the likeable oddness inherent to the original video format.

The other big change comes in the form of the career mode and the subsequent way in which additional content is unlocked. With a story added to create a sense of progression, Project Diva X certainly feels like a more complete product than its predecessors. The story is of course utter mince, but it’s all charming enough and provides plenty of encouragement to complete each of the games’ collection of extremely eclectic songs.

The unlock system that includes over 300 costumes to collect and an absolute mountain of additional accessories is now built into the experience in a much more organic and effective way. The outfits are collected by completing requests as you progress; they are rarely all that hard to complete, but whether it be hitting a specific mark in a specific song or reaching a predefined points total, these do lead to a greater investment in the song currently playing while providing plenty of reason to revisit tracks once initially completed. Of course, you can return to any song to beat your previous high score, but with random costumes ready to be unlocked, there is a greater incentive to revisit previous tracks over and over again (especially for more casual players). 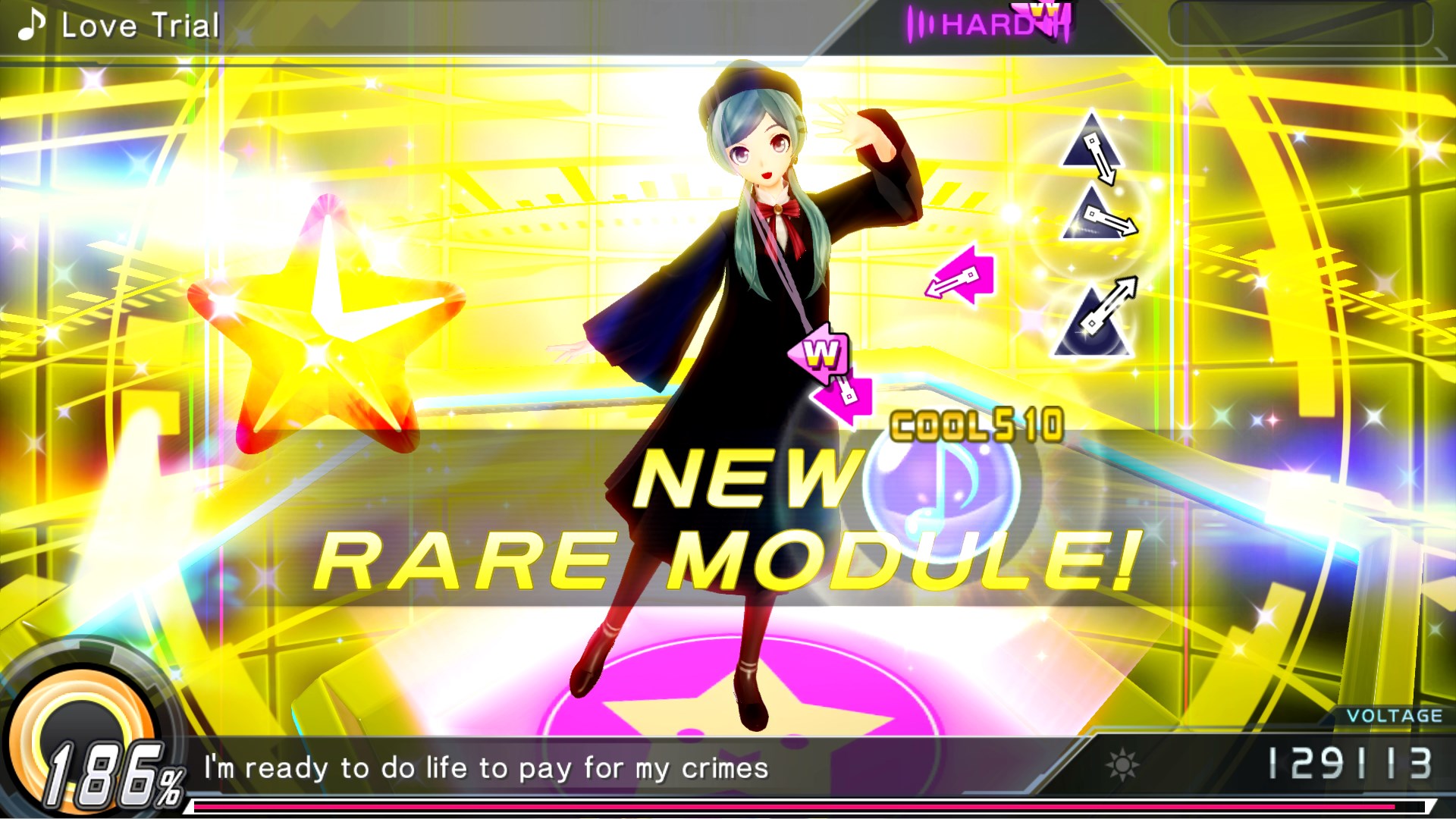 It also helps that the outfits unlocked are imbued with specific aura powers that make wearing them extremely beneficial when it comes to subsequent score chasing. You see, each song is now tied to one of five specific aura types (Classic, Cool, Cute, Elegant, or Quirky) and by equipping an outfit of the same type (or ‘Module’ as it is known in game), you will be imbued with additional abilities and skills that make completion/high scores that much easier to achieve. Yes, purists might well scoff at the idea of active buffs, but as a gaming loop, it’s hard to argue with just how addictive it all is.

The 30 strong playlist might not be the biggest in the series’ history, but it’s undoubtedly one of the more eclectic. Given the nature of Vocaloid output, the number does seem a tad stingy, but in fairness, there is very little in the way of repetition here with the vast majority of tracks not seen (or heard) in previous releases. It could be argued that the collection lacks a genuinely killer tune, but as a complete package, it’s a solid and very likeable selection of tracks.

Hatsune Miku: Project Diva X plays it very safe, but despite its familiarity, it does more than enough to justify the jump to the PlayStation 4 hardware. Some might bemoan the lack of changes to the core gameplay, but the minor amendments work very well with the more dramatic changes to the structure making this feel like a genuinely new experience. The screen remains too busy and the new concert setting comes at the cost of some of the series’ manic charm, but for the most part, Project Diva X proves another major success for this quietly brilliant series.