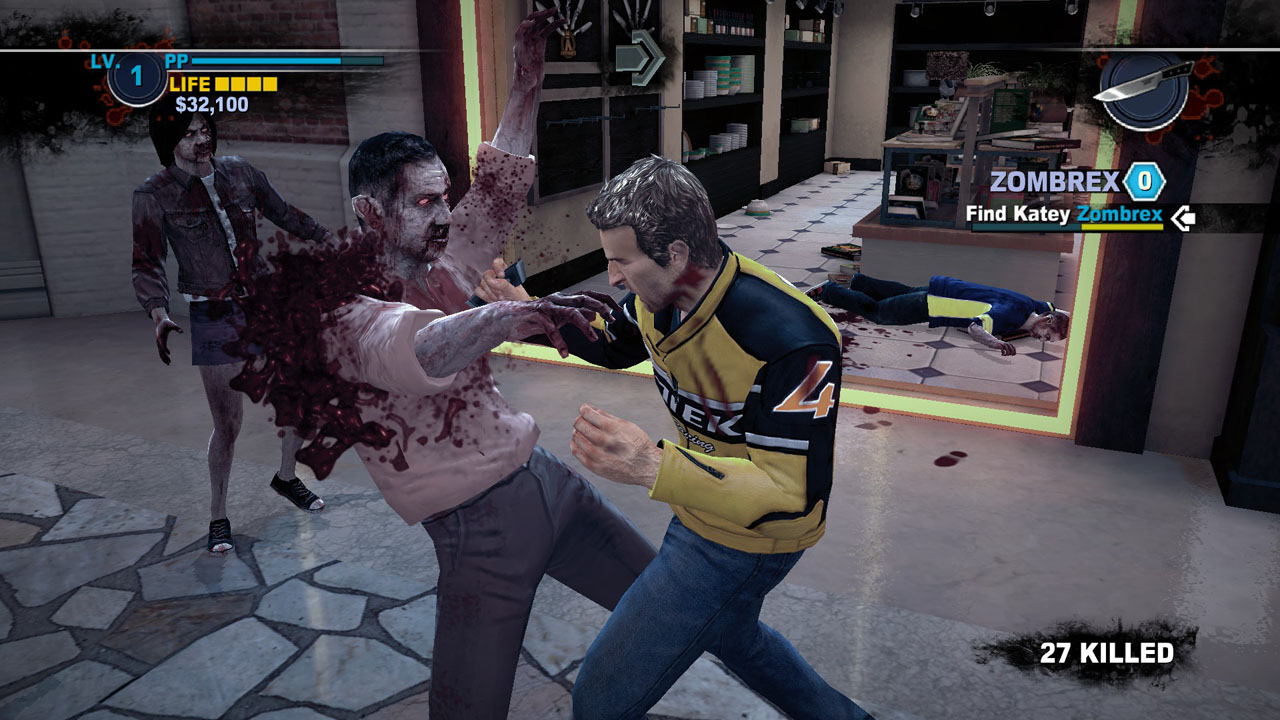 Dead Rising 2 originally released in 2010; a sequel to the hit Dead Rising. For me it was a very important event as I was finally able to play Dead Rising on my PlayStation 3. The original was an Xbox 360 exclusive and I had to borrow a friend’s 360 to play it and could only play it for three days. This was going to be my own game that I could play and search every nook and cranny myself without having to return the console and game.

Dead Rising 2 wasn’t developed by Capcom as the original was; developed by Blue Castle Games a Canadian based developer unlike Capcom who are Japanese. When this was first announced did not go down well since Blue Castle is mainly baseball game developers. Now they are known as Capcom Vancouver, and have developed multiple Dead Risings since then and are developing Dead Rising 4.

In this game you play as Chuck Greene a former motocross champion, he now takes part in Terror is Reality (TiR) a zombie killing gameshow taking place in Fortune City. He does this to raise money to buy Zombrex (an injection that can stop a person from turning for 24 hours) for his daughter. After playing through the TiR episode another outbreak occurs; the news reveals the culprit to be non-other than our Chuck Greene. Now you must take control of Chuck to find out the truth about what happened and to clear your name of any guilt. 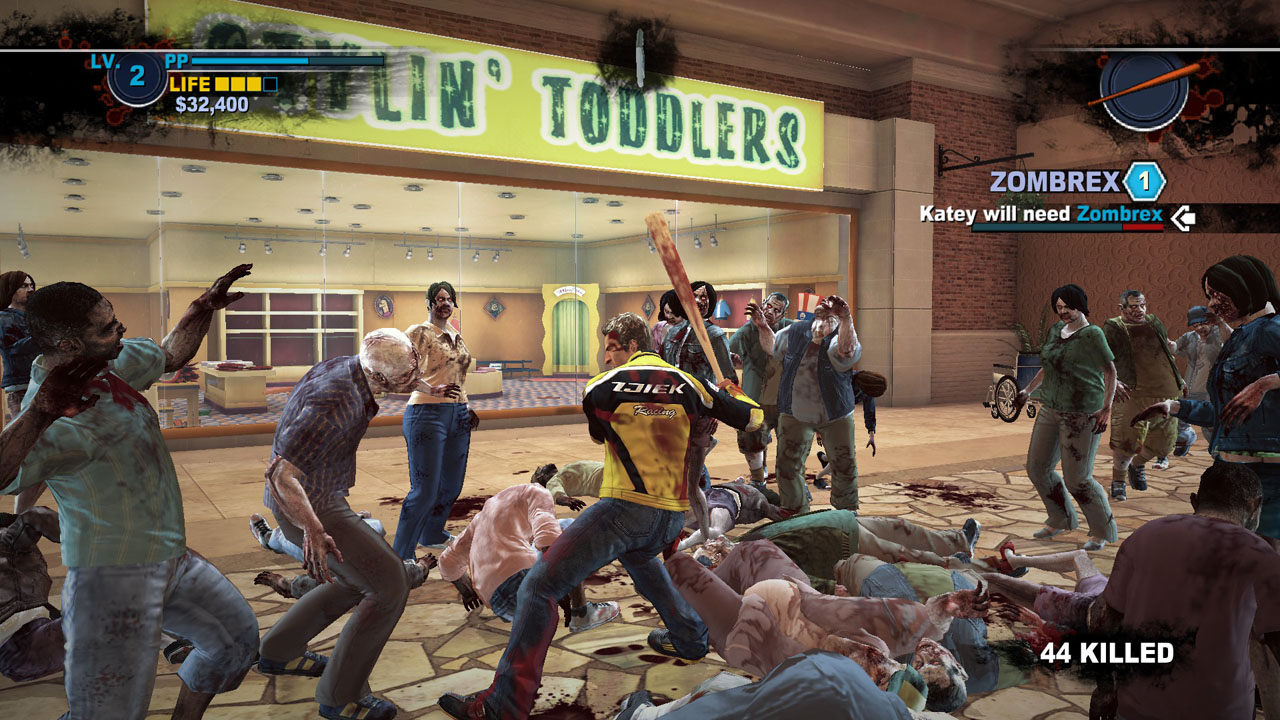 Dead Rising 2 follows its predecessor footsteps in including a timer; the timer basically counts down from 72 in game hours converting to seven and a half hours real time. This timer serves as the time Chuck has to reveal the truth before the military arrives to save everyone and arrest him. People disliked the timer in the original Dead Rising as it gave the player a sense of having to rush, but as can plainly be seen this added to the atmosphere of the game and gave it a unique feeling not felt in most games. The game makes up for this though by carrying over all skills and combo cards earned.

Speaking of combo cards, one of the main new mechanics added into Dead Rising 2 is the crafting system. After clearing the first mission Chuck is given access to maintenance rooms all over the map that allow the player to combine weapons into different weapons.  As you gain experience points and save survivors you will unlock combo cards that show what weapons can be combined together, you can just combine things and see what works but those will only give half the experience points per kill compared to those that you have the combo card of.  Another new mechanic which some did not enjoy, was needing to inject Chuck’s daughter with Zombrex every day between 7am and 8am. This can be quite aggravating when you’re doing something across the map and must now rush back to administer the shot to Katey. This becomes less annoying when you discover all the locations where Zombrex is hidden and time it so you’re close to Katey during the injection window. 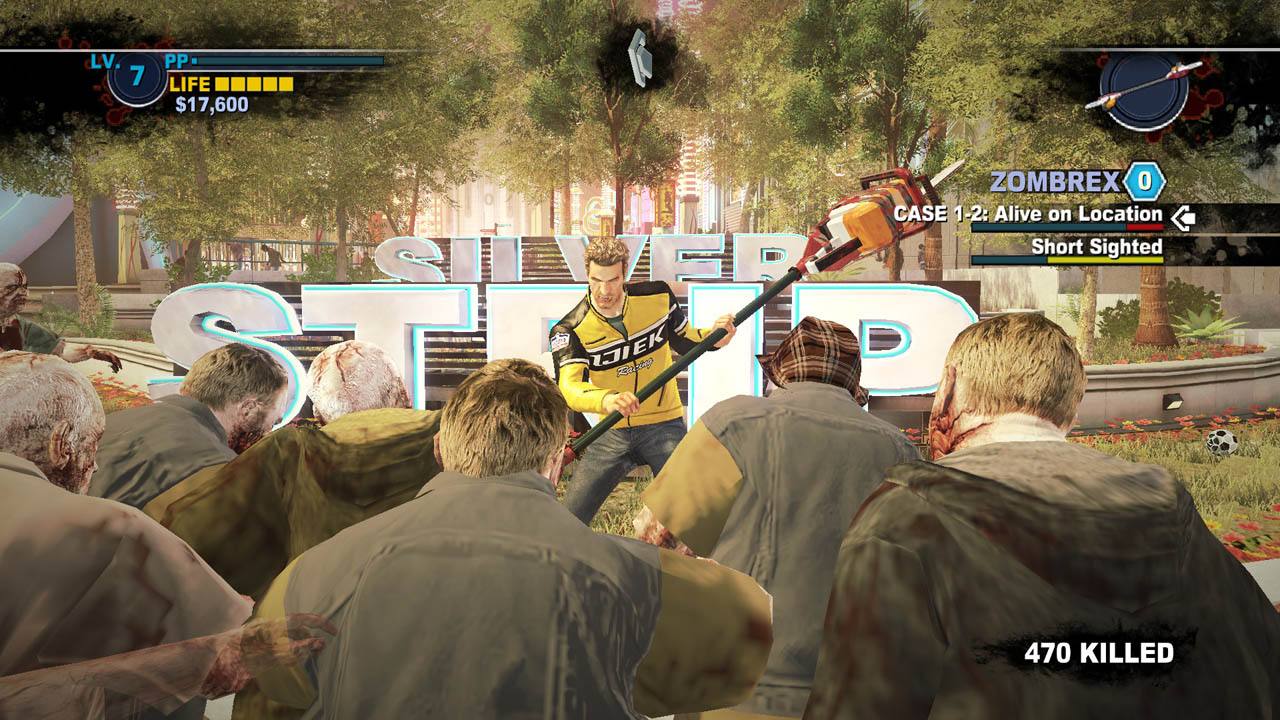 Also new in Dead Rising 2 is online multiplayer; which comes in two forms. One is being able to play through the whole story mode in co-op with another player. Two is Terror is Reality; where you face off against three other players in 9 different game modes. Each match consists of 4 rounds with the game mode randomly picked and always ends with a game Slicecycles the same game mode played at the start of the story mode. The co-op is a great addition since it can be pretty fun playing with a friend and exploring Fortune City and slicing zombies up, plus with a friend you can make short work of Psychos. Unfortunately Terror is Reality is dead with it taking upwards of an hour to play a single 5 round game, this is disappointing since the game modes are fun and there are trophies attached to the play of these modes. It would have been for the better if this game mode was available offline as well, allowing people to actually play them.

Even with these issues the overall package of Dead Rising 2 on next gen is definitely a great one. The game comes with a lengthy story mode which you can share with a friend through co-op and an online multiplayer mode for competing against others. With this new release the frames per second are locked at a smooth 60 fps with almost no drops. The graphics are also improved with a cleaner look but still not on par with current gen games. Overall it’s well worth revisiting Fortune City on your PS4.