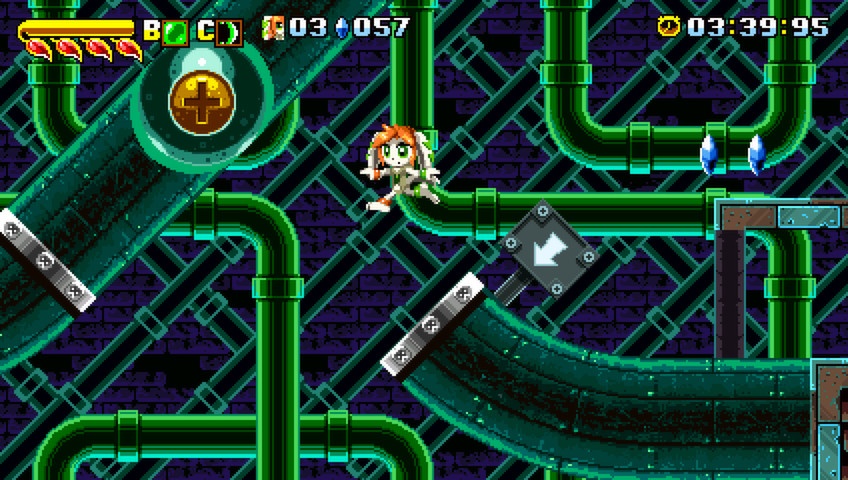 Making an indie title inspired by the early 90s classic ‘Sonic The Hedgehog’ is a risky business. It was the platform game with a focus on speed and momentum based physics that had never been pulled off so decadently before, and ultimately led to it being the biggest seller on the Sega Mega Drive system. So if Sonic was such a popular franchise at the time, where is the risk in trying to emulate its gameplay style? Well, you only have to look at the multitude of mascot titles that preceded it to realise that the Sonic formula is incredibly difficult to pull off.

Many games in the early 90s such as Awesome Possum, Bubsy the Bobcat and Aero the Acrobat all tried to capitalize on the success of Sonic. These fast paced mascot games would often be referred to as ‘Sonic clones’ within the media, in much the same way almost all of the early first person shooters were referred to as ‘Doom clones’. Unfortunately many of these titles (near enough all of them) have never been critical successes. The formula of the original Sonic trilogy was so perfectly balanced that not even Sega themselves have been able to create a 2D Sonic title since that has lived up to the original’s standard.

It’s been no secret that for the last decade the best place to go in order to find decent Sonic games has been the hacking and homebrew community. The original Sonic game has a dedicated following of tech savvy fans who have broken and rebuilt the original code time and time again. As such they’ve been able to create amazing alternative versions of the blue hedgehog’s adventures.

The reason I’m bringing all this up is because this is exactly how Freedom Planet started life. Originally envisaged as a Sonic fan game, it was later reworked and rebranded into something entirely new while still retaining the speed and platforming elements that Sonic is best known for. Loop the loops, running up walls and across ceilings, elemental shields, mechanical enemies, it’s all here in everything but name. So did Freedom Planet succeed where many other high profile game companies failed in the past? Were they able to create a decent Sonic clone?

The story of Freedom Planet revolves around an alien tyrant named Brevon, who has invaded a planet named Shuigang and assassinated their king in cold blood. Brevon’s goal is to rule the planet by placing the next prince in line to the thrown under his control. 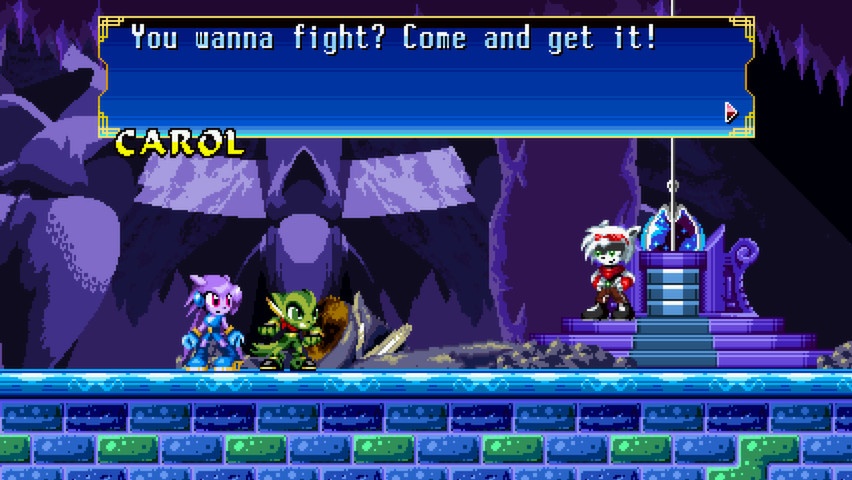 Enter Lilac and Carol, a dragon and a wildcat who stumble across this plot via a duck named Torque, whom they had rescued from a plane crash. Torque is the Ben Kenobi of the story and, although not a playable character, sticks by Lilac and her team throughout the adventure. On their journey to overthrow Brevon, Lilac and Carol discover a third protagonist in the form of a shy basset hound named Milla (an unlockable character that completes the playable trio).

Personally I didn’t think the plot was anything particularly special. Like most retro style games it’s basically just there for continuity. After a while I felt that the dialogue between stages was a bit of a drag, fortunately not only are you given the option to skip these cutscenes but you have the option of turning them off completely.

When you begin a new save profile you are given the option of two game modes. ‘Adventure’ which presents the game with all the cutscenes and dialogue intact, or ‘Classic’ mode where you can play all of the levels completely uninterrupted. For this review I played through the game in Adventure mode as I didn’t want to miss anything important, however I’m really grateful that the classic mode exists and will choose this option for future playthroughs.

In addition to the main game there is also the inclusion of a time attack mode where you can practice any level that you’ve previously beaten, providing you use the same character. There are also plenty of achievements (known here as badges) and collectable cards to find throughout the stages, so there’s a lot to do outside of beating the main game.

As far as the gameplay itself goes, Freedom Planet is classic Sonic the Hedgehog throughout, although with a few minor changes in mechanics. You have the choice of three characters that can all run and jump as standard, however each character has some special moves and unique abilities. Milla can spawn blocks and dig, Carol can roll and lunge and Lilac can do judo style chops with her tail and boost through the air as if she has a jet pack (think Rocket Knight Adventures). Overall I found Lilac to be the most versatile character as far as ability went.

I think on the whole Freedom Planet plays a bit slower than Sonic, although occasionally I can build up enough momentum to really get some serious speed going. This isn’t a problem as the stages are all really well constructed with unique elements in every level. There are ten stages in total which can last anywhere from 10 to 30 minutes each. I’m sure Freedom Planet is possible to beat in a single sitting once you’ve played it a few times, but I found it more comfortable in two lengthy sittings.

One element that I think really helps separate Freedom Planet from most Sonic clones is how it deals with enemy interaction and combat. A problem that a lot of fast games suffer from is the fact that by the time you notice an enemy on screen you’ve usually already bumped into them. This often leads to players getting knocked around a lot and can be very frustrating. However, in FP you are not penalized for touching the enemies themselves. Only their attacks can hurt you, which means it’s possible to run past an army of enemies and, providing you can dodge their melee or projectile attacks, you do not even need to engage them if it’s not worth your while. 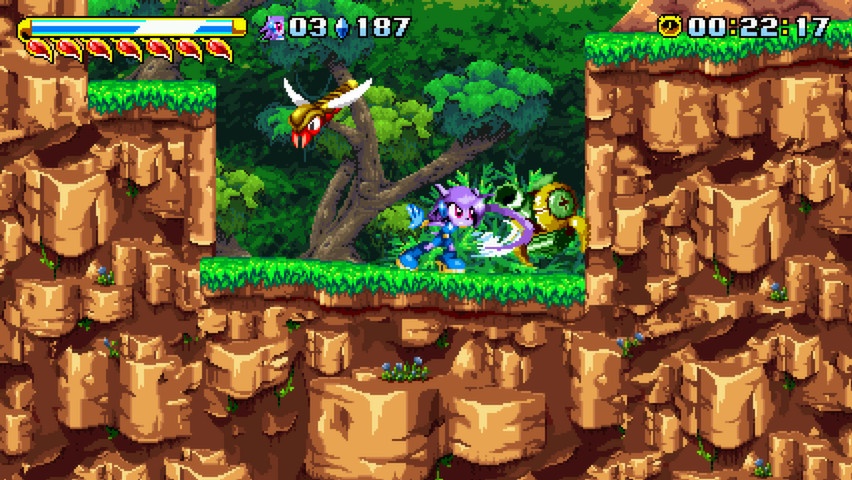 Speaking of combat, one area where I think FP really shines is boss battle design. The bosses here can be quite challenging, in fact I found that it’s here where the bulk of this game’s difficulty lies as the platforming stages are relatively breezy in comparison. Some of the fights are against other small creatures that are fast and athletic, and other battles are against huge monsters and battle ships that engulf the majority of the screen. These bosses do not give you easy opportunities to hit their weak spots, instead you have to be as fast as they are. You have to assess their patterns of attack and choose your moment to counter wisely. I also found that it paid off to not try and score too many hits at once. The more aggressively I fought, the more often I’d fail. Instead it’s better to endure the attacks for as long as possible, take your time and only attempt to hit the boss once before retreating to a safe spot. Many of these battles reminded me of other classic Sega franchises such as the aforementioned Rocket Knight Adventures, Ristar and Gunstar Heros.

The graphics in FP are pretty nice for the most part. Like Sonic, the game is presented in a 16 bit style with lovely smooth pixel animation and a wide range of colorful environments and enemies. I did notice that the quality of the textures dipped occasionally, with some paneling and backgrounds looking a little more lack luster than the rest of the game, but this is only a minor nitpick. I also noticed that Carol (being green) occasionally clashed with some of the stage scenery in outdoor / jungle type stages.

The sound is first rate, particularly the music which features some lovely melodies that stick with you even after playing. Even as I type I’m humming the main theme which plays when you collect an invincibility shield. All the music is synthesized but really suites the game’s retro tone. The soundtrack is available to purchase as a digital download and you can sample each song for yourself at https://galaxytrail.bandcamp.com/releases

The game controls like a dream. The WiiU version is compatible with both the gamepad and pro controller, and for such a fast game the inputs are really smooth and responsive. Freedom Planet handles just as a well as the game it’s based on.

I’ve been playing Freedom Planet for about three straight nights now and am happy to report that I haven’t noticed a single bug, glitch or crash. For an independent game that runs at this sort of speed this is quite an achievement. It’s very stable and has all the hallmarks of a good quality product.

In conclusion, Freedom Planet is a welcome addition to my WiiU collection. It’s a tremendous amount of fun and a very rare example of a Sonic style game that actually works. It’s vibrant, charming, family friendly, and has plenty on additional achievements to keep me busy for hours on end. It’s well worth the current retail price and I highly recommend giving it a go.

Freedom Planet is a welcome addition to my WiiU collection. It’s a tremendous amount of fun and a very rare example of a Sonic style game that actually works.