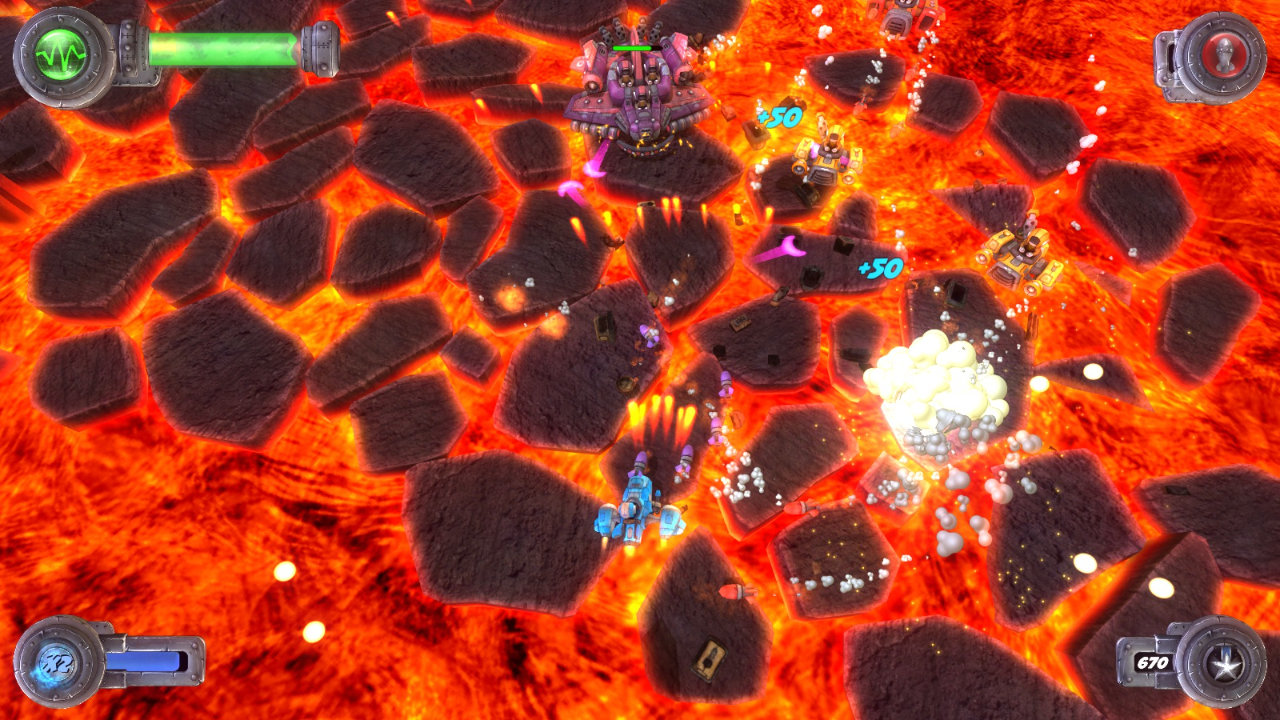 Blue Rider is a simple game in both premise and presentation. You have two options at the beginning, to start or to ask for help. Once you start you’ll be thrown in to the deep end. There’s no plot, there’s no reasoning behind your actions, you’re in a blue machine that shoots bullets, a blue machine which you ride, this must have been where the name Blue Rider was born.

Viewed from a top down perspective similar to Gradius or R-Type III you as Blue Rider have to make your way from one end of the level to the other shooting and dodging your way to the end level boss. The controls for Blue Rider are very easy, it’s a twin stick shooter so one is used for movement and the other for shooting. You have bombs that generate greater damage to the enemies and also a sprint function that can be used to speed through a level or dodge oncoming fire. Besides that there’s not much else to think about in Blue Rider, but that simplicity also helps to make it a reasonably fun game to play. 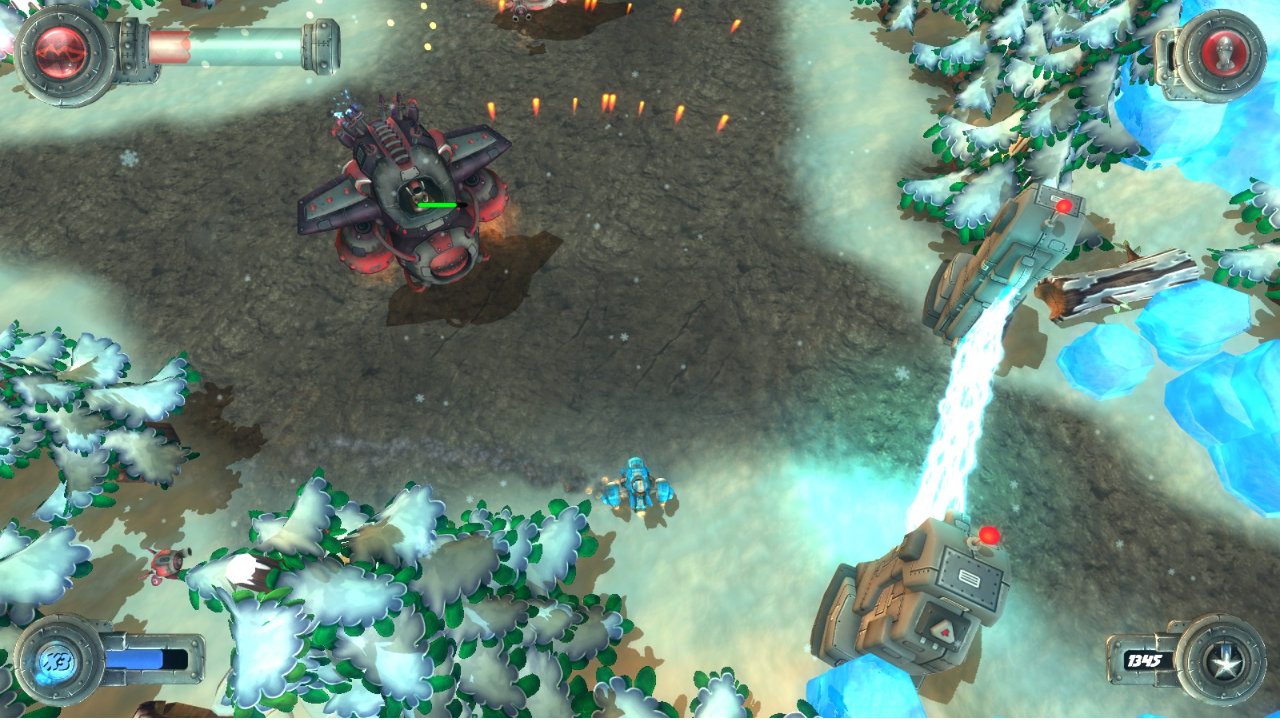 Difficulty wise Blue Ride has a fairly straightforward first level, even the end level boss from an attack point of view shouldn’t take too long to beat. After that initial introduction the next stages difficulty definitely ramps up a few levels, you’ll die a lot because unfortunately your health bar is quite small in relation to the amount of ammo coming your way. The end of level bosses also get a lot harder, for example in one stage you don’t only have to deal with the boss but also a rotation of turrets that should be destroyed before you concentrate on the boss again. Oh if you die you have to start again which means you’ll be replaying a lot. The enemies are a fairly diverse bunch of statutory or mobile set of mechanical shooters, some have one weapon to attack you with, some have two, some have three etc.

The ten or so stages are quite varied in feel and design, but it comes across as transitional which is something you wouldn’t expect in Blue Rider, as you progress from one stage to another there are subtle changes that give each level a different but familiar look. For Blue Rider to work the stages need to make you work so it doesn’t just end up as a free for all across a massive space or down a tunnel, luckily Blue Rider achieves with clever level design that requires you to sometimes go all guns blazing or tactically edge your way around a corner. There are some issues such as taking advantage of an enemies lack of movement, the old hide slightly behind an object and hit an exposed part of the enemy, the enemy doesn’t move and eventually succumbs to your limited but deadly attack. 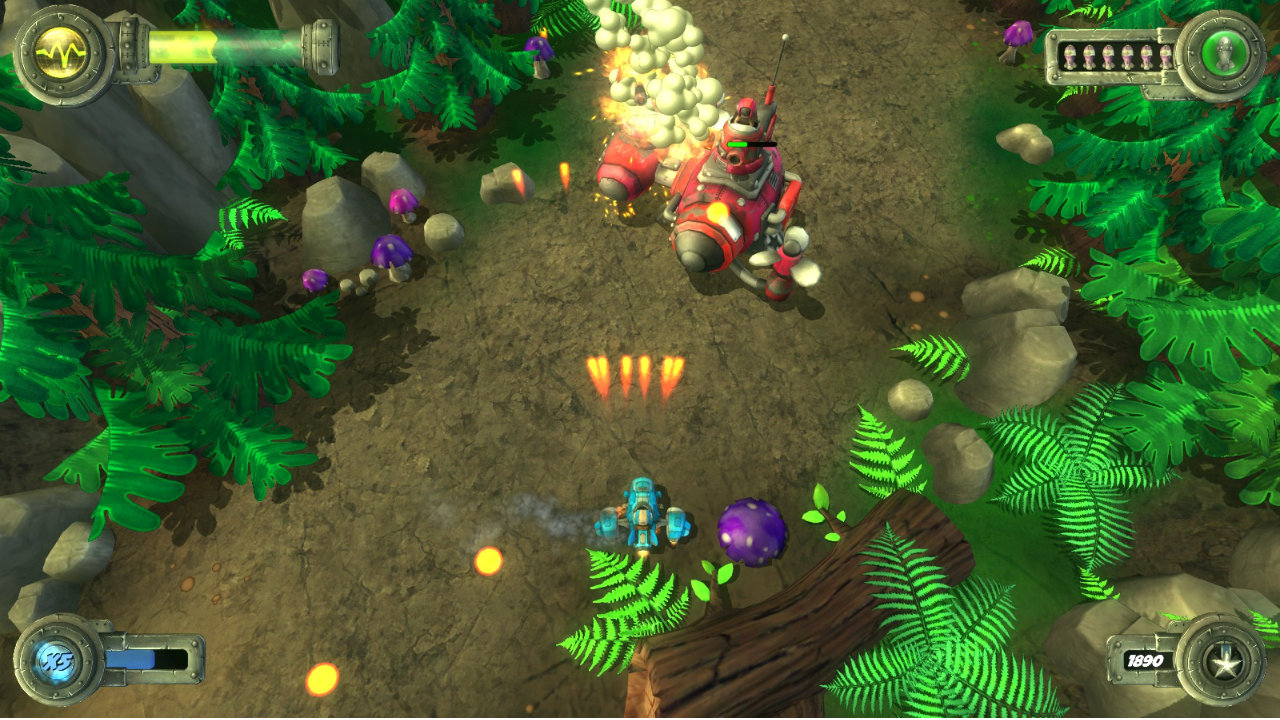 Blue Rider is easy to navigate around the levels, you never get stuck behind anything which can be an issue in this genre of games. You sometimes have to play the risk reward scenario as there are areas which are heavily guarded but hold valuable bonuses which will make you more powerful. There are a few weapon types available but it’s a shame you can’t scroll through weapons that you pick up. Thankfully you can replenish health which you’ll need to do a lot plus you can pick up relics along the way.

It’s always difficult to judge a game like Blue Rider, as a basic shoot em up it’s really enjoyable and fast paced but is it a game you would stop playing others for, I’d suggest not. Blue Rider is a fun but limited experience, it’s difficulty may frustrate a few gamers out there but at it’s core Blue Rider delivers as an entertaining frenetic title especially if you loved old school shoot-em-ups.