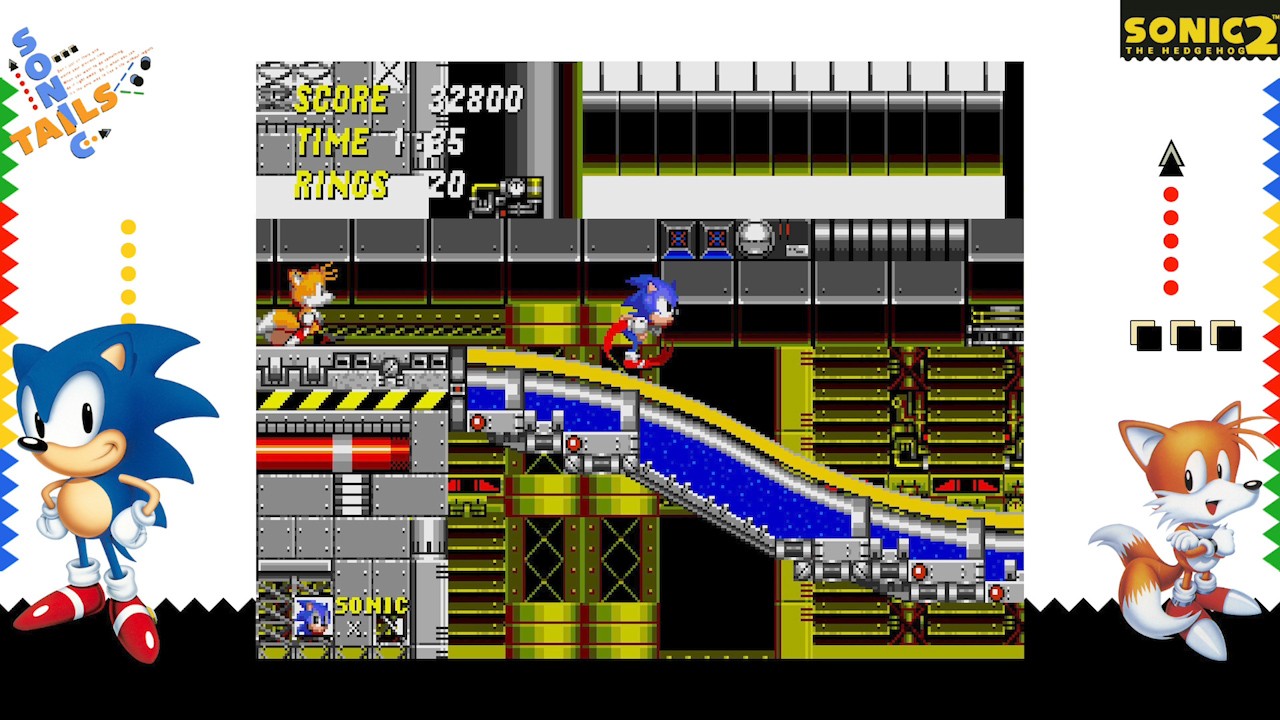 The console wars of the 90s are over, but were there any winners? One may argue that Nintendo triumphed over Sega as they’re still going strong in the hardware and software market; with the Mario clan as revered today as they were back then. While there’s a slight hint of bias from me, more in Nintendo’s camp than Sega’s, you can’t deny that Sega produced some of the most loved games and characters of the era, notably Sonic. In this review, we’ll be looking at Sega Ages Sonic The Hedgehog 2, by M2.

While my friends were all crowded around the Mega Drive attempting to get the fastest times on Sonic, I was around my girlfriend’s house playing the SNES and games like Super Mario All-Stars. There’s a distinct difference between the two platforms; one that reminds me a little of the Oasis and Blur allegiances. I opted for the latter, but in later years, Oasis felt like the way to go. Now, an alleged grown-up, I do still prefer the Nintendo eco-system, but Sega games felt sharper. Sonic The Hedgehog 2 took that step further for creating a character synonymous with speed.

If your introduction to Sonic The Hedgehog has been initiated by a recent cinema visit and you know nothing about him, here’s the skinny. You play Sonic, obviously, and race in a 2D environment freeing up animals that have been imprisoned by your nemesis, Dr Robotnik. It’s a typical platform game of collecting goodies, jumping on enemies and avoiding spikes, though Sonic’s selling point was, and still is, his speed. While Mario is again pulling up his dungarees, Sonic is at the other end of the forest scratching at his own spikes. In some ways, Sonic was the Wipeout of platforming, and to this day, it still feels very fast playing it. As for the plot, it’s run-of-the-mill: nemesis taking the local folk hostage, harvesting all the resources (chaos emeralds) so that he, Dr Robotnik, can build a devastating weapon called the Death Egg. Only Sonic can defeat him, with a couple of accomplices in tow. 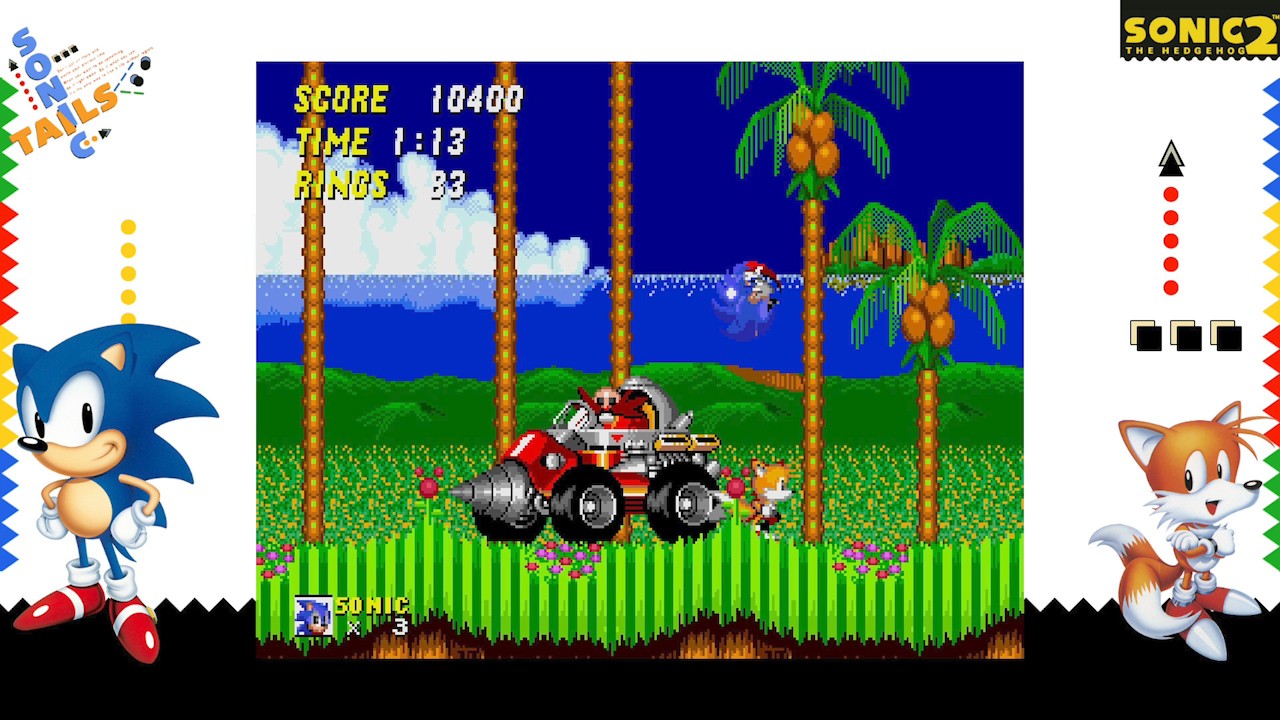 In this adventure, we’re introduced to Tails the fox, and he follows you like a bad smell. He doesn’t get in your way at any stage, often playing catch up to Sonic’s blistering speed but he does help with battling bosses as he’s almost like a tracer to Sonic, performing the same moves. Jump on Robotnik (forget this Eggman nonsense), and Tails will repeat the action, making it feel like a tag team made in heaven. This setup works well, but there’s also the option of having a pal pick up the controller and take control of fantastic Mr Fox.

Sega Ages Sonic The Hedgehog 2 is the same as its predecessor in that you collect rings to earn points, but also as a buffer for survival. If you get hit by an enemy or land on something pointy that isn’t blue, all the rings will fall to the ground, and you have to try to pick them up again, only, you’ll get a small percentage of what you were previously carrying. If you are hit without holding any rings, it’s death, then back to the nearest checkpoint. Additionally, Sonic only has a certain amount of lives to play with. You can earn more through points or collect them as you go, but lives are pretty limited.

Ok, so for those new to the series, that’s what it’s loosely about. For everyone else who’s played Sonic The Hedgehog 2, what makes this so different on the Switch? Firstly, it’s portable and plays just as well, if not better, than the original title on the Sega Mega Drive. Next up is the inclusion of two games. Kind of. The second title is still Sonic The Hedgehog 2; only you play as Knuckles, a red echidna and not a red version of Sonic. Knuckles has a bit of a chip on his shoulder, but is hard as nails, can hover in a Superman-like pose and freestyle mountain climb that would make Link blush. It’s the same game, only a different character, but no Tails, and has a separate selection from the menu.

The controls are tight, and this is a perfect port. It has to be addressed that the button mapping is a little weird for the menu as the X button represents pause. I found this out as I was repeatedly pressing it, thinking that the game had crashed. As a purist, the d-pad offers better control, arguably, though the analogue sticks can be used as well to control any of the characters. There’s nothing complicated about Sonic – just run and jump, but there is the Drop Dash from Sonic Mania added; where you can transition into a spin after a jump to keep up the momentum. 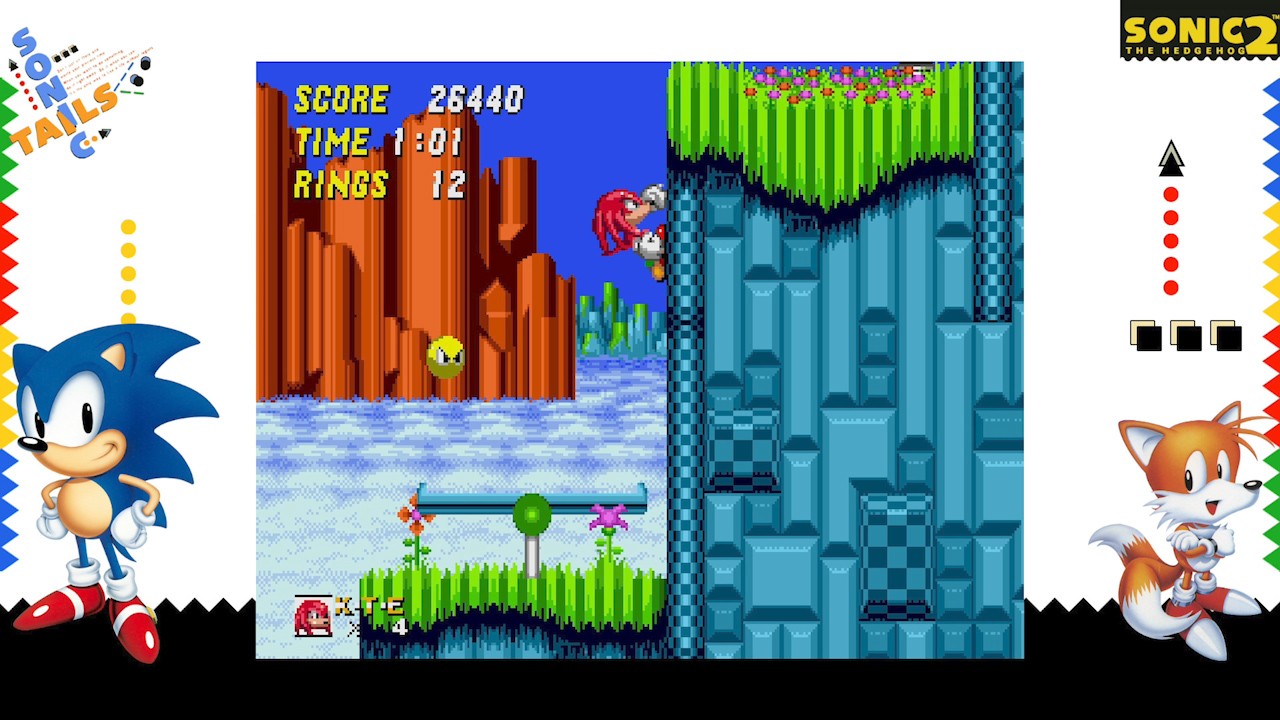 When Sonic The Hedgehog 2 was released, widescreen wasn’t an option, nor was HD quality imagery. On that basis, the gameplay window is played at a 4:3 ratio with a bezel screen featuring the game art. It’s authentic other than the bezel, and as a result, bears the closest resemblance to the original, if not better. However, in this day and age, having a widescreen option might have been worth doing – even if purists would moan about it, you always have a choice. I could happily place this on the Game Gear, so a reduced play area doesn’t bother me at all as the gameplay is there. After a few spins into the first stage, you forget about it as Sega Ages Sonic The Hedgehog 2 feels as authentic to the original, only with a few extras.

One of the standout points is being able to save at the press of the button. This is a big deal as there was never the option on the original system. Bear in mind, you can only save one at a time, so not like you have a fallback of multiple attempts. There’s also a manual. For those of you studying gaming history, we used to get a massive booklet in all the game boxes, telling you a backstory, the controls and about a billion different translations. A lot of retro gamers miss this, so it’s nice to see the addition on the menu screen, albeit, we never really looked at the manual for instructions and instead would wing it.

Another modern feature is the online ranking option where you can compete in a series of challenges and hi-scores. Much like Sega Ages Virtua Racing, also by M2, there is an online leaderboard to compare against other players and has the same feature of being able to replay their data. One of the challenges is to obtain 100 rings as fast as you can. At the time of writing, the top performer completed this in 22 seconds – heaps better than my 46 seconds attempt. That’s actually a lie – it was over a minute, and I’m not going on record to say how bad I am at these challenges. It’s a nice addition though if you feel you’ve mastered this title after all these years.

Whether it be for nostalgic purposes or if you’re just a fan of platform classics, Sega Ages Sonic the Hedgehog 2 is a worthy addition for any fan. Other than a few additional features, it doesn’t give the game a complete overhaul and remains very much the same title that was released all those years ago, though this time, on the Nintendo Switch.