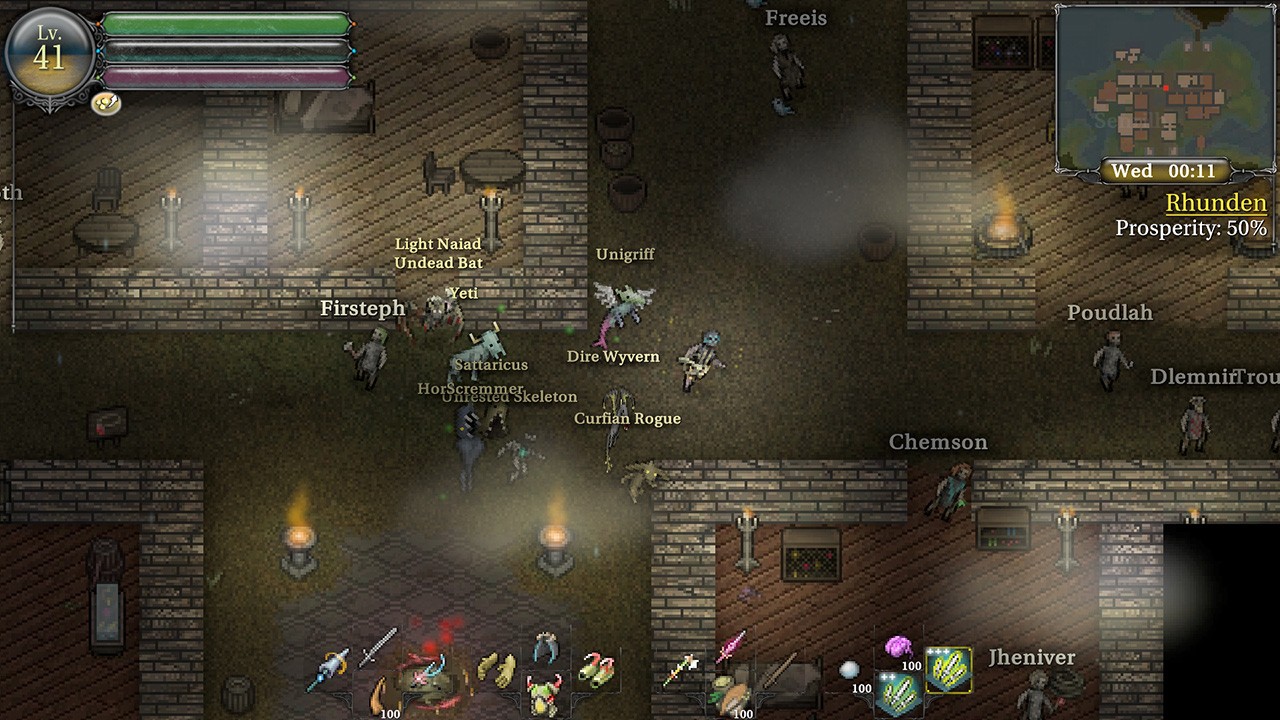 9th Dawn III: Shadow of Erthil is a 2D action RPG set in an open world. It’s the kind of game where you’ve fought rats, bats, and spiders (the RPG starting trifecta) within the first hour and will probably have gotten your ass kicked while innocently exploring. It’s the kind of game where you can cook, smelt, smith, fish, and brew potions–your very own self-sustained adventurer. It’s the kind of game where every NPC will have a quest for you, and sometimes those simple requests spiral into a multi-part affair that has you travelling well beyond what’s familiar. Because of its “old school” nature, 9th Dawn III: Shadow of Erthil will either inspire feelings of nostalgia as you power through the pain, lock you into the “get gud” struggle or… it’ll make you rage quit. This RPG has a mean streak, and it isn’t afraid to kick you while you’re down.

I was surprised to see that 9th Dawn III: Shadow of Erthil is also available in the app store—mostly because the controller inputs work so well for it. You move your character with the left stick, attack by tilting the right stick in the appropriate direction, and access any of a whopping 16 hot keyed skills or items by holding R2/L2 and a corresponding face button. You can also dodge roll using B. Though you can equip a main item and an offhand item which can be another weapon or a shield, there’s no option to block, which I would have preferred over the lacklustre dodge which often isn’t effective in evading enemy attacks.

The majority of time in 9th Dawn III: Shadow of Erthil will be spent slaying monsters that run the gauntlet from rats and common garden snakes to the undead and walking skeletons to larger, scalier beasts. Above ground and below it, there are scores of enemies to shoot and chests and breakable objects to loot. Much of the time, it will be you versus a wave of enemies, which leads me to wonder how sustainable the ecology of this fantasy world could possibly be when there is something like a hundred bats per cave. Enemies also respawn the moment you leave, so if you happen to accidentally leave or enter a dungeon or building before you’re ready, prepare yourself to grind through the hell that you’d just clawed your way out of. As I gained levels, I had less of an issue with mobs and more of an issue with random difficulty spikes. My character used heavy armour and a shield and I sank plenty of points into endurance, yet I still felt like I was melting when it came to particular enemies. Also of note is the unfair advantage any enemy with a ranged attack has over your melee character, as they’ll halve your health before you’ve even made it into striking range. Most enemies have a ranged attack of some sort at their disposal and, suddenly, the spiders that weren’t denting my armour before can sling a ball of energy that hits like a truck. 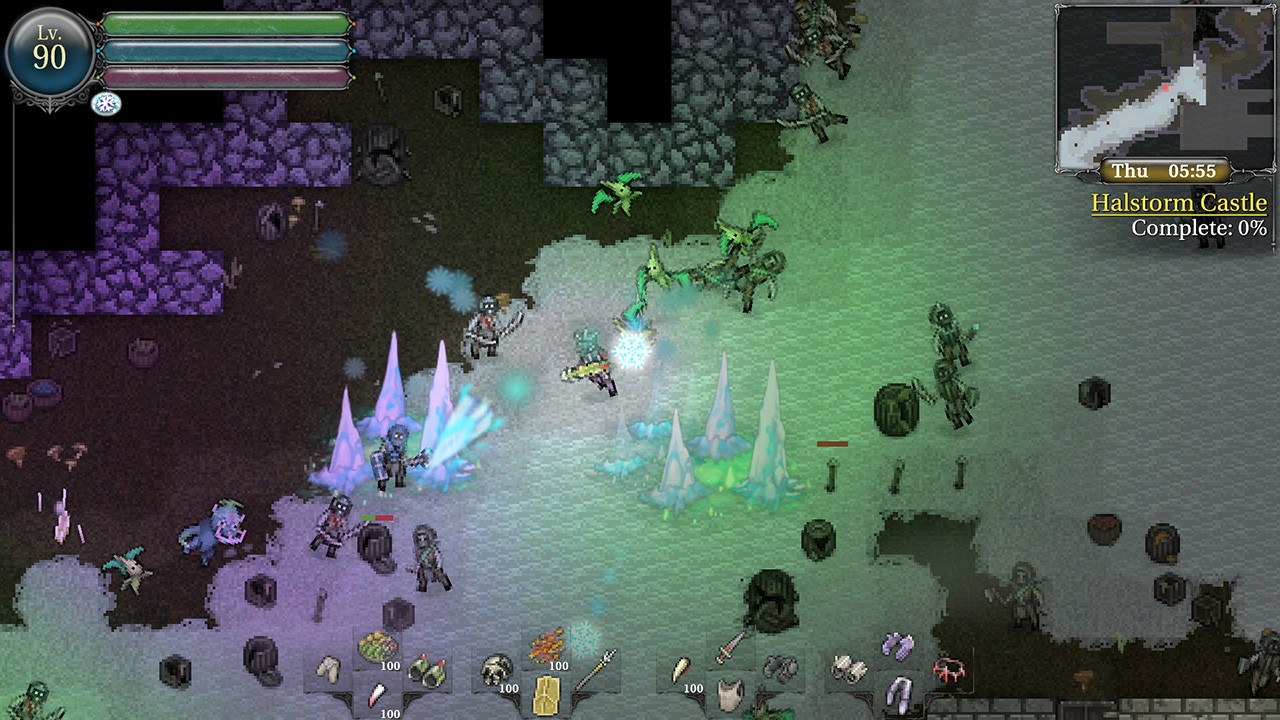 The experience gained from killing enemies’ levels up your character, upon which you get five attribute points to distribute to strength, dexterity, endurance, intelligence, and wisdom–all of which allow you to build your character to suit your play style. Want a mage? Put points in wisdom. Want a hardy tank type warrior? Put points into endurance. If you fall in combat, you lose experience, which is a setback, but not the end of the world. Abilities, which are the active skills like magic and special attacks, are learned via tokens which can be found by exploring the world. On one hand, I liked this style of ability acquisition because it encouraged me to explore every bit of the world, but on the other it also made character development drag a bit because of how the numbers are stacked against you when you enter a dungeon where these tokens tend to linger. As a result, I spent a lot of time grinding levels in order to have enough strength to take on the masses of enemies within a dungeon for one measly ability token, which would pay for an ability that wasn’t particularly powerful because the better abilities require multiple tokens. Dungeons are huge, sprawling affairs that take thirty plus minutes to clear completely, adding to the feeling of sluggish progression.

Travelling in 9th Dawn III: Shadow of Erthil is done mostly on foot. You can fast travel, but it’s a fairly expensive venture, especially early on. The mini map is pixelated, per the old school delivery, but unfortunately that limits the clarity of the information provided. Though there’s colour contrast to indicate differences in terrain, it is still difficult to navigate pathways, and I often wandered in circles or into dead ends while exploring the labyrinth dungeons. What’s more, the full size map has no zoom function and there’s also no ability to set waypoints.

To supplement whatever warrior class you decide upon, you can also learn to craft your own gear. This includes armour and weapon smithing, smelting, weaving, and the like, which allows you to outfit your character. there are other crafts like cooking, fishing, and alchemy that allows you to create dishes and potions that will keep you hale and hearty while in combat. Crafting must be done at the appropriate station, and each has a mini game wherein your button inputs affect how well crafting goes. The ultimate deciding factor, however, is your skill level, which can be increased by attempting various crafts—whether or not you’re successful. The initial investment in order to even successfully craft the most basic recipe available to you is enormous; I was level 13 in cooking, but I still didn’t have even a 20% chance of success for the very first recipe. I could understand if it started at 25% and went up from there as I gained skill levels, but to start at exactly zero chance of success and to have that chance increase by such tiny increments did not give me the slightest feeling of accomplishment. 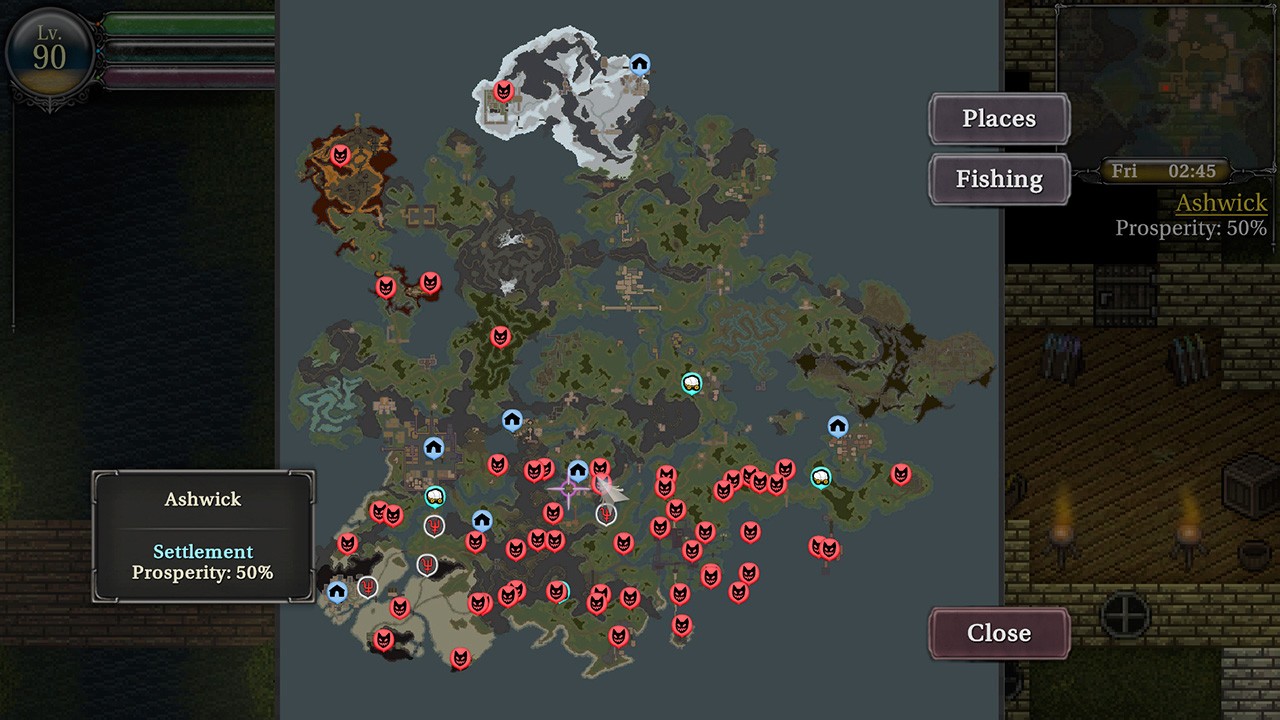 There is a host of skills that can be leveled up continually, simply by dealing or taking damage, including specific weapons, armour, and spell types. The more you utilize your skills, the more potent they’ll become. In some cases, you have to meet specific parameters in order to equip higher level pieces of equipment and so using the types of armour and weapons you’re most comfortable with is rewarding. On the other hand, this system can make trying out different types of equipment a pain as you’ll have to start from square one with very basic pieces if you decide you don’t like, say, heavy armour and want to try light armour instead.

You can recruit monsters to fight alongside you, which is one of the selling points listed on 9th Dawn III: Shadow of Erthil‘s store page. Doing so requires traps and bait; while your monster rearing skill is at lower levels, you can only recruit small critters, but as you ascend the ranks, you can have bigger and badder beasties at your side. There are over 200 possible creature companions, which may appeal to those who live by the “gotta catch’ em all” motto. I personally found taming monsters to be too great an investment. Bait and traps are expensive, and it takes quite a lot of both to capture a single rat at low levels. Gaining more skill levels to lessen the amount of bait and traps needed to successfully tame a monster requires you to tame and fight alongside one in the first place, but the weak critters that are available to you die quickly so dragging them along for the ride becomes an imposition. Maybe it gets better later on, but I found it was better to battle solo.

Finally, there’s a card game called Fyue, which follows the same rules of Final Fantasy IX’s Tetra Master. You and your opponent take turns playing with a deck of 10 cards, attempting to flip the enemy’s cards by playing the card with the higher number. You can challenge anyone within the world and, the cool part is a victory means you get to choose one of their cards. By doing so, you’re able to fill out your card collection from a total of 180 different kinds.

I’m on the fence as far as a score for 9th Dawn III: Shadow of Erthil. Did I enjoy my time with it? Yes. Did I also get frustrated and have to put it down for a little while? Yes. You’ll certainly get dozens of hours of content from this purchase, but that’s highly reliant on your willingness to grind and your ability to get back up again when you’re pushed down—not by anything related to your skill level, but by game design that is wholly out of your control. While 9th Dawn III: Shadow of Erthil provides a fun experience, there are several balance aspects that could use some tweaking in order to streamline gameplay and make it more accessible. Arguably, the game plays the way it does, but “old school” isn’t an excuse not to make the improvements our modern day knowledge of video games has brought to the forefront.

If you’re an old school gamer, 9th Dawn III: Shadow of Erthil’s aesthetic, gameplay, and level of challenge will speak to you.