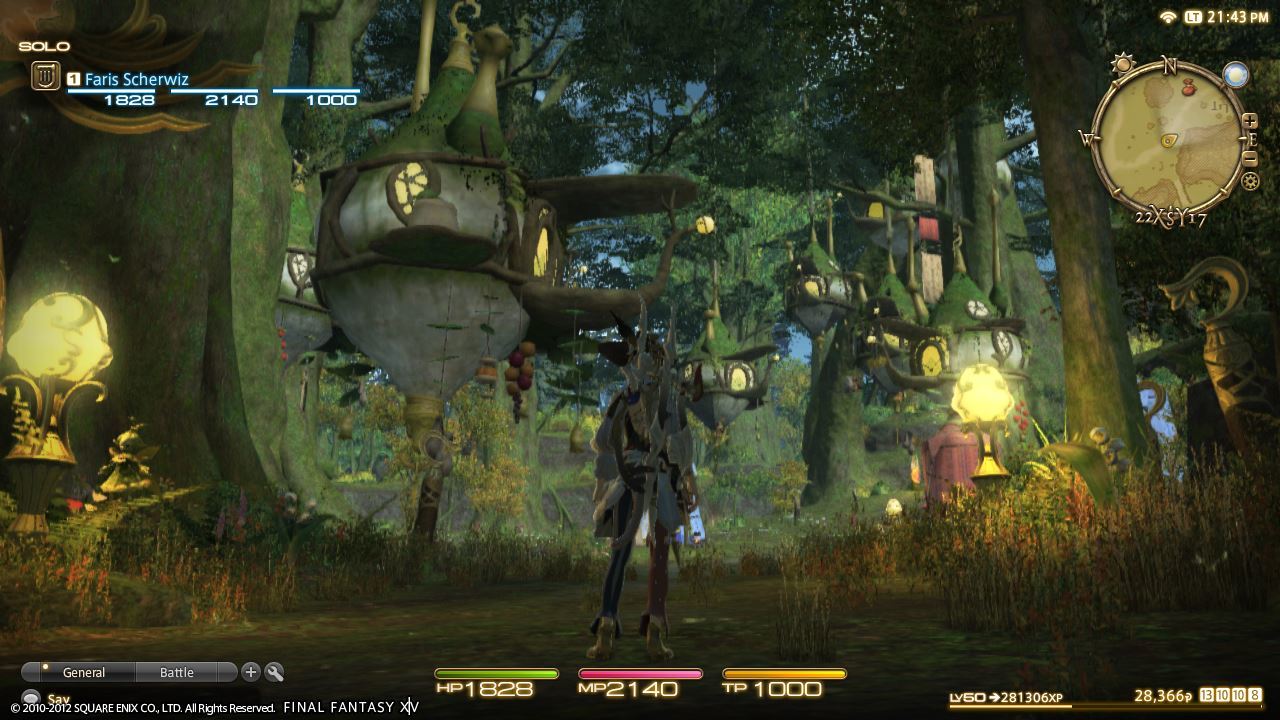 The massive franchise Final Fantasy has once again attempted to dive into new depths. By taking on the MMORPG genre. We all know by now that the Original FFXIV was a disaster, So Square Enix decided to pull the plug on it and wipe the slate clean (literally) By wiping out the world and everyone In it (all playable characters).

It took Square Enix Three Years but A Realm Reborn is everything the original should have been. I joined the game at the launch of the title on PC in 2013 and I am still playing it to this very day! The game throws you in as a new adventurer looking for work. However as the story progress’s you become more than just any ordinary adventurer, you become a Hero.

Speaking of your Hero you can customize your character as you see fit. There are many different races and you of course can be male or female. Hairstyles are a little disappointing though and I am hoping Square Enix add some more soon. The story In all honestly isn’t gripping by any means but it does a good enough job to make you want to see how it ends originally until it was expanded with patches. Normally you don’t play these kinds of games for the Story anyway.

The game itself doesn’t really get started until you reach level 16 and go into your first dungeon with 4 other players. Before this you just find yourself trying to level up as fast as possible and obtain new gear. Players consist of Two DPS, One Tank and of course One Healer unless it’s a Raid then its 8 players per group. Now in order to get into these dungeons you must enter the Duty Finder and here’s where the problem is. It’s Incredibly annoying having to wait 20 odd minutes just to do your daily dungeon or fight that boss you need to kill in order to progress with the. Square Enix have tried to counter this by rewarding old players with more Tokens by way of doing daily rewards as a bonus for helping new players clear the Instance.

Once you reach level 50 and complete the end game you start to progress onto what’s called your Item Level. This goes by the equipment you are wearing, of course. Certain Raids, Dungeons and other activates require you to be a certain Item level and In order to attain that Item level you must Grind to get new Tokens or Money to buy better Equipment. There’s something for all types of players here too. Hardcode players will massively enjoy the Raids and Extreme difficulty Primal’s. The only problem again is the Duty Finder. You can get lumped with some people who just don’t know what they are doing and usually it ends with everyone quitting and people been nasty. Casual Players are free to do as they wish and whenever they feel brave enough or ready to take on a new challenge they can. 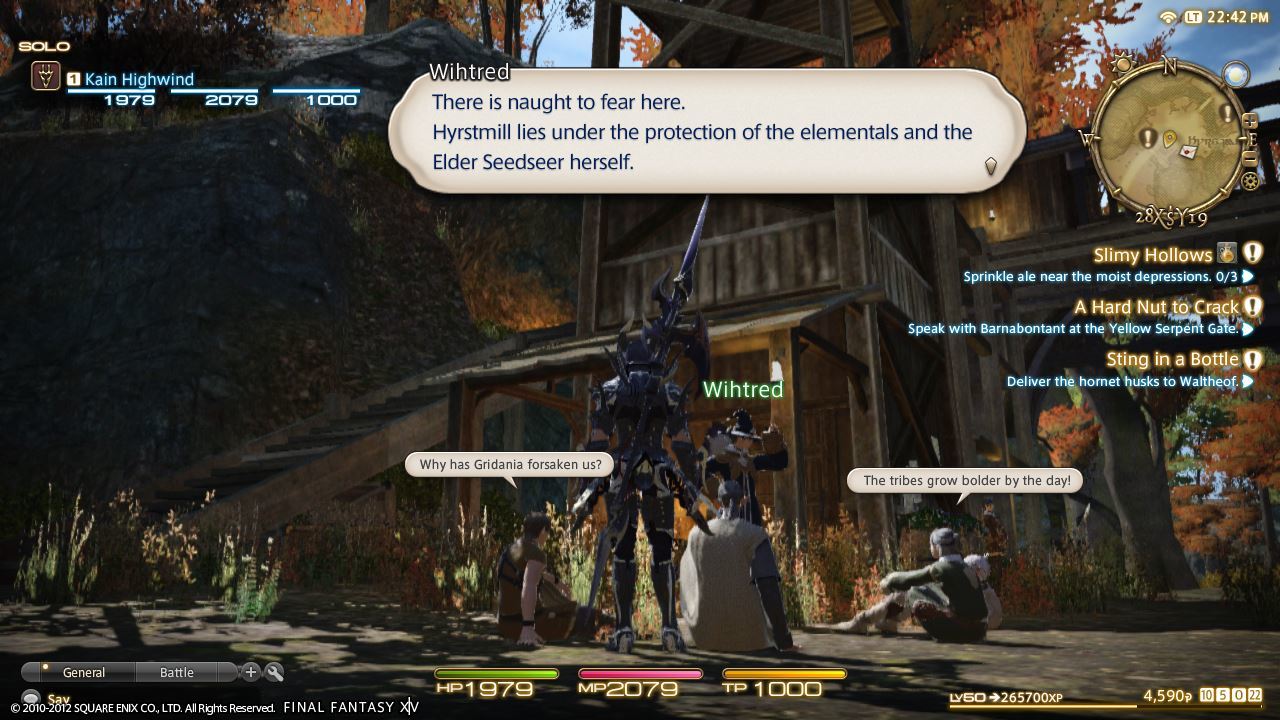 This is where the Free Companies come in. The Free Company is very much like a Guild. Help each other and make new friends. I have met some awesome people In my Free Company and honestly can say it’s that more than anything that makes me come back to the game again and again. We arrange days to Raid certain dungeons, help people get past content they are stuck on and genuinely sometimes just have a nice chat in the company house and chill out.

The game has many classes too. You start off as sub classes but the Ultimate goal is to attain a job. Jobs are like two classes rolled into one and In order to achieve this you must be level 30 in your main class and level 15 in your sub class.

Ranged characters can be a Bard, Black Mage or a Summoner. Bards use their voice to aid allies and inflict buffs and replenish Magic or TP. Black Mage’s are the damage dealers, they can do AOE’s (attacks that do damage to All of Enemies) however they are pretty slow and cast times can be a real pain. Summoners as you would of guessed summon Primal’s to their Aid to fight alongside them.

Tanks can be either a Paladin or a Marauder. Paladin’s go for the traditional sword and shield approach don’t usually have as much Hit points as a Marauder but of course have higher Defence than its rival. Marauder’s Tend to do more damage have higher HP but less defence. Healing Is not as boring as you would expect it to be. I was pretty nervous about becoming a Healer, and In the later dungeons you really have to be on your toes in order to make it through the amount of hate a bad Healer gets is unreal. The game throws new things at you all the time to test your healing capabilities and speed of which your team work at. The last thing we move onto In the fighting class department is the Melee players. These Include the newly added Ninja class, Pugilist and Dragoon. Ninjas are all about Dexterity. Moving around all over the place hacking and slashing everything. Pugilists let the fists do the talking and Dragoon’s are really strong and by far the most hated class In the game for stealing Agro.

Agro acts as the mobs hate. The more Agro you have the more likely you are to be attacked. Countless times when I have been a tank I have had a Dragoon steal Agro from me and die due to it. You would be amazed how sour people can get when this happens. Speaking of people turning Nasty too many times I have encountered this and I wish Square would do something to cut it out, everyone is a real person and they all have feelings. 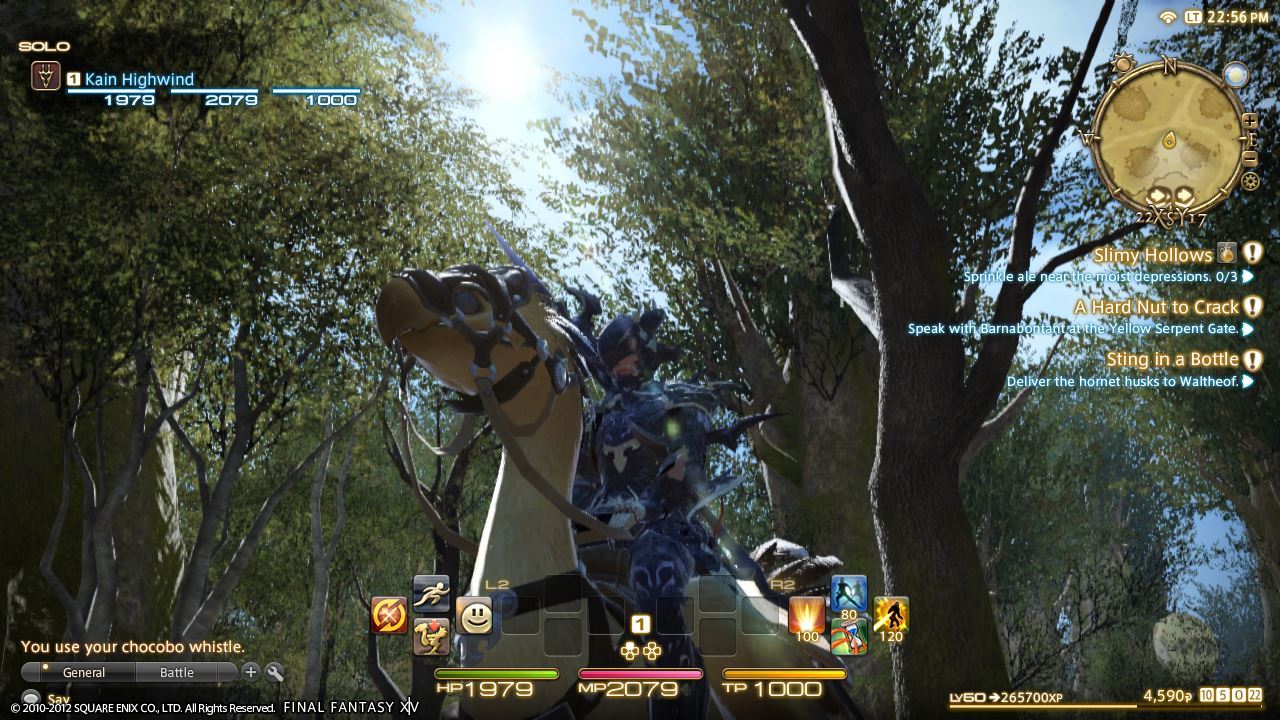 Now I come to the best bit. You are not tied at all to one class. If you decide that you want to change, you can later In the game. This means you can also choose to do another class after you reach level 50. I found myself a lot more useful for other players when I could DPS Heal or Tank dungeons to help other players. Of course getting to level 50 after you have completed all the story quests and obtained the experience from them all is a massive grind and you will find yourself going through a lot of trouble to get there again. I have done it three times now and I intend to do it again soon for Ninja.

As I said previously, fighting is not the only thing you can do in the game. You could decide to be a crafter, miner, or gardener there is something for everyone and for every mood. It’s a nice change of pace when you get bored and fed up of farming and grinding the same things over and over. Also recently added is the ability to train and change the colour of your Chocobo. For people New to Final Fantasy, Chocobos are cute yellow birds that you ride on as mounts. They do also fight with you in battle as a companion and you can train them to be what you want. Square Enix have also promised a whole lot more Including the Infamous Gold Saucer from Final Fantasy VII and Marriages to other players.

There’s so much content In this game it’s impossible to mention it all and Square Enix are always adding more every month. With the Expansion now confirmed with a whole new class (Dark Knight) I would say that FFXIV ARR Is very much worth your time and money, and warrants the monthly payment. The game requires a lot of time and effort, but if you are willing to put up with the grinds and Duty Finder this truly is worth every penny. It may not be for everyone but Casual and Hardcore MMO players should love this.