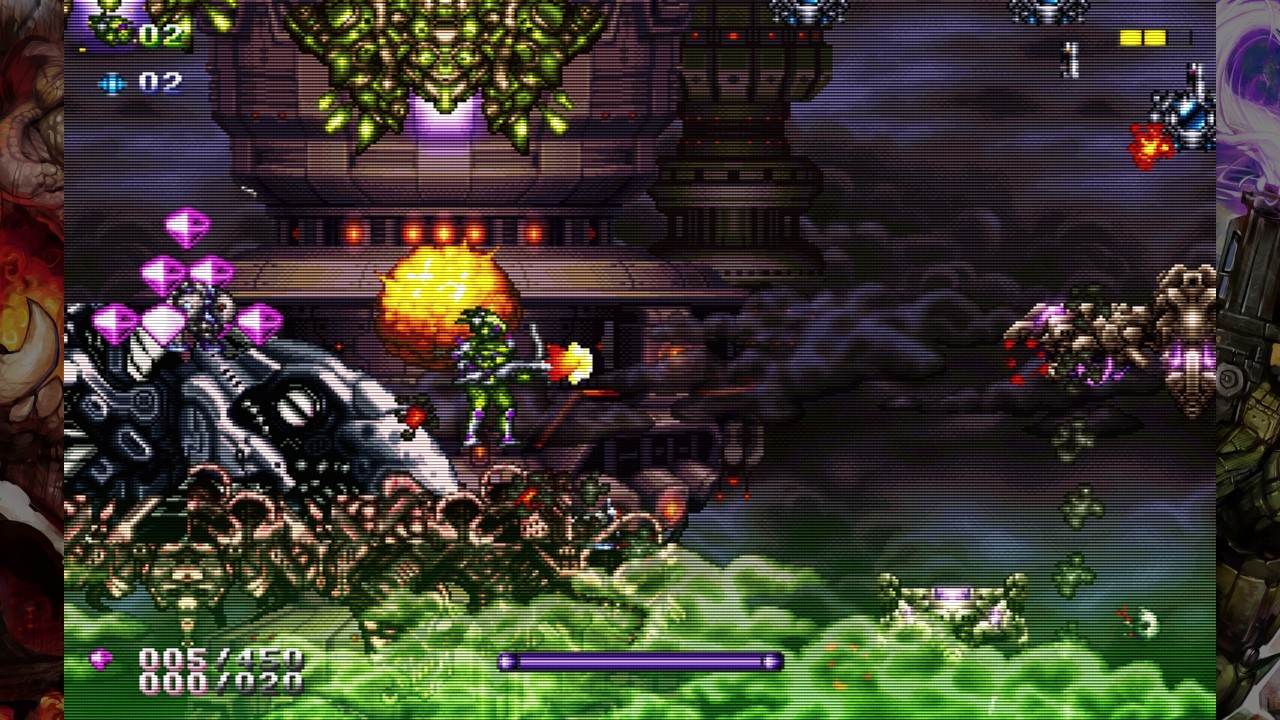 Retro fans of old are in for a treat with Gunlord X. If you’re familiar with Turrican, then this could be your next purchase on the PS4 as it might as well be a port from the past. From the scanlines, sprite animation and soundtrack, this is a clear reworking of what worked well for this sort of game in the 90s, and it’s a worthy addition if that sounds like your thing.

After a brief story sequence setting up the forgettable story, your character is thrust into the action straight away. It was genuinely exciting to find that the minute I fired my gun in the air, hidden platforms appeared that allow you to leapfrog to one another while collecting the power-ups in the process. There’s no waiting for any decent sort of weapon either as within the first five minutes; I went through a selection that would put Turok to shame. Ok, that’s an exaggeration – the guns in Turok would take out a planet.

The muscle memory from Turrican 2 and similar kicked in from the outset, and with the left stick I could aim in eight different directions (down only when jumping), with said jump being the X button. With triangle, you roll up into a ball and dash around the levels pretty quick in an armadillo-type shell, but it uses up an energy gauge at the bottom of the screen. This refills after you use it, and as a retro game, there’s no cooldown, as such. Scratch that – it’s an old school cooldown as you still have to wait. 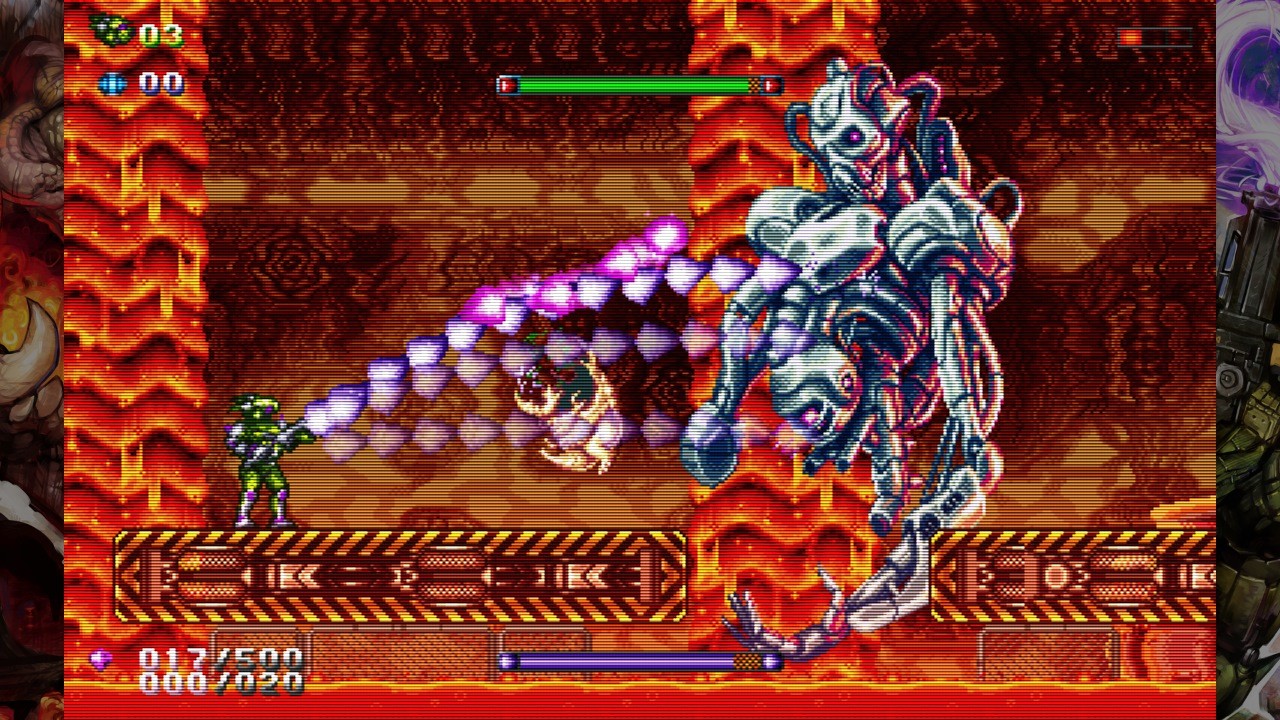 As there were no tutorials (who needs them?), I didn’t realise the function of the right stick as hit it in error. As the aim is already covered by the left stick, with the right stick, you shoot out a beam, wiping out everything in your path. Again, it dips into the gauge at the bottom of the screen. Finally, there’s a sideflash that can be activated with the circle button which fires left and right at anything on-screen, only beware that it has limited use.

The colour palette does create a few problems when trying to decipher what’s on-screen. With Turrican, it was greys, blues and reds, but Gunlord X is very green and purple. Your character is like Predator when standing in vegetation, as quite hard to see, which is a shame as the sprites in the game are excellent. This also applies to the hand-drawn backgrounds and assets. A lot of the statues and structures you encounter look like its straight out of a Psygnosis game such as Shadow of the Beast. Scanlines really do make it all more worthwhile in terms of aesthetics, but if that’s not your thing, you can remove the filter in the menu, along with setting a wallpaper and the vertical scale of the screen.

Levels in Gunlord X are pretty large with plenty to explore for a 2D action platformer. When you do eventually make a decent amount of progress in a level, you’ll reach one of the bosses. While they aren’t as big as those in Shadow of the Colossus, they take up a lot of the screen and take plenty of hits. Of course, they hit pretty hard, but if you have the patience to learn their patterns, they are beatable, though it won’t be easy. You can come back to areas to improve on your score and all, but the caveat is you have to beat the level first. There are about a dozen levels in total, and they’ll certainly keep you busy with apparently 60+ enemies, but the bulk of them are quite forgettable, and you can’t distinguish them from one another. That mostly applies to the smaller enemies more than the larger ones; which are naturally, very cool. 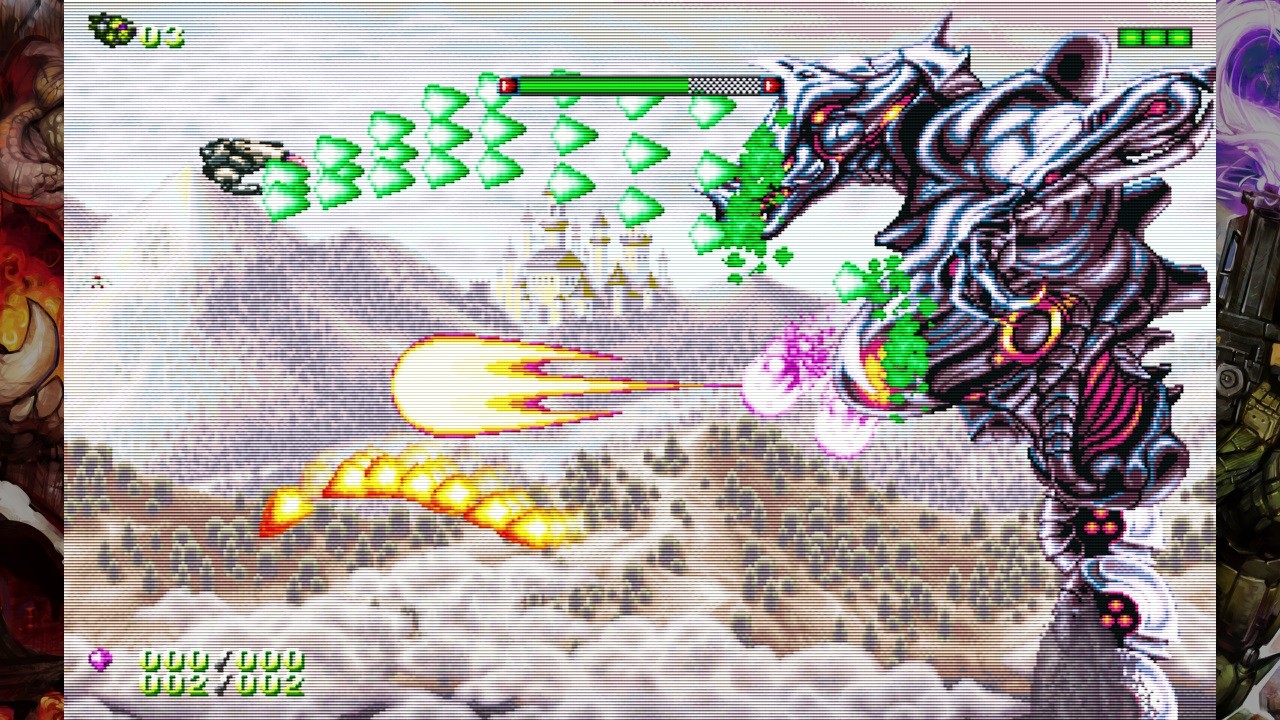 You could argue that I like the game so much because of associating it with classic 16-bit titles, and while that does ring true and may seem biased, these games were fundamentally great because of the gameplay. This applies to Gunlord X. It’s not a fad pixel art style, the music isn’t the drab Muzak you hear in a lot of indie titles these days, and the controls are tight. Yes, the platforming sections are tricky and often lead to some grown-up sulking at times, but at least there isn’t a timer on-screen. There are limited continues, however, and to get more, you need to collect the larger crystals that are scattered throughout the levels – and believe me when I say there’s a lot to collect; this would undoubtedly add to the length you’ll play the game.

My biggest criticism boils down to my inability to progress, and that one’s on me. When these games got tough in the past, you could usually put in a trainer-like cheat or use an Action Replay or Game Genie to get infinite lives. Gunlord X is the kind of title that I would happily cheat so I could get further in the game. The story isn’t all that compelling, but the gameplay is just great. Getting so far to only run out of lives and continues is frustrating, but warrants a bit more practice. So yes, Gunlord X is quite a challenging game but not for the sake of it. Once you learn the mechanics and don’t do fooling yourself into some gung-ho speedrunning (unless you’re good at that), it’s a gratifying experience.

Arguably one for retro fans and those who played the likes of Turrican 2 in the past, Gunlord X is an excellent action platformer well worth your attention. If this sounds like the type of game you’re into, you won’t be disappointed.