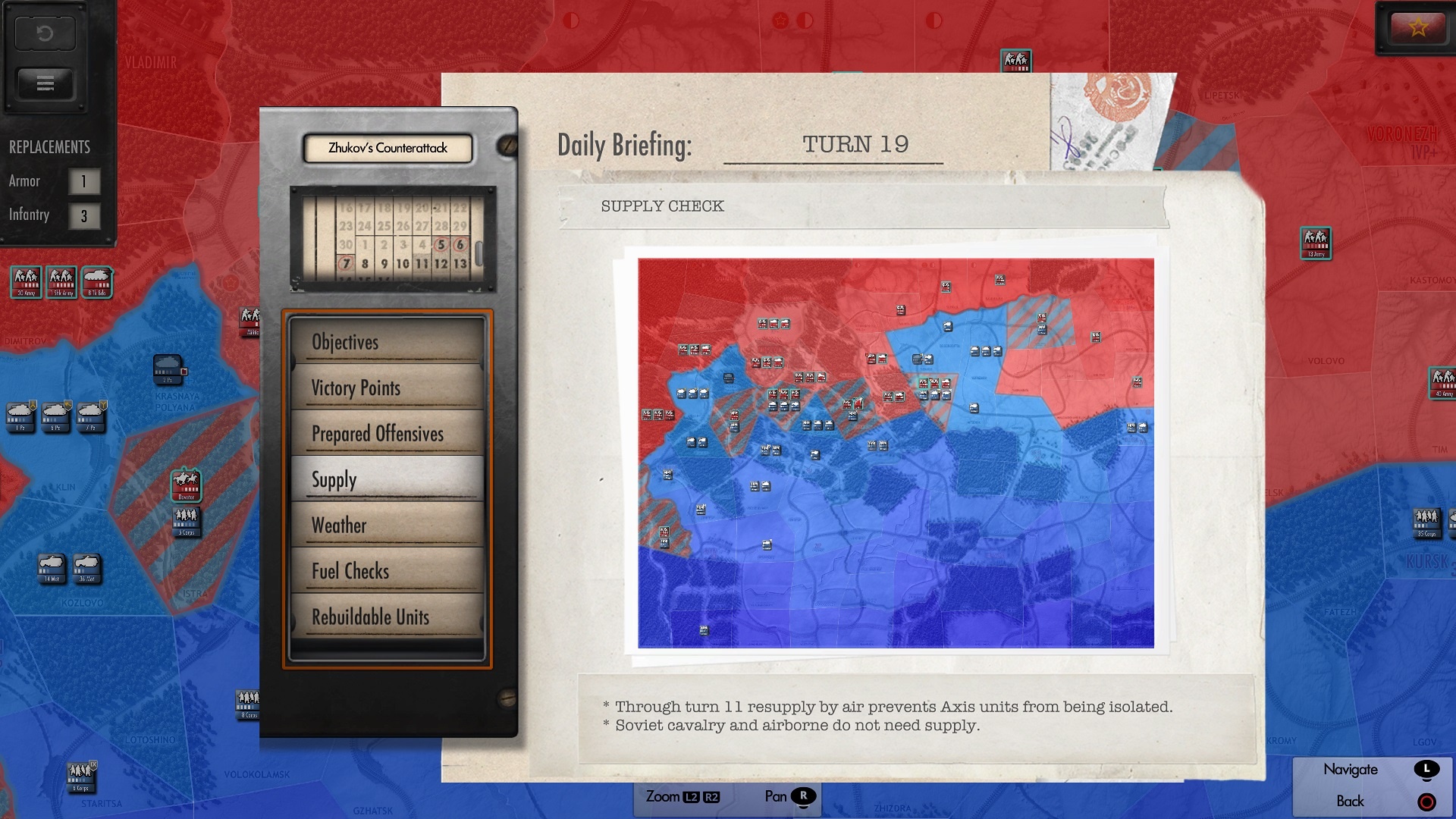 Finding a Grognard-styled, tactical wargame on the Playstation 4 could be described as looking for a needle in a haystack. However, thanks to developers Shenandoah Studios, with publishing from Slitherine Studios UK Ltd, this niche genre of tactical gameplay now comes rumbling onto Sony’s console in the form of Drive on Moscow; and believe me, it’s no easy ride.

As a turn-based strategy game, Drive on Moscow charts the events of the German offensive into Russia during the Second World War. With the onset of a bitter winter on the horizon, it is up to you to either push forward as the Germans, or axis forces, towards Moscow or defend your homeland as the Russians, before the seasonal change takes a grip upon the battlefield. Viewed from an ordnance-survey perspective, you are presented with an extremely detailed map of the south-western region of the Russian mainland. Playing in a board-game style that is similar to Risk, yet in a far more technical mechanic, the battle takes place over four scenarios, with each one split into smaller skirmishes that proceed against the limitations of a timeline.

The aesthetics of the game come in a very basic presentation, yet one that is also incredibly detailed. With the map split up into territorial segments, your units are displayed as tiles which list unit type and name, attack points and hit points. Depending on what force you are fighting for, you can utilise armoured divisions, infantry, cavalry and airborne units; each one capable of varying movements, strengths and weaknesses. All of these components need to be taken into consideration upon each turn in order to successfully progress in whatever campaign you are fighting. 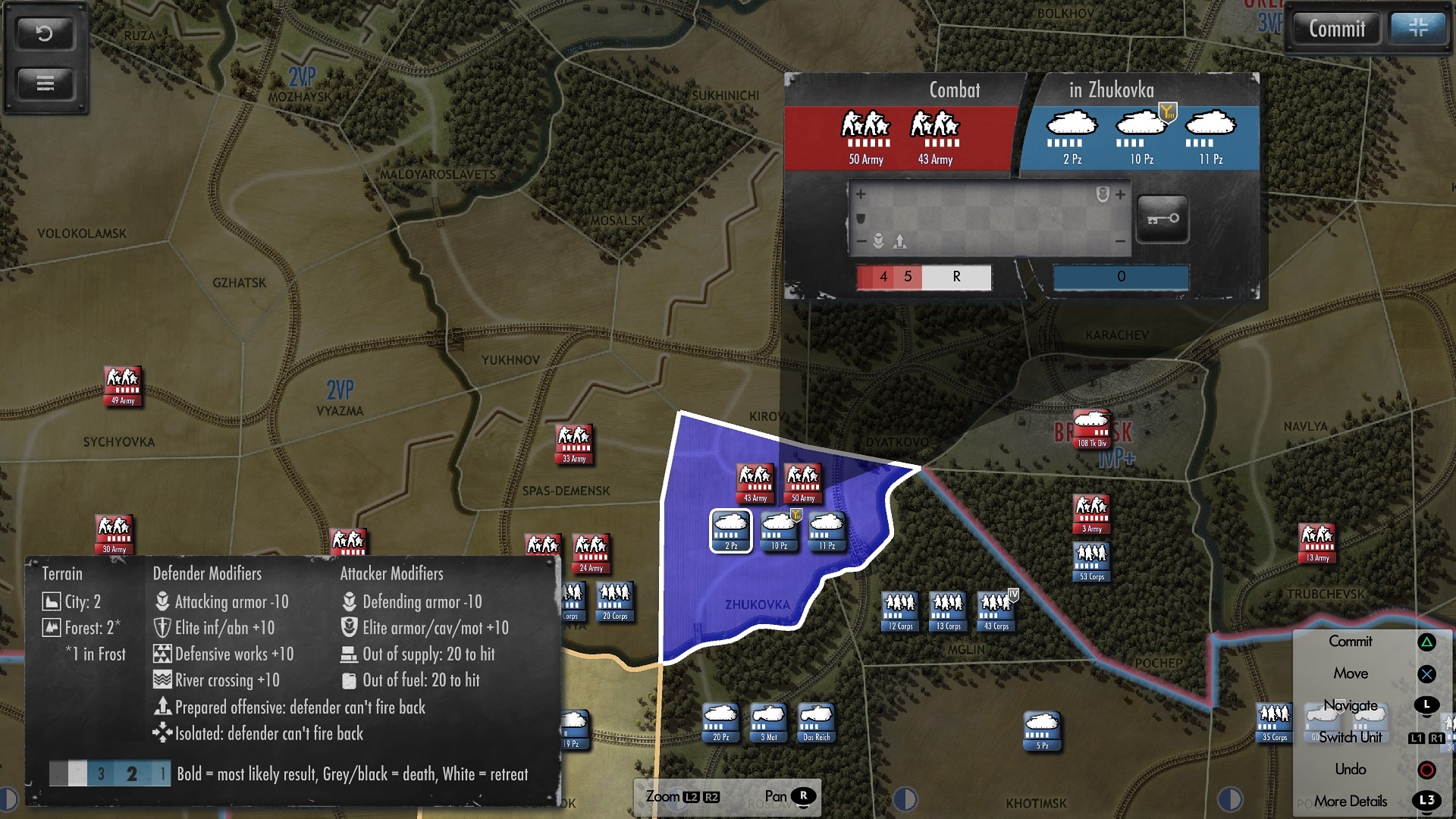 As well as these basic mechanics, you also need to be aware of troop movements with regards to terrain, weather and supply lines to keep your army intact. These all add together to produce a very technical level of gameplay. This is further enhanced with a deliberate unbalancing within each of the opposing forces, one that presents historical accuracies, although each military might can utilise various effects to try and even up the playing field. These can range from railroad movement for reinforcements to air superiority to keep the enemy pinned down. Each turn is split into sections called impulses. During these phases, you can select units and, depending on how many districts they can move through, deploy them to bolster your strategic plans. Each section of the map can hold up to a maximum of three units each and, if already occupied by an opposing force, automatically fight once you’re deployments have been committed. Once these movements and skirmishes have been deployed and resolved, the impulse is completed and time advances ready for the enemy turn.

Once twenty-four hours have passed, the impulses reset to the next day and the war continues; with each stage, or scenario, taking place over a set number of days. However, the further time progresses, the closer you get to the cold fronts of the Russian winter. This gives a sense of urgency to the game as the change of seasons gives the Russian army an advantage in battle. Between each of the battle phases, you have access to various forms of documentation that inform the state of the battle; providing information such as enemy movements, advantages and disadvantages, as well as your own. From here you can plan strategies, pick enemy units to suppress and resupply.

However, this is a title that is very unforgiving in its mechanics. The AI is a supreme strategist, providing you with a very stiff opposition in whatever campaign you choose to play. In order to prepare you for the challenge ahead, the game does provide a tutorial that outlines all of its mechanics, from deployment, unit statistics, supply lines, movement limitations and terrain advantages. It also contains a comprehensive overview should you need reminding of the game’s many technicalities and mechanics. The main focal point in achieving success comes down to the use of Victory Points. These are scores that are awarded for achieving success towards your final objective; gaining new ground and defending your lines. It runs along a tug-of-war style of gameplay, as you may be awarded points for claiming new territory, but you will also lose them if the enemy reclaims the ground. Victory comes with a pre-set limit that is determined at the end phase of each scenario; achieve a score above the threshold and you win the battle, although not the war until the capital has been taken or surrounded. Score below, or tie the marks, then a loss or stalemate is achieved. 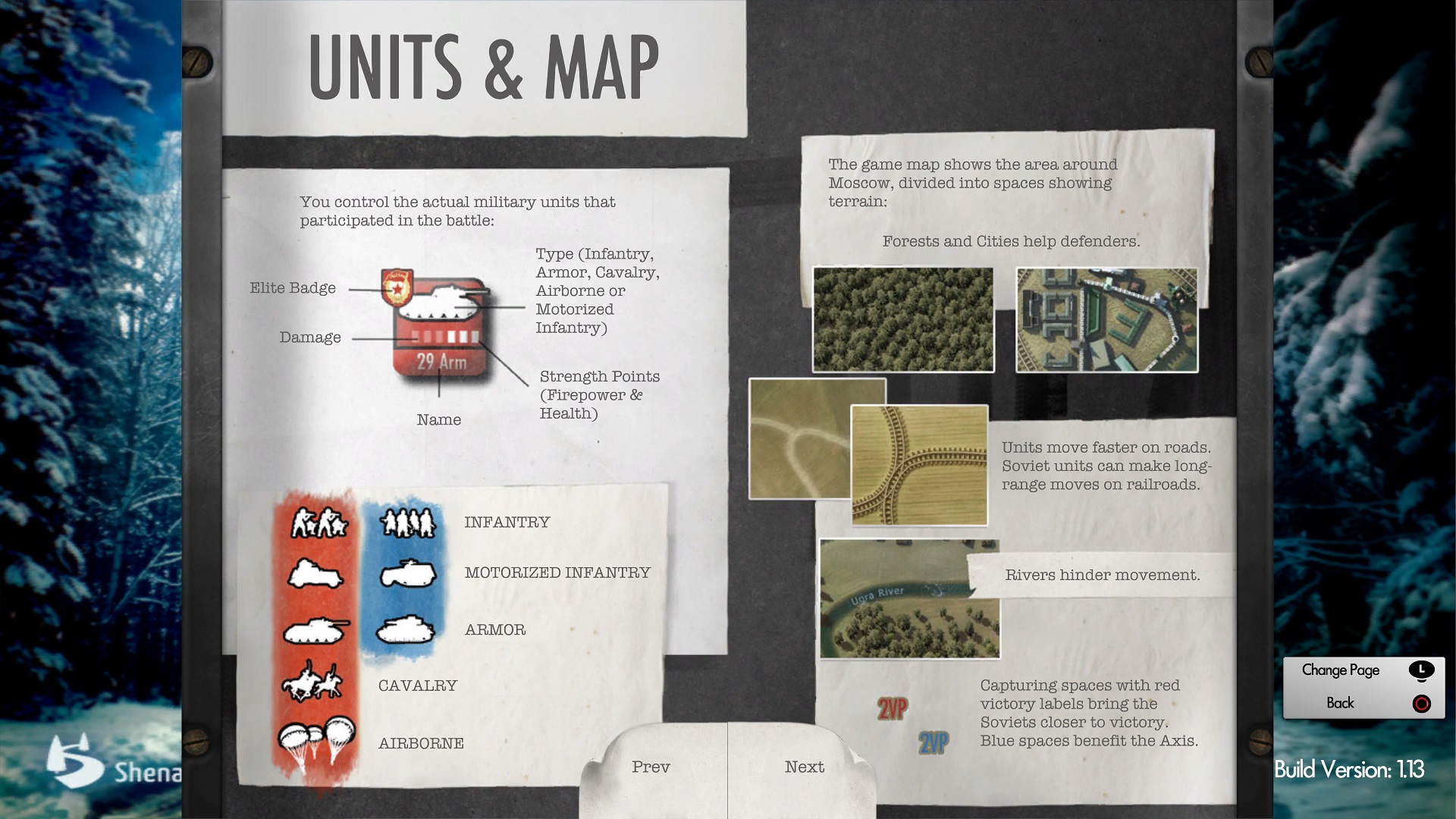 This adds a nice mechanic to the gameplay as you tussle for advantages on a number of fronts; time, the battlefield and with victory points earnt, or lost. There are so many elements that need to be taken into consideration, it can soon become a game that may be out of some people’s depth. It’s not very accessible and a good deal of time needs to be taken to learn its mechanics if you want to get the most out of it. I can’t iterate enough just how gruelling this game is, yet at the same time, is extremely satisfying to play if you are looking for a hardcore strategy game.

Don’t expect any cut-scenes or animations here, this isn’t the game for it. It’s purely tactical that will satisfy any budding armchair generals out there. Despite its difficulty, it is possible to change the course of history and alter the facts of the battles that this game is based around. Its historical accuracies are maybe a little, too accurate but that provides victory with an even sweeter taste from the success of your own strategic abilities. Despite being a very unforgiving game, it is great fun to play and provides a very solid experience. If you own a vita, this is a game that transitions very well in the use of remote play; although some of the texts are quite small but, ultimately, not unreadable. Drive on Moscow is an unusual title to find on a console, but it is also a very welcome one with its rather niche mechanics and gameplay. If you’re not a fan of tactical games, then I would advise you stay well clear of this game as it certainly won’t be your friend. However, if you like a stiff challenge and fancy yourself as the next great strategist, this this is a title well worth checking out, especially with its pocket-money pricing; in that respect it offers excellent value for money as this is a title that will keep you busy for a long time, even up until the cold blast of winters begin to blow again.