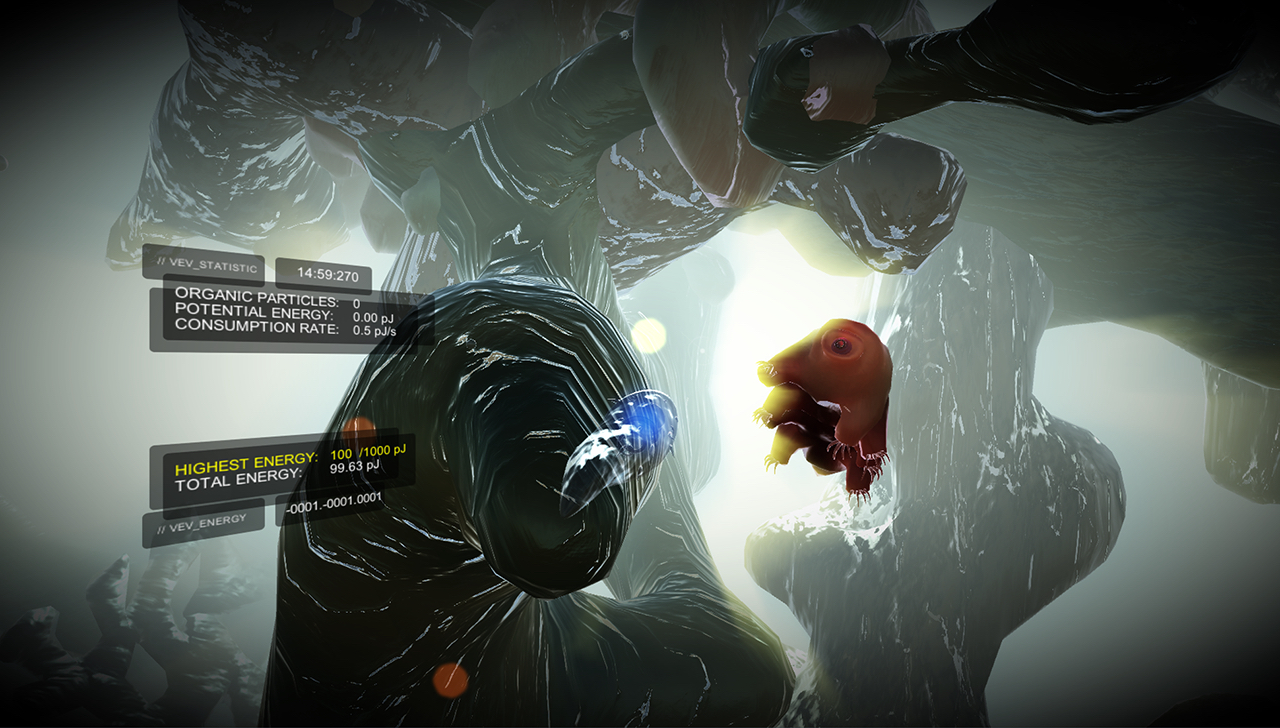 Earlier in the year Trurant Pixel released an indie developed game called VEV: Viva Ex Vivo It received mixed reviews with scores as low as 3 and some as high as 7, the reviewers listed its lack of real gameplay and design issues as a game breaker but some reviewers praised it for its innovation and fascinating educational environments, also suggesting that it was a perfect candidate for a VR update which would certainly help elevate the game experience , it was even reviewed on this very site by fellow reviewer Terrence Sellers who gave it a 5/10 but stated it need a “AAA comb over” and “goals added” to achieve a higher score, so I am pleased to say the Trurant have released a VR version of VEV and it does improve on the original in many ways, however It’s very minimal gameplay and lack of any real direction or goals unfortunately haven’t been tweaked but fortunately the wonderful world of VR gives the environment’s you find yourself navigating through a new lease of life and graphical polish, and improves on some of the failings plaguing the original release.

I will review this from scratch in case you haven’t heard of the game or read any previous reviews, gameplay in VEV involves you exploring various microscopic environments as a synthetic single cell life form, some are indigenous organisms like mud or water and some are organic including Blood, the latter being the more challenging as the organic environments are living and your single cell will be interpreted as an invader and attacked, think of what your immune system does when you get a cold, only you are playing the cold! 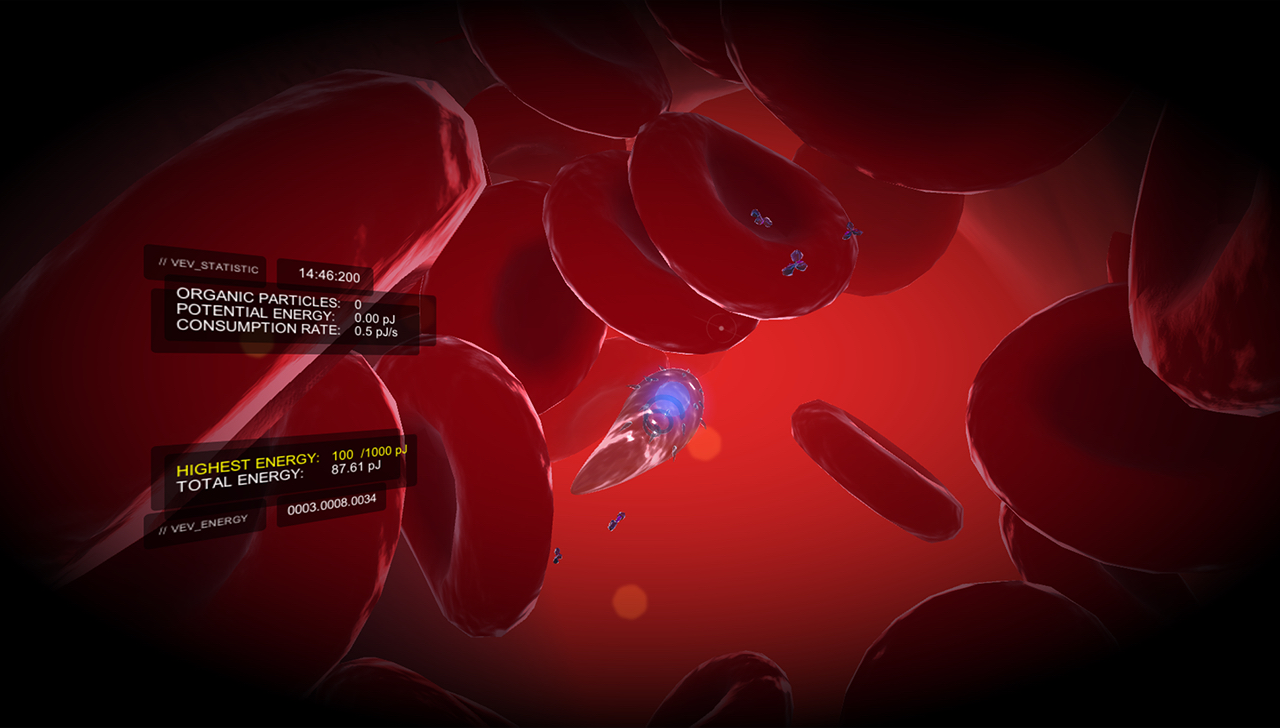 Survival depends on two main factors, absorbing small particles found floating in your surroundings to increase your ever diminishing energy and avoiding attacking organisms who either have deadly intentions or just want your energy reserves, this was a major flaw in the original release as you really couldn’t see the required particles or in some environments the attacking parasites, which led the game to become frustrating as death was a certainty once you were latched onto or unable to find the energy needed to survive. Fortunately, now being in virtual reality and not just on 2D TV screens all attackers and particles are now clearly visible and it becomes quite a fun and thrilling life or death struggle through beautifully visualised substances.

Initially there are four samples for you to test your survival, exploration and avoidance skills, once you have satisfactorily finished these you are gifted another three to explore, the easier levels require you to just explore and collect information leading to quite a relaxing and enjoyable experience whereas the survival levels can be both be very challenging and rewarding in equal measure.

The VR addition has now lowered the 30mins play time for each level to 15mins which in my opinion is a good thing as it can now be played in small snippets eliminating the brief times of boredom I found on the original and also giving you that break from VR that many users require. 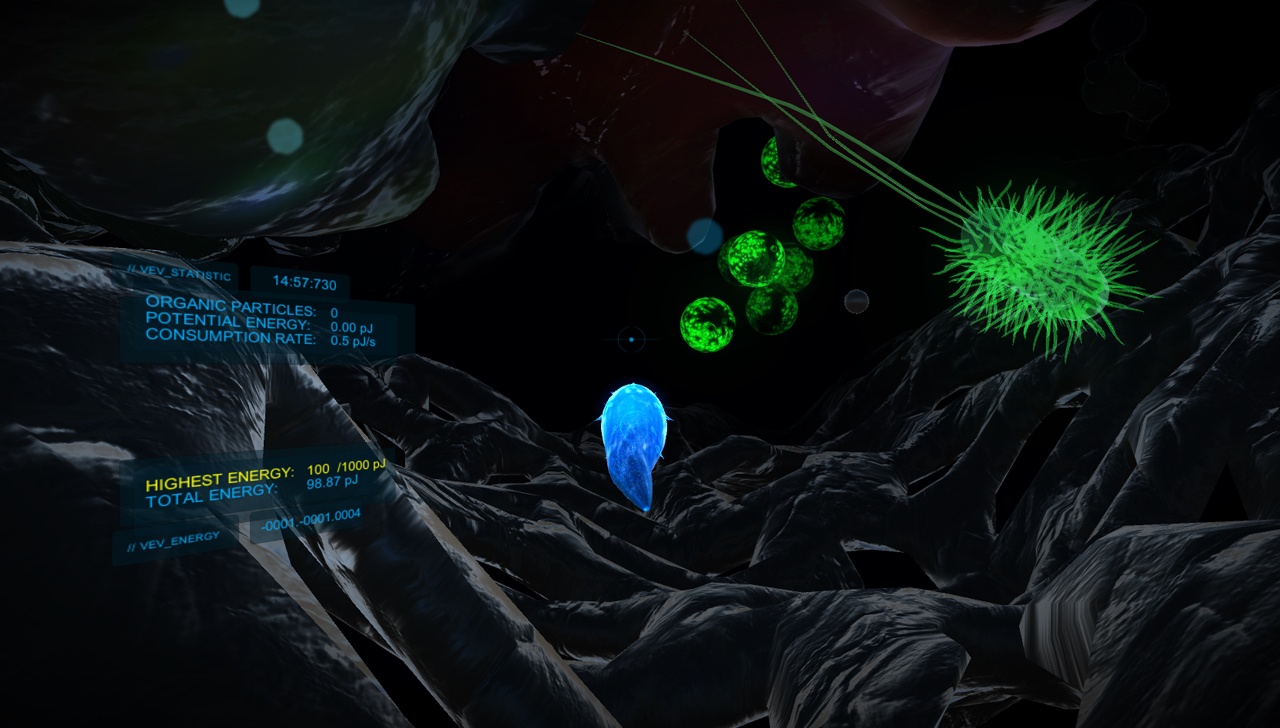 Controller layout and general gameplay haven’t changed from the original, you start with an energy level of 100 and being a cell you are constantly moving within the chosen environment which will cost you 0.5 worth of energy every second, if you want to move a little faster you hold R2 but this will cost you 1 energy point per second, slower will cost you only 0.25, but in the survival levels moving slow could be a death sentence as attacking antibodies can be very quick so it’s here your survival instincts are needed and collecting the energy particles needed to keep moving becomes a life and death gamble.

Overall the new update has not only improved on the original but I feel has brought the developers intended vision of the game to life, I have to ask like other reviewers why this was developed as a game and not as a biology educational demonstration tool for schools and colleges but I have to say I enjoyed traveling around its various real microscopic environment’s and have a whole new-found respect for the cell level life forms and their daily struggles.

I have to improve on the previous 5/10 score as the VR overhaul has really brought the game to life and in my opinion is worth the £3.99 entry fee, you won’t be playing it every day, in fact you probably won’t replay it again and you certainly won’t be sharing your experiences on social media but you will find VEV a relaxing and minimal taxing journey through various substances you unconsciously see every day but at micro cell level. In short think of it as being under the microscope not looking through it.