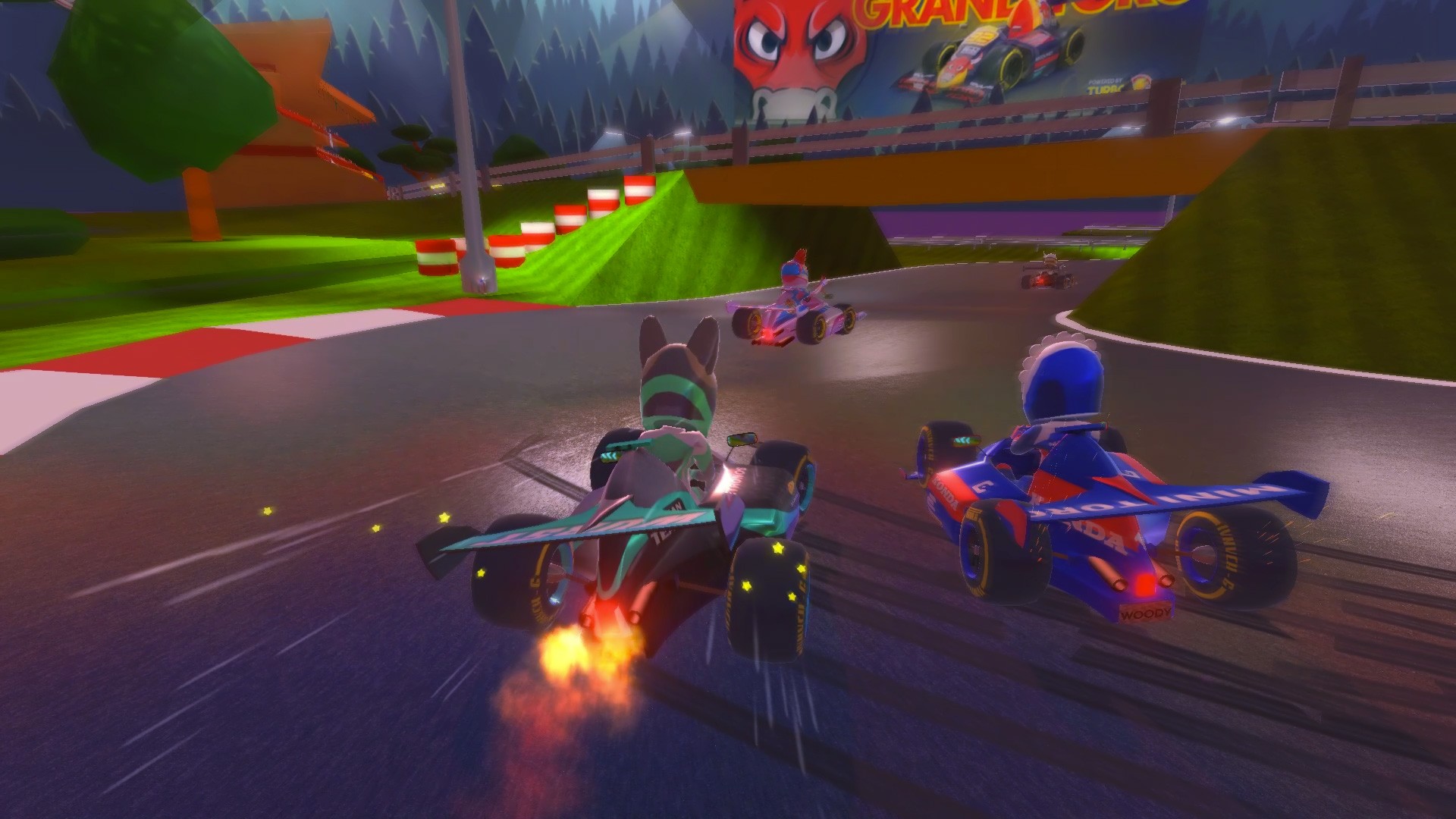 Touring Karts is an arcade racing game by Ivanovich Games and was released on the PS4 on December 12, 2019. When I first saw that Touring Karts was coming to PS4 my initial thought was. ‘oh great’; another Mario Kart attempt that we have all seen time and time again, but never really live up to the game they were emulating. With Touring Karts I was very pleasantly surprised though. They have seemed to manage taking what used to be a rinse and repeat cycle of arcade racers and change up the game a bit. For starters, this game can be played in several different ways. From the very first splash screen you are asked if you are wanting to play the game in VR or not. I chose to play the game without the VR as I wanted to see how it stood up to the other attempts in this genre. Much to my surprise, there were far more options than VR or not. You have the option to play this game in 6 different ways, 2 of which don’t require the VR headset at all. You have your standard VR with your DualShock 4, the DualShock 4 alone, Racing Wheel with PS move controller (VR), the Racing Wheel alone, 2 PS Move controllers (VR), and the 3D rudder with PS Move (VR). I was blown away at the number of different ways to play this game.

Once you have selected the way in which you will play the game, you will come to the main menu. You have the option of the single player races or multiplayer options. In the single player, you will go from circuit to circuit trying to get the highest place possible and completing challenges in order to gain in-game money and unlock different cars and options. You will find that, sometimes, even if you did finish first that you simply don’t have the ability to automatically move to the next circuit. You do have the option of using some of that in-game money to purchase access to the next circuit if you find yourself stuck on a challenge or trying to place in the top three on a particular track. The cost to move to the next track is $1200 in-game currency and that amount is easily earned through simple game-play. The only option available at the beginning of each circuit is normal difficulty which allows a maximum of 100XP for coming in 1st place and then you have the option of going back through on hard and then again on professional difficulty each doubling the XP gained from the previous difficulty. 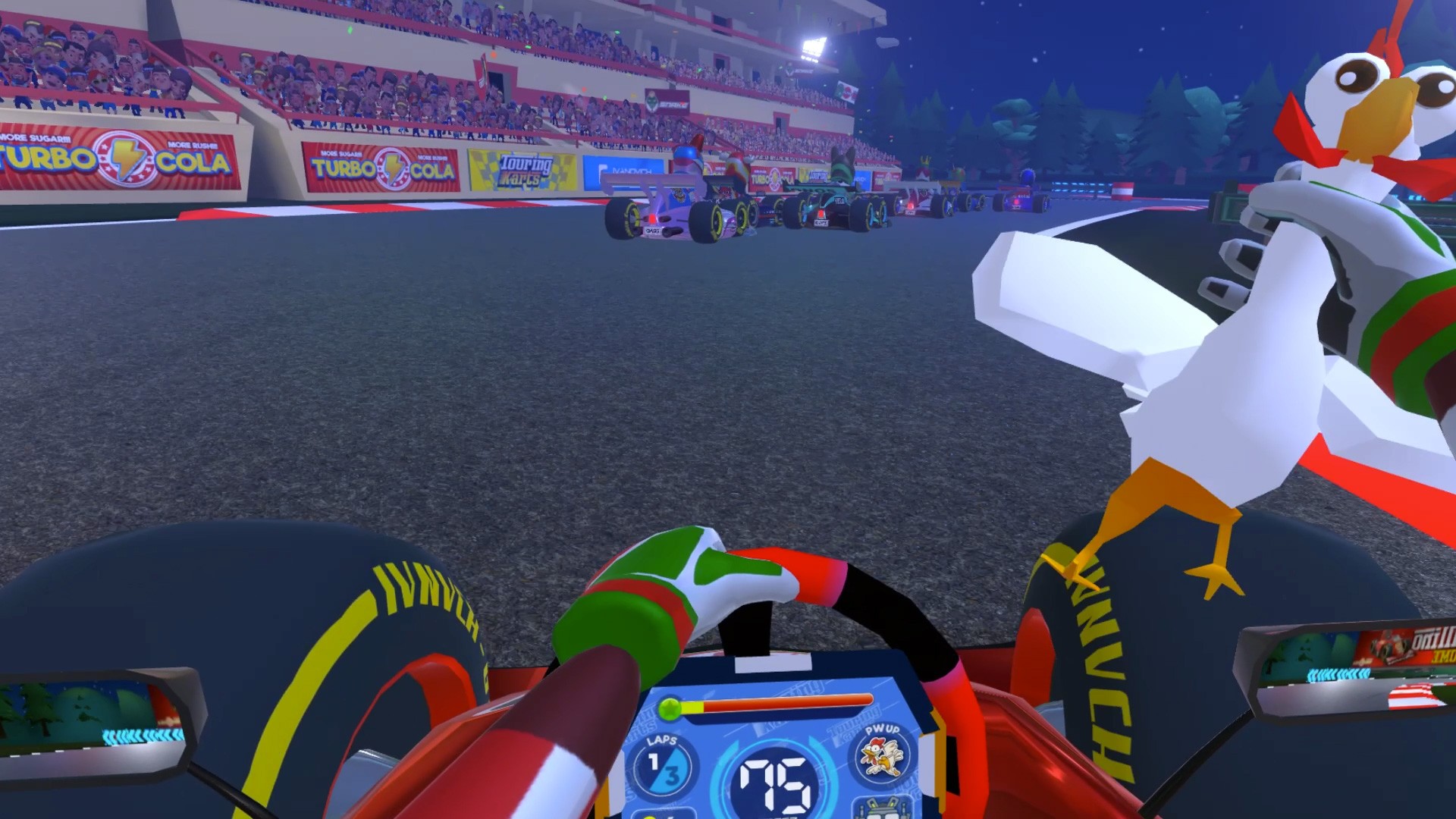 The gameplay is very similar to that of the Mario Karts that I had originally suspected. Drive around the track trying to pick up power-ups along the way and using those to best your opponent in front of and sometimes behind you. The thing I found the most satisfying is holding on to the power-up and if you could make it to the next power-up station without using it, you can combine it with a separate one and make it even more effective. So many times I would be playing and find myself using the power-up and it just sliding across the track and getting oh so close to hitting the player in front of me and just missing. Once I figured out that not using it was the best way to go, I hardly ever used another power-up until I got the second one. The developers really thought this one through as you could run through your typical “?” box and get a random pick up and then the next location they are in you will see differences there, such as an RPG. This allows for far more success when using your power-up.

The one thing I found to be disappointing was the lack of a turbo button which is so common in these types of racers. Instead, what they opted for were small turbo boosts on the ground and on small ramps around the tracks and the amount of boost you received was based on how much turbo you had earned. You earn turbo by drifting and driving behind the other cars. When you have done this correctly you can find yourself going from 8th place to 1st place simply from hitting the pad on the ground. While yes I did say the lack of a turbo button was disappointing, I was quickly let go of that disappointment when I saw the cleverness of the turbo pad. It came in handy several times in the later races in which I found myself towards the back of the pack and was able to position myself behind another racer for enough time to earn that super boost. 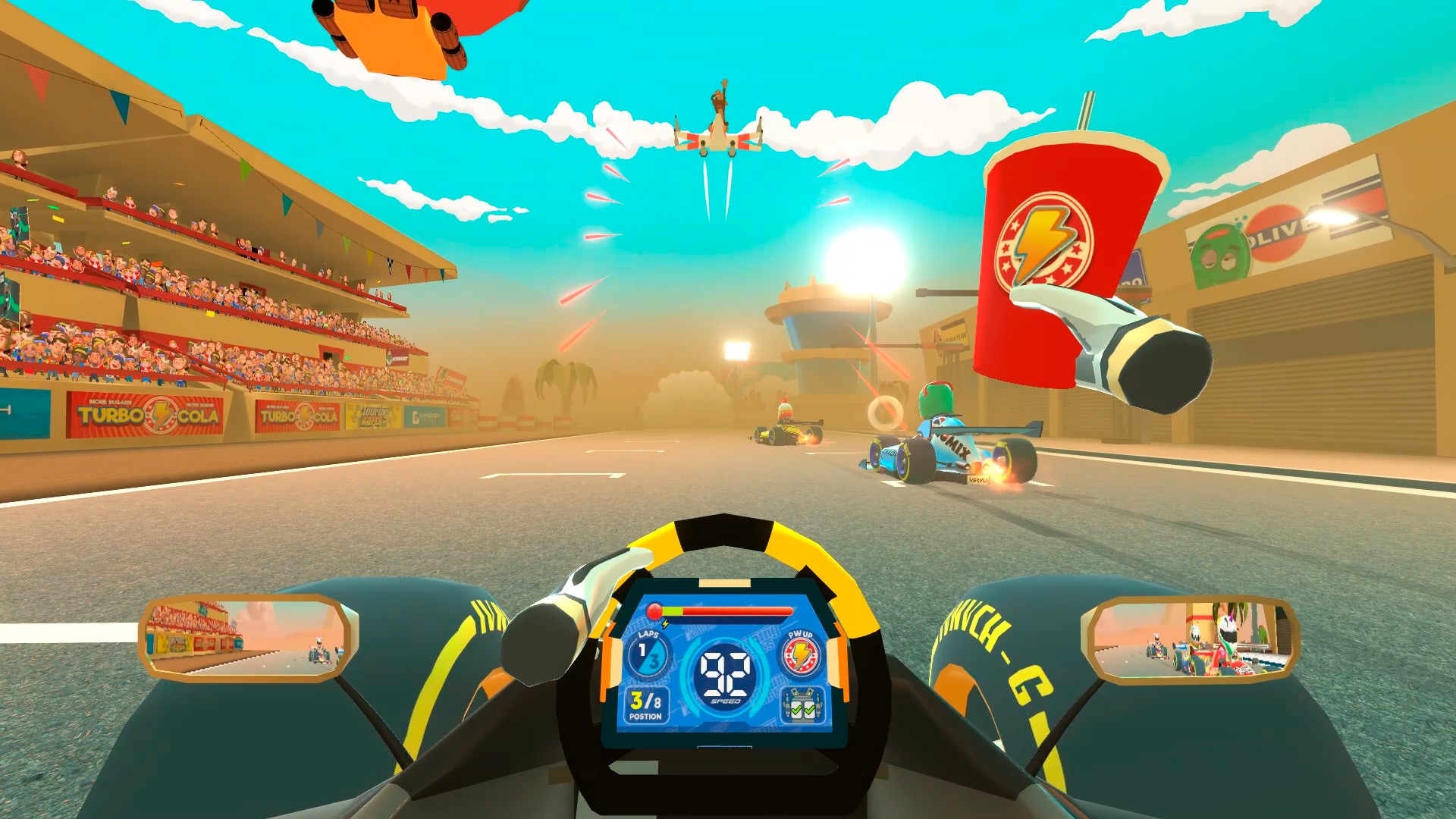 The game overall is a very fun little game. I found the most interesting part of the game to be the combination power-ups. This was a very interesting take and made for a lot of fun to try and collect them all. Overall, I would say if you are a fan of the Mario Kart type of game and the sub genre it has spawned, then you will definitely enjoy this take on it. It has its own unique feel while keeping to the classic arcade style formula and made for hours of fun for me. I can see myself coming back to this game from time to time or especially as some of my friends start purchasing the game so I can race against them directly. If you are the type that really enjoys multiplayer over the single player races in these types of games then I mean you have an option. I personally didn’t find the matchmaking to be too terribly long and at least you do get to race around a track while you wait. They also have daily events in which there are 8 tournaments of 3 races each and you can earn some pretty sweet in-game prizes there too. Personally for me, I am more of a sit back and relax and race the NPCs type of racer.

An arcade style racer that anyone can pick up and play and definitely one that you will want to come back to in order to challenge your friends to some racing action. Anyone a fan of the Mario Kart style will feel right at home with Touring Karts and enjoy some unique qualities this game has to offer while still maintaining that familiar feel.

Charles Kyle no longer writes for Bonus Stage. We would like to thank him for contributing 1 Review during his trial period with us. Reviewers are an essential part of Bonus Stage and therefore we sincerely appreciate all contributions from reviewers/writers who in-turn help to contribute to Bonus Stage's success. We wish him every success with his next venture.