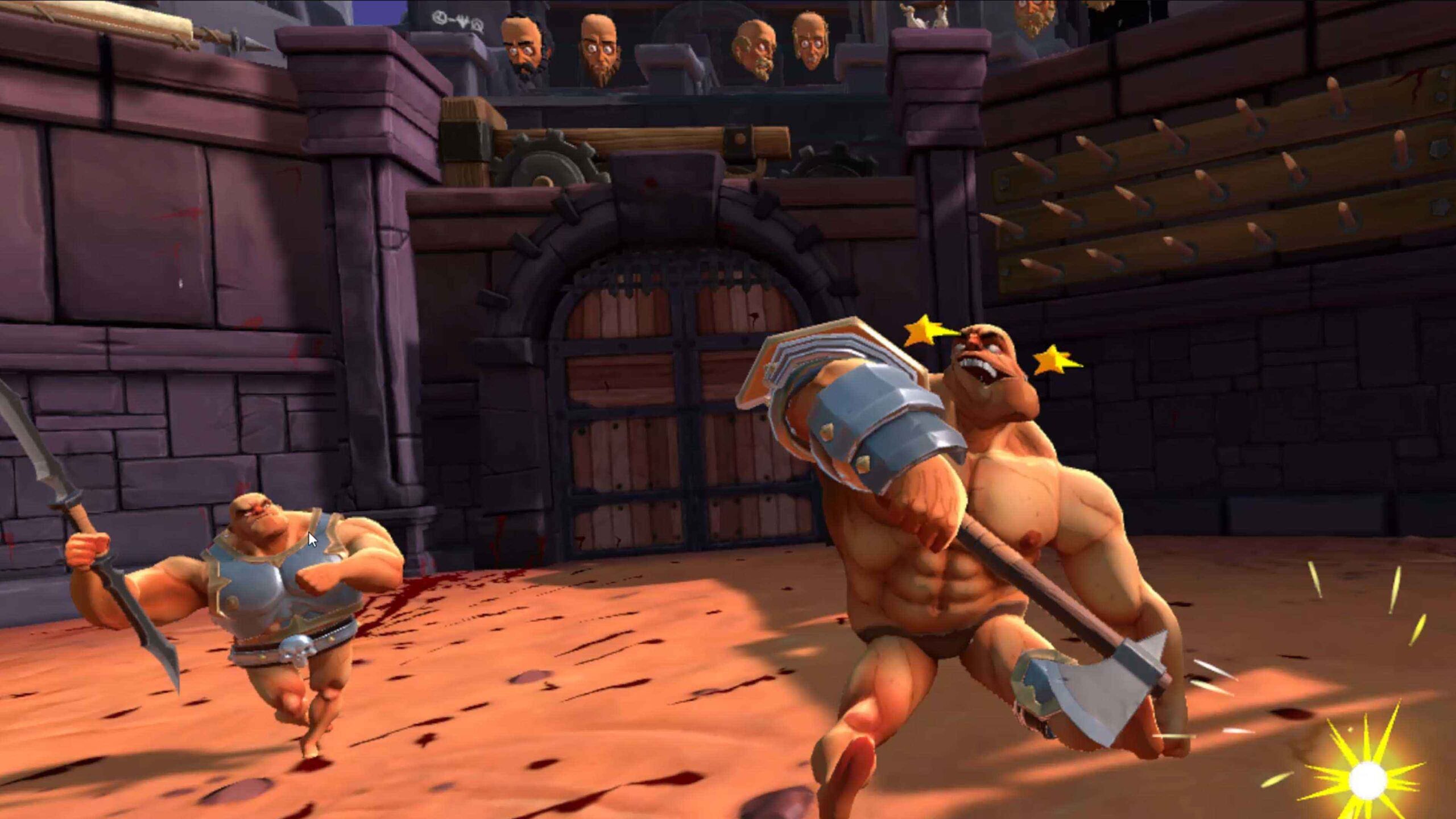 Nailing a virtual reality game is a difficult task, and it’s not until recently that the PSVR has received the same love and attention that the likes of the Oculus Rift has been getting for a while now. Gorn is a tried and tested favourite for our desktop VR brethren, and after spending a week in this bonkers Colosseum it’s easy to see why, in this fun, but at times frustrating, gladiatorial arena.

At its core, Gorn is a simple wave-based combat sim, putting you in the shoes of a super strong gladiator, tasked with overcoming your enemies with a collection of menacing weapons to appease your Ceaser-esc overlords. There’s a short series of sorta scripted levels, and although there’s no overarching storyline, each arena offers new enemies to fight and challenges to complete.

Enemies are hilariously dumb, bouncing towards you across the battlefield with no sense of the destruction they’re wandering in to. To be clear, this isn’t a game for those looking for a strategic combat experience, but rather those looking to cause chaos en masse. It’s grotesque and grim, with blood in abundance, but it’s also so daft that it off-sets the otherwise horrific amount of body parts that litter the battlefield.

But there’s an immediate gratification garnered from perfectly parrying an enemy swing, only to follow up with a well-aimed chop of an axe to the head, leaving your unlucky enemy to wobble around with his eyes hanging out of their sockets. It’s obscene, but it’s hard not to grin while watching enemies crawl towards you after you’ve lobbed off a leg or two, only to then beat them to death with their own limb. 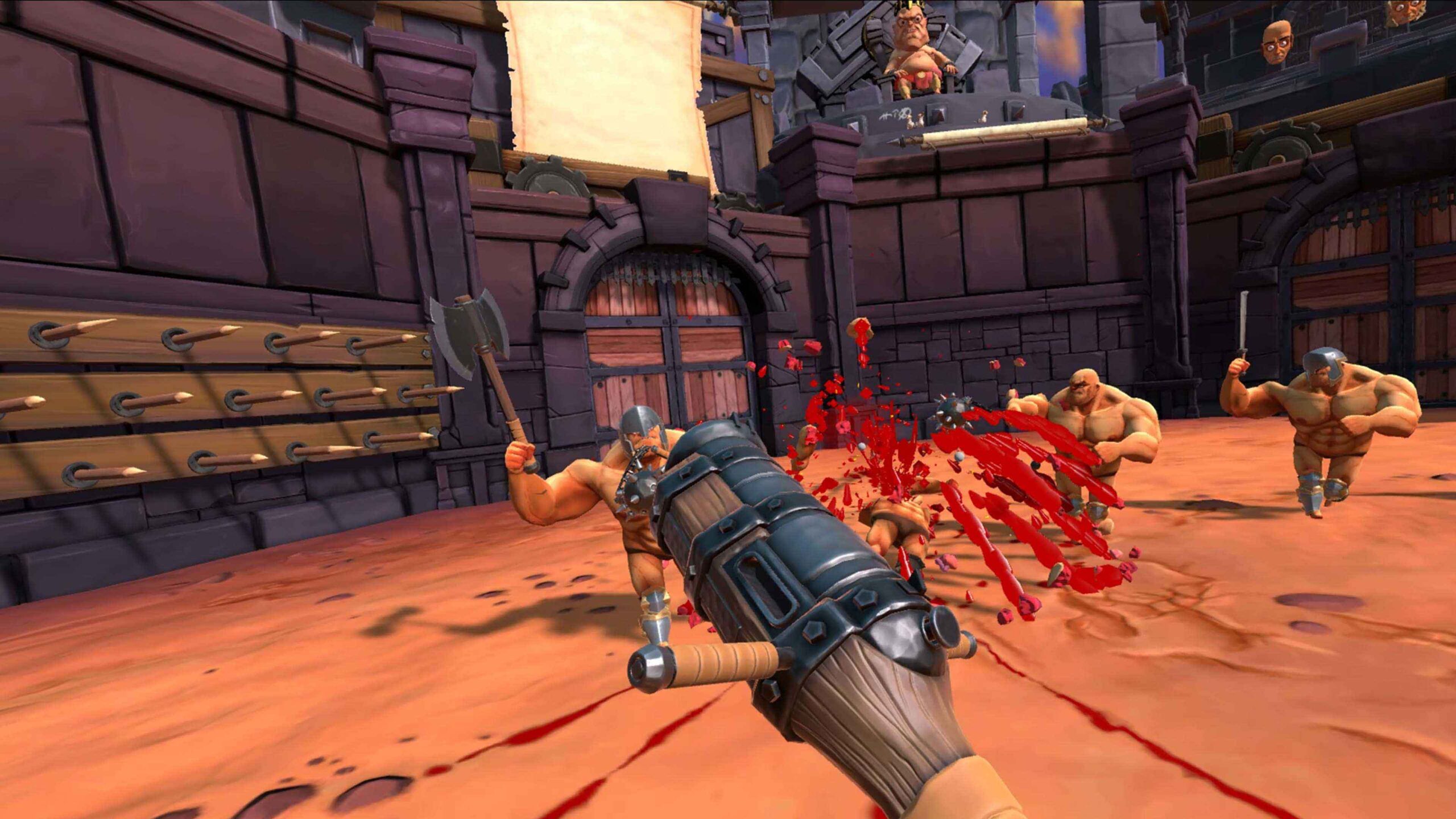 Most enemies are a variation of the same meat-headed Gladiator, sometimes armoured, other times only a pair of short shorts to protect them from their inevitable doom. There are however a series of boss battles that require a little strategy to overcome, like Achilles, who ‘can’t be defeated’, and a giant crab boss which is both horrifying in VR and a bit of a none-challenge to fight.

At times swinging your weapon widly is sufficient enough to get a kill, bug armoured enemies take a little more work to overcome. You either need to aim for weak points in their protective gear or smack away at their armour with hammers and such until they become exposed. It’s not a system that ever varies much, but for a quick pick up and play it’s a lot of fun.

But while it’s a great laugh, handling in Gorn is uneven at best. While, for the most part, swinging your hilariously bouncy swords and axes is accurate, some weapons don’t have the same responsiveness. Good examples are spears and the bow and arrow, the spear a wobbly mess of certain death for the user if you can’t get a grip of it quickly, the latter, difficult to control but satisfying to pull off. That being said, where you’re forced to use certain weapons at the start of a round, you can quickly switch out to other weapons dropped by enemies if you like, so you’re rarely forced into limitations. 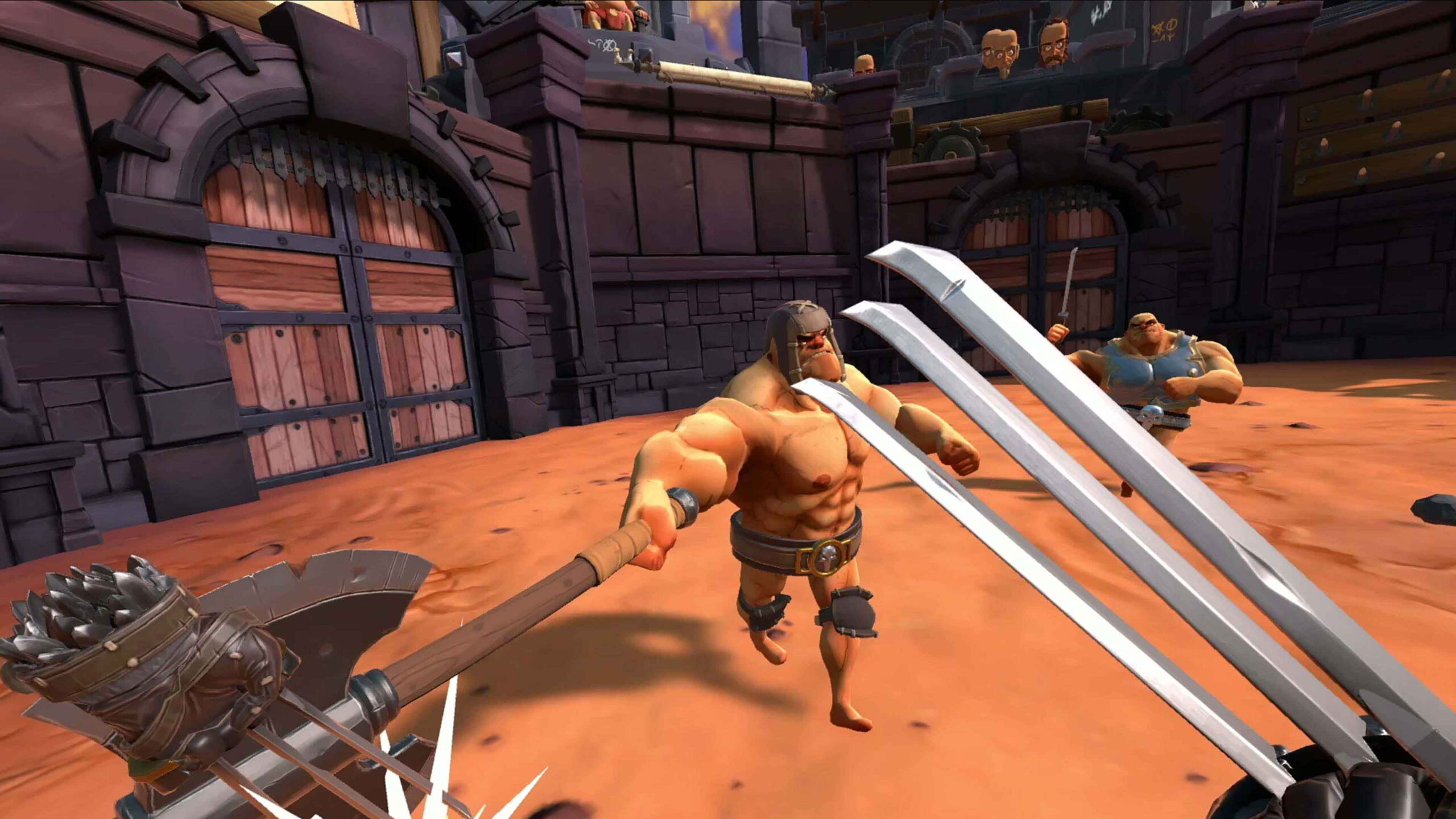 While swinging flails and swords is decent, movement is a mixed, odd bag. There’s no teleportation or natural motions to move across the arena, but rather you drag yourself around while holding the PS Button. It’s a strange way of overcoming the limitations of the Move Controllers, and one that takes a while to get used to. It’s not, however, horrific, but it often leads to cheap deaths when you can’t move away from a group of enemies in time to keep you safe.

Its a problem that rears its head mostly when you get hit in Gorn, which is almost an instant death sentence, giving you only a few seconds to kill an enemy to save yourself. It’s quite frustrating that the only way to stop yourself dying is to revert to flailing madly in the direction of enemies, hoping one of them dies before you do. It’s more frustrating when you’re hit by an enemy from behind, one you haven’t been able to drag yourself around in time to stop, thanks to the weird movement controls.

Outside of the handful of arenas there’s very little to do in Gorn. There’s an endless mode, which does what it says on the tin, as well as a chance to customise the settings to make unique battles. That being said, even though I’ve finished the main game, I still find myself drifting back in and out of the endless arena for a quick burst of bloody fun.

For its shortcomings and its limitations, Gorn is still a super fun VR experience. Yes, enemies approach you like they’re straight out of Goat Sim, and yes, occasionally its weird movement choices are maddening, but it’s a wonderfully chaotic adventure that I can’t stop bringing myself back to whenever I feel like decapitating a bunch of floppy gladiators.

GORN is absurd fun, a bloody, messy VR experience that is hard not to love, despite a few weird choices and issues.