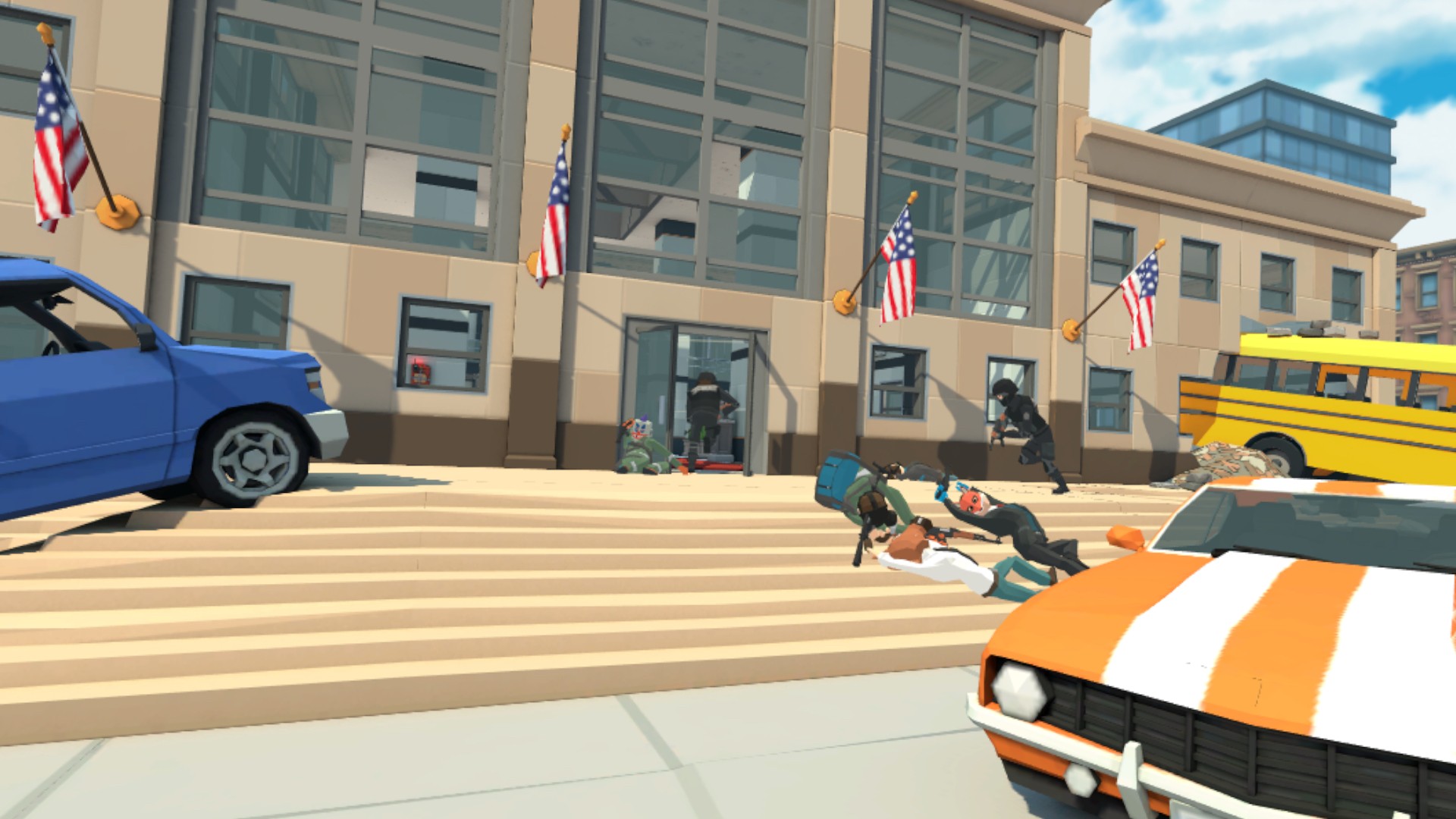 This is what a VR game represents to me. If donning a weighty device such as the PSVR helmet, I want whatever it is I’m playing to be able to take me away to some distant world or location that makes me forget where I am. Or that I look like I’m heading to a second-rate Battlestar Galactica cosplay convention. It’s not a big ask to want something immersive, so it’s pleasing to see that Crisis VRigade is an almost perfect model of a VR experience.

Set in one scenario only, you play a cop that’s been called to a bank robbery where you’re there to negotiate with your bullets. You have just six minutes to do it in, and the ever-present timer is in your face to push you a bit. Why aren’t you storming through a level? Because Crisis VRigade takes cover mechanics seriously: if you don’t ‘duck and cover’ you can expect to see a game over title screen, and that ‘retry’ that’s offered to you only sends you back to the start of the game.

I remember in one of the few times I went to the Student Union in the days of University; they had a Time Crisis clone setup. Though it was lunchtime and a prime example when most students were in bed or already drunk, my friends and I had a go at the game, showing ourselves up in the process by ducking and weaving about. But the most embarrassing bit was running out of breath or looking like a fool. With Crisis VRigade, you’re still going to look stupid, but as you can’t see your reflection, you’re going to be jumping around the room like a mad person. 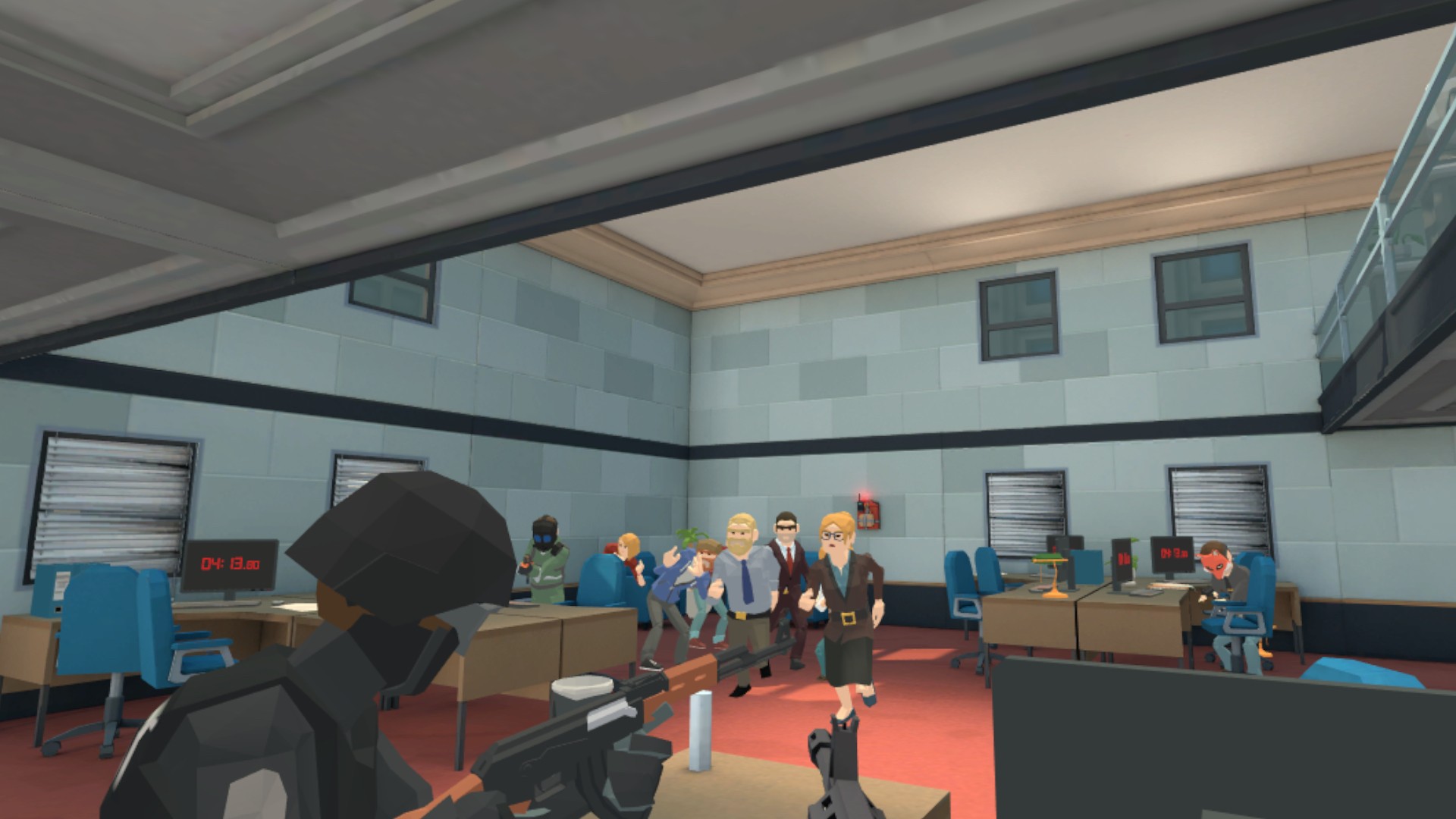 With the benchmark being the Time Crisis series, you would press down on a foot pedal to hide behind cover in a pre-determined area. In Crisis VRigade, you’re thrown into an environment that one can only assume would be like real life as you hear the bullets fly past and all, but it’s finding cover that matters. Starting behind a police car, I didn’t commit myself to actually ducking down as that surely wouldn’t be reflected in the game, right? Wrong. After a flurry of bullets, I was hit, and the game shows the trajectory of the bullet that hit you. Lining it up showed that my torso was clearly visible behind the car, but it’s a game – it can’t be that accurate? Wrong again! After adjusting my position, it mattered, and I was able to avoid being hit in the first area, subsequently shooting an enemy by shooting through the police car window. I genuinely can’t put enough emphasis on how good this was.

Like the Time Crisis series and also Silent Scope, the game is on rails in that the camera will drift along to new areas of the setting and place you into a compromising position. As soon as you head into the bank, there’s no let-up in the danger as you’re faced with mask-wielding criminals intent on taking you down. While their accuracy isn’t on point with every successive shot, they skipped the stormtrooper school of targeting as they will get you. You only have three health points, so after they’re gone, it’s game over. There are two settings but be assured that the easier of the two is only fractionally easier. But it’s like fighting with a bear or elephant; one is going to be slightly easier to begin with, and you can perhaps outwit them, but the results are the same: you’re going to die. 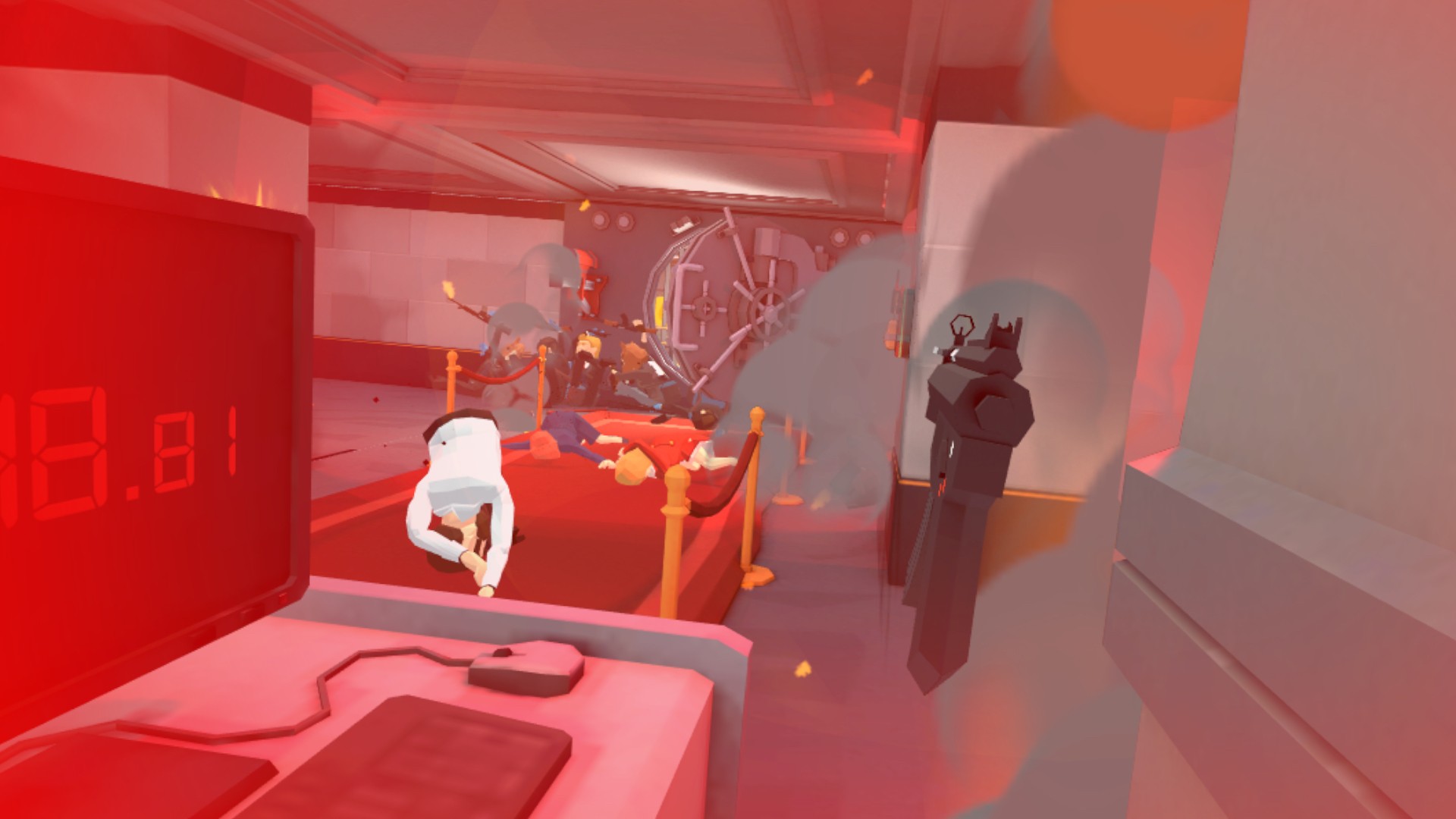 It was the entrance of the bank that put more emphasis on the cover mechanics but also to be mindful of the time. I was able to hide behind a wall and shoot behind cover, but with the handgun you start with, while it’s accurate, the fire rate is weak, so you have to come out of cover to hit your targets; otherwise, you run out of time. I went through a whole range of gun positioning, from rookie cop to 90s Compton gangsta with the gun on its side, I eventually settled for a nuanced position where the Move control was on my hip and understated. It just goes to show how ineffective these movie poses are.

On the topic of positioning, let’s look at reloading. Crisis VRigade has a unique system for reloads as you manually have to load your gun each time. With your right Move controller you handle your pistol and with the left take out a clip from the belt around your waist (these are infinite, sadly, time is not). With the right hand, you first release the empty clip and then hold the new clip and slide it into the gun. After that, you slide the top of the chamber to ready it. It’s like the real thing, so when you’re being shot at think that blind firing will see you through, you then have to reload in this manner while avoiding being shot and also within the time limit. It adds to the urgency and even realism.

I love Crisis VRigade but have to confess that even though it’s supposedly six minutes long, I’ve yet to finish it. It’s incredibly tough, and with the time limit factor and only a small amount of health, it may put off some who don’t have the patience or skill. I have the former, but not so much the latter, but the enjoyment of pulling off a ‘trick shot’ by using the environment to your advantage or where you position yourself in real-life having very real consequences in the game, make this highly recommended on the VR list.

Although limited with only one stage to play, the difficulty (and enjoyment) with CrisisVRrigade make this an excellent on-rails shooter. While not on par with Time Crisis, it has all the elements to make this great and look forward to future titles that can learn from the mechanics in this game.