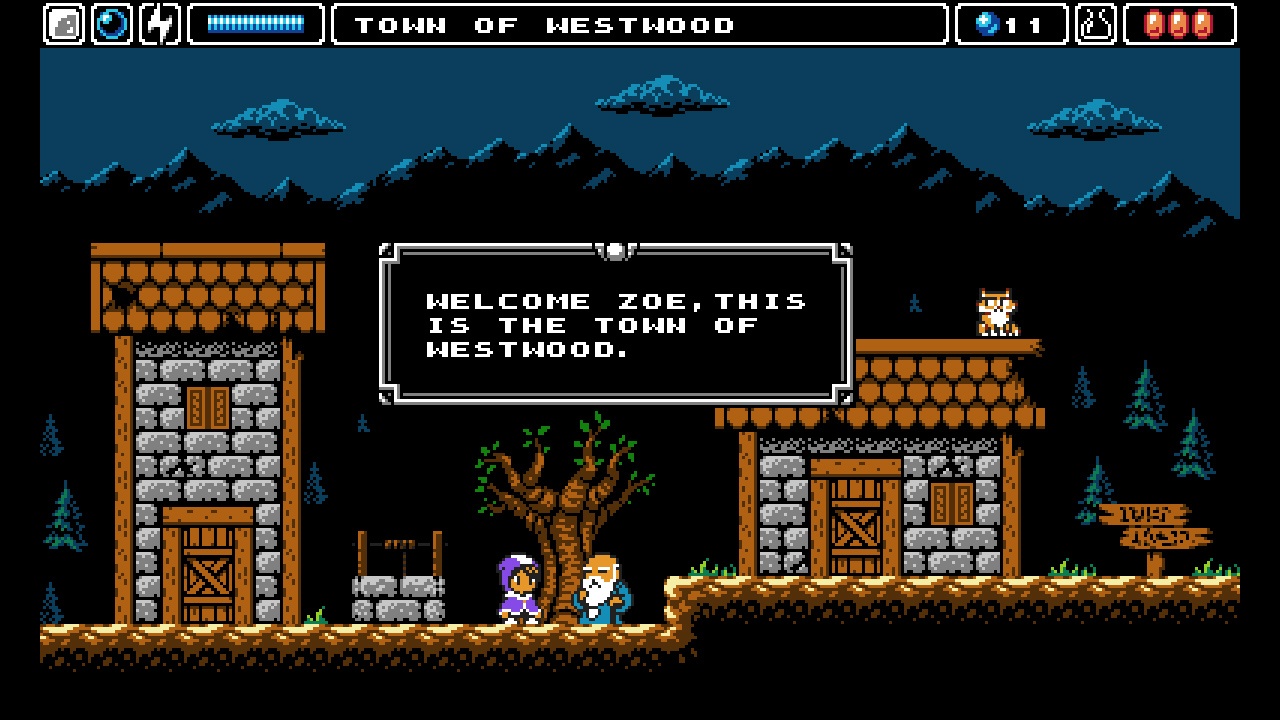 The unbelievable nostalgia pit that is the Nintendo Entertainment System (or NES) is something that people keep tripping and falling into. There’s something that was captured in the era when home video games managed to rise from the ashes of the Great Collapse of 1983, and Nintendo led the charge. People love that time period and the games that came from it: 8 bit design, chiptune music, simple controls and impossibly difficult scenarios. Elden Pixels certainly remembers the experience fondly, and used it as fodder to create their beautiful, frustrating, but ultimately rewarding game, Alwa’s Awakening.

Alwa is the name of the land where our story begins. Turns out, centuries ago, the place was pretty dope and chill, and everyone had a grand time. Then this dude called The Vicar came down from nowhere and decided he wanted to enslave everyone and turn things into Hell. So he got four followers, called The Protectors, to steal these mystical talismans that gave him immeasurable power. So now Alwa is terrible, and that needs to stop. Zoe, our hero, has been summoned from another world to come to Alwa, unlock her true power, defeat the Protectors and stop the Vicar’s reign of terror. Simple enough. Oh, you’re going to want to get good at jumping and casting spells, because, well, if you can’t do that, everyone is doomed.

Alwa’s Awakening feels a lot like a sidescrolling Legend of Zelda, and I mean that in the nicest way possible. You start at a predetermined spot, there are about four hundred rooms on a giant map that also involves a handful of “dungeons,” After a quick lesson in movement so you can get your magic wand (your only weapon of the game), you’re basically turned loose to figure out what you need to do next. You know a handful of things, thanks to talkative townsfolk. One, there are items in each of the dungeons that will power up your staff and get new spells. Two, you need to collect these tiny blue orbs to “level up:” the more you collect, the stronger you’ll be. Three, this game is very labyrinthian: if you don’t consult the map constantly (which is something that you don’t even get at the very beginning), it’s easy to become mixed up, turned around and generally miss stuff, including a bunch of hidden items that will make the game…not easier, but a bit more successful in terms of getting through. 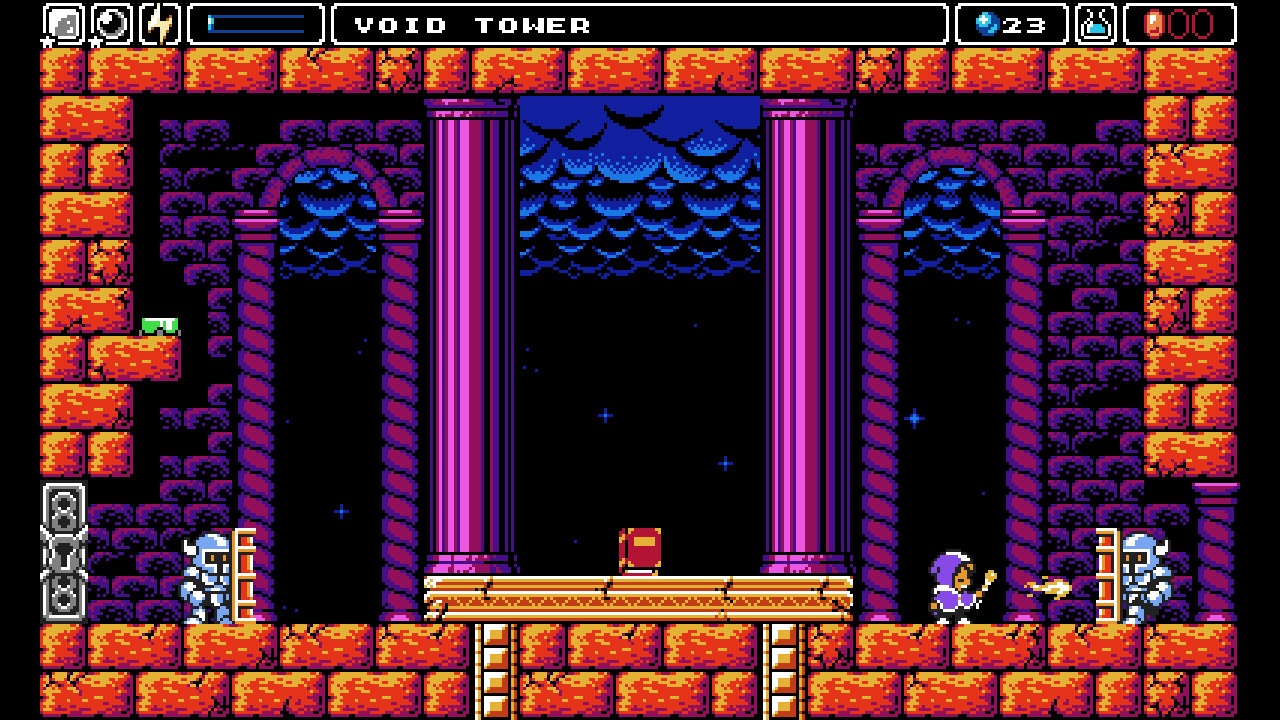 Right out the gate, I’m absolutely in love with the way that Alwa’s Awakening is handled. There’s that fine line that developers need to ride when it comes to making retro inspired games: leaning too far one way or another results in a game feeling dated and broken or, worse, feels like a farce, a pale imitation of what could be or could have been. Instead, Alwa’s Awakening manages to run, screaming, down the middle of the two sides. The graphics are clearly meant to evoke the latest possible era of the NES. Nothing is blocky, everything is done in an appropriate tone, especially the ever-present dark skies (because, you know, cursed land), the stony builds of the temples and castles that act as dungeons, and the tight faces of the enemies that, when zoomed in, are carefully constructed by beautiful pixel layouts.  Better yet, the soundtrack is also incredibly spot on, stirring up a lot of memories of games like Milon’s Secret Castle, Castlevania and Metroid. But Alwa’s music stands on its own, unique and independent from simply being an off brand homage to the music of the past. It tells its own tale, dynamically shaping the soundscape of Zoe’s adventures and tribulations.

Additionally, Elden Pixels has handled the control setup of Alwa’s Awakening wonderfully, including how the character responds to things. Many, including myself, may be a bit surprised by the floaty nature of Zoe’s jumps the first time that you step into her shoes, and may even feel she moves a bit sluggishly. However, you quickly see that it matches the tempo of the world, of all manners of skeletons, slimes and giant, polymorphing boss fights that you have to deal with in different degrees. As Zoe gets stronger, there’s a clever way to toggle between the different spells, allowing you to easily drop blocks, conjure balloons and, most importantly, throw lightning without tripping yourself up. There’s an expectation that you’ll be able to master the art of movement and action in the same go, and sometime creating action in midair in order to get the best results of your exploration. It’s something satisfying to master, and it’s something you NEED to master, because Alwa’s Awakening is hard.

This is where the modern-day tweaks of the game come into play. There are save spots that are necessary for respawning, and they’re relatively far apart without being unfairly spaced. When Zoe takes three hits without getting a heart drop from an enemy, she’s done, she’s dead, and she needs to start over again from the spawn. Sometimes it’ll take you about a hundred deaths or so before you can even make it to the Vicar and deal with his nonsense, and I know this because the game has an active death tally. Yes, that wonderful hallmark of shame is front and present here, as glaring and delightfully angering as it was in Celeste, and serving the same purpose. There will be times when you need to figure out, through process of elimination, the when and where of certain fast fingers in order to conquer rooms of sizeable gaps, spiked walls and missile spewing fixtures. You die here, it sucks, but hey, at least it makes sense. But when you simply flub the controls because you essentially sneezed and jerked the joystick, the error hurts plenty: the additional tally to the count hurts even more. Well done, Elden Pixels, I’m a bucket of shame now. 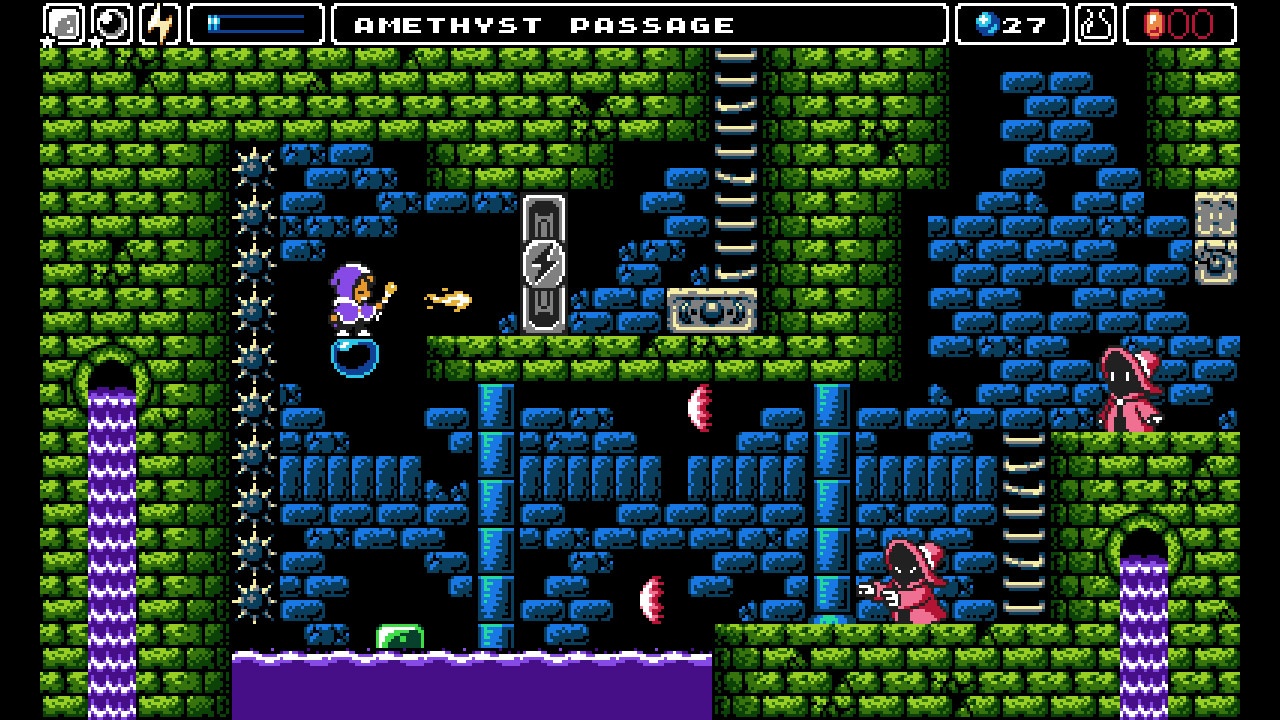 There is one rub to Alwa’s Awakening, and I’m not sure if it’s totally a negative point or not. You see, at the time of this writing, I’m confident that I could make it at least to Death Mountain, with the appropriate equipment on hand, in Legend of Zelda without consulting any sort of map or guide. I might need some help getting through the final dungeon just in terms of rooms, but even that’s negligible. The reason I can do this is because I’ve played it a ton and have the layout ingrained in my brain instead of useful stuff like math or science. After your first play of Alwa’s Awakening, you have a general map in your mind, and things become easier and more fun. Like the original Nintendo adventure games, this is one that gain enjoyment from multiple plays. But that means the first one is an ENORMOUS pain in terms of flow, choices and orientation. It took me close to nine hours to get from start to finish, which is mostly because I’d see something, want to double back to find it, but not remember a clear path on how to get to that other room that should, theoretically, just be above me. This game is loyal to the 8-bit generation down to the annoyance of needing to discover everything appropriately in order to actually get good at the game. That’s pretty smart, and also a tad smarmy. I’m on my third playthrough now, so I suppose it’s not a total negative, but it still rankles in my brain a bit.

Lastly, there have been some nice touch ups to the Switch version. HD rumble exists on a nicely gradient scale, which feels like it was made specially for me and my constant bitching about overactive rumble. Additionally, there’s a new Assist Mode, which the devs feel make the game significantly easier, and I would disagree. It does add some really helpful stuff, like mapping out where items are ahead of time on your map, and allowing you to respawn exactly where you died instead of at the last save point. Assist Mode might actually be a great way to play the first time, and then drop the training wheels in order to play through on your own. Finally, a lot of bugs have been ironed out and the game is generally smoother, which means everyone who did speed runs by having weird, glitchy jumps can go straight to hell because that isn’t happening anymore. Sorry crew.

Alwa’s Awakening was a really cool trip down memory lane in a car that I had never driven before. It’s wonderfully presented, solidly performs, has a minuscule footprint on my NAND and actually inspired multiple playthroughs despite there being no roguelike elements. The game might be a tad tough, but that’s actually in balance with the game’s message, meaning and style. The story is small but enjoyable, and I really liked watching Zoe grow more powerful and lean into her destiny as it rushed up towards her. In the end, I want to be a hero like her, and any game that can make a grown adult imagine that scenario is a big winner in my book.

Inspiring, enthralling, and frustrating in a positive way, Alwa’s Awakening really does capture everything that made the NES great, but in it’s own accord.