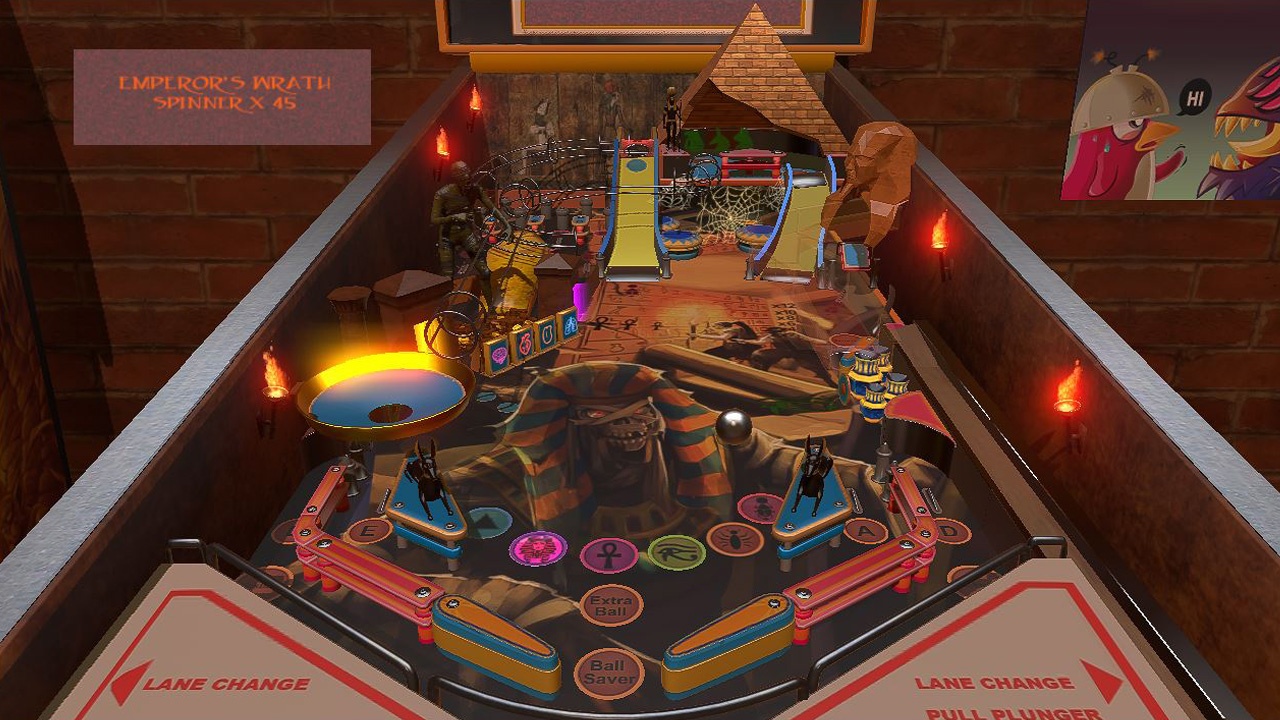 I really have to give credit where credit is due: it seems like EnjoyUp Games is actually listening to criticism and concern regarding their pinball titles. We’ve come exceptionally far since Jurassic Pinball launched, and the little Spanish-based company has been pumping out titles, large and small, to try to entice budget-conscientious players for the last year and a bit. I’ve played all (or I think all) of their pinball tables so far, and the latest entry, Mummy Pinball, shows a good amount of growth and awareness. In fact, I would go so far as to say that this is the first one of their creations that I would strongly suggest picking up for pinball fans.

Mummy Pinball is set on a table that’s somewhere between the Brendan Fraiser vehicle from years back and the strange Tom Cruise reboot we attempted more recently, with a good dash of the classic Karloff interpretation for visuals. I don’t think there’s anything wrong with the original vision of the Mummy, but the modern versions that are more active and crazy lend themselves to more exciting presentations. We’ve seen that the shambling dead is great and all, but also only as dangerous as being stuck in a tight space or having a hurt leg. Anyways, the table puts you somewhere in Egypt, presumably digging around in a forgotten pyramid that you shouldn’t be in, and you constantly run the risk of awakening the Mummy and unleashing hell upon the Earth. Probably. Pinball tables aren’t known for their dramatic storylines, but through the missions and objectives you get the impression that you are a.) digging things up and b,) will regret it. 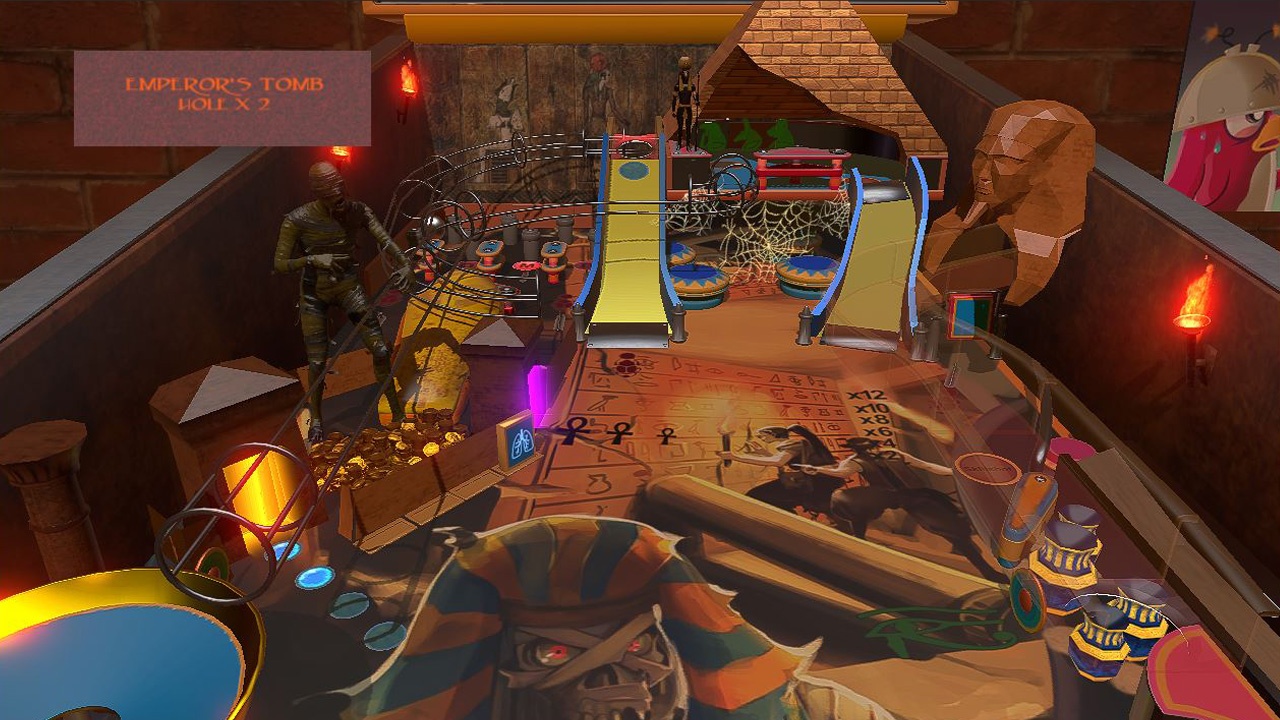 Table wise, Mummy Pinball has a pretty solid design with a few interesting twists. There’s two and a half flippers, with a right side mini-flipper to help boost into the bumper pool and some of the back-end secrets. Everything is done up to look like you’re inside the tomb, complete with a blackened Mummy creature that stalks the left side, swatting futilely at your ball when you enter the secret chamber or the Emperor’s Tomb mission. The lanes are mostly clear, and the return chutes are something fun and creative. On your left, you have a traditional suspended bridge that leads to a funnel which sucks your ball down to the left flipper, complete with a magical kind of effect to make it spooky and mystical. The right bridge is entirely invisible, which really, really screws with you the first time you realize it. Initially you just figure “oh, okay, no tunnel, cool” until your ball gets returned floating above the board. It’s definitely a dope effect, but players should be aware of it because you can easily drop a ball if you’re not aware how your ball is returning. Still, it’s got a nice spark effect when the ball comes rattling down, and you’ll understand and be ready for the mapping by the second return.

Everything here is still bread and butter at the core. The flippers are tight and responsive, there are several missions that require patience to unlock (hitting the far bumpers about 64 times seems excessive but is quite simple with good shots) and you almost always get two tries for each ball. The window that EnjoyUp Games gives players to have a ball save is quite wide, so new players should have no excuses about missing a shot and veteran players would do well to analyze the timing so they can abuse it for a free volley into the upper register. The shoulder buttons are for flipping, the minus sign changes view while plus pauses, and nearly every other button is nudging, so be sure to really pace yourself with button frustration. Each launch gives you two warnings before the table tilts, and, utilized correctly, these nudges can help knock out several missions pretty quickly by keeping your ball in a tight pocket of scoring glory. 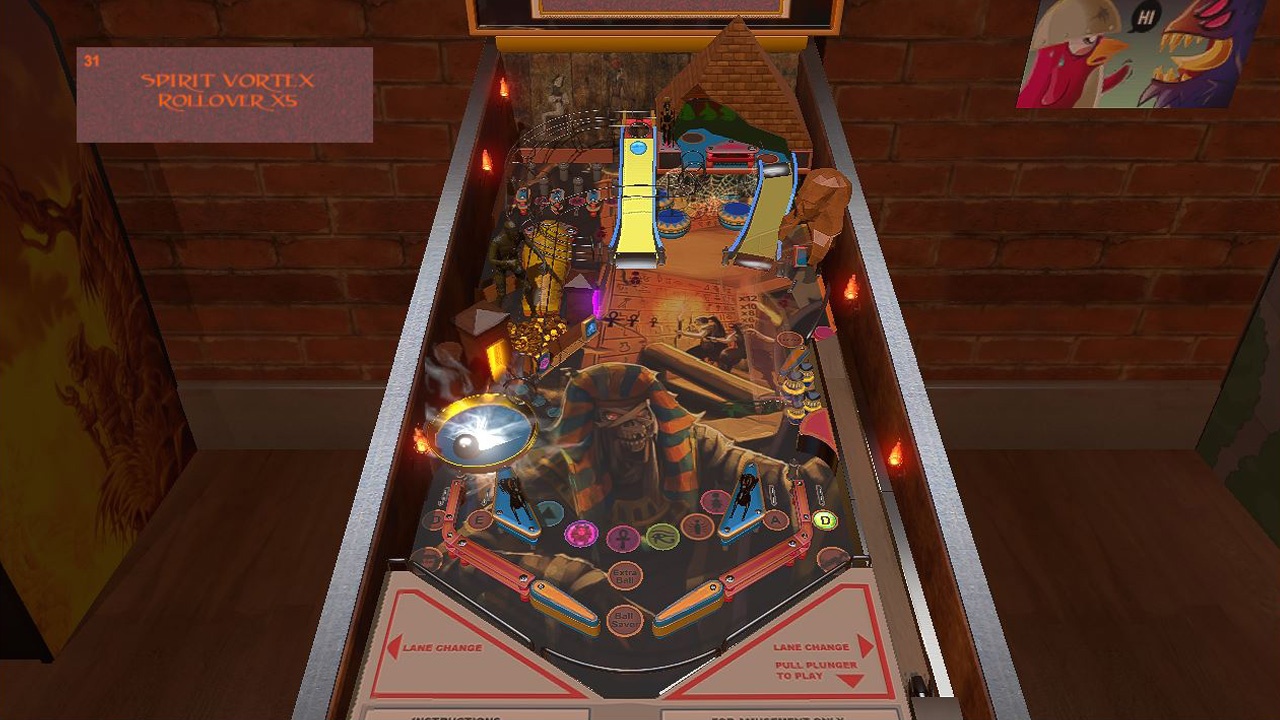 There’s a lot to like about Mummy Pinball. This presentation is still more in the retro corner than anything else, complete with monochromatic display for the high score and the missions activation, but there’s some chill atmosphere going on with the music and the unlocking of higher scores. I really appreciate the attention to detail with various sound effects, the Mummy’s movements and the overall cohesion of the table. Moreover, rather than try to change things outlandishly to try and evolve the pinball game into something “more,” EnjoyUp Games simply chose to have a good idea, polish it to a sheen, and, oh yea, have online ranking. This is the first time that I’ve really seen the board light up with players across the world, showing that the cheap gameplay style is gaining traction, and, sometimes, dropping a couple of bucks for a fun title is all you really need to enjoy yourself. Players don’t need powerups, custom avatars or any number of achievements. Simply making it so the game is enjoyable, affordable and accessible (not to mention having a decent icon) creates the incentive to get it.

Mummy Pinball is, hands down, the best pinball title so far from EnjoyUp Games. If you’re looking for a replayable table and don’t mind another game installed on your home screen (fingers crossed for folders in the 6.0 update), then I would absolutely recommend grabbing it at your earliest convenience. There’s nothing to lose, everything to gain, and it’s a pretty great experience overall.

A pretty solid pinball table, EnjoyUp seems to have the formula for a good game totally under wraps.