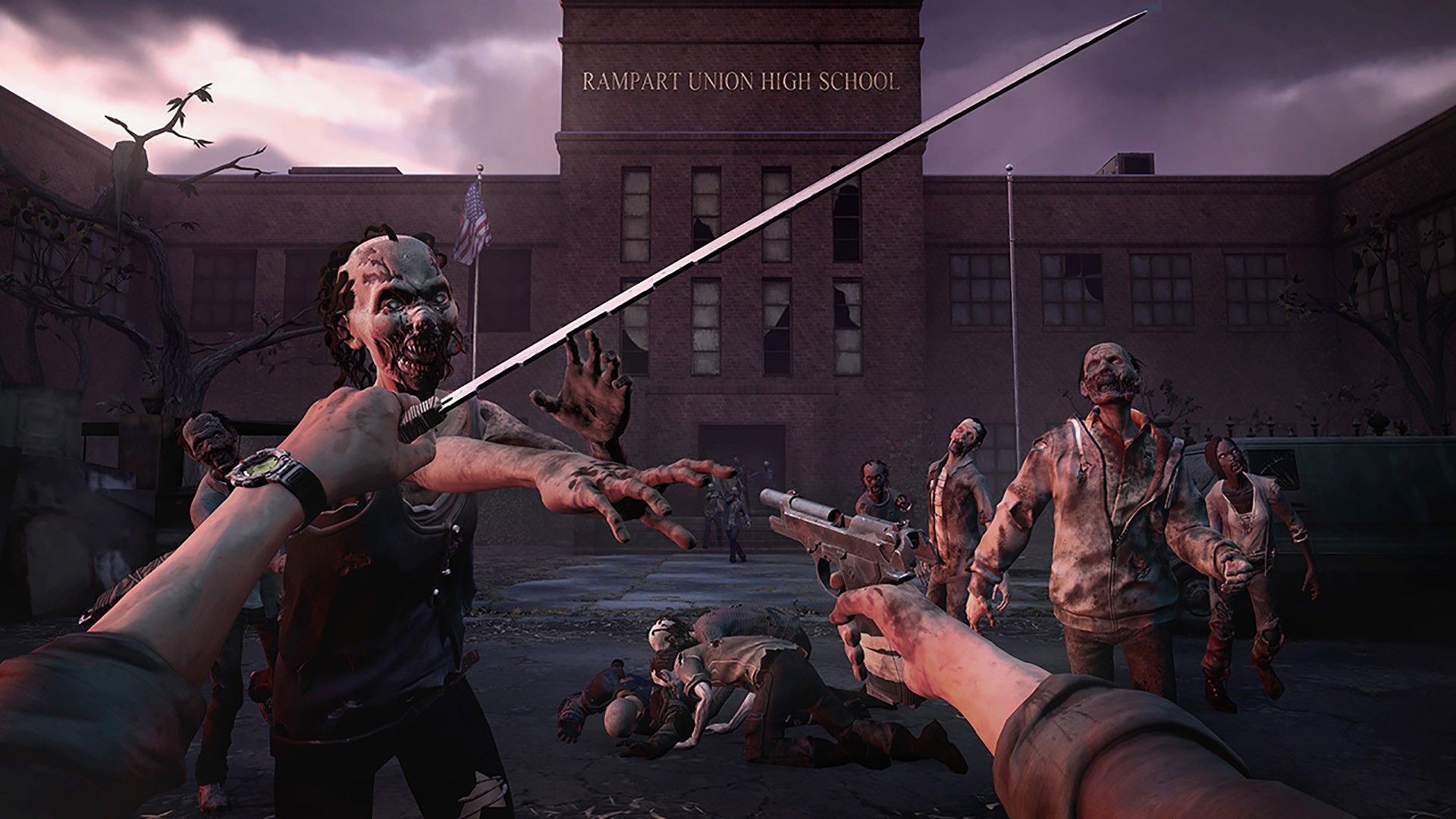 Saints and Sinners is perhaps the biggest surprise in years. Not only is it the best Walking Dead game ever, but it’s also the best zombie and VR title in recent memory. Its ability to be utterly terrifying without relying on jump scares is an impressive feat, and it doesn’t barrage you with constant references to the Walking Dead universe, yet it feels absolutely a part of it.

New Orleans, despite being overrun with walkers, feels completely unique when compared to the rest of the Walking Dead world. Flooded streets, a menacing tower run by a new, formidable human threat and run-down towns make up the playground of Saints and Sinners. And while there’re walkers aplenty to decapitate, equally captivating is the humans you interact with and the stories that weave throughout the zombie infested waters.

Taking up the mantle of the Tourist, a hardened survivor and outsider to New Orleans makes for interesting and unexplored territory for the Walking Dead. There’s very few shout outs to the universe as a whole, but over the 15 hour campaign, interacting with survivors, trying to make it through each gruelling day and exploring the human stories that make up the new and fresh groups in Saints and Sinners is entirely captivating.

Granted, there’s not enough time to develop stronger bonds garnered through the complexity of hundreds of hours of watching the likes of Rick and Glen in the show, but the named NPC’s are interesting enough that you feel pangs of guilt if you lead anyone likeable to a grizzly death. 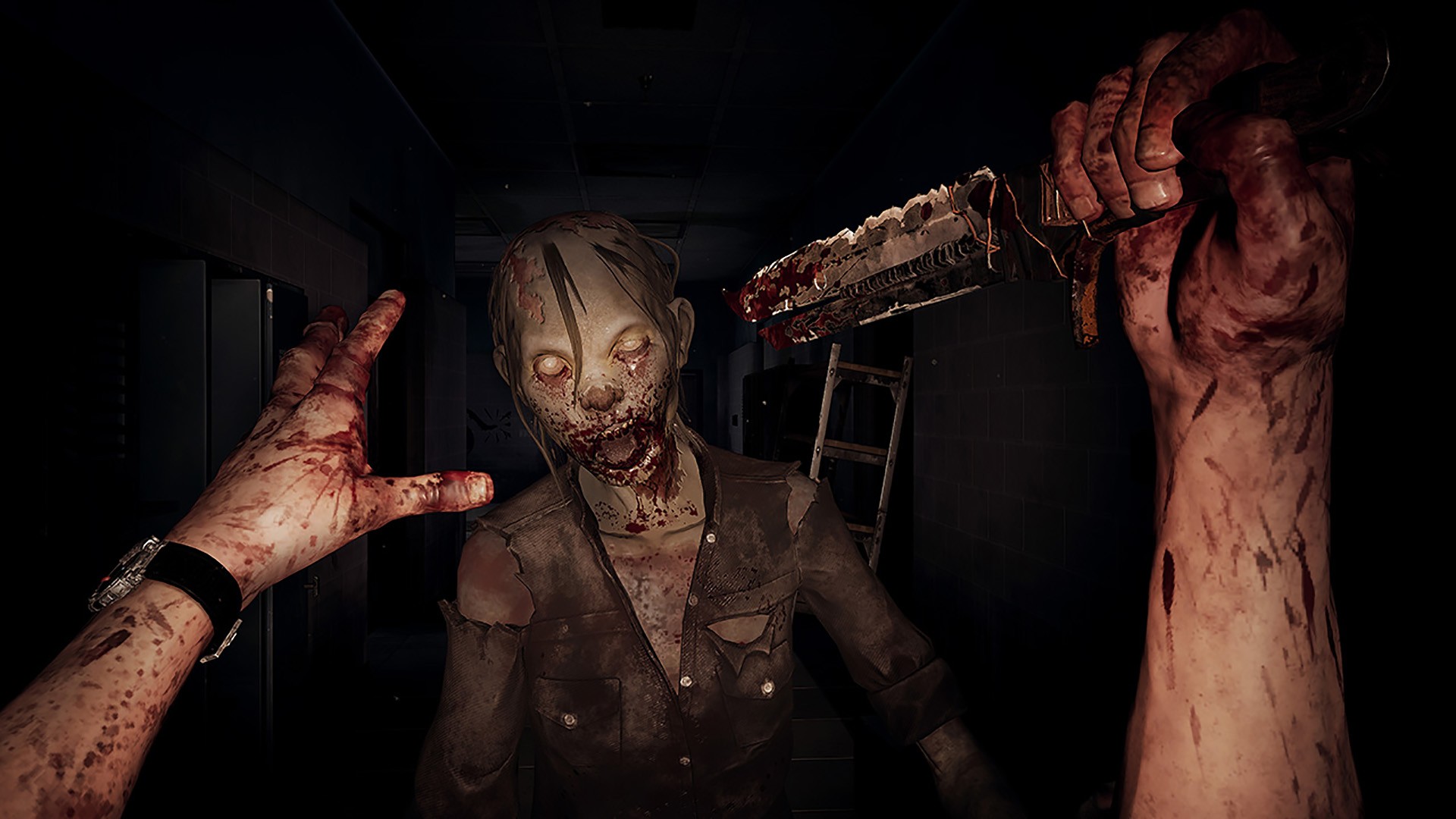 It’s because, in the same vein as Telltales storybook adventures, Saints and Sinners is all about making meaningful choices. Sometimes, choosing to side with the wrong person or group will lead to the grisly death of a bunch of survivors, and other times, completing missions for NPC’s will lead to new weapons and crafting equipment to help you survive for long in the wilderness of New Orleans.

Weapons come in all shapes and sizes, with many guns, baseball bats, knives and Bow and arrows making up your arsenal. The true joy is pulling off incredibly satisfying combinations to take out walkers, and the options are almost limitless. Want to quickly draw your revolver and take out a walkers kneecap before finishing him off with the butt of your gun? Go ahead. Smash their brains in, punch them until they’re a bloody pulp, slice and dice or pull off their limbs. It’s incredible just how much you can do, and the game pushes the boundaries tenfold. If, instead of experimenting with gross kills you want to focus on just using a gun, it’s also some of the best gunplay I’ve experienced in VR without using the Aim remote.

But getting hold of weapons isn’t always that easy. In fact, you start out with almost nothing. You’re holed up in an old school bus, a safe space to sleep, review your objective and, most importantly, craft weapons and ammo. When you aren’t moving through waves of walkers and sneaking through enemy survivors lines, you’ll find yourself exploring the rotting remains of New Orleans suburbs and swamps, looking for crafting material to improve your arsenal. While crafting is easily completed with a click of a button, getting enough bits together can be painful early game. Luckily, if you have your heart set on a specific piece of equipment, you can always track what you need to make things easier and quicker to craft.

Exploring this new frontier is one of the most satisfying VR experiences I’ve had. I’m always weary of VR games that don’t offer a teleport option, especially as I’m prone to motion sickness, but the buttery, smooth tracking is almost always enjoyable and problem less.

That being said, turning is slow, and until you’re completely comfortable with the controls, it’s easy to get surrounded in confined spaces if you don’t shuffle around quickly enough. It’s a peril of many VR games, but one that doesn’t become more than a bugbear in Saints and Sinners. What’s more frustrating is getting to grips with, well, gripping your equipment. You can keep two weapons on either side of your hip and a larger one on your back. That’s on top of a flashlight on your left breast and a journal on your right. Oh, and I haven’t even mentioned your backpack, which is directly next to your larger weapon on your back. While the attention to detail is admirable, and you need all the listed equipment, it takes a fair bit of accuracy to grab the right item you’re going for. There’s nothing fun about reaching for your shotgun in the middle of a hoard of zombies, only to accidentally pull out your backpack. 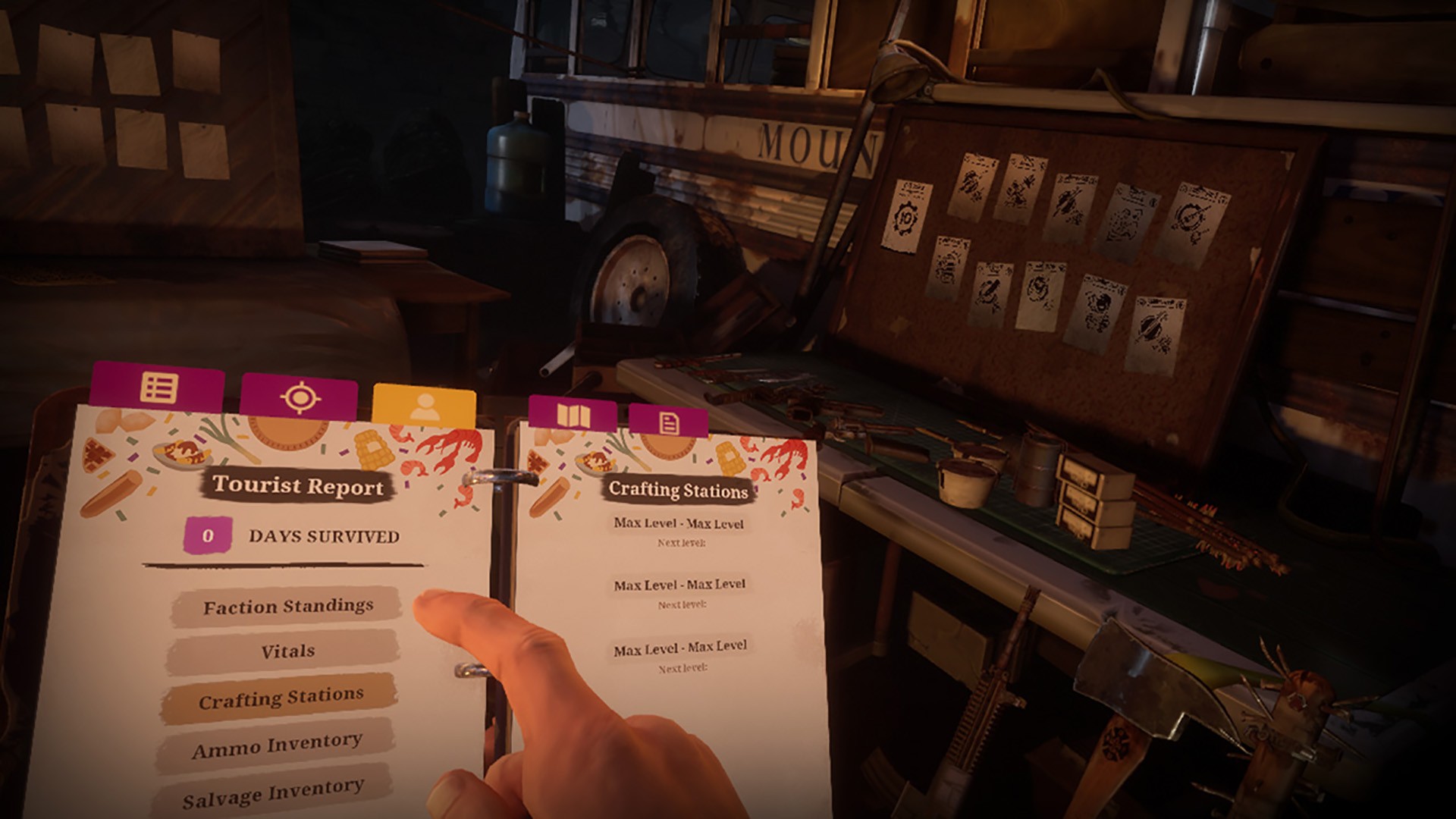 All gripes aside, it’s a drop in the ocean compared to how satisfying the game actually is. Climbing up buildings one hand at a time, crawling through windows, sneaking around zombies when you’re low on ammo – it’s all incredibly effective, and it all feels natural. It’s some of the most absorbing VR gameplay I’ve experienced. There’s absolutely nothing quite as terrifying as slowly creeping through an abandoned house, accidentally tripping a homemade trap and alerting a houseful of zombies to your presence. It’s a uniquely terrifying experience.

One thing that makes Saints and Sinners such a great game is that it’s an absolute visual delight. VR is without a doubt an incredible advancement of modern technology, but it’s still early days, and often virtual reality games look like PS1 ports. Instead of going hyper realistic, Saints and Sinners is clearly inspired by the Walking Dead comics, and the streets of New Orleans look like they’re ripped straight from the pages of an Image Comic. It doesn’t make it any less gruesome; smattering yourself in bloody bits and entrails to sneak through a horde of zombies is every bit as grotesque as you’d imagine, and it never spares on gore.

A lot of players might be put off by the AAA price tag, but it’s warranted when you consider you’re getting a full campaign with multiple endings, and the recently added survival mode. The latter does what you imagine, a horde-based survival mode to see how long you can survive an endless supply of walkers, but if you enjoy the game as much as me, it’s great to pick up and play when you’ve completed the main campaign.

Without a doubt, Saints and Sinners is an unmissable experience for zombie fans and VR gamers alike. It offers some of the most satisfying, versatile action available in a virtual reality title, with tonnes of that moody, Walking Dead character that has made the universe so popular. It’s a beautiful, bloody mess.

REVIEW CODE: A complimentary PlayStation code was provided to Bonus Stage for this review. Please send all review code enquiries to press@4gn.co.uk.

Saints and Sinners sis easily one of the bloodiest, most captivating VR titles in history