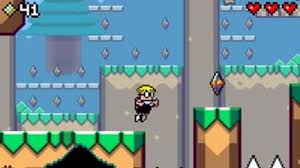 Mutant Mudds is an incredibly simplistic game; you make your way around a collection of relatively small levels, shooting enemies, collecting diamonds while jumping about a bit. If you wanted to be negative about it, you could say that you have seen everything Mutant Mudds has to offer in the first 15 minutes. That’s arguably true, but when a game is as utterly charming, enjoyable and downright addictive as Mutant Mudds is, honestly, a bit of repetition really doesn’t hurt.

With its delightful art style encapsulating the best of 8-bit and 16-bit era visuals (developer, Renegade Games ingeniously refer to Mutant Mudds as a 12-bit platformer) and its genuinely fantastic chiptune soundtrack providing a nostalgic but always catchy accompaniment to the core gameplay mechanics, Mutant Mudds delivers a relatively simplistic experience, but one achieved via a degree of polish and love that help to make the game so much more than the sum of its parts.

Despite its array of worlds and levels, completing Mutant Mudds at the most basic level won’t actually take you all that long. Despite providing a relatively hefty challenge, Mutant Mudds’ levels are all relatively brief. What makes them last is the array of collectibles that, while of little use, are portrayed in such a way that collecting them all is a challenge that few will be able to ignore. On top of that, each stage is also home to a well hidden secret challenge room that, while incredibly brief, does provide a stern additional challenge. With the door to each stage providing a space for each of the three levels of completion, I for one was compelled to see each stage completed to 100%. 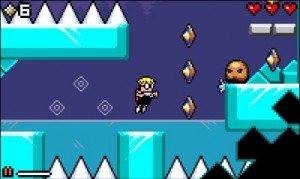 Of course, all those collectibles would count-for-naught if the gameplay wasn’t up to scratch, but here, Mutant Mudds excels. It’s all basic enough, but everything works perfectly well with the gunplay wisely kept as basic as possible and your jet pack offering up just enough juice to give you a little room to manoeuvre on some of the more difficult platforming sections. Stronger weapons and additional air-time are unlocked later in the game with the bazooka allowing access to each stages’ secret level, but from the first to the last, the gameplay rarely strays very far from what works.

Strangely enough, Mutant Mudds’ biggest draw (arguably), is one of its more ineffectual additions. Via strategically placed boost pads, you can jump in and out of the foreground and background as you explore the three planes that make up each level. Saying that, while this system doesn’t add a great deal to the core gameplay, it does provide one of the finest uses of 3D to date and something of a unique visual spectacle that helps to bridge the gap between the old school design and current-gen technology. It doesn’t have anywhere near the kind of effect that Fez’s 3D twist on 2D gameplay had, but as a visual treat alone, adds more to the experience than one might expect. 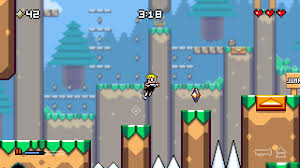 I could spend a paragraph telling you about the threadbare story framing this rather wonderful little experience, but honestly, there is no point – if you have any interest in platformers or Nes/Megadrive era visual design, Mutant Mudds is well worth a look. Mutant Mudds Deluxe does offer an array of additional challenges and the chance to play as Max’s grandma on the PS3, Vita and Wii U, but honestly, I would go for the 3DS version thanks to the brilliant use of that platforms most prominently unique feature. It’s a fantastic experience on whatever platform you decide to go for, but Mutant Mudds was obviously built with the 3DS in mind, and it’s there that it feels most at home.