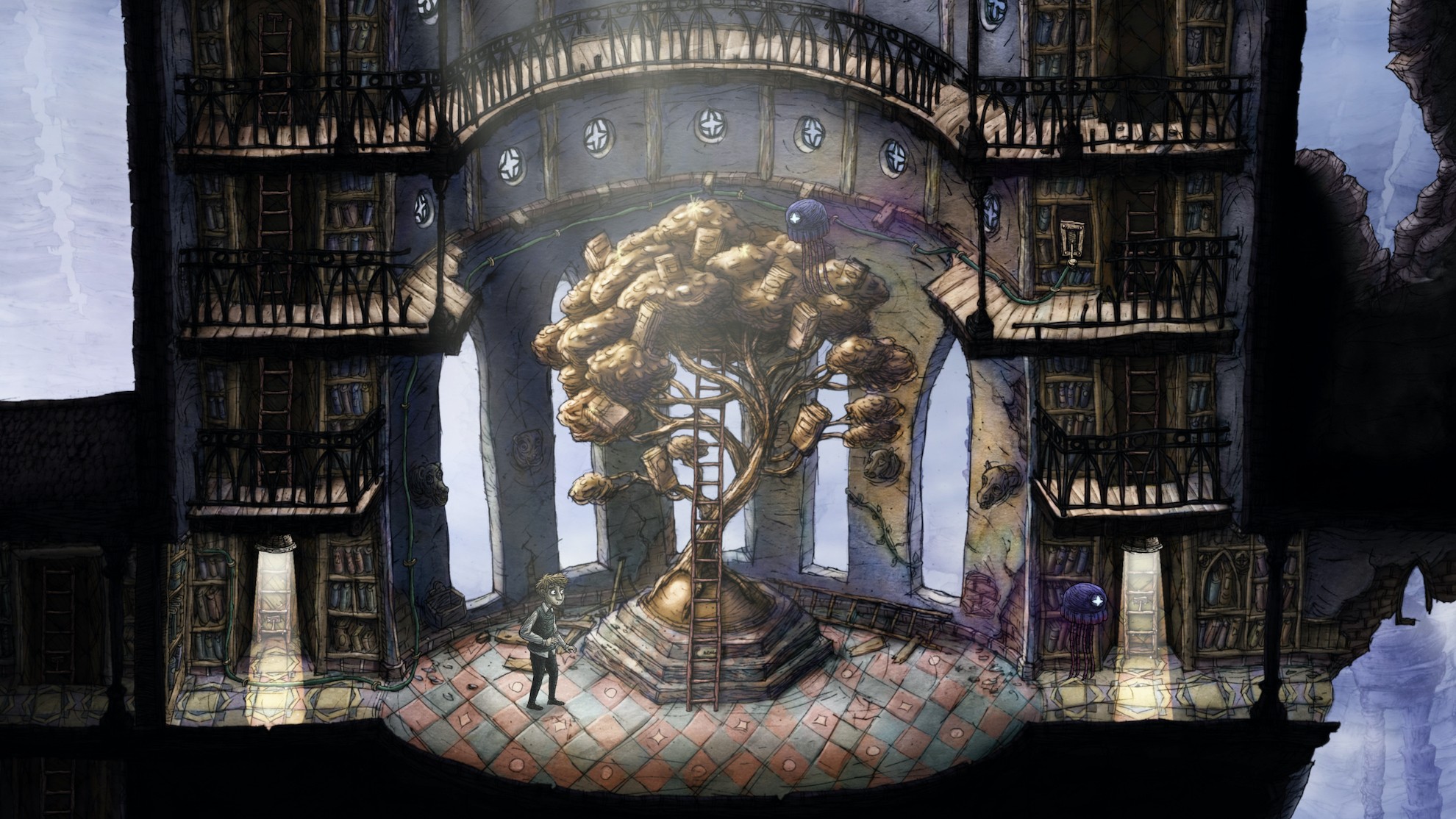 I love anything to do with the Brothers Grimm. The lore, the dark imagery and the ease it transfers to the gaming industry. Developers and publishers Amanita Design has created their first non-point and click title. Having created Machanarium and Samorost, they now venture into the world of adventures. Creaks is a dark and eerie Grimm esque puzzle title. It asks you to explore a mysterious subterranean world while aiming to make it to the mansion in the middle.

The story opens with a grainy, hand-drawn image of our protagonist attempting to work at his desk. He is distracted by a flickering light and peeling wallpaper. This odd opening ends with a pop of a light and the failing wallpaper revealing a secret doorway. Armed with only a torch, he plucks up the courage and enters. He discovers a ladder and climbs down, an almighty bang, and the world shakes. He descends the ladder as quick as possible. The camera zooms out and the vast subterranean world is revealed. This is your home for the foreseeable future.

The large world map has been compartmentalised. Each smaller section comprises several puzzles to overcome. Like with all good puzzle titles, there is a gentle learning curve. It gets more difficult as the game mechanics vary, and additional elements are added. Pulleys, sliding doors, switches and pressure plates help you solve each problem. If you fail, the action will roll back to the last checkpoint at the start of that area. The enemies are the Creaks, who want nothing more than to cause misery and destruction. The Avians are your friends; they are the creators of the world you are passing through. They will do whatever it takes to protect themselves from the Creaks. 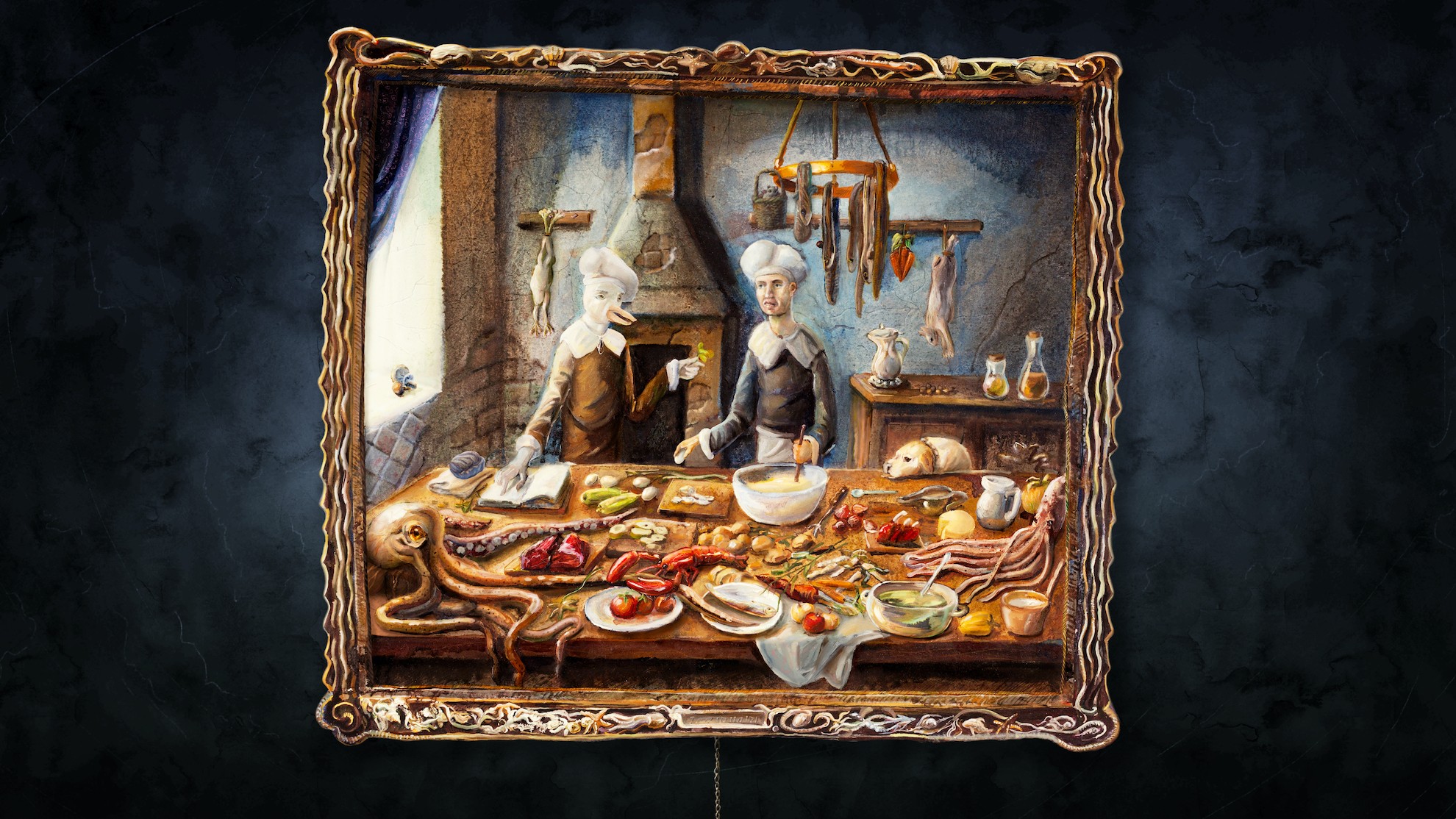 As you explore, you will experience the world shaking, and dust will fall from the ceilings. You’ll catch fleeting images of a humongous cat-like being that terrorises the Avians. It’s the classic cat Vs bird scenario. The birds were foolish. They had captured the cat and used him to power the underground city. It was a great plan until; he broke free of his prison. Angry, and full of hatred, he now wants nothing more than to reap his revenge on his captures. It’s ironic, birds capturing a cat and making it live in a cage. There is a fair bit of poetic justice in that.

You get the idea of the world you will experience. It’s odd, creepy, and fraught with danger. The Creaks take several forms, a robot dog, a floating jellyfish, and many more. The dog will chase you when you approach it. When it senses that you are gone, it returns to its bed, relaxed but ready to defend its territory. The dog can be stopped in its path using light. If it enters, it transforms into a piece of furniture that you can be moved and used to reach high places. The main premise of the game is to manipulate the surrounding environment to proceed. No matter how far you advance in the title, the fundamentals didn’t alter. Move from A to B while opening doors, powering lights, and dodging robot dogs. I was reminded of The Lost Vikings where set moves have to be completed in a specific order before you can proceed. It was a strong foundation to base your game around, and it transferred perfectly to this title.

This is a dark and grimy tale, and the visual representation supports this. Its colour palette and tone makes the world feel dingy and claustrophobic. While the hand-drawn images of the world and the characters could be placed in a children’s book. The crisp and well-defined lines make the action easy to follow. And there is no confusion regarding the limitations of each puzzle. The subterranean land that you explore is decimated. What was once a thriving community is now scared to leave their run down shelter. The Creaks have smashed the land to pieces, ladders that are used to move around are broken. Floors have gaping holes that you must leap, and the walls reveal sheer drops. The world was reminiscent of a war-torn landscape. Its grand status is now lost forever.

The mixture of creepy and eerie sounds has been created by Hidden Orchestra. A unique and original soundtrack creates this dank and dark perilous atmosphere. The game contains no spoken or text narrative. The story and emotion are conveyed by the use of sound. You sense the danger that Avians face and feel the world shaking as the cat-like creature is on the prowl. The graphics and audio worked in harmony to deliver the theme, which successfully creeped me out. 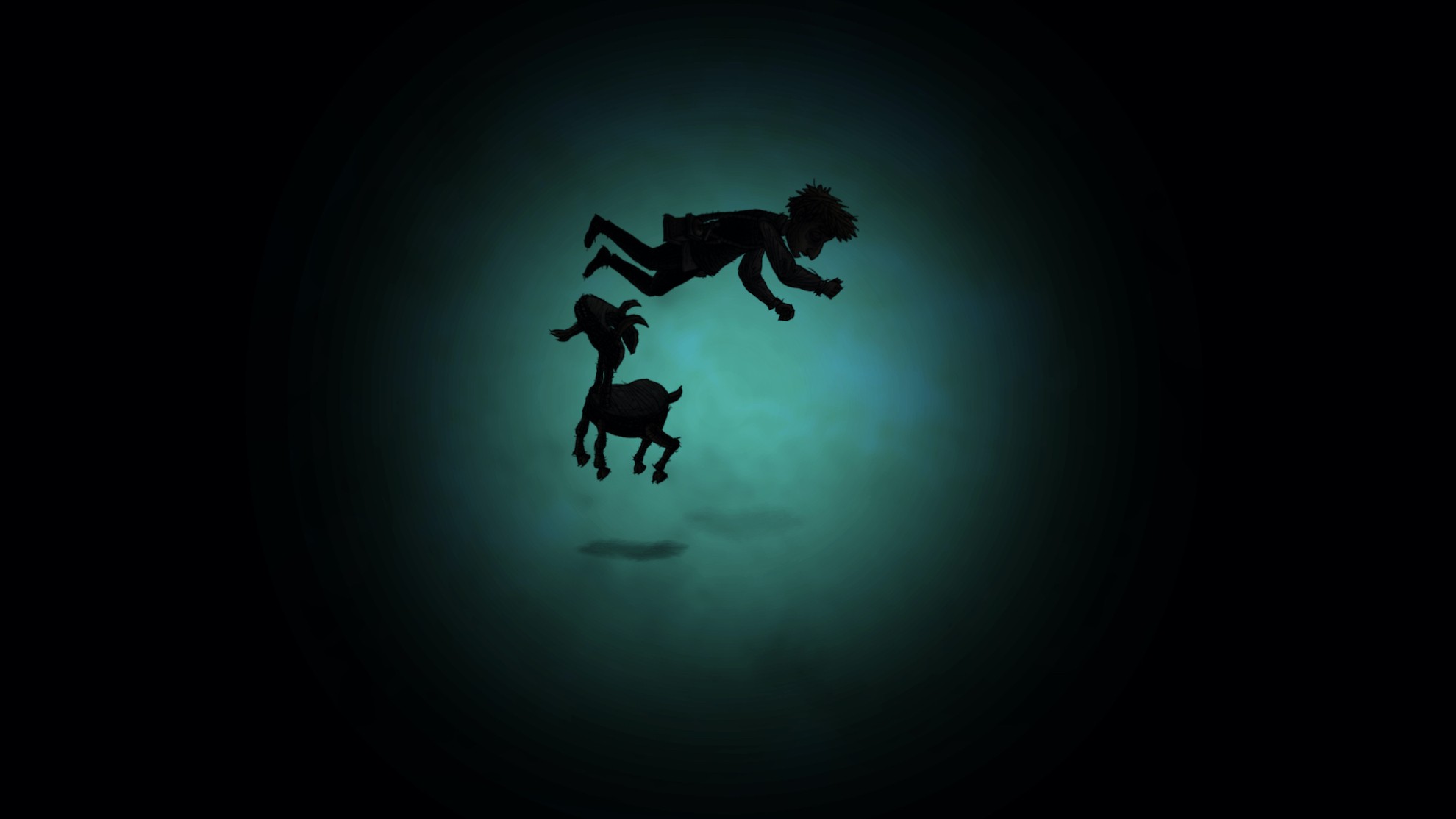 Creaks is an adventure puzzle game where accuracy is important. If you cannot move the robot dogs will get you. If you don’t open doors and flick that switch at the right time, you won’t proceed. A responsive and simple to use control system is required to get the most out of this. That is what Amanita Design has delivered. Limited buttons are required to complete any of the tasks. The opening tutelage makes it easy to understand, and simple to master. However, the ease of the controls and the familiarity of the puzzle structures left me wanting more. I was desperate for the developers to mix it up a bit. It was fun but safe; I craved something as crazy as the setting I was in, but it never materialised.

With the puzzle element not trying anything new, would I say that you’d want to return to play this title? Yes, you would. Though each small area forces you to play the title in a linear manner. There are secret rooms, and collectables to be found as you explore, so there is plenty to make you want to return. The world is such a joy to explore that revisiting it wasn’t a chore. My only qualm with returning was the repetitive nature of the puzzles. But experiencing these was a necessary evil to relive all the other great elements.

This developer has a pedigree for creating big and outstanding games. This is both in style and premise. One of these boxes was ticked when they created Creaks. I’m not saying that the puzzle element wasn’t good. However, it failed to live up to my expectations, and the hype that the other gaming elements had created. I waited for the big “reveal” only for it never to come. The game’s creativity had plateaued. As a player who has experienced 90s gaming first hand. This was an enjoyable the trip down memory lane, even if it was just in premise. I liken this to visiting the mad hatters tea party, and nothing crazy happening. You want it to be mad, with all the insane bells and whistles. Instead, Doris serves you a cuppa while talking about her perm. This is my overwhelming thought behind Creaks, I wanted more! It could have been darker, and more surreal. I know I’m coming across as negative, and that I didn’t like the puzzle aspect of the game. That isn’t right. I enjoyed it, though it frustrated me. It wasn’t as imaginative as the rest of the game. So, would I recommend that you play this? I would! As an adventure title, it’s like walking through a classic Grimm tale. The imagery is spectacular. And the original score from Hidden Orchestra was a game changer. You need to know that it’s puzzling mechanism doesn’t reinvent the wheel. Are you brave enough to pass through the mystery door and take on the Creaks?

When a mystery door reveals itself to you, do you ignore it, or grab your torch and go exploring? Do the latter and discover the eerie subterranean world of the Avian and the Creaks.