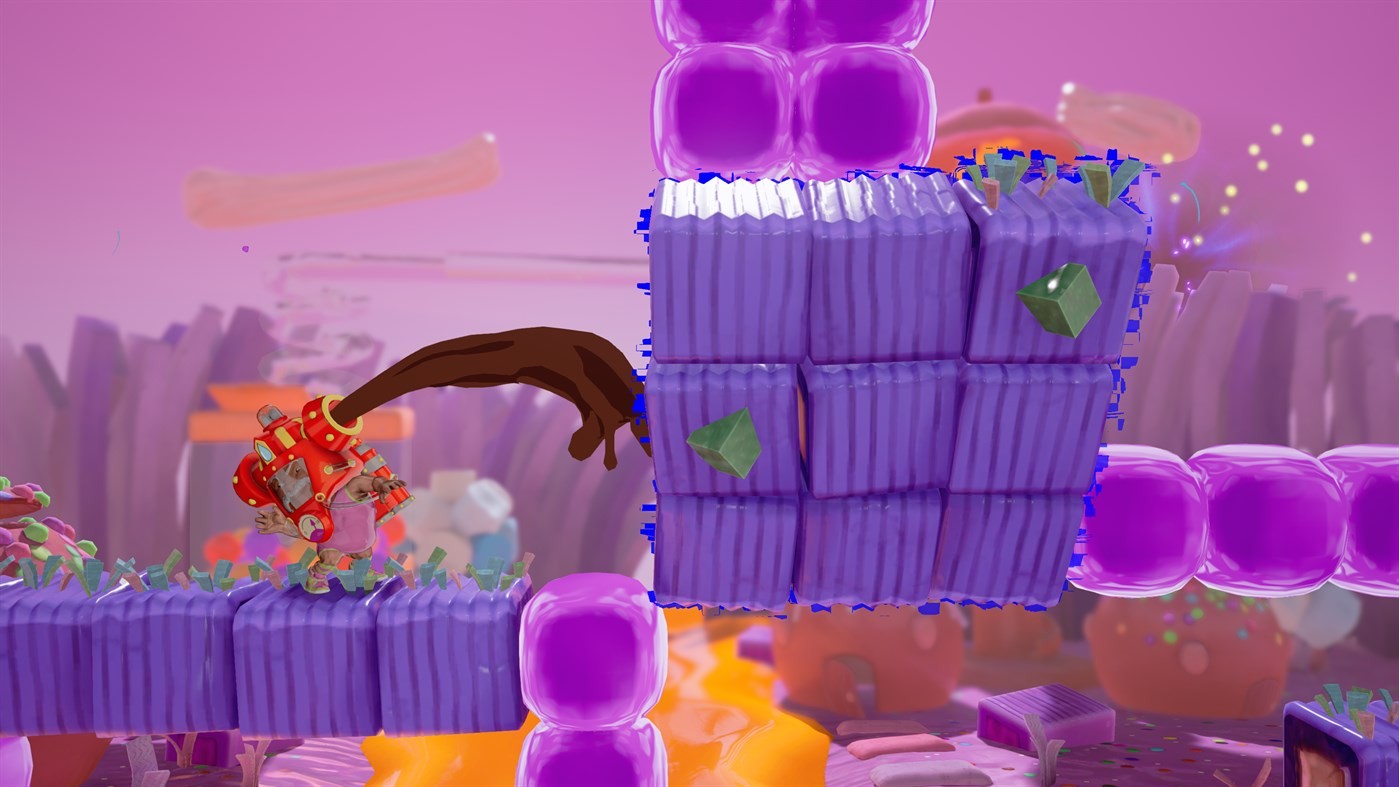 What if you had the power to manipulate the world around you, would you use it for the greater good, or would you utilise it for evil? Luckily in Busy Toaster’s latest release, Georifters, this decision has been made for you. You can move the land around you with your special powers to collect the crystals, remove the evil bugs, and complete the missions. This puzzle adventure 3D platform title has you controlling a group of amusing and zany characters across 30 realms and 300 stages, where anything is rarely as it seems.

You begin your journey as Candy, a sweet loving, happy go lucky lady who struggles to understand and accept the differences between the five bubble worlds. An unstable rift has opened up, and caused the lone bubble worlds to connect. The residents lives have now become intertwined, and they must work together to fight for the greater good. As you progress you unlock a total of 7 playable characters, each has their own unique set of powers, and abilities. You must; dodge laser beams, overcome gravity flips, hit, drag, turn, and destroy the environment to complete each stage goal. At the beginning of the world you are advised exactly what must be done to complete the task; collect a set amount of crystals from the chests, or destroy a number of bugs. You will randomly be asked to complete 10 levels in a speed run, this is by far the greatest challenge you will face in Georifters, and genuinely was the only mode that I felt sheer rage and frustration. Once you have completed your goal, you must venture to the exit portal, this will then load a new area, where the tasks will begin again. In order to finish a realm you must collect all of the crystals, if you happen to miss any it doesn’t prevent you from progressing, it just stops you from completing the game 100% and reduces the amount of points you earn at the end of a run.

You can play the main adventure mode in a solo capacity, or you can join a friend in “couch” Co-Op. This was a nice touch, and though I found that you had to have pin point perfect communication to ensure that each level was completed flawlessly, it made the game a heck of a lot easier than playing by yourself. If you find that you get annoyed or have a short fuse, then maybe work on your relaxation techniques. Mistakes will be made, and shouting is all but guaranteed. Myself and my wife fell out a number of times while playing, and I’m sure a heated debate woke at least one of the children, so take note, “You have been warned! Family feuds are guaranteed, and friendships could become strained.” Complementary of the adventure is a couch only battle mode. The battle race has you competing against up to 3 other players. The arenas will feel familiar, as they are exactly the same as the ones found throughout the main adventure. More angst can be found in one session than when you gather the family for a game of Monopoly at Christmas. The aim is to collect as many crystals as possible, while you fight to stay alive. The winner is the one who has collected the most treasure and survived the battle. The fun factor is certainly there, but be prepared for the fallout, this gets insanely competitive very quickly. 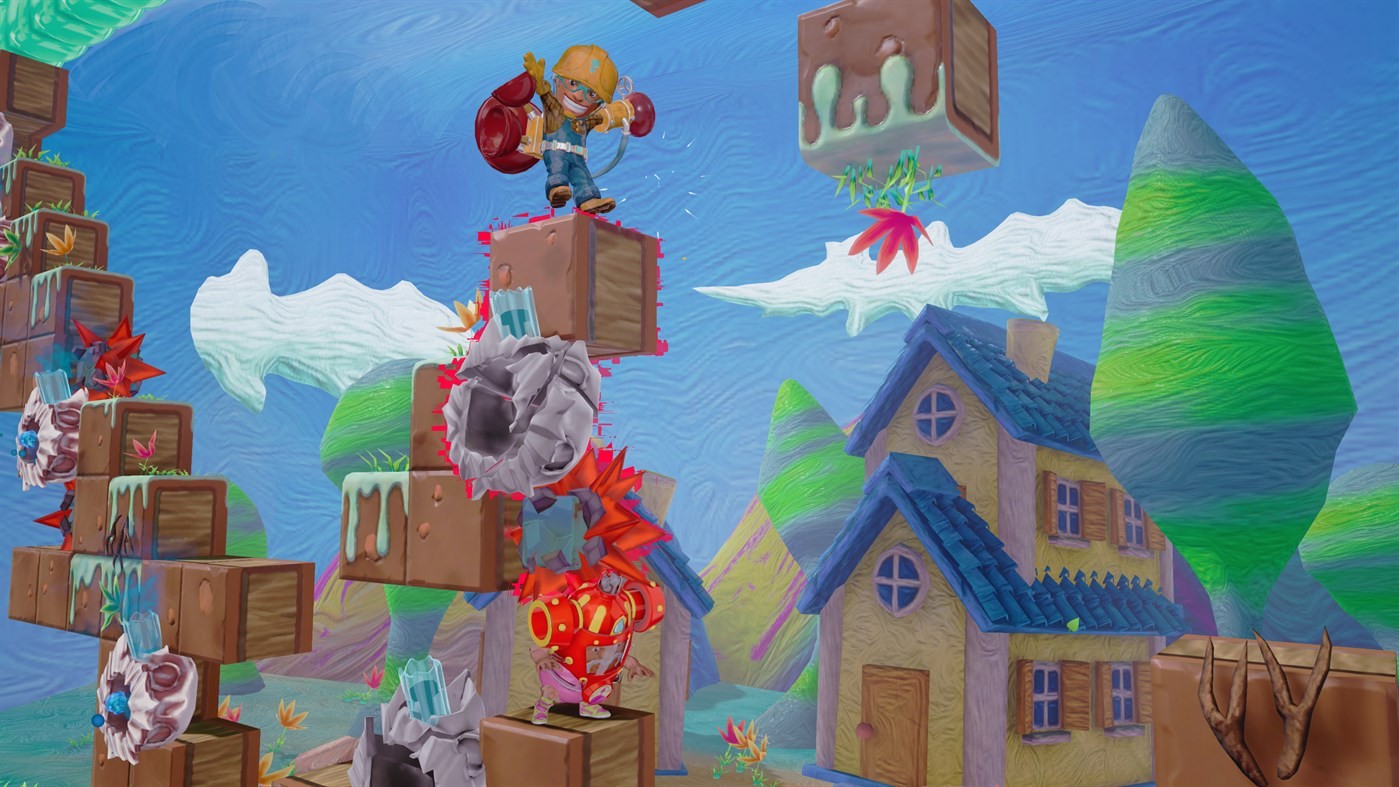 To help increase the strength of your players’ abilities, you are given the opportunity to buy special cards. You must then buy, and attach stickers that improve; movement, attack, and skills. These are a must have in the latter stages, and some will only become available once you have completed certain tasks. Currency is earned through natural progression. The amount will depend heavily on how well you have done in each run through; If you don’t die, avoid all traps, finish quickly, and more, then expect a multiplier to be applied. The upgrades are quite expensive, though they make the game considerably easier, they don’t come without hard work and dedication, so be prepared to put in the hours if you wish to have the best character possible. If you are a player who enjoys the custom option, then you’ll be happy to know that Busy Toaster has got you covered. As you unlock certain achievements, and complete worlds, cosmetic items will become available. You also have to purchase these, this time with the crystals that you have gathered. As far as I could tell, the costume changes added nothing to the gameplay, it just made you look unique, and was down to personal preference.

Georifters is as fun and bright as a carnival. Vibrant colours are used in every corner of this title. It was as if the developers had an unlimited colour palette, and decided “Let’s just go crazy, and chuck everything at it!” It works brilliantly though. It’s a visual treat that keeps on giving, everything is easy to observe, and identify. The contrasting colours make it extremely interesting to look at, you certainly won’t get bored looking at it. The action takes place on one fixed screen, and you have the option to zoom in and out of where you are positioned. This made considering your plan much easier. All movement was smooth, and the text narrative was clear and easy to read.

With this being a fun, vivid, and light-hearted game, I expected the audio to be; cheerful, upbeat, and pop esque. Fortunately, it was. The music varied between each bubble realm. It appeared that the developers wanted to add a certain style to each different character that you controlled, this gave each stage a unique vibrancy. The unusual and odd characters traits were emphasised perfectly. A mixture of fast and slow tempo, and sombre and light hearted tracks helped to build atmosphere, this was particularly noticeable in the time trial worlds. I believe that the developers have gone all out to create an unusual and fun audio, this adds a special element to the game, and helps to build rapport with the different characters. With all the narrative being conveyed through text, sadly a layer was missing. It was clear that the developers have a great sense of humour. They could have really created some memorable characters if they had decided to use spoken narrative instead. For me, it was a missed opportunity, maybe this is something that could be implemented in further DLC if the developers have the opportunity. 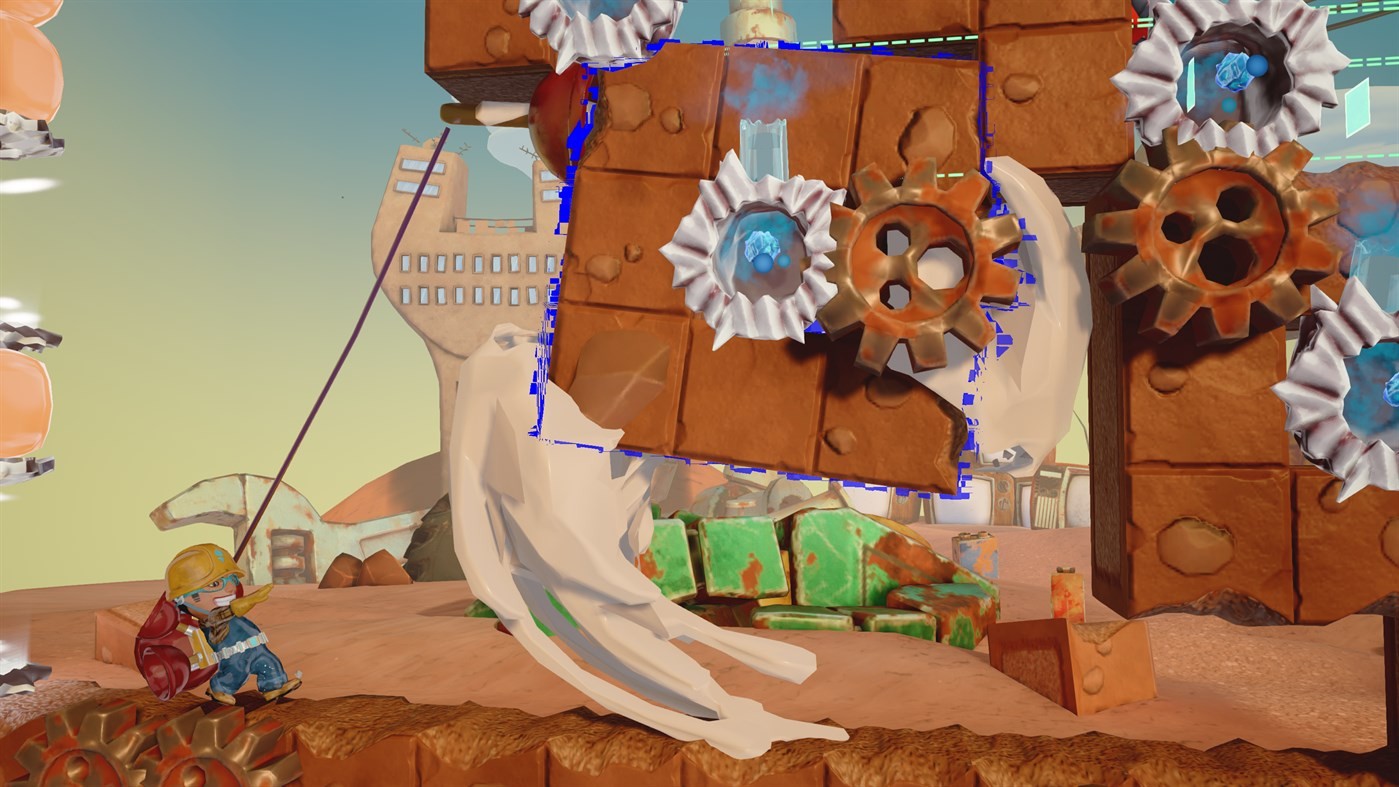 Platform games work brilliantly on console, mainly due to the accuracy of the controllers provided, and the reduced latency with button response. Georifters on the whole isn’t an exception to this rule. The multiple characters using a number of different skills require a well mapped out setup, and a very user friendly approach. One wrong move can be the difference between completion and death. Busy Toaster has clearly spent a lot of time and energy making sure that you can enjoy playing the game, and not spending hours of your time trying to master the controls. I found that occasionally I would mix up the buttons, and found that receiving a new character to play with wasn’t well explained. Trial and error was the name of the game to begin with, mix this up with the ever changing gaming mechanics for each new world, and you really have to keep on your toes. It’s best to take things nice and slow as you are getting to grips with any changes. My main gripe was that movement wasn’t always as sensitive as I would have liked, I would get stuck below one block, try to move to a gap, and then get stuck on another. It was really annoying, and ruined practically every speed run I had attempted on the time trial stages.

A massive solo/Co-Op game that has collectables, difficult stages, cosmetic items, and a number of tough achievements. Chuck in the fun local multiplayer battle mode, and you have a title that is packed with replay factor. If the developers had invested in the ability to play online, then I think that this would have been an outstanding choice. If I was to forget about the multiplayer option, then I’d say you have at least 20 to 25 hours of gameplay ahead of you. Obviously this can be increased exponentially if you have a great group of friends, who like to risk falling out with one another, all in the name of gaming fun.

Georifters is a game that I really wanted to try, but was quite reserved with my opinion before I started to play. I really didn’t know what to expect, it looked really bright and cartoony. The character models looked like they would be more at home on Nintendo than they would on either Xbox or Playstation. I’m glad I started this with an open mind. I was blown away by the gaming mechanics, and the vivid nature of the graphical presentation. The puzzle element is both challenging, and intriguing. Getting to grips with each different game style is tough and fun in equal measures. It works well as both a solo and Co-Op experience, and I believe has the right level of difficulty that it could be tackled as a parent and child team. Not too many games have that accolade. A game that I 100% recommend, its only drawbacks were; The slight issues with the controls, and lack of online multiplayer. Both of these points are me being exceptionally picky, but when you have found a gem of a game, you just want it to keep sparkling so that everyone gets to experience the fun. Can you bring the residents of the different worlds together to fight for the greater good? Only time will tell!

Manipulate the world around you, and come together with the residents of another realm. You must join forces to investigate the unstable rift, and fight for the greater good.