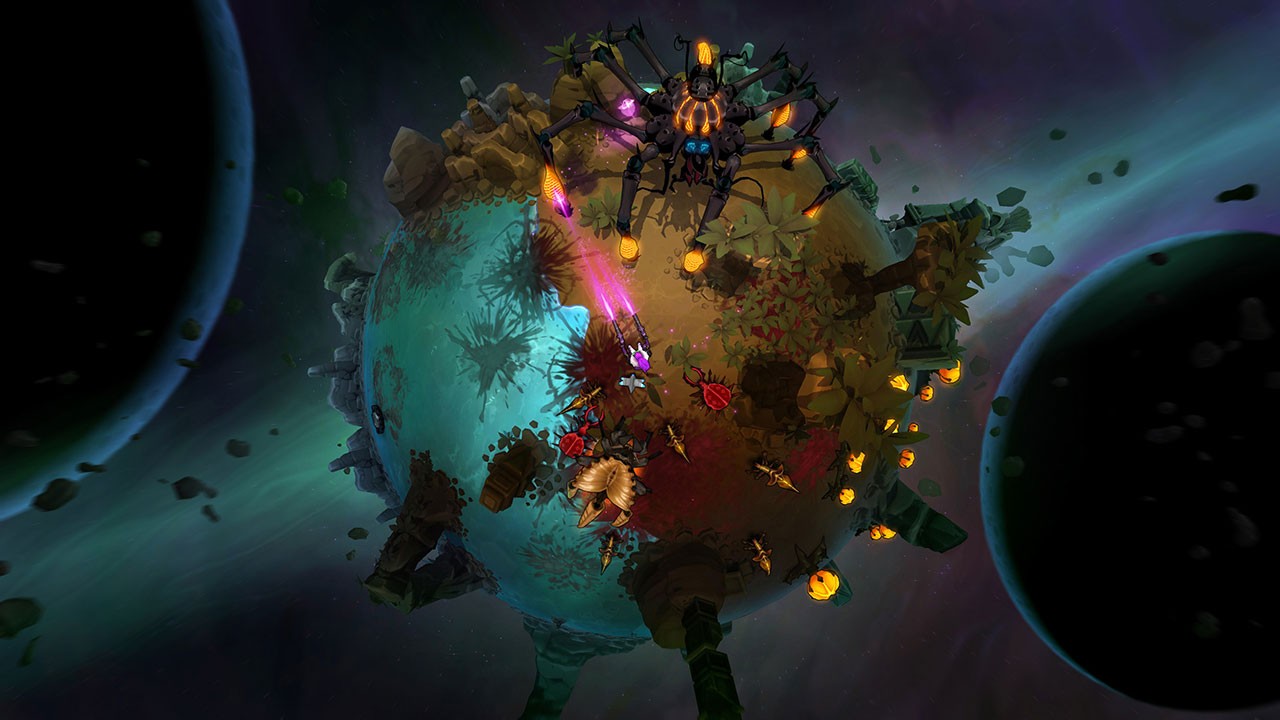 When I looked at the description of Battle Planet – Judgement Day, it seemed to scratch all of my itches at once. A top down, twin stick roguelite with permanent upgrades, co-op mode and some randomly attached power ups as you go? It seemed cool, and, from everything that Threaks, the developer, could show in the video, I wanted to get up in this game and really give it a go. Which I did, on and off, across several days.  When all is said and done, and the dust clears, the final survivor can issue a confident, clear verdict: it’s alright.

Conceptually, Battle Planet has a pretty good setup. You’re one of three escaped convicts that’s fleeing intergalactic police, and your rocket pod only has enough fuel to basically get you from one small planet to the next. Upon landing, you need to deal with different waves of enemies, traps and, eventually, bosses in order to survive and jettison off to the next planet. Part of the difficulty is that the enemy isn’t fighting fair: sure, they’re using expendable troops and the planets own hostile entities to attack you, but that’s par for the course. Another thing they’re doing is launching massive rockets at you that are set to blow up the planet you’re on, piece by piece, until there’s nothing left. The only way to survive is to defuse the bombs as quickly as you can while also taking enemy fire (and bites) from all directions. Failure to do so once isn’t the end of the world, but it does make things infinitely more difficult, as you literally watch a section of the planet get exploded, resulting in less playing field, as well as the addition of some lava beds that will mess you up if you decide to walk in them. Remember kids: good decisions to take care of things when you NEED to do them and not just when you want to means you can do what you want later, like not walk in lava.

Once the game gets going, you’ll realize that Battle Planet – Judgement Day is a mostly fun, if mindless setup, similar to our own friend Crimsonland, but with a planetary twist. You can walk all around the planet, allowing for 360 degrees of approach to both enemies and bombs, and you get to plan out your map a bit more excitingly than from just a flat arena. For example, there are blue boosters that catapult you over rock walls, and these are essential for losing trailing enemies and also putting a barrier between you and their shots. You have a limited jetpack that acts like a sprint function, which also auto-recharges, so you can plan your escapes accordingly. Be warned, though: every enemy knows the planet is both small and round, so it’s not like you can lose anyone for an extended period of time. The bugs can burrow underground and come up right underneath you, the galactic troops chasing you can teleport around, and everything is hellbent on your destruction with no friendly fire to worry about. There’s not an easy end to this story, hombre: you’re probably gonna die. 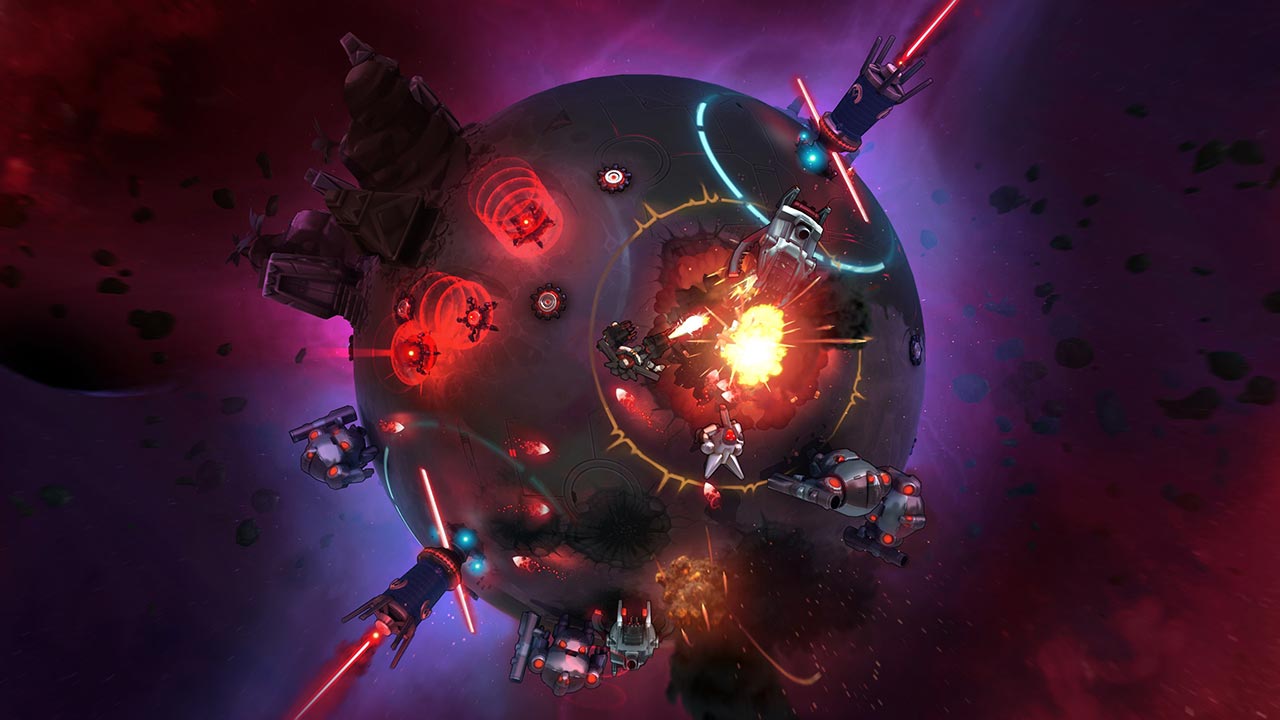 When the game sings, it really does a decent job. Being in the thick of shooting up all kinds of messy, angry baddies is the core of Battle Planet, and having a friend along for the ride definitely makes it both more fun and have better longevity. You have random weapon powerups that’ll drop, from things like shotguns to electo zappers (think chain lightning in a gun), but you gotta use them as soon as you pick them up, no reserving weapons until later, so get good at not holding onto ideas for too long. With a second player on the screen, it’s a much more satisfying experience to both draw fire, balance out attack patterns and, in regards to bomb defusal, it’s significantly easier. The first two planets are pretty benign for dealing with baddies, but stage three is where corrosive beetles appear, making puddles of acid when they die, and it’s so much better to have someone to pick them off far outside the bomb’s proximity while you work on keeping everyone alive. Then again, on the other hand, the survival waves (survive sixty seconds of onslaught madness) felt more difficult with worrying about someone else diving into the lava or getting overrun by the massive Core Cutter bugs. In the same vein, some boss fights were easier (suck it, Spy) whereas others were more difficult.  Still, the chaos and spice of life madness were what made it worthwhile.

The upgrade system is…okay. It’s just okay. It gets really expensive to max out one of the upgrades, especially with how frugal the game is on dropping the “Chip” currency that makes up the upgrade pool. It took far too long for me to max out my health, but doing so really made the startup to a new run significantly easier, so it was worthwhile. It was sometimes frustrating to see that some pretty cool weapons would be available eventually (the gatling gun is such a game changer once you get it) but needing to hoard your chips until you found them, eventually. The random perks between levels were nice, but it never felt like there was much of a contest as to what you wanted to choose as an upgrade. The key to everything in this game (and, indeed, most twin stick shooters) is to get and stay on the offensive, and so you just always choose what makes your Raider Gun the most powerful. No matter which class you choose, as long as you’re beefed up to the 9s, you got this in the bag. Part of this is due to the overall nature of the twin stick shooter, but part of this, sadly, is due to the inherent design flaw of Battle Planet. 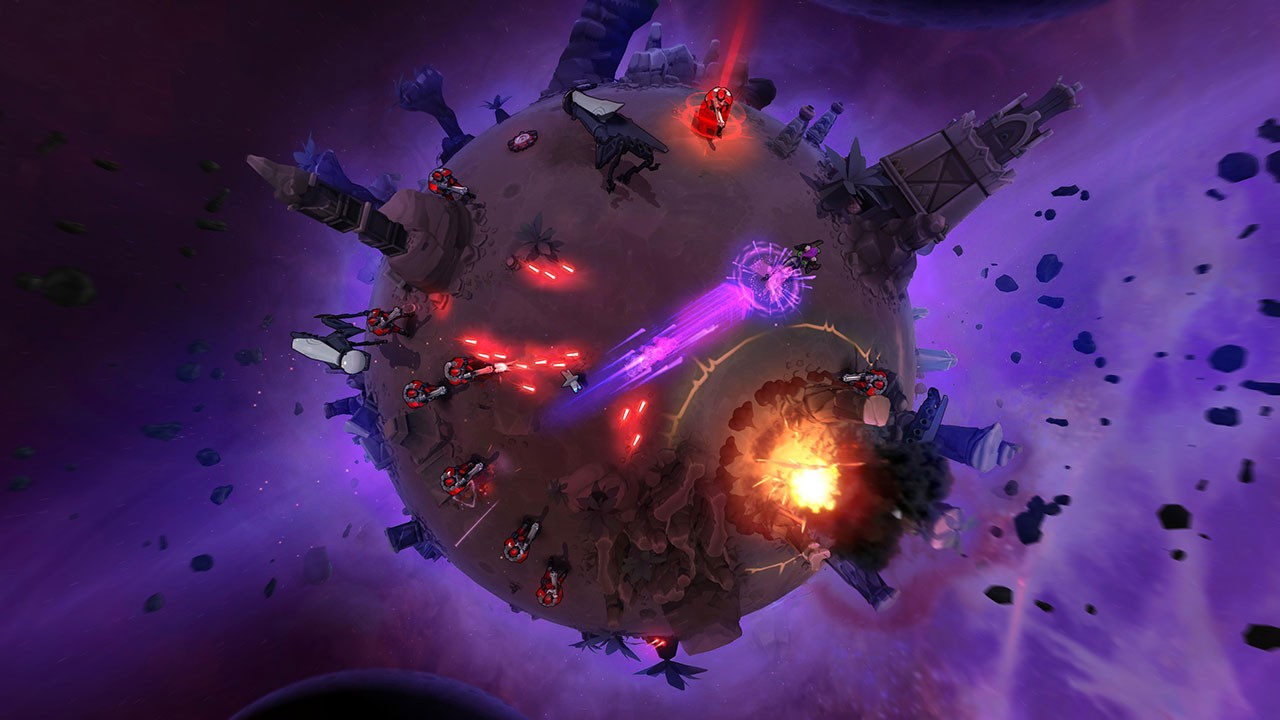 The concept of the game is that you’re an escaped convict, right? So you’re a bad guy, in some capacity, even if it was just intergalactic white collar crime. I dunno, you did a multi-planetary ponzi scheme or something. You’re not a good guy, you’re not Stitch, you’re not some kind of Prison Break style dude: you’re clearly a criminal. So why the HELL does Battle Planet make this game so easy for single players? The enemy density is strong, sure, but it takes a long time before it ever gets overwhelming in a sense of strategy. Until about halfway through the game, you can afford to lose one bomb per wave and still be fine, two if you’re feeling spicy. And who cares about dodging bullets? Enemies drop health kits like they’re the good house with full sized Snickers on Halloween. I’m not even exaggerating, I was a little worried about the second boss until he started spawning lackies, and then I relaxed. Because, no matter how many bullets the dude spat, as long as I wasn’t trying to actively collect them I was okay. Then every third grunt or so would drop a weapon or a health kit, and if number three dropped the shotgun, then number four would drop the green box of patchwork. The only way to die in Battle Planet is to be overly reckless, and even that can get you well into the game without a sweat being broken.

With some very gritty but appropriate graphics and an entirely forgettable “space but intense” style soundtrack, Battle Planet – Judgement Day doesn’t do a ton to stimulate the sense outside of gameplay, and I’m hard pressed to think what crowd it can rile up that isn’t already neck deep in something else. Twin stick shooters are everywhere, in every flavor, from Binding of Isaac to Tesla Vs. Lovecraft to Gungeon and beyond. And almost all of them are a reasonable price with well established, large scale histories of items, secrets and ideas. There’s nothing wrong with trying to break into the market, but you gotta have a hook that can also be balanced with other ideas. The rotating landscape is cool, and it can be fun, but it’s also forgettable the second I turn off the game. Even now I’m struggling to remember the name of the perks you get between rounds because it’s just generic titles like “Melee Monster” or something like that. Battle Planet is okay, and, if there was a sale, I’d say go for it if this is your sort of game. However, if you’ve never been a fan of twin stick shooters, this certainly isn’t going to change the tide.

While flashy in stills and decent in concept, Battle Planet fails to capture the attention of veteran players, and the generous nature of the AI does no favors.