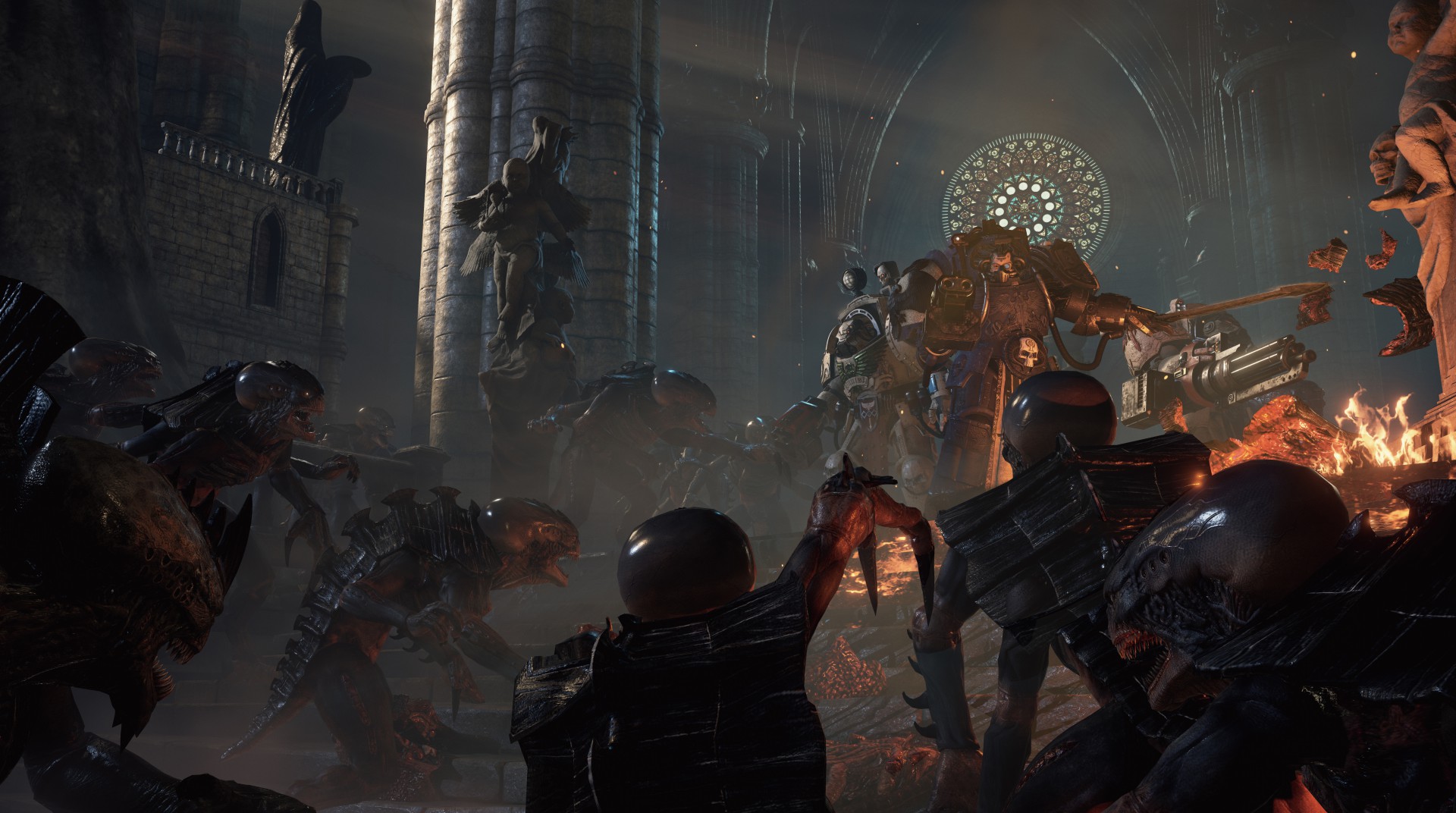 Space Hulk: Deathwing joins the ever-expanding list of licensed Games Workshop themed titles that has spawned since the popular board games manufacturer decided to allow external use of its IP. To be honest, it’s no surprise that developers are so keen to plunder the vast lore that the Warhammer universe has to offer, and in the case of Deathwing, the Space Hulk license comes with its own history as both a legendary board game, and as a video game adaption that has something of a cult following. Because of this history, Deathwing occupies something of a difficult position and has clearly been built to address the various requirements of each discrete section of the fan base. Thankfully, it mostly succeeds.

The game focusses on the Deathwing company of the Dark Angels space marine chapter, and, as always in Space Hulk games, the player takes on the role of a Space Marine Terminator. These huge, bio-mechanically engineered super soldiers are each clad in heavy armour and equipped with devastating ranged and close quarters weaponry. Their purpose is the extermination of all hostile alien life and the recovery of mankind’s ancient history, for the glory of The Emperor. As a Terminator leading two others, the player and his squad must traverse nine highly atmospheric levels whilst withstanding continuous onslaught from the Genestealer horde. These hideous, purple aliens would be terrifying to any normal human, but thankfully the Terminators are more than capable of cutting them down in droves, and whilst the game is challenging and exhilarating to begin with, it does become easier as you learn the nuances and gain access to more and more powerful weaponry.

The levels in Deathwing are huge, and for fans of the series and the lore, will act as the stars of the show. These foreboding, ruined hulks are created when ships collide in warp space and cluster together. From a gameplay perspective, they ooze personality, and range in structure from tightly packed corridors filled with burst pipes and dead bodies to vast, hallowed cathedrals resplendent with stained glass and gothic detail. All suit the games combat style, which favours the player wherever the aliens can be channelled to approach from a single direction, but magnifies the Genestealer threat wherever they are able to stream down walls, up ladders and through pipes leading from all directions. It becomes predictable, but in Deathwing you always know you’re in for a big fight whenever the objective marker hangs over a wide open space. 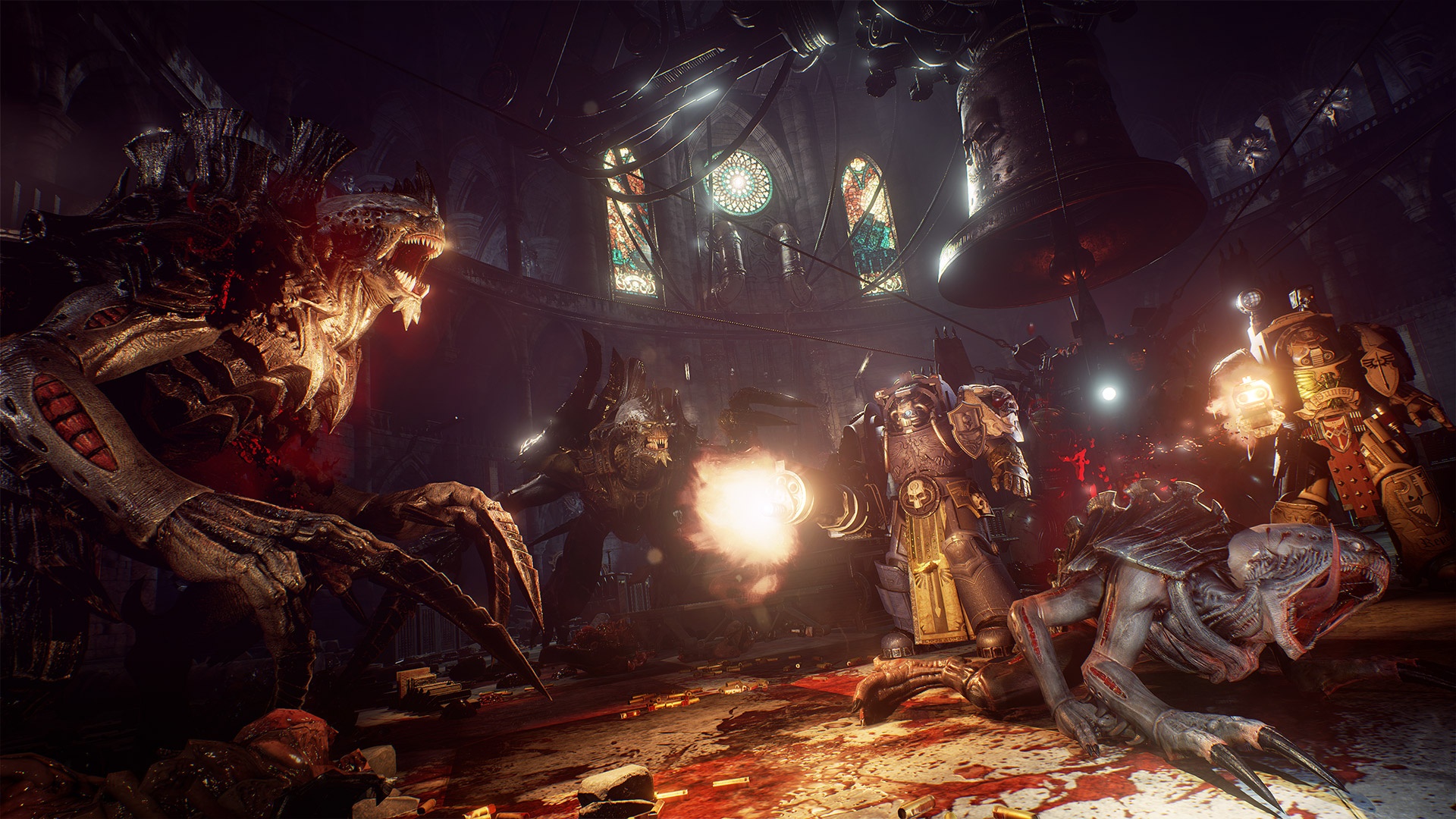 Despite the spectacular levels and impressive weaponry, playing Deathwing on your own can soon get boring. Designed in the Left4Dead or Vermintide mould, Deathwing tasks the Terminator squad with traversing each Space Hulk in order to unlock the various mysteries held within. There is a central storyline that continues between levels and drives the overall plot, but on a level by level basis, objectives mostly involve walking to the furthest point of the map (from wherever the previous objective was) and pressing a button, switching a switch, or killing a key bad guy. Despite the relatively interesting levels, this kind of basic, uninspiring objective structure does little to enhance the gameplay, especially for the solo player.

The two Terminators that accompany the player can be customised with alternative weapons based on a skill tree that the player can invest in between missions, but there is nothing revolutionary here. The best combination I’ve found is probably the basic one, which arms one comrade with a healing syringe and a bolter, and the other with an Assault Cannon, AKA, a Minigun. Loadouts can be switched three or four times per mission through the use of a psygate, that conveniently teleports the squad back to base. This lessens the challenge of the game considerably, because dead Terminators are revived and the number of the charges in the healing syringe is refreshed. I should also mention that one of the more interesting things that players can put points into between missions is psychic powers, which come with a range of impressive pyrotechnics, although some are not as powerful as the visual effects would suggest.

Clearly then, multiplayer is where it’s at, and here the standard of Deathwing’s gameplay rises, but it rarely, if ever soars. Players work in teams of four here (rather than the team of three in single player) and must complete the same kind of objectives as in single player. The challenge level is dialled up for multiplayer, but only to the extent that the number of enemies that appear (and the amount of tougher variants) is increased, rather than in any other innovative way. Multiplayer felt to me as if it were kind of like the Horde mode in Gears of War, with the added benefit (for lack of a better word) that Deathwing does force players to press on towards an objective, and doesn’t allow for camping. In keeping with the Space Hulk tradition, there is no end to the amount of enemies that will spawn and swarm towards the Terminator squad until they are all dead, but swarm is basically all they will do. Some will take alternate paths if available, and others have powers like partial invisibility, but for the most part they just charge straight forwards. And I’m OK with that. That is Space Hulk. 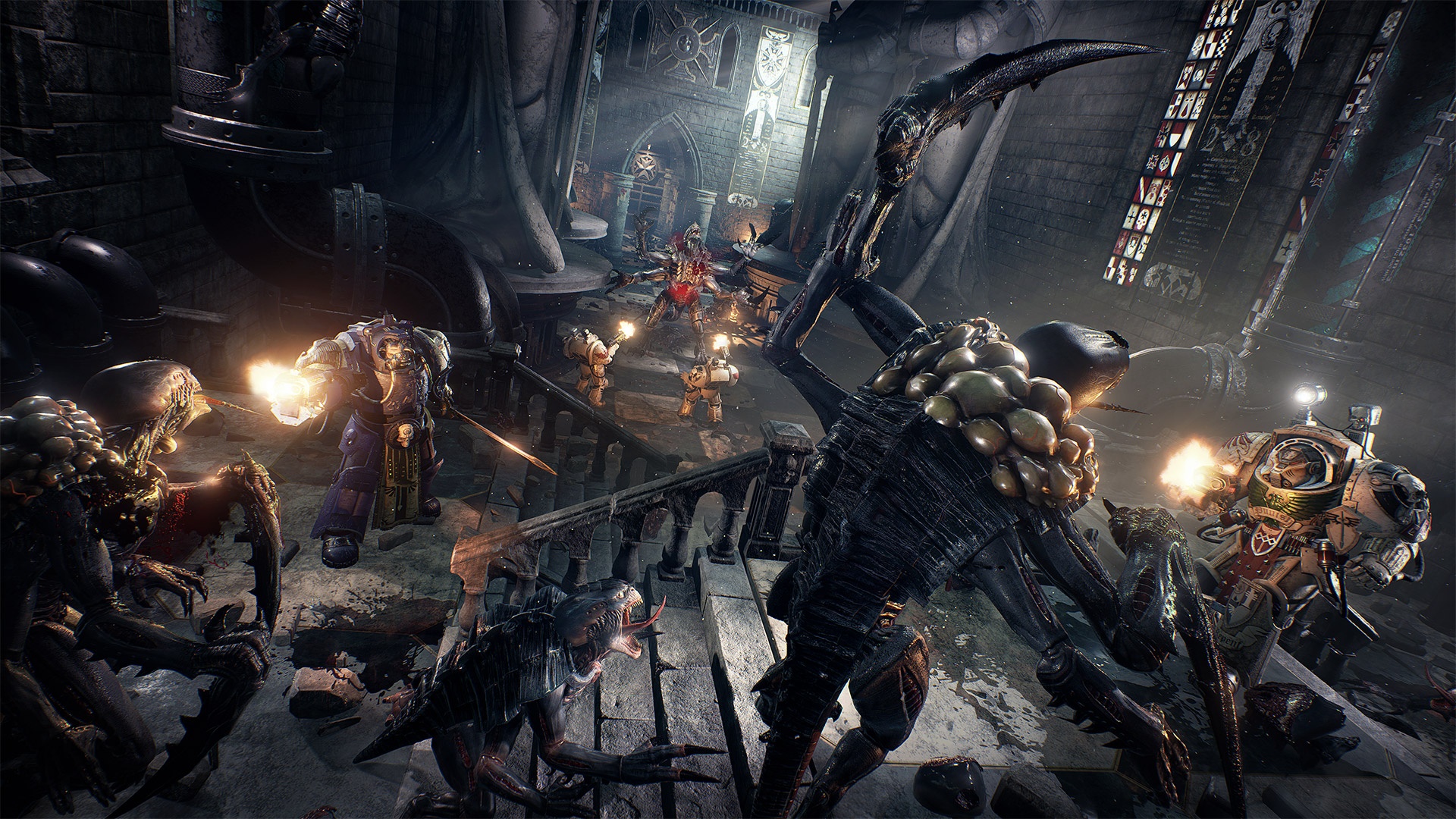 One thing that Deathwing lacks is the ability to present dynamic and interesting challenges. When I described it as similar to the Horde mode in Gears of War, what I meant is that it’s core gameplay is very akin to a survival mode in any other sense. Enemies simply keep coming, but their behaviour never really changes and their isn’t any possibility for the unexpected to happen, such as it does in games like Left4Dead, with its fantastic AI Director. This brings me back to the fact that the Space Hulk itself is the real point of interest here, and of course the Terminators and Genestealers that occupy them. In a roundabout way, this combined lore is incredibly powerful and very well handled, but it isn’t put to the very best use at a gameplay level.

And so in conclusion, I can safely say that Deathwing does a lot of Warhammer 40k stuff really well, and it feels quite good to play. The Terminators feel sluggish and heavy on the run, but they turn quickly and when they open fire; Lord have mercy! Do they open fire or what? The joy of cutting down hundreds of hideous aliens in wave after wave is tremendous fun for a while, but by the third or fourth mission you’ll be seeing the cracks appearing in repetitive gameplay and dull objectives. Add some pals into the mix and no doubt, things get a little more interesting, but you can only play the same missions three or four times (especially considering how similar they are) before you’ll be bored to tears. The game lacks competitive multiplayer, and there is no variety in alternative game modes to be found, so unless you really love the game, you’re unlikely to find a long-term interest here.

With all that said, fans of Warhammer 40k will certainly be interested in Deathwing, and rightly so. If I hadn’t been given it to review, I would almost certainly have bought it, even despite the mediocre reviews that I think it will probably draw. It looks fantastic and it oozes lore and authenticity, especially perspective of a fan (such as I) that loves both the original board game and the very first Space Hulk videogame, dating back to the late nineties. Deathwing doesn’t stack up to the standards of peers such as Left4Dead or Gears of War, for example, but it does stand out as a really good example of how the Warhammer 40k universe can be sympathetically converted into a decent first person shooter.