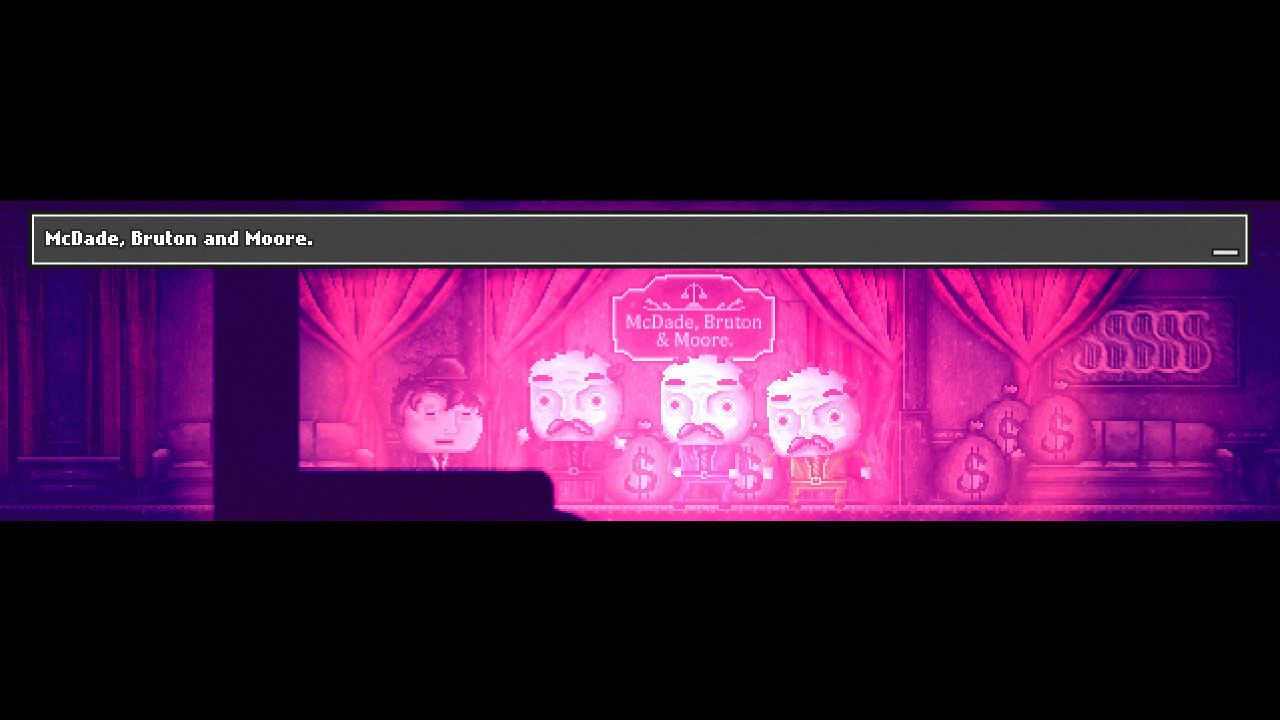 What is the price of success? Each and everyone of us must make decisions as we grow and mature, and every step is along a path that ultimately leads to our own future being shaped in one form or another. We sometimes close the door on one opportunity in order to follow the opening that leads, hopefully, to where we want to be and what we want to have as we march forward with the relentless pace of time. Yet we must stop and wonder, is there anything we wouldn’t do? Sure, it’s easy to say things like “I’d do anything” when we are destitute or simply unhappy with our stations, but, at what point are we sacrificing something irreversible in order to get ahead? What about our own conscience, our morality, our very humanity? Is it worth making the present easier or more comfortable if we might be giving up our very soul in the process? Jesse Makkonen, a one person game developer, posited this very question just a few years ago, and now, with help from Ratalaika Games, gives Switch owners a chance to be haunted by this same idea, with the release of DISTRAINT: Deluxe Edition.

Price is an up-and-coming new recruit at the company, and he wants, desperately, to climb the ladder and make things different and better for himself. After all, his apartment is junk, he wants the finer things in life, and money does make the world go ‘round. Still, Price didn’t feel good about needing to inform the kindly Miss Goodwin that she had missed too many payments, and was about to be kicked out of her apartment. Still, that was his job, right? Someone needs to do the dirty work, and, for the potential salary, Price was willing to let it be him. Still, the decision clearly wasn’t the right one (at least in a humanitarian sense), and things began to feel…bad. It only took a short time before the world around Price began to change and shift, and, soon, Price is pulled into an undercurrent of horror and madness, leaving him to beg the question: was it worth it? Are my decisions earning me the price I want to pay…or have I gone too far? 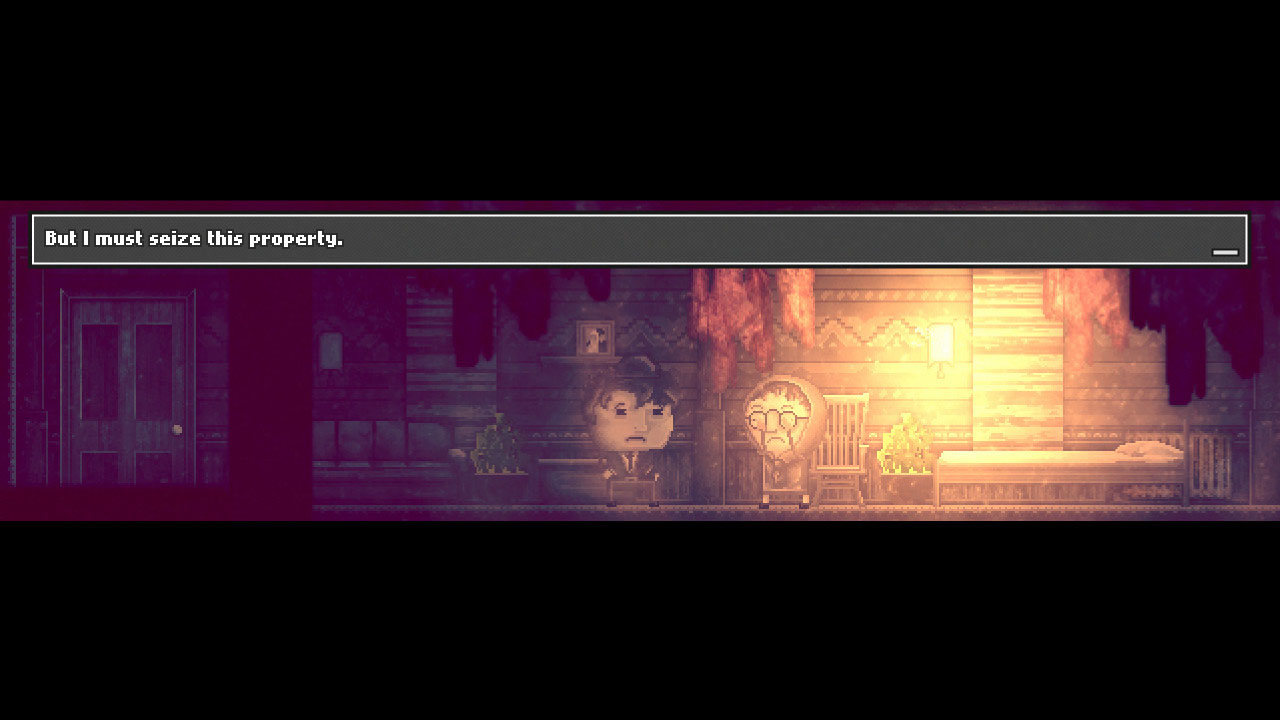 DISTRAINT: Deluxe Edition plays as a side scrolling, atmospheric horror game in 2D, with a fair amount of puzzling sprinkled in for the purpose of moving the story forward. In theory, the entire point is for Price to look into getting distraint (or forcibly seizing someone’s property) on three targets in order to finally make his place known within the firm. Along the way, Price begins to suffer a series of hallucinations that may or may not be real, with some of them prophetic, and he needs to act accordingly, You can find items that are almost immediately used in different scenarios in order to advance the story, with a max of three items being held at once (and three being the most number you ever need to worry about). As the game is more psychological in nature than horrific, there are certain moments of “danger,” but not anything that you really have to worry about. A good example is, at the beginning of the game, Price ends up needing to run from a massive, corpse-like elephant that begins chasing him. If you actively decide not to run away (or run towards it), the screen abruptly goes black, and Price pulls a Prince of Persia: Sands of Time and says “No, wait, that’s not what happened” and makes you do the scenario again. So, if you’re worried about succumbing to jump scare zombies or things like that, you don’t need to worry.

On the other hand, if you’re looking for DISTRAINT to really make you jump out of your skin, you might also be disappointed. While the game does take advantage of light and darkness to suddenly unveil things upon you abruptly, there were very few times that I got genuinely “scared” or something to that effect. Instead, the tone, throughout DISTRAINT, would be “creeped out.” There are plenty of moments of things suddenly moving off and on camera, like when a door begins to bleed blood, or when an animal corpse looks, momentarily, like a dead Miss Goodwin. It’s got a good tone to it, further backed up with a lot of ambient, dissonant sound that’s meant to keep you on edge and really feeling unnerved by a lot that’s happening in front of you. Price is constantly trying to battle the dual reality of why he needs to do what he’s doing and why he feels so ill and unhappy, and downright disturbed, by what his bosses are asking him to do. It doesn’t help that he’s constantly visited by the dual spirits of his parents (who ask him to try and retain his humanity) and the trio of his bosses (who applaud his tenacity in kicking out those in debt and also view him as just a meat puppet). The whole thing creates an ambience of upsetting, and it works wonderfully during the storytelling aspect.

Additionally, DISTRAINT does keep things balanced with both a bit of gameplay and some sufficiently dark humor. The character sprites, being big headed and cartoony, add this air of disbelief to the whole thing, allowing for a bit of removal from what would otherwise be truly horrifying. By making sure everyone appears more absurdist, it keeps moments of truly gruesome actions from being damaging and scarring and, instead, almost makes them the cutting edge of black comedy. Additionally, breaking up the game with some errant puzzles helps to keep the player engaged and also elongates the time you spend within the DISTRAINT universe. The puzzles never take very long and can often be worked out with simple logic, such as “I need item X to activate event Y.” The longest time, I would say, was my first puzzle when I forgot to put the ice cube as my active item and just kept talking to the stove and couldn’t figure out what was going wrong. Everything else presents itself wonderfully: a man complaining about meat will be satisfied with a hunk of “beef,” without questioning its origin. The gasoline you find is most certainly meant to power the generator you find in the basement, which leads to the item you need for the next leg of things. It’s dead simple, but it serves the purpose of having the game be more interactive than just watching a static, tragic tale unfold before you. 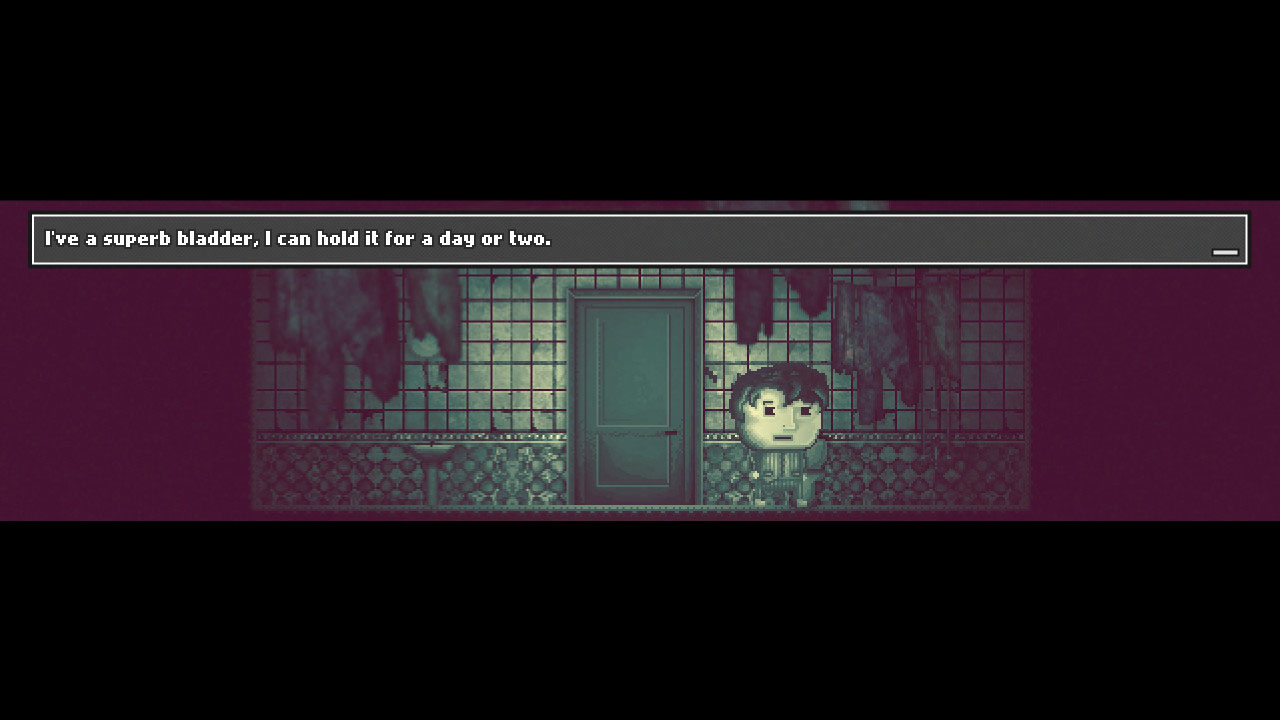 Players who are looking to pick up DISTRAINT should be very aware of three things. Firstly, the “Deluxe Edition” moniker. This is, effectively, a fresh coat of paint and some important tweaks to make the game better for fans who enjoyed the original edition but found some wonkiness with lighting and interaction. This doesn’t mean there are secret endings, additional content or bonus gameplay other than a severe improvement over the first iteration (feel free to find screenshots and video to compare, it’s vastly better). Secondly, the game is relatively short, and the two hour runtime that the developer gives is incredibly generous. If you are thorough and inspect every single room and item, you’ll get there, but, otherwise, you’ll more than likely clock in at an hour, very easily less. Granted, the game is fairly inexpensive, so, for this level of storytelling and design, I can accept and even respect that. But, third, there is no achievement system, which is a damn shame. There are some funny achievements that were baked into the Steam release, and, as a result, the exploration aspect of the game has really been neutered. Doing strange things like offering the dog gasoline hold no weight other than a couple of lines of additional dialogue, and, once the game is over, that’s it. You’ve seen Price’s fate, and you can take it or leave it.

The story and the journey within DISTRAINT is not a pleasant or happy one, but it is memorable and, ghoulishly, enjoyable. The game handles perfectly fine on the Switch, has a minimal install size, and should not be played by anyone under a certain age, lest they run the very real chance of bizarre nightmares and exposure to upsetting scenes. As an adult, the awful nature of what unfolds before me was tempered with sick humor and my own fascination with what was unfolding, but it cannot and should not be inflicted on a child. My firm resilience to play the game in handheld mode is probably why I finished it so fast, as I wasn’t gonna let my kids see the grainy, haunting imagery throughout. Know what you’re getting into, both in terms of time and tone, and you can judge for yourself whether Price made the right decisions or descended into a hell of his own making. It’s certainly worth the time.

What if Devil’s Advocate was a 2D horror game?