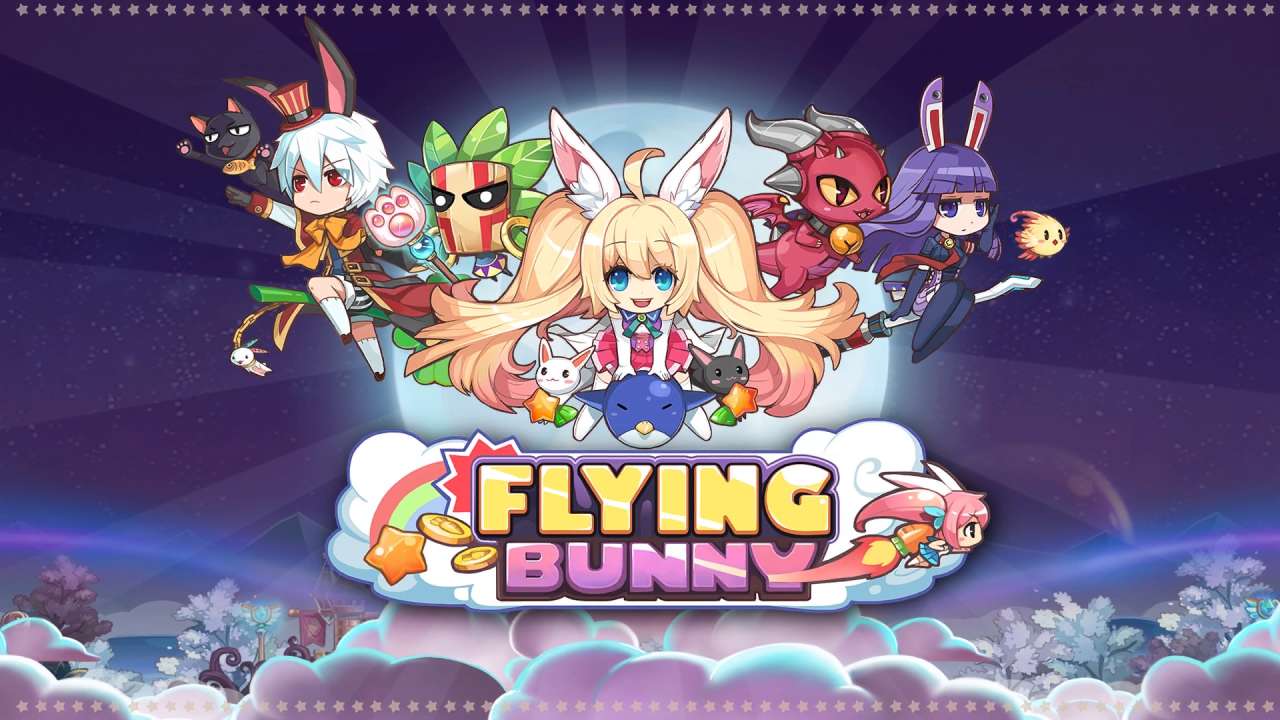 On face value ‘Flying Bunny’ looks like it can be a lot of fun. As far as cutesy shoot ‘em ups go it really is beautifully presented. Everything is drawn in a Japanese style with broad strokes, solid colours, and a versatile range of wacky characters. It really is the type of game that just pops on the screen and is very appealing to watch. Add to that some catchy poppy music and you have all the assets you need for a fantastic arcade classic. Unfortunately once you pick up the control and give it a go for yourself the disappointment quickly sets in.

Flying Bunny is a horizontal scrolling shooter that loops continuously. Each stage is split into two acts followed by a boss fight. So far, so good. However the problem I have with this game is rooted in the controls. Rather than creating a traditional arcade shooter where the player has complete control of the movement, Flying Bunny has aimed for a more mobile / tablet friendly control scheme similar to that found in Flappy Bird.

The entire game is controlled using just two face buttons. One controls elevation and generates an upward thrust when held down, as a result the only way to maintain a steady altitude is to rhythmically tap this button continuously. The second button is used to launch a special attack and is only used occasionally (I tend to only use it during the boss fights). These special attacks require a period of time to recharge after use so you cannot spam them constantly.

To my knowledge, Flying Bunny hasn’t been released on the mobile market, at least not under the name ‘Flying Bunny’. Maybe it was released on mobiles in Japan but I couldn’t find any information on it. Despite this, it seems that making a touch screen game was probably the original intention. As a mobile game this would certainly kill a little time on a train, but as a console game I was really unimpressed.

For a game with such basic controls there are some interesting design choices. Your character fires their shot automatically which eliminates the need for a separate fire button, and can only fire once they have collected enough pickups to fuel their weapon. This means during each stage there will be a period of avoiding enemies before you are given the opportunity to attack them back. Weapons are fueled by sweet foods (cakes, donuts, lollys etc.) which litter the screen along with letters that can be collected to enter bonus rounds and a few other powers ups such as bonus health or the ability to grow in size. 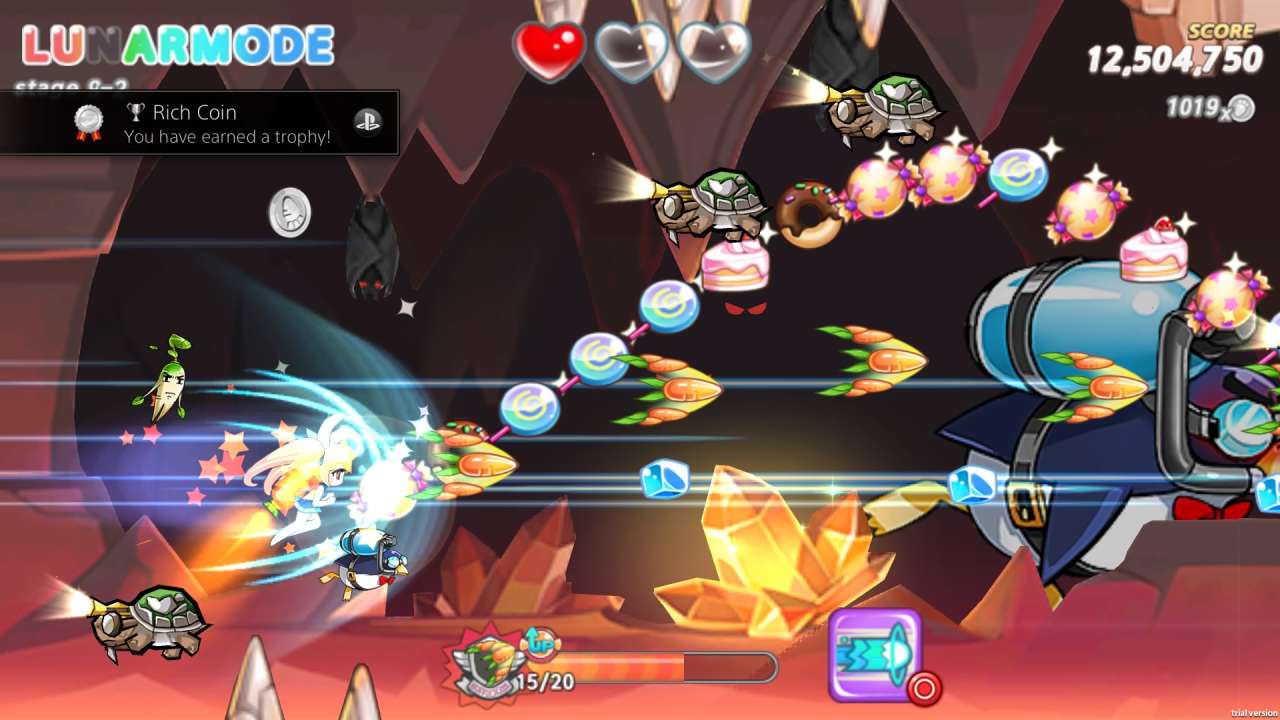 Although very repetitious, there are some progressive elements to strive for such as unlockable characters and various assistant characters, which are rewards for achieving certain scores and mile stones. There are many wild-looking characters that all have different statistics and attributes such as their rate of fire, strength of shot and starting health. As such, it’s worth experimenting with the characters you unlock as you may find one that gives you a bit more of an edge. Whenever you start a run you are given a choice of assistants (which usually take the form of pets) that fly alongside you and have various abilities. The two pools of assistants are labeled ‘passive’ and ‘active’ with the active pets having their own weapons that they fire alongside you.

The enemies are a mixture of different turtles (possible a bit of Super Mario influence) that just seem to just hover around with no discernible AI to speak of. They just seem to get in your way more than they act as any sort of threat. The bosses offer a little more variety as some actually have noteworthy attack patterns, but they are nothing exciting or special. There is a nice touch in how the bosses will linger around the background as a kind of warning that the boss fight is about to start.

In total there is only one game mode available. Although you can play as different characters with some different ability options, there is very little variety, no multiplayer and no online functionality outside of leader boards. As far as I could tell it is stable as I encountered no bugs, glitches or crashes in the time I spent playing it.

Flying Bunny is decent as far as being a light, casual game is concerned. However in the grand scheme of things there is very little substance here and I think anyone who buys it will struggle to get their money’s worth. I personally got bored very quickly and am glad that I didn’t spend my own money on it. It really is a shame as it does look very nice, but these assets really could have been put to better use. If you like games that are not too complicated to pick up and play then it may be worth checking out, but I reckon most gamers are better off looking elsewhere.