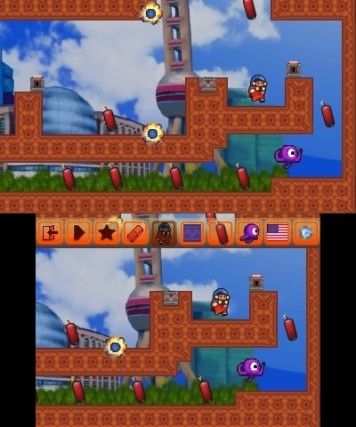 Johnny Dynamite is another 3DS platform with the kind of gameplay you would expect from typical mobile platformers. However, Johnny Dynamite expands on this formula with unique features and added challenges, creating a more unique and fun experience. Its faults are small in numbers and much of what it does is better than other platformers it may be competing with. That being said, I will start with the visual and auditory aspects of the game.

Visually, this game could best be described as “fine.” There is nothing overtly spectacular about the graphics. The main character design is somewhat bland. Enemies have plenty of differences between their designs, yet they all have a similar flavor to them. However, none of this detracts from the game in any way. Similarly, the colorful backgrounds of each stage are often difficult to notice and appreciate during the fast pace of each level, but they add a nice touch nonetheless.

Perhaps my biggest complaint about Johnny Dynamite is its music and sound effects. While the upbeat music tends to match the fast pace of gameplay, the arrangement leaves much to be desired and becomes a pain to listen to fairly quickly. Interestingly, the game provides the option to play with the music off while still playing all of the various sound effects. However, most sound effects are equally as annoying and fail to add much to the gameplay. As no auditory cues are important in the progression of the game, I would recommend playing it with your 3DS’ sound turn off. All that being said, the other features of Johnny Dynamite make these few aesthetic errors well worth overlooking. 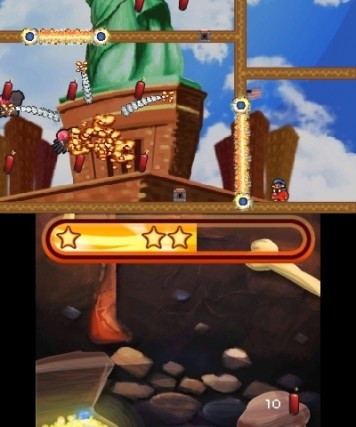 On the surface, Johnny Dynamite’s gameplay is simple and fairly self-explanatory. The objective is to collect every stick of dynamite, jetting through the air to do so, completing each level upon collecting all of the dynamite. The player character has an unlimited supply of dynamite to throw for the purpose of blowing up enemies and occasionally solving puzzles (more on that later). While most levels come with their own set of enemies to fend off, defeating all the enemies is never a requirement for beating a level as long as the player can collect all of the dynamite without killing the enemies. The player also plays with a time limit, encouraging quick thought and action, with the player scoring between one and three stars based off of their speed. The bottom screen conveniently tells the player how fast they will need to complete the level to earn whichever amount of stars.

As the player progresses through the game, they are met with new challenges, encouraging new strategies with each coming level. The player may have to alter their timing in order to avoid electric lasers which work on a timer. They may have to throw dynamite at otherwise inaccessible buttons in order to deactivate otherwise indefinitely active electric lasers. They will have to position themselves properly in order to kill defensive enemies without getting hit themselves (as any hit from an enemy or hazard is instant death). They will have to activate their jet thrusters at just the right time as to collect all the dynamite without falling into a pit of spikes. In short, this game adds a lot onto its surface level game mechanics, and comes with 54 fun-packed levels for the player to enjoy. 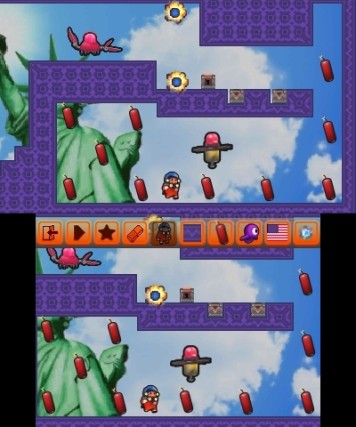 One of my favorite features of this game convenience-wise is its lack of tutorials. Rather than telling the player how to play, the game either shows them or allows them to figure it out for themselves. Because of its control scheme being limited to moving and activating jet thrusters, Johnny Dynamite simply passively shows the necessary controls on the top screen as the player is beginning the game. The game never explicitly tells the player their objective, but instead puts them in a fairly easy starter level and allows them to determine the goal themselves. In fact, players are faced with these easier, tutorial-esque levels every time a new game mechanic is introduced, allowing players to learn the ins-and-outs of the game without their hand being held by the game throughout the experience.

One final feature that needs recognition is Johnny Dynamite’s level creator. All level designs are solid, yet simply, and as a result, players are given the option to create levels themselves. Johnny Dynamite comes with slots for twenty-four player created levels, allowing for players to create and share enough levels for their own mini-adventure. Selecting enemies and obstacles, as well as placing dynamite sticks is easy to do, allowing players to express their creativity in fun ways. These levels can then be shared via QR codes, adding a social aspect to the game as players share their own personally created stages.

All in all, Johnny Dynamite lacks serious flaws and comes with a whole lot of features which make it stand out among other games of its genre. The main campaign makes for a great game to pick up and play on the go, and the level creator is equally as good for players who are able to sit down and fine tune whatever kind of level they desire to make. Johnny Dynamite is a great title for anyone looking for a twist on the typical platformer formula.