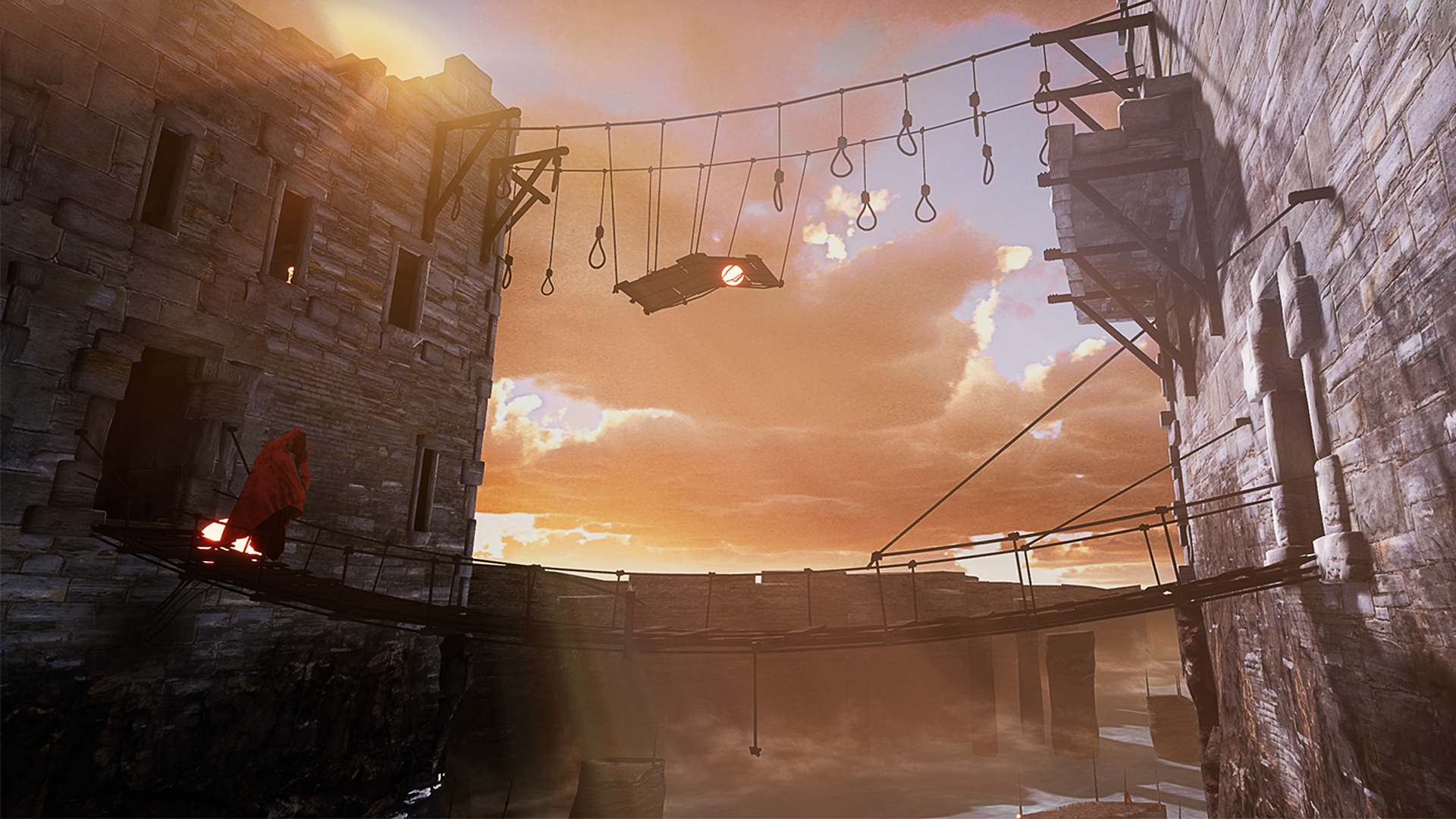 Alternative art is some of my favorite stuff on the Internet. By now, most people have seen these awesome ukiyo-e paintings of classic video game properties, and a cursory search of “video game alt art” gives us everything bizarre and intriguing that you could imagine. It’s great to take a classic idea and re-imagine it, as long as you have an original take on it. It’s like a cover song: when you do a straight cover, you might not even make waves, but sometimes you come up with a whole new perspective on a message. Still, it’s important to have substance with your idea, otherwise you just get a whole lot of posturing without a ton of execution.

Infernium is a pretty interesting concept, that much is abjectly clear from the word go. The developer, who did a pretty solid thing and advised against buying their game till the price was fixed, has presented it as a first person survival horror variation of Pacman. Indeed, I can see the similarities: there’s what feels like neverending mazes, glowing orbs of unknown power, and ghosts that want to murder you. As for story, you start off as a dude, with no real explanation, standing on a lonely hilltop somewhere in the ocean. You have a single glowing finger: this is your Harvesting Finger, and you need to get a whole hand’s worth to get to your goal. You’re neck deep in symbolism and poetry, as you try and make your way through about 17 levels of earth, sky and darkness, all in a quest for personal salvation and revelation. Along the way, you’ll encounter a number of things. Doors that could lead elsewhere. Limited energy to give you access. Optional and essential items to make the quest more successful. Spirits and beings bent on your damnation. And tons of choices, each with a single opportunity to decide, sometimes with disastrous effects. There are many ways you could finish the game, and many that could make it so you cannot. The question remains: how will you carve your path out of Hell?

Sadly, Infernium’s bad points must be addressed before the good. On the Switch, the game simply does not look that great. Don’t get me wrong, some of the landscapes are pretty damn spiffy, but your character, as a pair of disembodied hands, is pretty lackluster and honestly ugly in the grand scheme of things. The enemies you encounter are scary, sure, but that’s mostly in part to the soundtrack deciding to pull a Hitchcock everytime the beings start to chase you. I say beings because I think they’re supposed to represent the ghosts of Pacman, but they either look like floating towels or weird wire figures. And the darkness is simply too dark: there are moments when you can pause the game and mess around with the picture for the ultimate screenshot, but, when you unpause, it drops right back to default settings. And the first and second worlds especially, where you’re trying to get your bearings, have a lot of cavernous rooms that are near impossible to navigate without just slamming into walls. Bonus, some of those walls aren’t there and you fall to your death, which is something that happens almost as much as the death by throw rug. Ironically, if you can make it through (in my opinion) the darkest areas of the game, you’ll soon find a Flashlight skill that makes everything significantly easier (and actually is quite necessary to live). 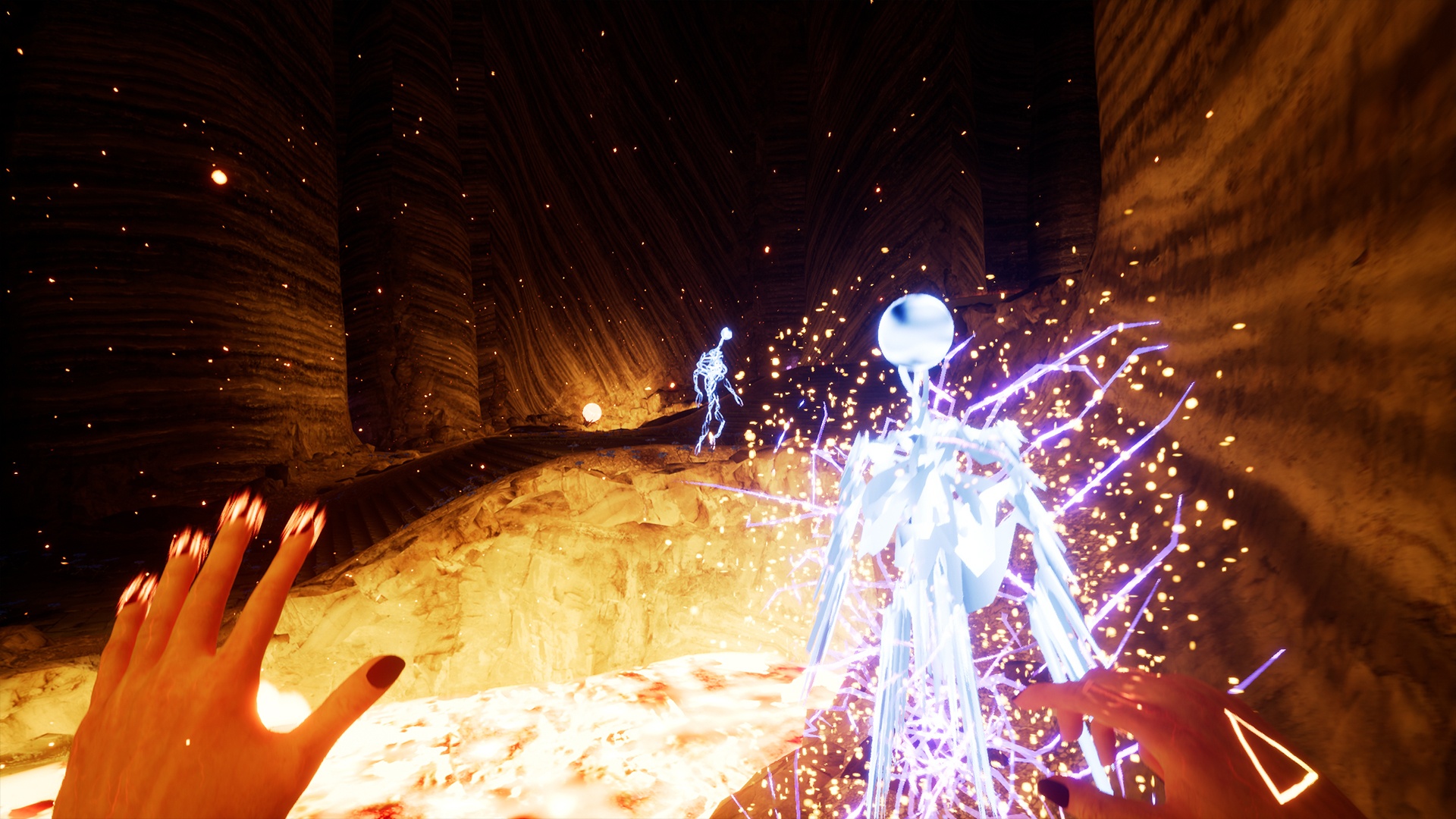 Additionally, the game’s chief mechanic is this teleportation dash idea that is well explained at the beginning…by a sign behind you. Most players will naturally walk forward, at which point they’ll encounter a bridge with a hole in it, a sign that tells them “teleport here!” and only vaguely be certain as to what to do. I definitely died twice before I hazarded a guess that there might be more elsewhere, and behold, there were clear instructions! Once you get it, you got it, but not getting it at first feels like the weirdest choice. Like…why wouldn’t the better sign be closer to the bridge? I mean, the teleport isn’t the most important thing in the game, but it’s a serious and crucial technique that’s the only way to access some places, including most of the level transitions. Plus, you’ll eventually figure out a different take on the teleportation that brings about a lot of change to the game.

Now, once you get going with Infernium, there’s a lot to take in, and this is where it gets interesting. Infernium takes its nonlinear gameplay seriously, and the choices that you make will ultimately affect how long you play and how the game unfolds. As you go around, you can “harvest” energy to recharge your magic, and this energy is used to unlock doors, activate respawn points and do almost everything necessary to move forward. The energy is limited, though, and this game is “soulslike” in presentation: that is, once you make a choice, that’s it. If you suck up some energy along the way you didn’t really need, it’s gone, and it won’t come back unless you totally reset the game. If you make decisions without thinking, you shut yourself off from some places until much later. You might end up putting yourself in a situation where you have to deal with more enemies, under worse circumstances, and you have no one to blame but yourself.

And the whole concept is genuinely interesting and intriguing. I loved how the different worlds unfolded, how things were connected and looped back onto themselves, how there was this theme of digging deeper in order to get to where you wanted to go. A tantalizing but isolated spot you see at the very beginning of the game isn’t accessible until a few hours in, and even then you have the choice to doubleback and explore or to just move on and forget about it. The fact that every single enemy is a single hit kill is really stressful, and not just because you kind of move a lot slower than I would have liked to. After being initially annoyed at my walking speed, I grew to appreciate and understand it because it’s how something disembodied might move, and I became attached to my own personality, my identity in the game. There are words and ideas scrawled in some places, and I’m still not sure if they’re related to my character or just arbitrary madness. Finally reaching the peaceful beach seen in the trailer is a great relief…until you figure out that this isn’t the end: it’s just a place to rest for a moment. 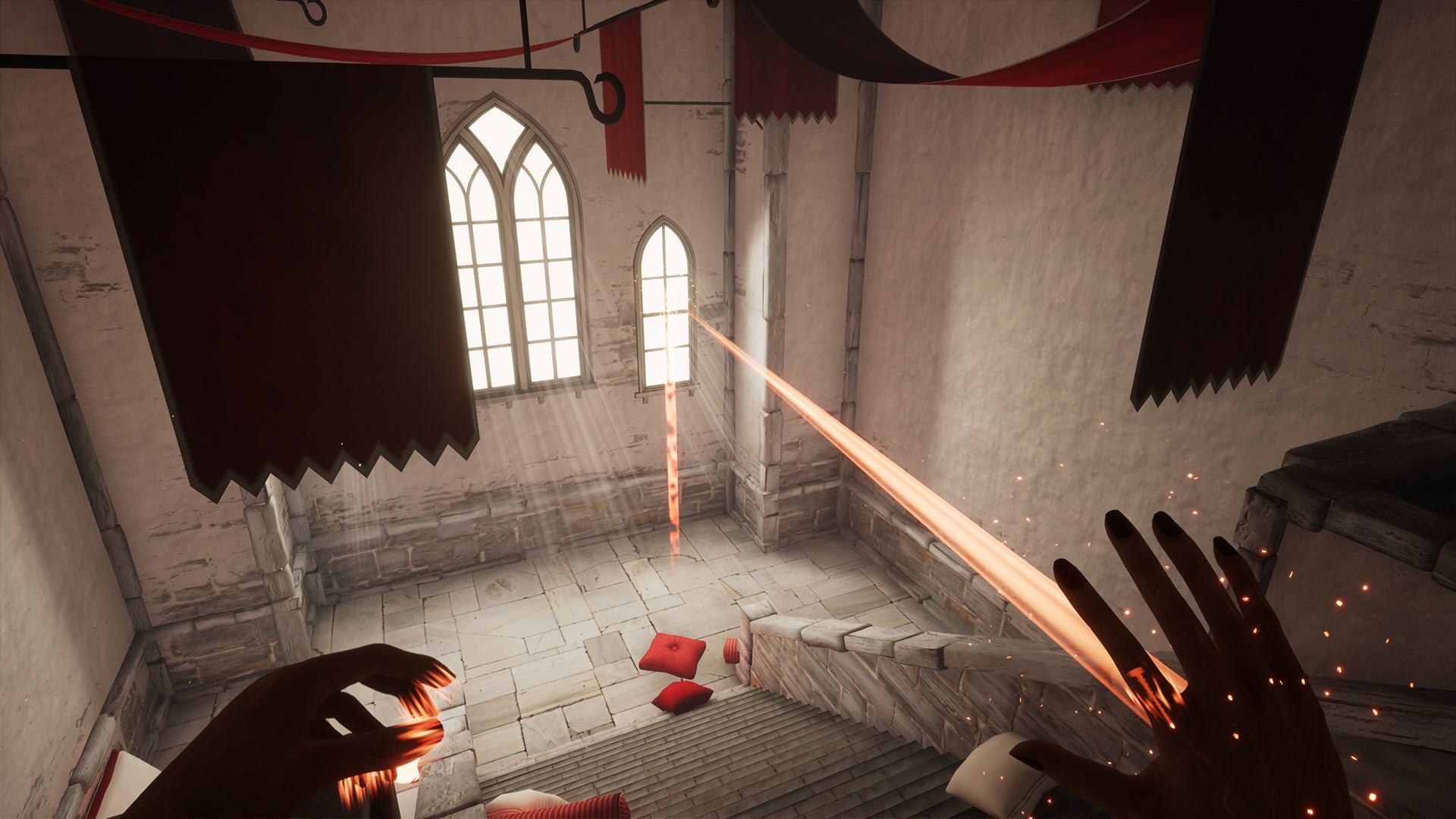 Infernium does deliver a lot, but it’s tempered by certain limitations. There are multiple endings, but it’s impossible to work towards another until you finish one, because you simply won’t know/can’t know what to do otherwise. The first playthrough is a long one, due in part to the exploration and surprise deaths that will occur constantly (though an item that you find really helps with this), but subsequent revisits are actually quite fast, cutting the time down to less than half. The developer has stated that he wants it to be speedrunner friendly, and I think that it works in theory, given that knowing certain unlocks and using the dash correctly could shave a lot of time off. Then again, does it cheapen the deeper theological endings and suggestions if we’re just trying to get through it as fast as possible? That is a question the player must ask for themselves.

There is something that I like about Infernium. It rankled against me the first time I played it, but it slowly wore me down through death, frustration, success and satisfaction. I think there’s plenty to be gained from giving this a try, even though I do think it could be a bit more polished. But, between the genuinely cool take on Pacman, the good jump scares, the interesting execution and the overall package, Infernium delivers what it promises: something unique and memorable, and not in a bad way. Indie fans take notice: you gotta slog through Hell before you get to Heaven.