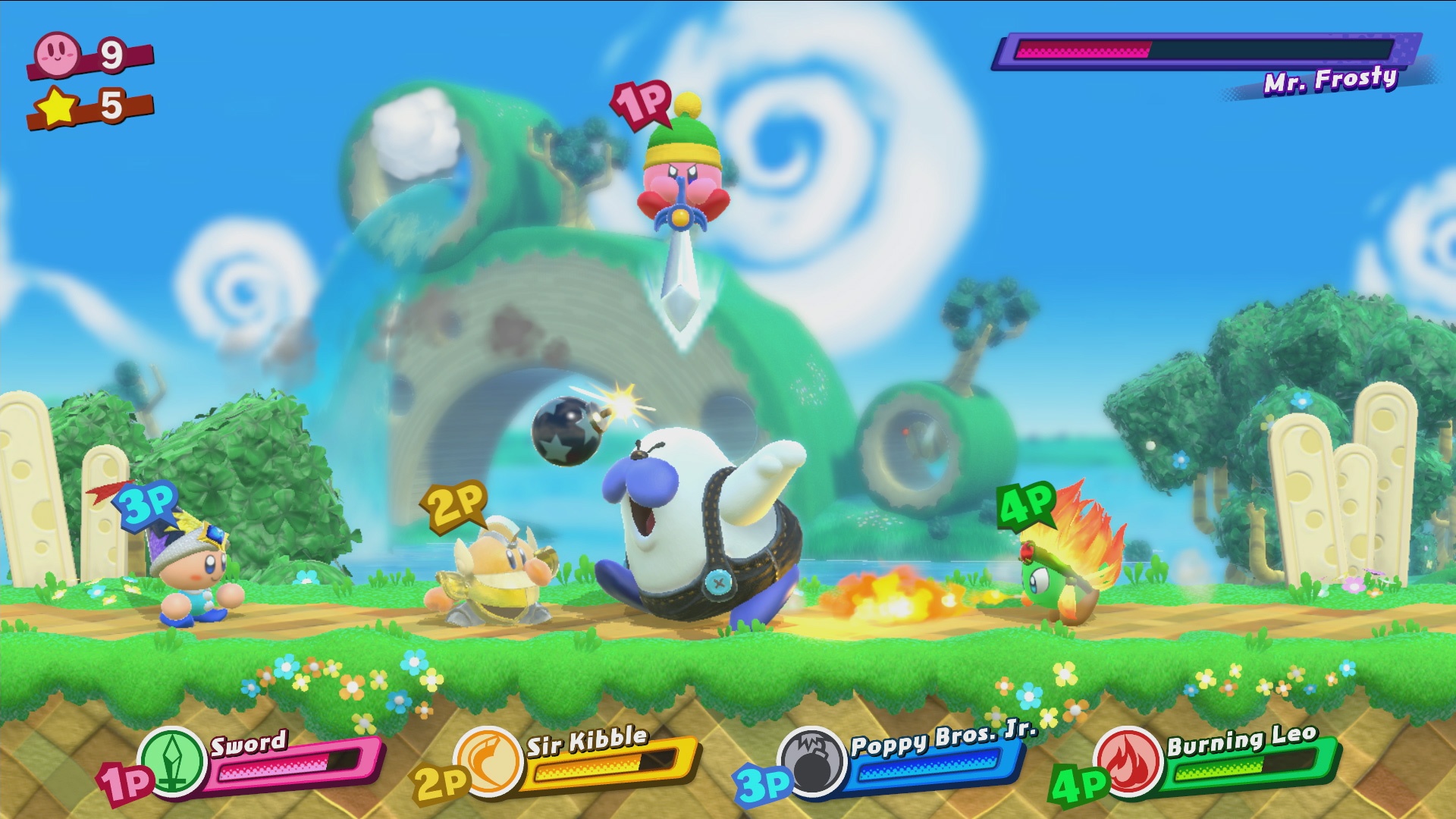 It can sometimes be daunting when you move between schools. Anyone who used to be a top dog in Junior High School and then went into a much, much bigger High School can understand this mentality. Sometimes it comes from an undeserving place, such as your family had money and no one cares here, but sometimes it’s genuine shock from a genuine shift. It’s hard to have things come easily to you in mathematics when the largest concept you grapple with is imaginary numbers, and then suddenly it’s all tangents and cosines and you don’t know what the hell happened. Now you’re pulling Cs instead of As, your mom thinks you’re lazy, your sister thinks it’s hilarious and you just want to go back to getting praised for being good. So you try harder, and work harder, and you still…pull a B. Is it your fault? Probably not, but no one’s going to listen to you if they remember when you brought home 100% completions. But the Switch is definitely the harder high school, and it was easier to reinvent yourself if you came in without a reputation. Some indie games have delivered on the hype, some have far succeeded since they were unknown. Unfortunately, for one pink legacy character, the Switch is definitely a tough place to achieve the same level of success as before. So, please don’t hate me when I say that I wasn’t totally blown away by Kirby Star Allies.

Right out the gate, Kirby Star Allies does a lot that the previous games have not. Firstly, the plot line is actually pretty interesting and clever. Some kind of dark force has invaded the hearts and minds of the creatures on Kirby’s home turf, turning them into bad guys or, at least, badder guys. Kirby, inexplicably, absorbs one of these hearts and gains the ability to win over the baddies he encounters and gets them to join his team. Naturally, Kirby susses out the classic antagonists (King Dedede, Meta Knight) to see if they’re the reason everything is going wonky, and finds out no, that’s not the case. There was a giant explosion on a far away planet, and these dark hearts are the scattered remnants of said explosion. Determined to free up the hearts of everyone possessed and generally stop this nonsense, Kirby hops between multiple worlds, making new friends, discovering new abilities and learning that he doesn’t have to go at it alone to make things bright and wonderful again. This plot is delivered in some pretty great, wordless storytelling, complete with fake out credits to pretend that the game is finished long, long before you even scratch the full contingency of the gameplay.

Kirby Star Allies is certainly one of the best looking Kirby games to date. Aside from my own personal love of the presentation of Kirby’s Epic Yarn, Star Allies is incredibly polished to a sheen. Everything is exactly how you want it to look in a Kirby game: bright, cheery, moments of darkness to break up the potentially saccharine settings, and overall wonderful, almost child-like imagry. From the initial Whispy Woods all the way to Jambastion (where the dark “Jamba Hearts” originated), there is plenty to look at and enjoy in terms of design and aesthetic choices. It was only a short while ago that I was playing Kirby’s Adventure on the NES and was positively blown away by how much better Kirby looked there than on the Gameboy, and this is a totally different direction indeed. What’s equally impressive is that everything looks as good as it does despite the huge number of items and enemies that potentially end up on the screen at one time. Due to the new heart mechanic (which we’ll discuss in a moment), you can find upwards of about 10 beings in front of you, all doing different things, plus multiple pickups and items that may spawn either beneath or above you, depending on the destructive environment and how you interact with it. It’s pretty awesome to realize the full scope of what had to go into making Kirby work in the way that HAL Laboratory wanted for this time around. 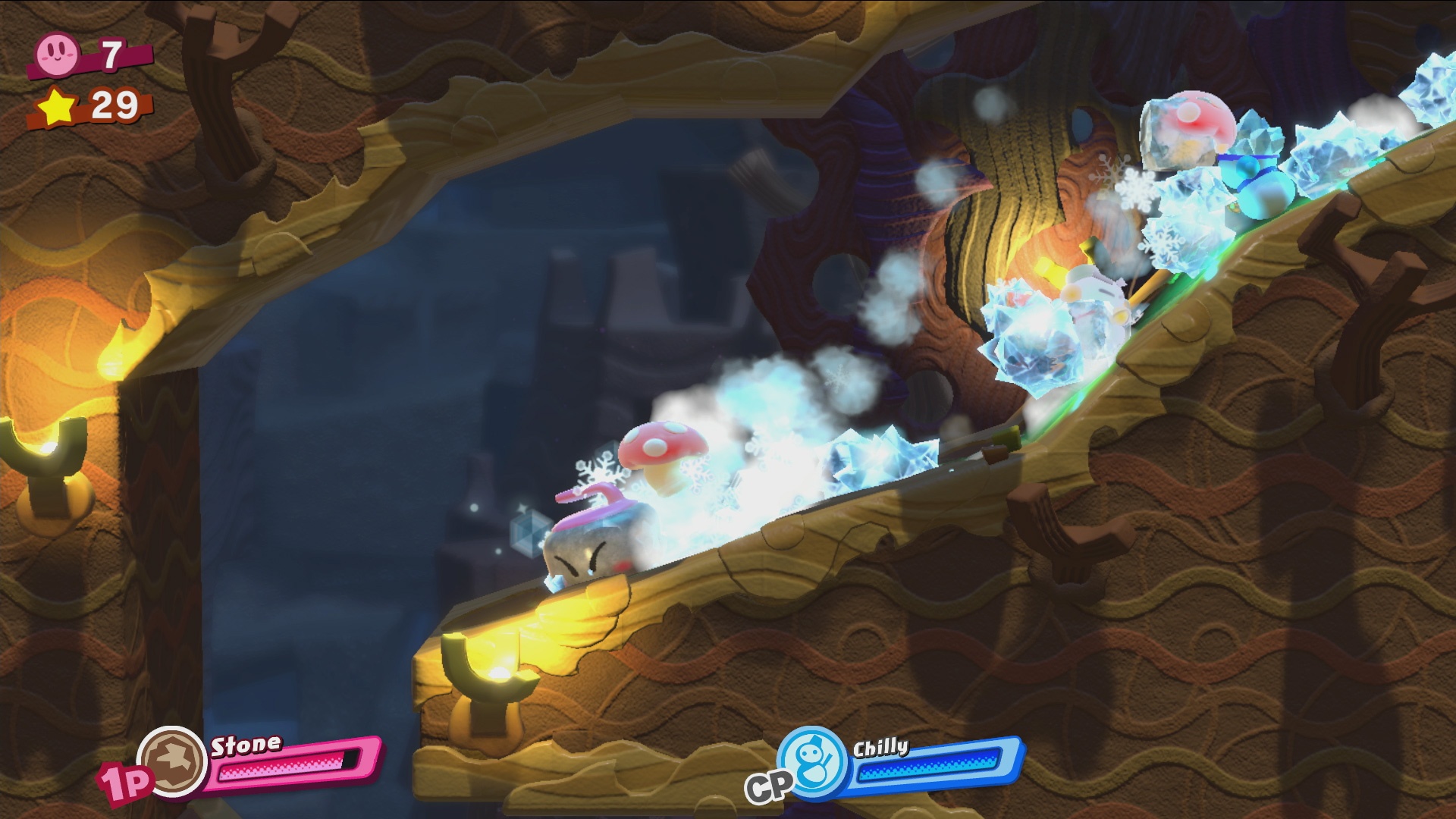 Additionally, the Heart ability is what makes Star Allies work so incredibly well and, thankfully, works well itself. Kirby has an unlimited number of hearts to toss at enemies and get them to join his side. Sure, Kirby can still inhale any number of dudes and take their powers (fire, ice, yo-yo, broomstick, etc.), but why stop with just having one power? The hearts allow up to three additional characters to follow you around, auto-attacking other baddies, helping to activate puzzles and sometimes aiding you with their own powers in conjunction. Have a sword handy? Yea, that’s pretty good, but what if you had a flaming sword? Simply raise your blade and your fire companion with set it ablaze. There are a ton of different mix and matches with the weaponry, and some are necessary to unlock hidden areas, some critical to defeat certain bosses, and some are just damn fun to do. After you vacuum up a partner once and shoot them across the room like a cannonball, how can you want to do anything else? There are a finite number of combinations, but players will quickly discover which they like best, usually picking one elemental partner (I prefer ice, myself) and a couple of classic assistants to clear the way. There’s even an area that unlocks soon after the beginning of the game where you can pick up classic companions from other games, like Dedede himself (after beating him) or the original animal friends, Rick, Kine and Coo, from Kirby 2, who I genuinely can’t wait to see. You can’t absorb their powers, but they can come along for the ride and interact and help you out in a ton of ways, and I’m seriously going to keep revisiting the game as the free DLC of these companions becomes available.

This approach to the allies allows for additional players to drop in and out of the game to help the main player, and this is both a perk and drawback of Kirby Star Allies. On the one hand, it’s wonderful for young children who want to play and not suffer immediate death or dismemberment because they’re not skilled players (knocked out companions can be revived by Kirby, who also doesn’t just lose his current power after being hit once, a double advantage). But the allies are also at the mercy of Kirby, who can swap them for another ally as he encounters them, making it kind of a Beyonce and Destiny’s Child sort of situation. Sure, the rest of the group is important, but whatever Beyonce says is the law. As a result, players who aren’t just delightfully along for the ride and actually want control of the game may be a touch frustrated. But this is important to remember: Kirby’s target audience is probably a bit younger than the rest of the Switch 1st party releases, and this echoes even more strongly in my second complaint: pacing and difficulty.

Kirby Star Allies isn’t a long game. While certainly longer than the oldschool titles, it barely breaks even with other, more recent entries on the 3DS and even the Wii. It’s fun as hell, and great to look at, but you realize that part of the length of the game is artificially created through the speed at which you move. Most modern platform and adventure games have built in control mechanics to run your heart out and zip along when you know the way or are at least brazen enough to charge somewhere unknown headfirst. Kirby, as a large, pink marshmallow, doesn’t run fast. There are some abilities he can pick up to slide or glide a bit faster, but, by and large, you’ll find him trotting along at a pretty unhurried pace for most of the game. Then, when Kirby gets to somewhere important (like, say, a boss battle), the ally system makes it almost embarrassingly easy. God forbid you have other people playing the additional roles, or things would be over in seconds. Now, this doesn’t make the battles bad (Void Termina, the final boss, is amazingly constructed), but a lot of the concept for how to fight relies on the old style of Kirby: pray you don’t get hit, fire your skill and, if you do get hit, pray for a lot of stars. But when you have three other immortal friends who could potentially all be carrying bombs or blades, suddenly the pressure is off a bit. You can brutalize your way through most of the game without worrying about strategy because, well, sometimes just hitting stuff over and over is sufficient. 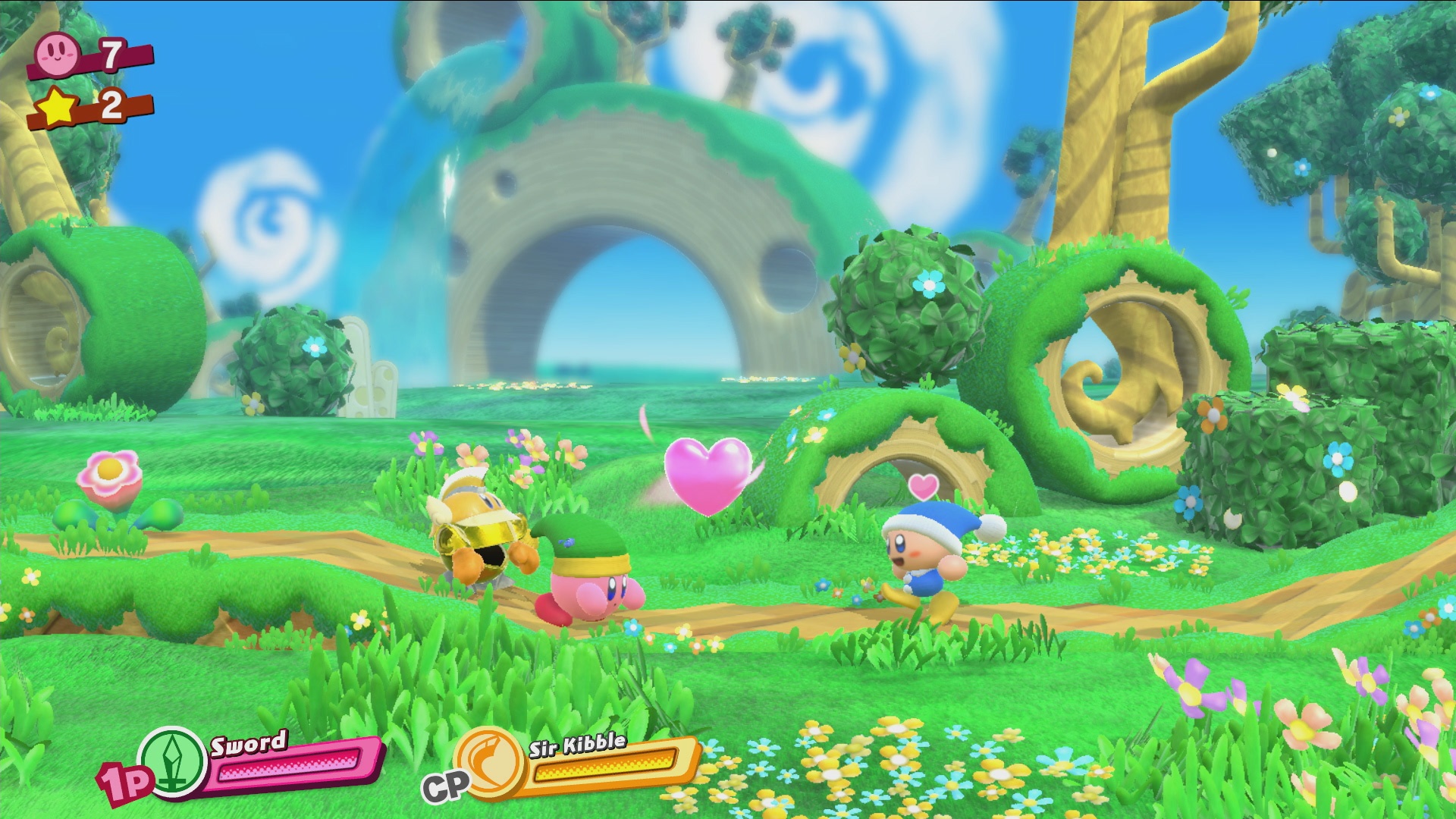 And I think that’s where a lot of the lackluster response is in Kirby Star Allies. I want to like this game better because I like Kirby, and I love the concept and the brand. My kids love this game. It’s wonderful to look at, and actually fun in a lot of ways. But it’s not a challenging game. There are things to collect (puzzle pieces in obvious places) and exciting teams to make (Bandana Waddle Dee with a flaming spear is OP), but you develop replay and excitement purely on your own love interest with the game, and certainly not from the mini games that are unlocked outside of the main. Kirby is kept afloat by the fact that he is Kirby, and not much else. If there was an original, indie IP with these mechanics but some schmuck mascot (let’s say a platypus), then this would be a cool game that’s mostly forgettable. Instead, as Kirby, I think I put my expectations a bit too high, and I couldn’t quite reach the stars.

Kirby Star Allies is probably the best Kirby game you could make for the Nintendo Switch. It’s tailor made for multiplayer on the fly, plenty of callback to other installments and explores the usage of future DLC and updates with aplomb and ingenuity. But it simply doesn’t capture the amazement and excitement that other Switch titles have generated. I wanted more in terms of worlds and variations. Maybe I’m spoiled by certain games, and that makes me feel ungrateful. Maybe I’m just getting older. Kirby Star Allies is a wonderful moment, but it won’t capture the hearts of new, adult gamers. If you decide to pick it up, make sure you have kids, because they’ll make the whole thing worthwhile.