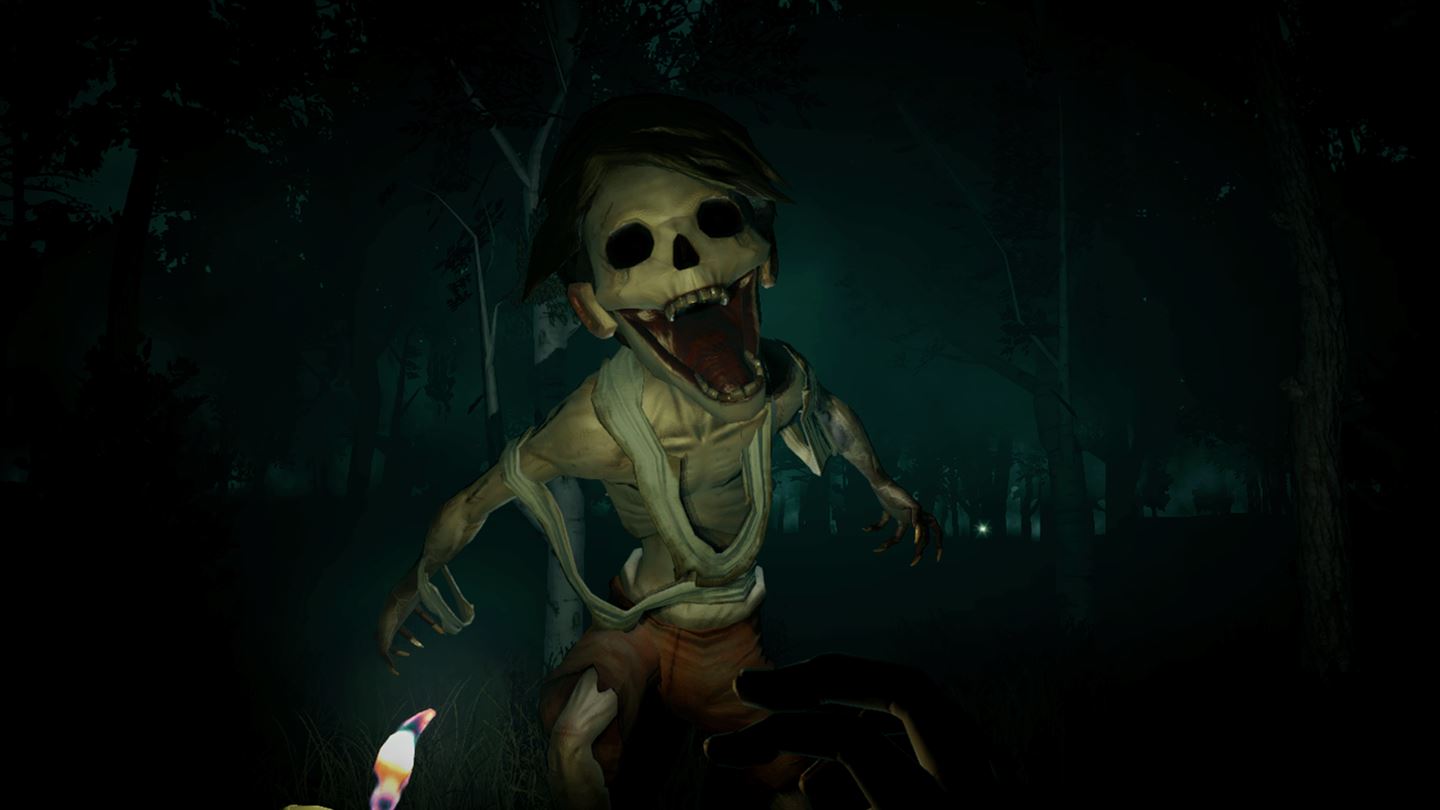 The best horror games out there tend to be the ones that make you feel powerless. Whether it be cowering in a corner in Alien Isolation, struggling with the limited ammunition found in Resident Evil or having no idea what the hell is going on ala, P.T., horror games are usually at their most effective when they put the player on the back foot. Something that Wick does very successfully……for a while at least

After the briefest of set ups, you are blindfolded before being dropped off in the middle of a supposedly haunted forest by what I can only assume are your absolutely douchebag ‘friends’. Armed with nothing more than a candle and a handful of matches, the aim is to survive from midnight through to dawn at 6am. Of course, that ‘supposedly’ haunted forest turns out to be an ‘extremely’ haunted forest, leaving you to fight for survival against a collection of super spooky little kid ghosts (surely the worst kind of ghosts). 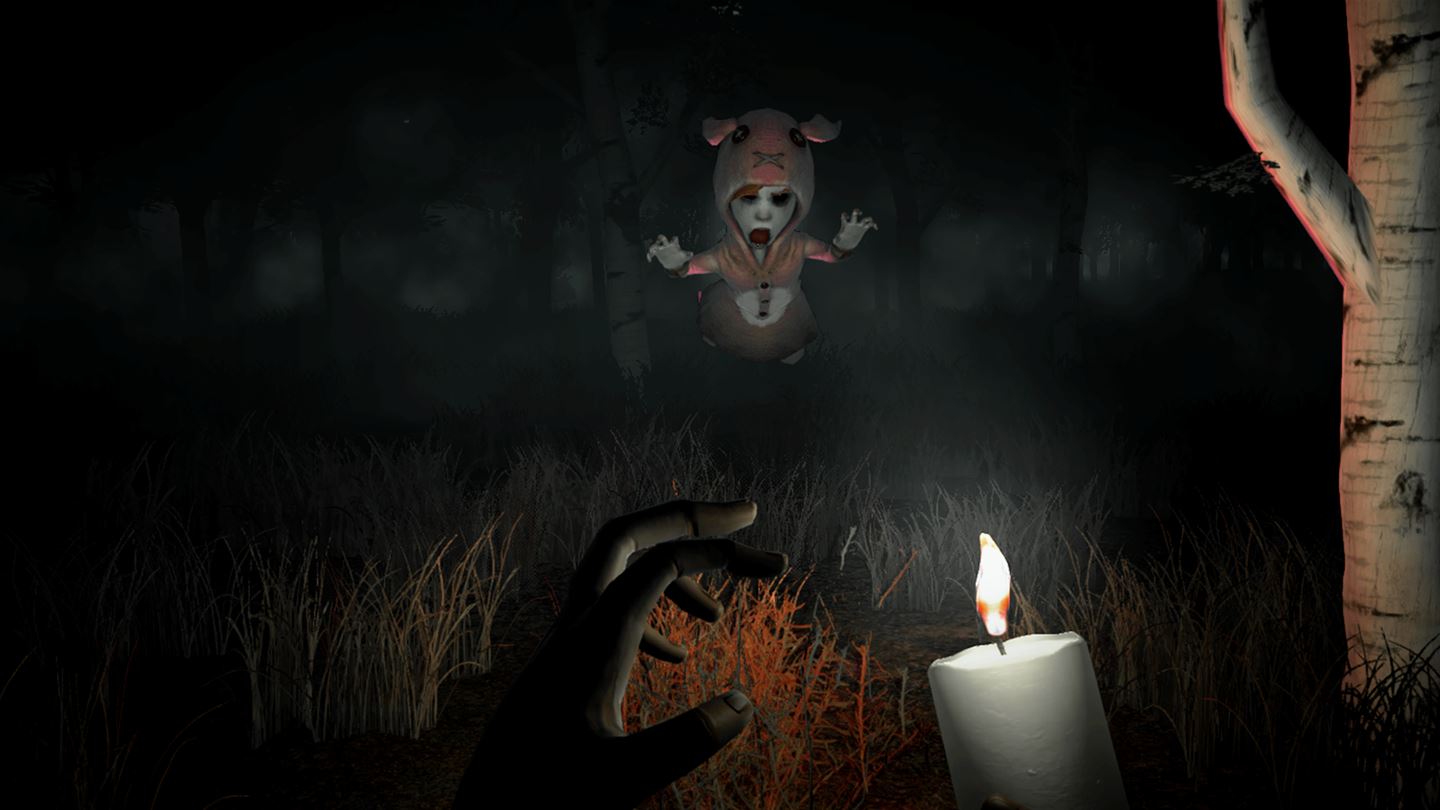 Well, I say “fight”, but in reality, it’s more about surviving. You can’t attack the collection of brilliantly designed ghost children that you’ll come across during your 6 hours in the wood, instead, you are provided with a collection clues that inform you how to survive each encounter. Some are pretty obvious (run away is about as obvious as you can get), while others are more obscure and will likely lead to at least a few deaths before you figure out the best approach.

Essentially split into 6 stages (1 stage per hour of game time), you’ll come across a handful of ghosts each hour as you explore the impressively eerie forest. The location itself remains the same across the 6 hours of game time, but with a great sense of place and unnervingly tense atmosphere throughout, I never tired of this clichéd but undoubtedly effective setting.

Sadly, the same can’t be said of its mechanics. Initially, Wick is an unbelievably tense and often very scary experience. Yes, it is somewhat reliant upon jump scares, but for the first few hours, they are extremely effective. The problem is, once you figure out the trick behind each type of ghost and tire of the continuous jump scares, everything starts to become a tad too mechanical. A few hours in, I found myself simply going through the motions, and with the scares diluted at this point, the extremely basic mechanics subsequent leave you with a rather uneventful and somewhat repetitive walking simulator. There are a few collectibles that help to flesh out the games’ lore, but it’s not enough to keep Wick interesting beyond the brilliant first few hours.

It’s a short game whichever way you look at it, but I only genuinely enjoyed Wick for the first few hours. Saying that, it’s not especially expensive, and while it does fall off around the midway point, the first few hours really are incredibly tense and extremely effective. It’s a shame that the game doesn’t provide enough in the way of unique scares or mechanics to keep it fresh for longer, but even when the game does run out of steam, it never devolves into a boring or unenjoyable experience – it just becomes a tad flat.

When Wick is good, it’s really good. The atmosphere is tense and the setting sufficiently spooky. Yes, it’s all a tad clichéd, but it works, and for the first few hours at least, is as scary as just about anything this generation. Problem is, that sense of tension is somewhat fleeting. After a few hours, the jump scares begin to lose their effectiveness and the games’ limited scope and basic mechanics become more of an issue. It’s still a decent shout for fans of the genre and certainly fun for the first few hours, but there is no getting around the fact that the scares (and fun) are decidedly short-lived.