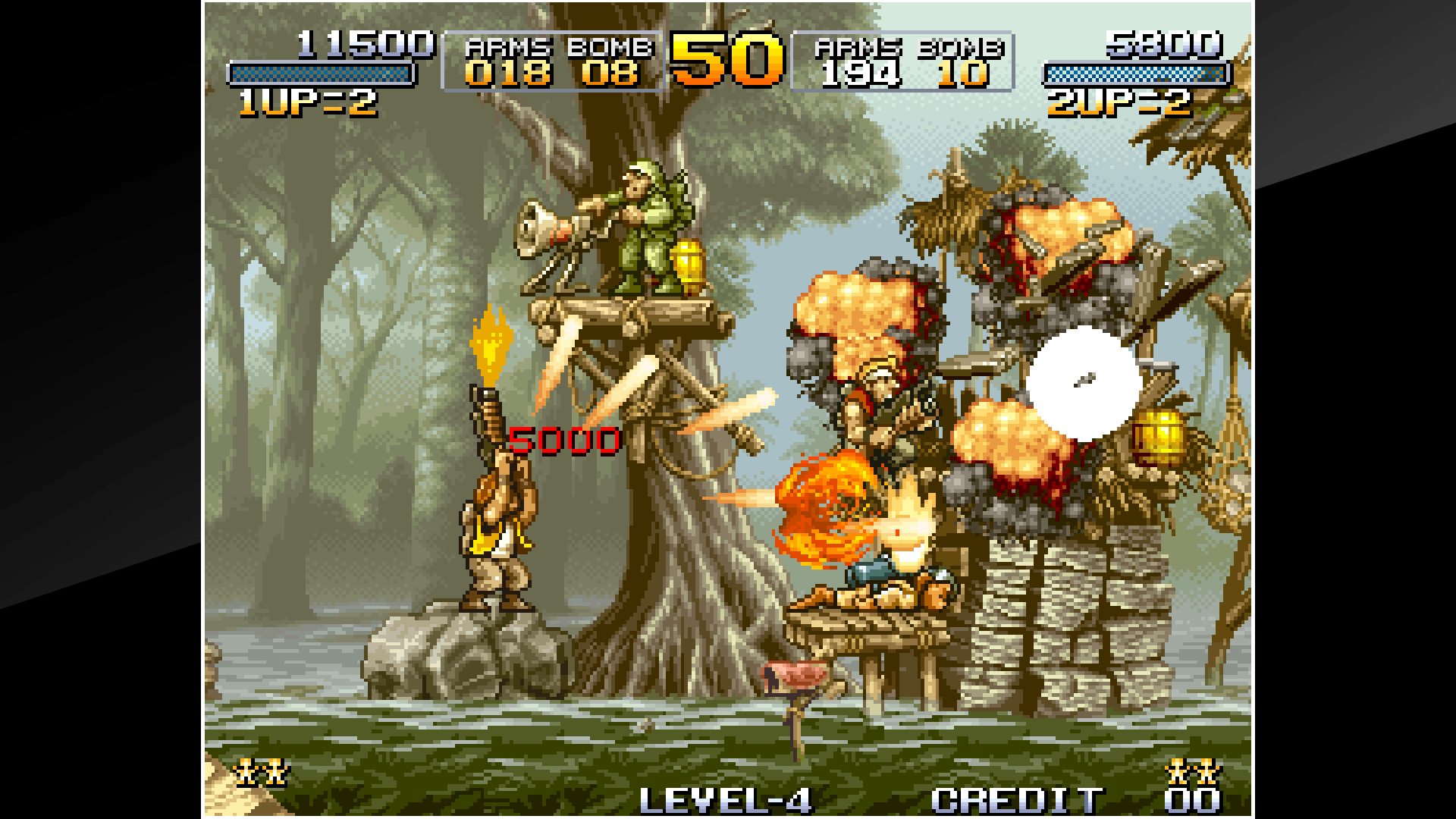 Ah, Metal Slug. This side scrolling run ‘n’ gun classic from SNK was available to play on NEO-GEO arcade cabinets during the nineties. Players take control of one of two members of the PF squad and blast through soldiers, helicopters, and over-the-top mega vehicles in an attempt to thwart General Donald Morden’s attempts to bring about the New World Order. Power-ups are available, like machine guns and rocket launchers, as well as the SV-001 (Metal Slug), an experimental tank armed with both a forward facing turret and a multi-directional Vulcan cannon. The original Metal Slug was so successful, it spawned six or seven sequels, spin-offs and countless imitations over the years. The team at Hamster Corporation have provided us all with an emulation of the NEO-GEO cabinet version, with a few extras thrown in for good measure. How nice of them.

Like all of the other Arcade Archives series, this is a pretty much a straight-up emulation of the original game, so don’t expect any extra enemies, weapons or stages. You can select either the Japanese or English versions of the game, along with ‘Hi Score’ and ‘Caravan’ modes (more on that later), but everything, from the graphics to the gameplay are identical to the original. Luckily the original is still a bunch of fun, even twenty years later. 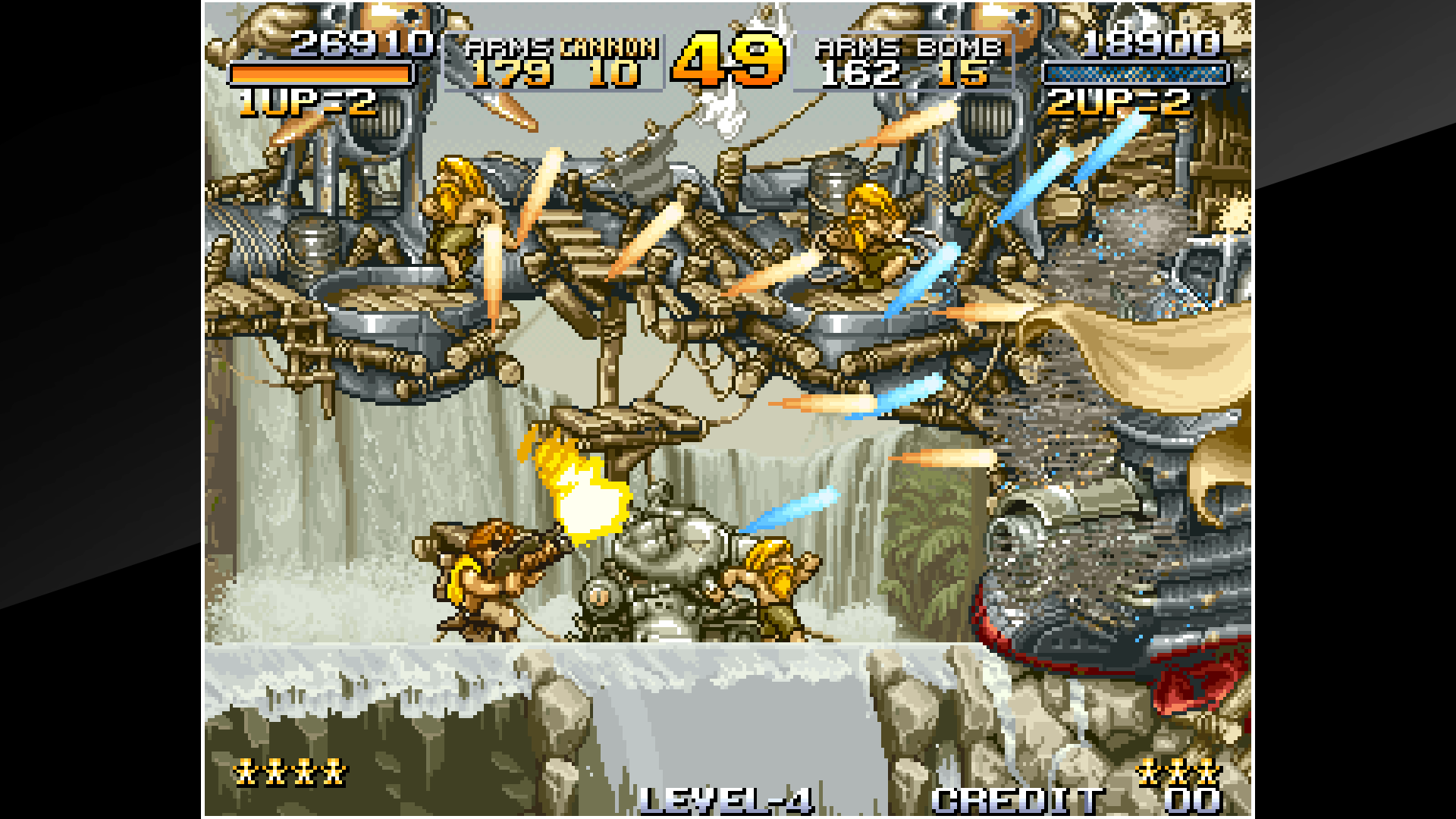 Now, I might be biased. Having grown up in the nineties, I have fond memories of pumping fistfuls of ten-pence pieces into the Metal Slug machine at the local arcade. The simplicity of the gameplay, combined with the hand-drawn visuals kept me entertained session after session, even though I never quite managed to make it to the end. As arcades faded from popularity, Metal Slug and its sequels endured, with ports made to almost every console, including the latest generation, securing its place amongst the classics.

Playing today with essentially infinite continues shows just how much effort went into make this game suck up your money. While it was great fun playing through, at times this game was head-crushingly unfair. Screens would be flooded with enemies flinging grenades or diving erratically towards you to stab you to death. Tanks and artillery fill the screen with bullets and missiles, leaving the tiniest space to manoeuvre. The bosses and mini-bosses suck up so many lives that they may as well be the grim reaper in pixel form. Playing through this game on normal difficulty took me twenty-six continues on my first run through. Twenty-six. That would have cost me thirteen pounds if I was paying old-school prices, and if the local arcade owner was nice enough to not hike the difficulty right to the max. 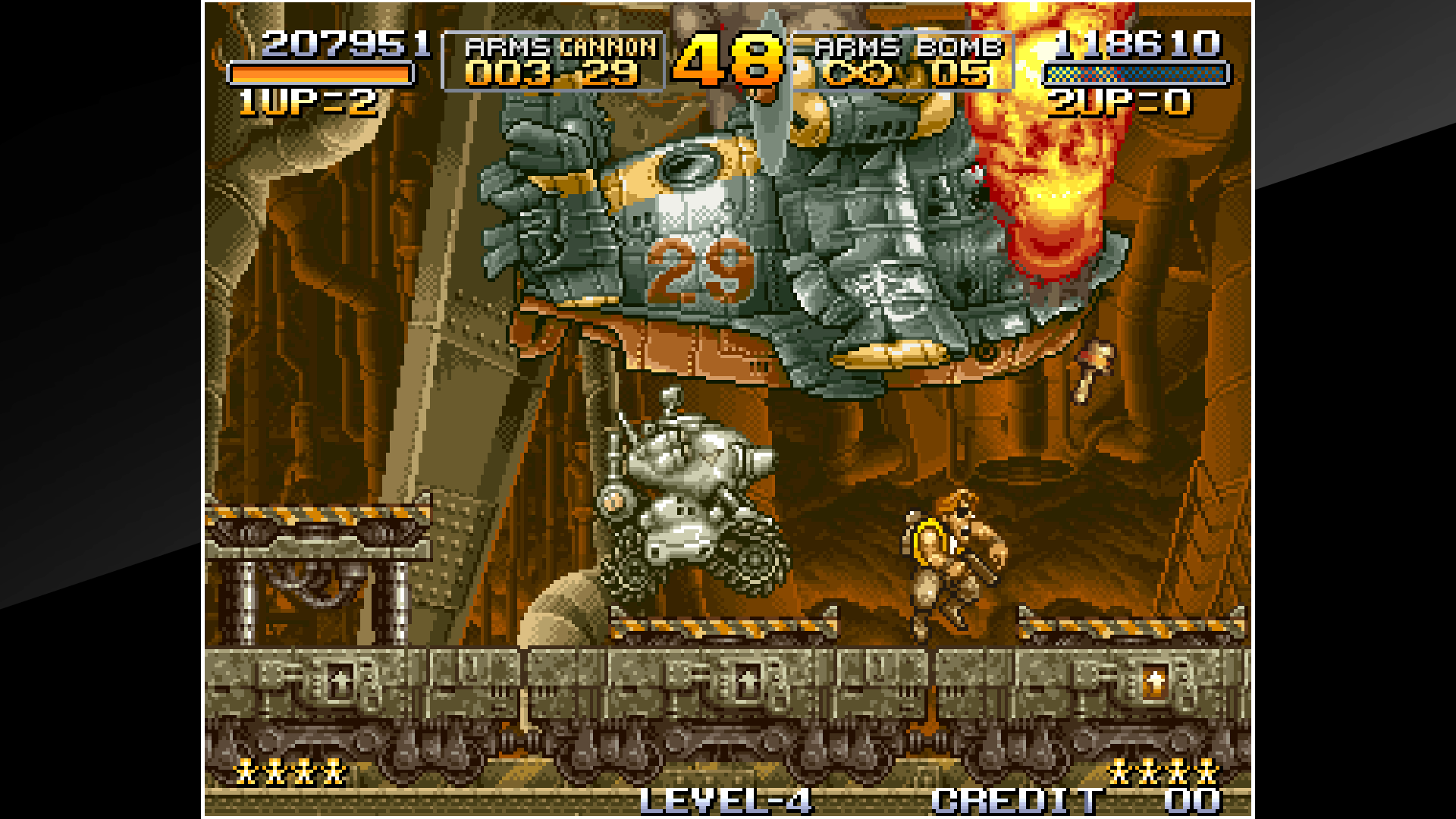 As mentioned earlier, the sounds and visuals are identical to the original. Hamster Corporation have basically given you the arcade machine version. Again, it might be the bias talking, but the fluid, hand-drawn animations really are gorgeous, even today. Aside from the fast-paced gameplay, a lot of the charm comes from the animations of the enemy. Bad guys will die with a clutch of the chest and a spurt of blood, soldiers will be flung from explosions, arms pinwheeling as they sail through the skies, and they all do it with a satisfying scream of pain. This version of the game also comes with a couple of extra modes. ‘Hi-Score’ mode allows you to play to get the highest score using just one continue, and ‘Caravan’ mode does the same thing, but with a five-minute time limit attached. While I sort of understand the inclusion of the first mode, the second mode seems a little bit pointless, as there is no way in hell anybody can complete this game, using no continues, in five minutes or less. It can’t be done. I checked. The Speed-run attempts I saw online were at least fifteen minutes long, and those guys are hardcore.

While I appreciate the nostalgia playing through Metal Slug again brings, I can’t help but feel that this isn’t going to have much replayability. I managed to complete the game on normal in just under an hour, and I’ll probably return to it once or twice more. There is no question on whether or not I think Metal Slug is a good game, I just wish this was an anthology or something. Most of the PS4 trophies were nabbed on the first play through, and while I can see some of the appeal to the ‘Hi-Score’ mode, learning to complete Metal Slug with no continues would take forever. This is a solid port of a classic, but not much else.