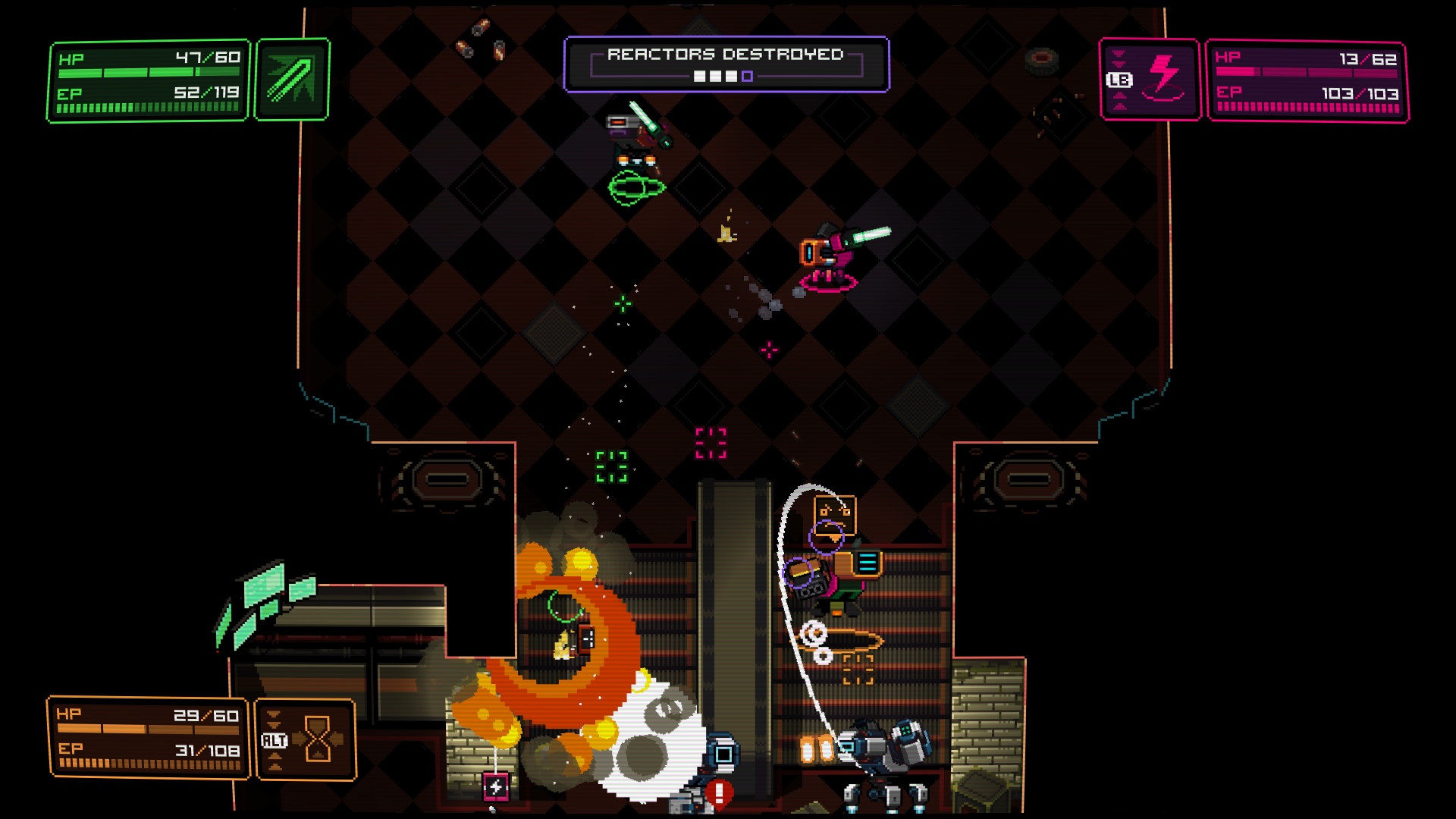 Quick show of hands; who here likes building killer robots of mass destruction? I know I sure do. There’s something about customising a hulking death machine and watching it vomit bullets and lasers like a violently ill baby that I really, really enjoy. So right off the bat, NeuroVoider piqued my interest. It advertises itself as a futuristic twin-stick shooter RPG, and I can’t argue with that description one bit. Brought to us by the folks at Plug In Digital and Flying Oak Games, players blast their way through twenty stages (including four boss stages), upgrading and customising their walking/flying/rolling gun platform along the way to defeat the nefarious NeuroVoider and end the eternal war once and for all. It’s a bullet-hell bonanza that offers a unique experience every time, thanks to it’s many rogue-like qualities.

The tutorial is absolutely brilliant in its design. You start off looking at a brain in a jar, and pressing square repeatedly explodes you out of your confinement and sees you controlling the little bouncing blob of grey matter. Another escaped brain-in-a-mech explains that you are a disgusting and slimy mess, and that there are three mechs available for you to pilot. After trying each one out and learning their initial abilities, you are asked to make a selection and to choose an additional skill from the twenty-seven available. These range from active skills, like EMP blasts that disable enemies, to passive skills that increase speed or offer an extra life once per level. After that, it’s time to start shooting. 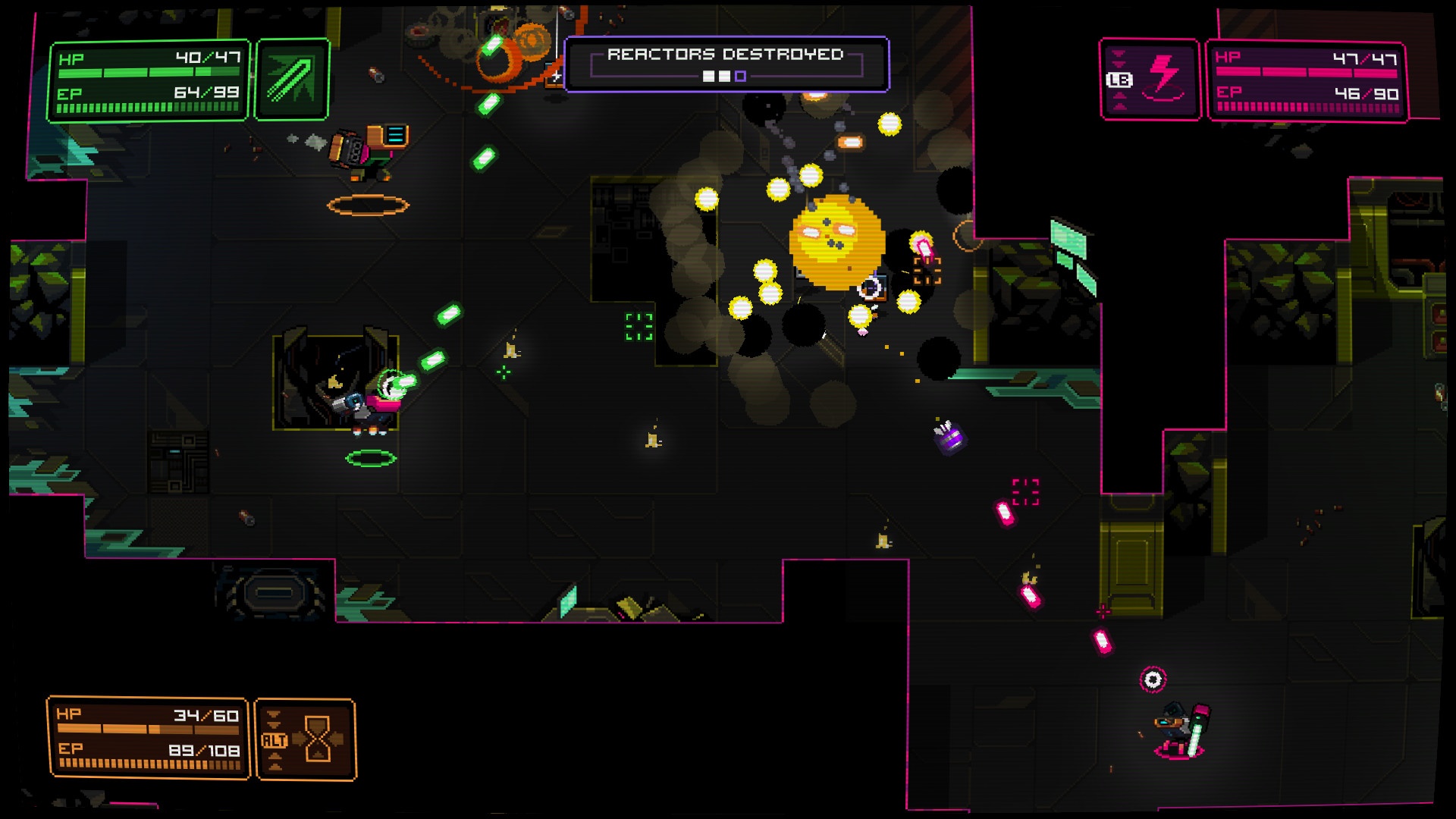 The main objective of each stage is to destroy all of the reactors. After that’s done, you’re free to teleport out of dodge and proceed to the next mission. It would be a simple enough task, if not for the army of armed-to-the-teeth electronic enemies firing plasma, rockets, and god-knows what else at you in an attempt to end your run and send you hurtling back to the start of the game. Each enemy destroyed has a chance to drop either health, scrap (the in-game currency of choice), or an upgrade for your battle-brain. These upgrades include additional ways to travel (legs and wheels and such), better power cores for more energy, and most importantly, a vast array of destructive weaponry. You can’t change-up your load-out on the fly, so making it to the end of the level is the only way to increase your death-dealing capabilities, and try out your new toys.

If you take a glance at the screenshots dotted throughout this review, you might notice that each player has two resource meters available to them. One of them is HP (no prizes for guessing what this one represents), and the other is EP. EP basically rechargeable ammo. Firing off a weak pea-shooter like weapon will drain it a little, whereas letting loose a continuous volley of airstrike missiles will drain it rapidly. You will be extremely tempted to just hold down the fire buttons until everything is dead, but depleting your EP fully will result in your mech overheating and if that happens, you’ll have to wait until its fully charged before you can lay waste to the world again. Although this is a key gameplay mechanic, it does result in most games boiling down to firing until you are almost empty, then scampering away until you are fully recharged. It’s not terrible, but I never really felt like I was going toe-to-toe with anyone, and running away, although the smartest option, never feels very heroic. 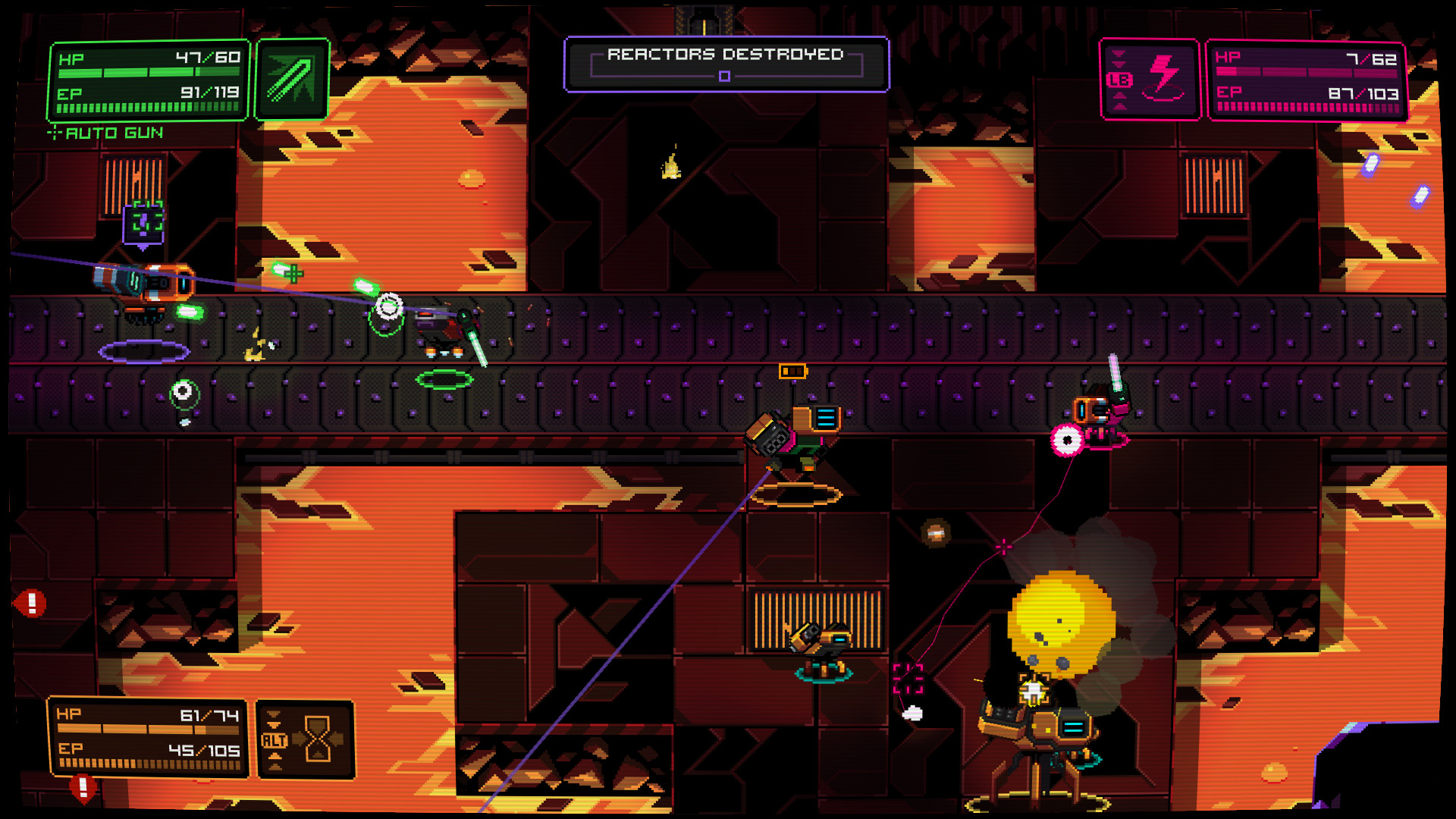 I’d say nowadays, it’s probably stranger for an indie game to not have a pixellated 8-bit visual style, and NeuroVoider has decided to follow suit and play it safe in this regard. Personally, I’m finding it harder and harder to get excited by this retro feel, but I completely understand if people are still pleased with this aesthetic choice. It doesn’t look like crap or anything, just don’t expect planet-shattering explosions that push your PS4 to it’s limits. The sound design is absolutely spot on, however. I’m not too sure of the name of the genre the soundtrack falls into (probably some sort of techno), but it’s full of synths and beeps that fit the overall theme perfectly. The weapons themselves sound pretty cool. Electric death bursting from your mech sounds suitably electric-ey, as do all the other explosions and ballistic hell that will explode from your arms.

So, there you have it. This is a pretty entertaining affair overall. I’m going to be completely honest, I couldn’t get more than half-way through this game without getting wasted and scuttling back to the start with my tail between my legs, so it’s pretty tough if you don’t upgrade in the right direction. That being said, I had a fair few cracks at it, and enjoyed messing around with the different weapon combinations available. A little more customisation would have been nice. When someone says I can design my own mech, I expect to be able to make a thirty-legged monstrosity with rocket launchers for toes and a nuke for a face, so I felt a little bit disappointed with only two weapon slots available. Other than that and the general hit-and-run tactic required to progress, this is a solid little bullet-hell rogue-like that kept me entertained for a few hours at a time, so it must be doing something right. Local multiplayer is available for those with mates, so you can come up with some sweet little combos in order to flood the screen with hot doom, and even if you finish the game, the sheer number of upgrades available mean that another playthrough is bound to be different. Being a brain-in-a-robot-suit has never been more appealing.