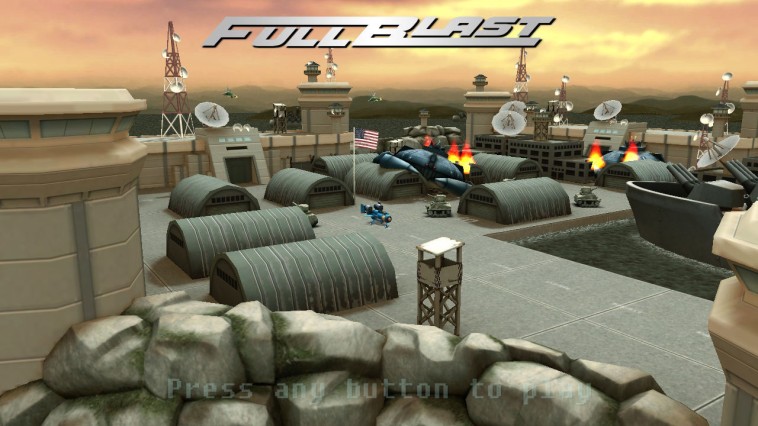 ‘FullBlast’ is a vertical scrolling, arcade style shooter, which has recently made the transition from the Android market to WiiU. Contemporary games which are based on classic genres, such as platform games, are common place in today’s digital market. However, I can’t actually remember the last time I played a modern, scrolling shooter.

There isn’t too much of a plot. Aliens have invaded the earth and it’s up to the player to shoot down as many enemy ships as possible. The designs for the alien ships seem to be based on insects such butterflies, mosquitoes, spiders, and scorpions. The backgrounds are coloured in earthy, neutral shades (greys, browns, dark greens) which contrast nicely against the brightly coloured spacecrafts and bullets. This makes all the important elements stand out and easy to see.

The game consists of 12 short levels, which are spread across 3 locations. City, Jungle, and Ocean. As the game progresses, the terrain will deteriorate and new enemies are introduced. The game plays very smoothly and controls really well. You can play with either the WiiU Gamepad or Pro Controller. You move your craft with either the D-pad or analogue stick, which are both quick and responsive, and the fire button is set to ‘rapid’ by default.

Unlike the classic shooters that you may be more familiar with such as 1942, R-Type or Thunder Force, there are some features in ‘FullBlast’ that I haven’t seen in a shooter before. For a start, the background is rendered in 3D which allows the camera view to lean back a little and create a sense of perspective, rather than be played from a strict overhead view.

Another unique feature is the inclusion of rotating battles. During certain encounters the camera view will stop scrolling upwards and begin to rotate the player around the enemy. It reminded me of the Mode 7 special effects that were often displayed in Super Nintendo games. 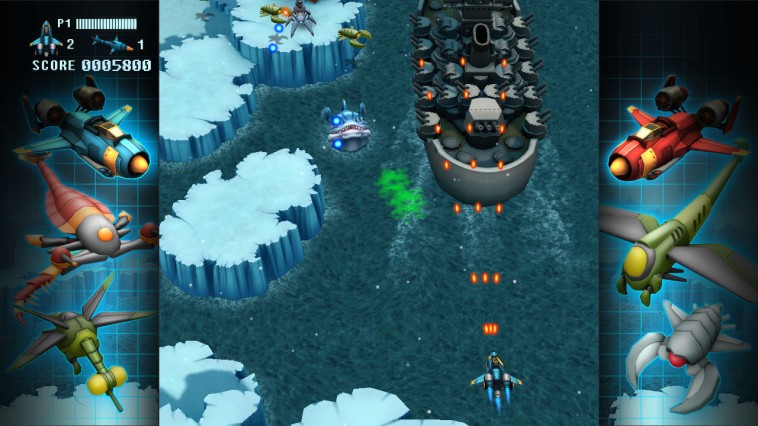 Although the game has some unique features, it does suffer from a lack of ambition in other departments. You can pick up different power ups which are commonly found in many other shooters, such as extra lives, shields, and bombs, however there are very few additional weapons. You can upgrade the range of your cannon fire, but outside of that you are stuck with the same gun throughout. In addition to the weapons, it would have been nice to see a wider range enemies and stage locations.

One area where I thought this game really stood out is the inclusion of simultaneous two player. With local co-op, you and a friend can blast through main campaign, complete with a higher number of enemies to help keep the difficulty balanced. The action on the screen can get very hectic in this mode.

The sound isn’t too bad either. There are very few pieces of music which repeat throughout the stages, but it does the job. The main stage music is rock inspired, whereas the boss theme is much more dramatic and orchestral. Ordinarily I would have enjoyed a bit more variety in the music, however this is only a short game.

In total this game shouldn’t take you much longer than an hour to beat. The game ends rather abruptly with no end cut scenes, no congratulations screens, and no completion bonuses. If you’re finding the game too difficult or would like to turn up the challenge then there is a settings menu with three levels of difficulty. Although I did lose a fair few lives, I didn’t think the game was too difficult and was able to beat it comfortably on the ‘normal’ setting. 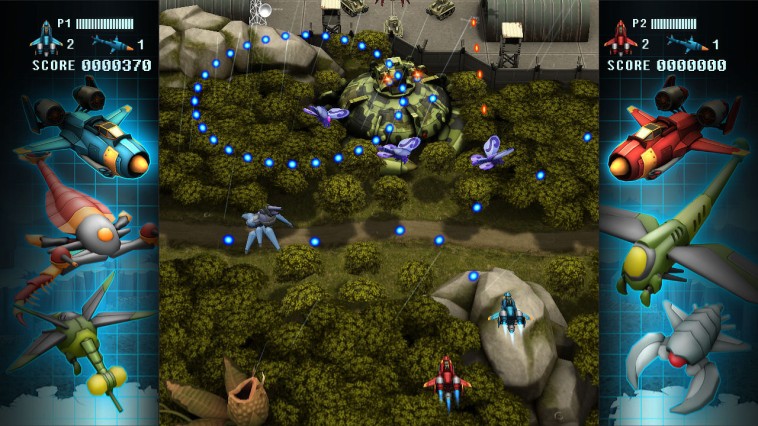 Since there is no unlockable content, there is very little incentive to replay the game after it’s beaten. There is a tiny hand full of achievements, but to be honest I think I unlocked most of them without actually trying. Although there are no rewards for replaying the game as such, it’s still a fun little blast and is a great way to kill half an hour if you fancy something quick and easy to pick up.

At the time of writing this review ‘FullBlast’ does contain an annoying bug which will occasionally crash the game when you enter the pause menu. This caught me out on two separate occasions, and the only way I could resolve it was to close the application and restart it. As annoying as this was, I’ve been informed that a bug fixing patch is currently in development, so hopefully this problem will not be around for much longer.

Overall I think ‘FullBlast’ is a decent game, especially considering its very modest price tag. It’s a fun game to pick up and have a quick blast with, and even more fun if you have a friend to tag along with you. Having said that, I think this could be the basis of a much better game if the developers take this engine and build some more variety into it. A new theme, along with a wider range or weapons, enemies, stages and maybe something progressive like an upgrade system or branching paths, that would make a truly amazing arcade shooter.

It’s a fun game to pick up and have a quick blast with, and even more fun if you have a friend to tag along with you.