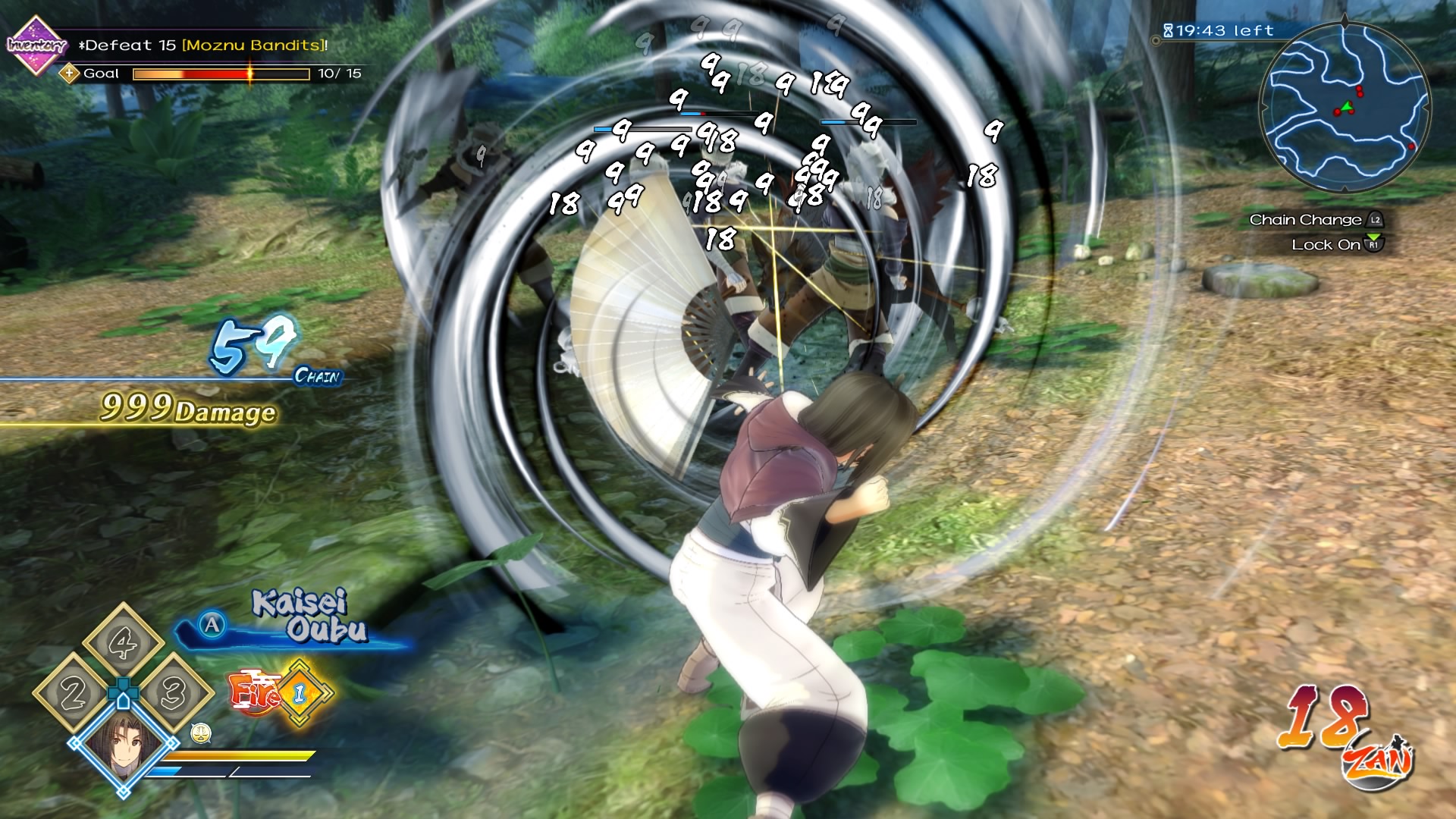 Utawarerumono: ZAN is the latest game in the Japanese Utawarerumono series. Unlike the previous games, which were visual novels with strategy RPG segments, ZAN is a hack and slash action game with RPG elements. The game was developed by Tamsoft, who are becoming well known for their action games, so you’d expect that the game is in good hands. Aquaplus, the developers of the previous two games, return to publish this new entry in the series.

Utawarerumono: ZAN features 12 playable characters that are gradually unlocked over the course of the game’s story. The game’s main content is divided up into 4 modes: story missions, free missions, battle recollections, and the battle arena. Utawarerumono: ZAN’s story gameplay alternates between action stages and story scenes. Story scenes are played out with a combination of 2D still images and scenes using 3D character models. For those who aren’t interested in the story and want to get to the action, the game offers the ability to skip all story scenes. Utawarerumono: ZAN’s story covers the plot of Utawarerumono: Mask of Deception. Mask of Deception is currently the earliest entry in the series story wise to be released outside of Japan, although a remake of the original Utawarerumono game is on the way to us next year. Considering that Mask of Deception is a 40 hour long visual novel, that’s a lot of story to cover. Utawarerumono: ZAN attempts to tell an abridged version of that game’s story, but the results are less than impressive. Many details and some plot points are left out, which makes the story difficult to follow for those who haven’t played Mask of Deception. It seems like Aquaplus are trying to expand the series’ audience by releasing an action game, which is a good idea, but unfortunately this problem is going to make it hard for newcomers to get into the story.

Utawarerumono: ZAN’s battles take place within large areas, and can feature up to 4 characters that are chosen for the player’s team. Areas are filled with many enemy minions that will swarm the player. Characters have three main attacks: normal attacks, special attacks, and chain attacks. Normal attacks and special attacks are used by pressing the square and triangle buttons respectively, and if those buttons are held, the attacks become more powerful and hit a larger area. Chain attacks are executed by pressing the circle button. This causes a circle to appear on the screen, and players need to try and press the circle button again when a ring of light overlaps the circle in order to perform a powerful attack. This can be done multiple times per chain attack, resulting in a strong combo of attacks that can heavily damage enemies. Completing a battle mission will reward you with both money and bonus points. Bonus points can be used to enhance characters, boosting their stats and strengthening them. 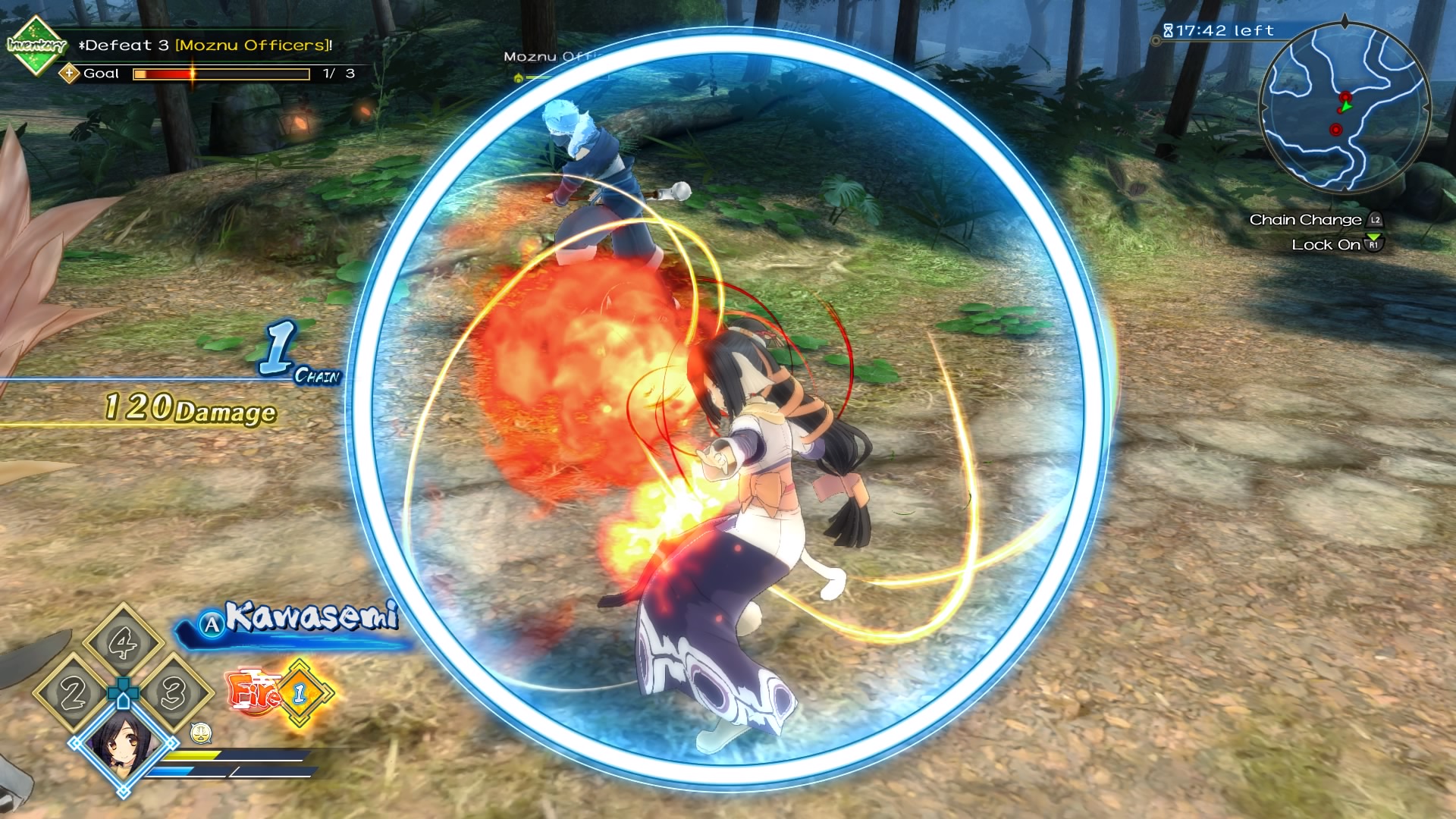 Utawarerumono: ZAN’s free missions reward players with more bonus points and money than the story missions, and are a handy way to level up your characters. More free missions gradually unlock as you progress through the story, and there’s a large number of them with a wide range of challenges to offer. They all tend to be fairly short, however, which is unfortunate. In addition to the typical battles where you have to defeat a certain number of enemies and then a boss enemy, there are also mission types like the destruction missions. These require you to travel to marked locations and destroy the obstacles there. Battle arena missions open once you’ve progressed further through the game, they feature a single character going up against a bunch of enemies. They can only be accessed after a character has been levelled up by a certain amount. Completing these missions will reward the character with a special chain attack. The other type is survival missions, where you have to keep your character alive and complete various tasks.

Equipment can be gained and upgraded through a shop available from the main menu. This is where you spend the money that you’ve been amassing while playing through the game’s various missions. There are 5 different rarities of equipment available, each with 10 different items that you can potentially get your hands on. You can pay money to summon equipment randomly from the available pool, with duplicates serving as upgrades for the item that strengthen its effect. Most of these items are scrolls, which can be equipped to characters before battle in order to give them stat boosts or special abilities. Each character has a certain number of equipment slots available, and most of them can unlock more when the player spends bonus points to enhance the character. 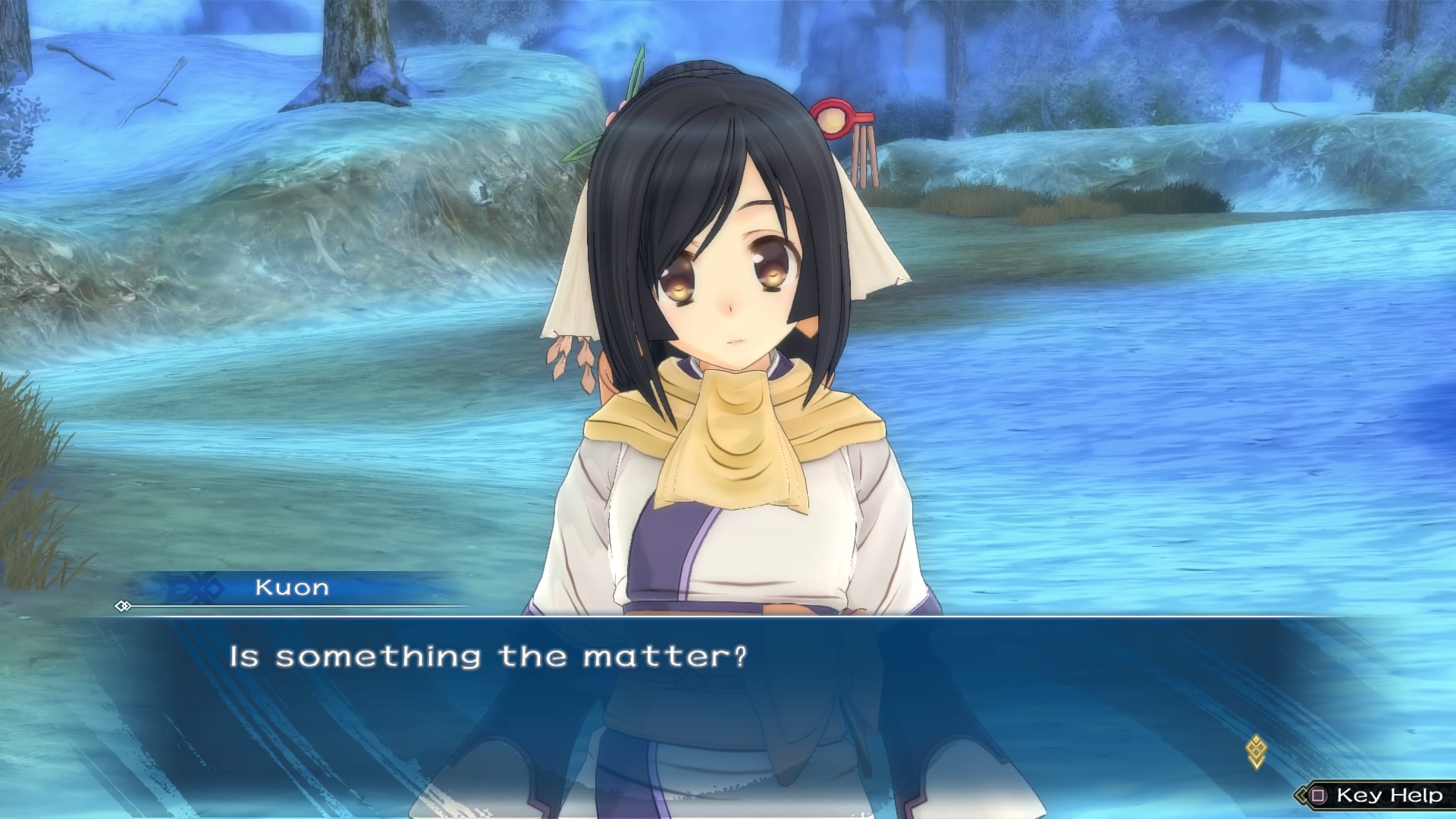 Graphically, Utawarerumono: ZAN is fairly average. Character models and environments are lacking detail and don’t look particularly sharp, and there’s some unfortunate low-res looking textures on display. It’s not quite up to the standard of most similarly priced PS4 games. The audio is fine though, with the sound effects adding the right amount of weight and impact to the attacks. The voice cast from the Utawarerumono: Mask of Deception returns, and the story is fully voiced which is a nice touch.

Overall, Utawarerumono: ZAN is a decent enough entry into the hack and slash genre, throwing a couple of interesting RPG mechanics into the mix. The game’s story features 18 chapters, and it takes about 5 hours to play through all of them. It takes another 10 hours to play through all the free missions, possibly taking a little more depending on the player’s skill level. The game plays well enough, but compared to many other games in the genre, it can feel a little lacking. The battle maps are on the small side, and the number of enemies on screen is too low. The combat itself is enjoyable enough, but the amount of content is a bit low for the asking price, and the difficult to follow story doesn’t help. Utawarerumono: ZAN is best suited to the die hard Utawarerumono fans, those who are already very familiar with the story and characters and who are looking for a different kind of experience to what they’re used to. Even so, it’s hard to recommend the game at full price, but it may be a good purchase once the price has come down somewhat.

Utawarerumono: ZAN is a decent entry into the hack and slash genre, throwing a couple of interesting RPG mechanics into the mix.