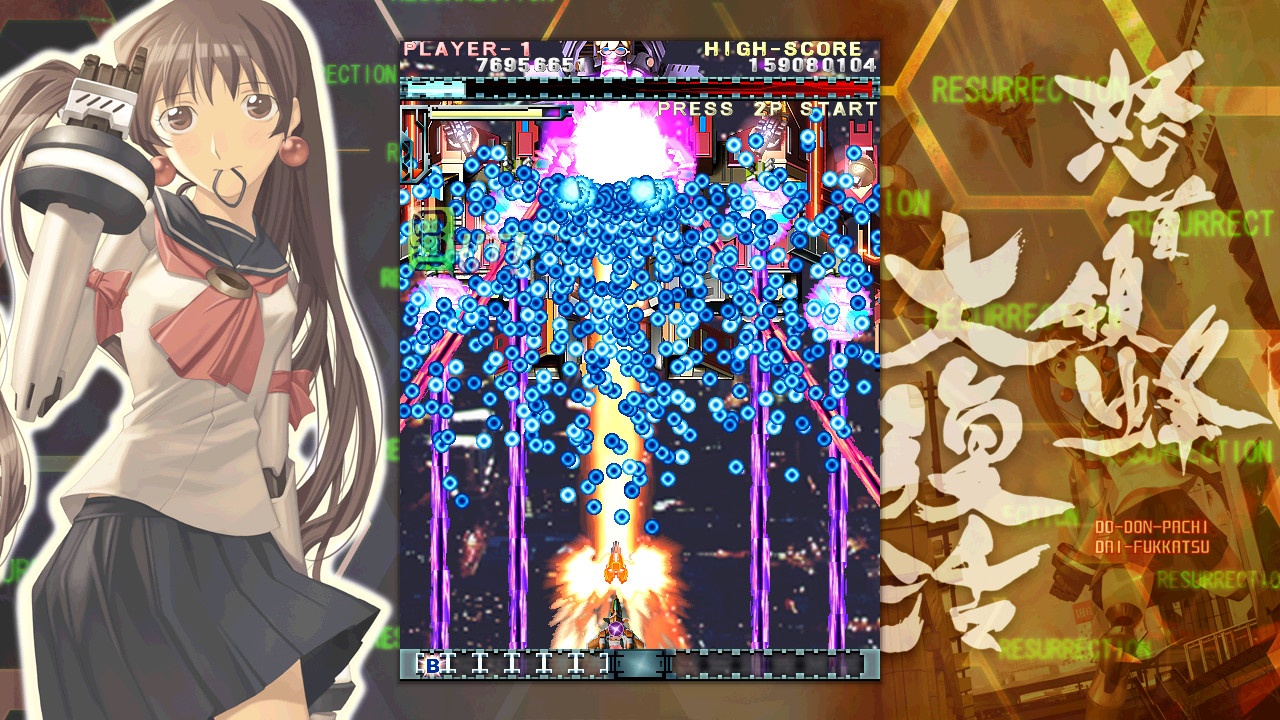 When it comes to vertical shooters and bullet-hell blasters in general, few names carry the same weight as the Dodonpachi series. Running now in its twentieth year, developer Cave along with Degica have published Dodonpachi Resurrection on Steam. Originally released in the arcades in 2008 and since ported to Xbox 360 and iOS, Resurrection has enjoyed unanimous acclaim since then and can now add a legion of PC gamers to their loyal fanbase.

Resurrection on Steam stays faithful to the series solid reputation for delivering finely tuned arcade “shmups” to all manner of systems. What you’ll be treated with here is a wonderfully presented vertical scrolling mess that requires little dedication to enjoy, but demands your utmost if you aspire to top the leader-boards.

I consider myself a fan of the genre but I’m not particularly skilled by any means, so I was glad to learn that Resurrection offers easy-going players infinite continues. This means anyone can experience all of the stages and boss-battles the same as any seasoned veteran, albeit with a much more modest entry to the endgame leader-boards. This is a welcome feature for me personally, as it allowed me to freely admire the stunning and timeless 2D explosions and effects without worrying how many ships I had left. The game in fact uses a mixture of two and three-dimensional effects that results in a truly top-tier presentation. As a bonus, it also supports a 9:16 display ratio that dials the arcade authenticity to 11 if you’ve got a swivelling monitor like my own BenQ, or if you don’t mind simply turning your monitor on its side. 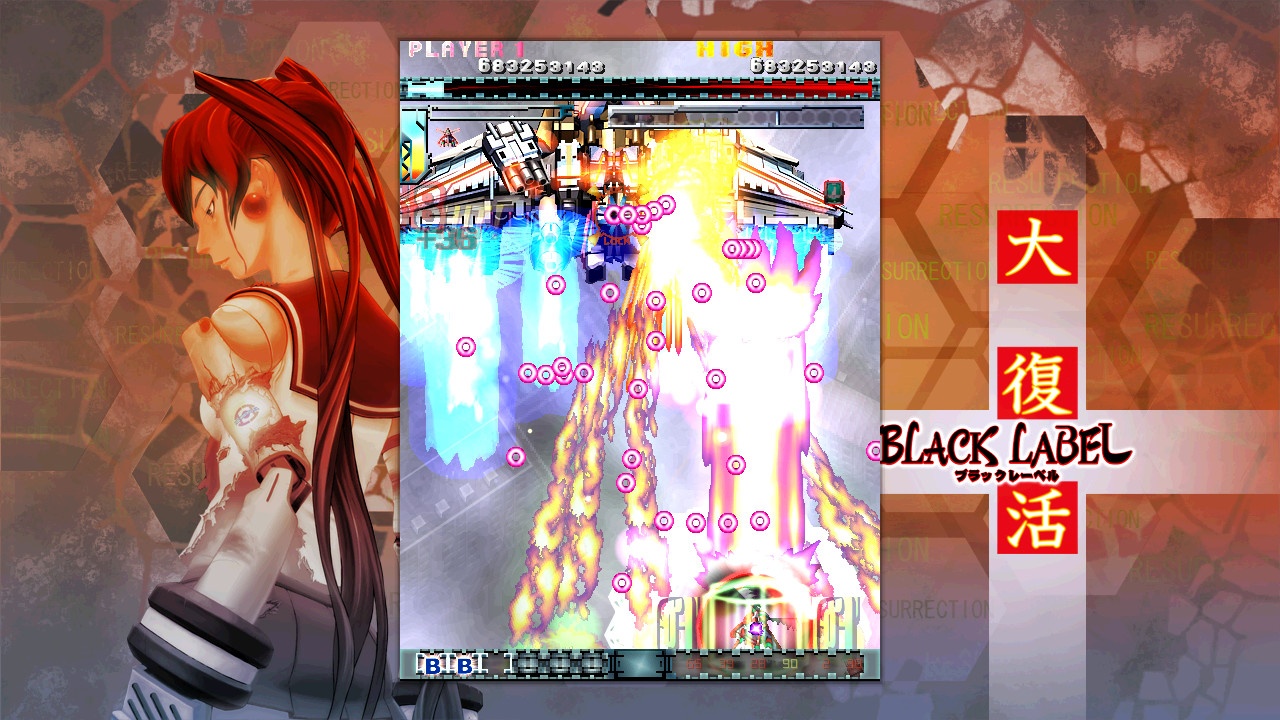 The campaign allows you to choose between three different ships and playing styles that emphasise on different qualities like speed, offense and defence. Once you pin down a style that works for you, you’re ready to save the world… or galaxy… or just win in general. I won’t pretend to know what the running storyline entails, but it seems to revolve around the destruction of giant Japanese robot ladies, which is sweet.

Being a shooter, you’d be forgiven for thinking that all you need to focus on is where you point your projectiles and how much chaos you can unleash. While its true in part, the more challenging and significant facet of gameplay is avoiding incoming fire. You’ll find that Resurrection becomes more akin to a colourful movement based puzzler than anything else as you’re forced to anticipate enemy fire patterns and manoeuvre accordingly to avoid damage. You’re given a at least a little wiggle room in this regard considering hostile fire must hit the very core of your ship to constitute a direct hit. That’s where the mercy ends however, as completely avoiding a hit for extended periods is a real stretch under ideal circumstances, and seemingly impossible at its worst. 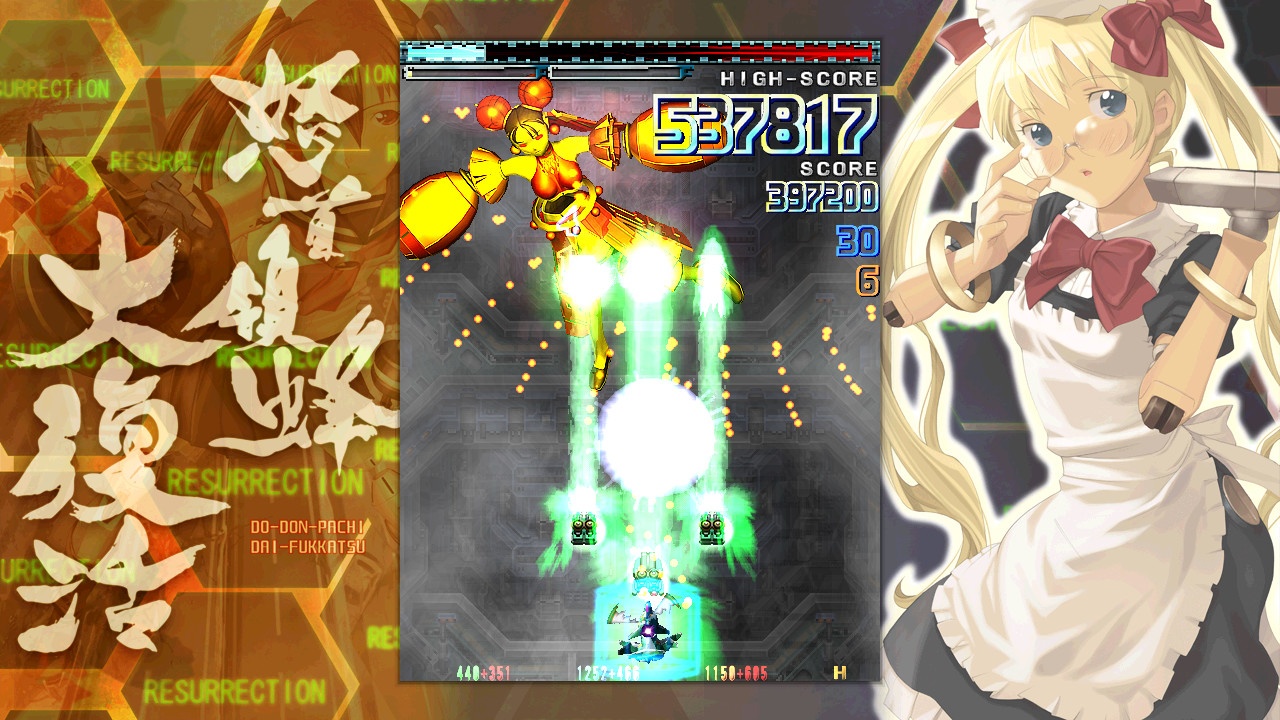 DoDonPachi does pretty much everything right, but it’s not a brand new game and at its current price on Steam it just feels that the developers are chancing their arm a wee bit. Having said that, the shmup fan base are generally easily pleased, especially when presented with well polished products such as this. My only issue was the games inability to map my Xbox controller correctly. It recognised the controller correctly but the buttons were mixed up and required remapping every time I booted the game. Anything other than that though would be nitpicking, and this reviewer don’t pick nits, son.

To the beginner, Resurrection is a truly daunting and fiercely challenging shooter, even when compared to some of the toughest the genre has to offer. Sure, you get infinite continues but its hard to feel like a badass when you’re dying every five seconds. However, with a little time and effort, you’ll be navigating your ridiculously overpowered ship through oceans of enemy lasers and missiles like nobody’s business. Oh, and you’ll love every minute of it because Dodonpachi Resurrection is in the elite category for its genre. Shooter junkies will revel in it, because they don’t come much better than this.