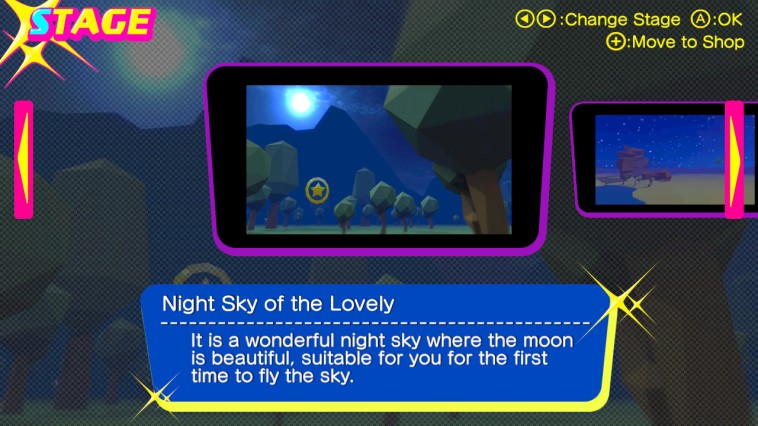 Vroom in the Night Sky is a strange little title. The Nintendo website itself describes the game as a “Magical Bike Action Game,” although I think that gives a very vague idea of what you will be playing. You step into the shoes and enormous hat of Luna, a witch who has signed on to be a Magical Bike Girl. The player gets onto their enchanted motor scooter and proceed to sail around the night sky, collecting gems and Stardust for…reasons. Once all the Stardust has been collected in a level, a gate will open and you can proceed to the next stage.

If you are looking for a game’s sole requirement to be cute, then Vroom might be able to win you over on aesthetics alone. Our main character, her little helper sidekick and everything else in the game screams with anime cuteness. The concept itself is adorable: a magical girl who flies on an enchanted Vespa to collect stardust? Amazing. Plus the whole thing feels very whimsical throughout. You encounter a nemesis in the second level, another magical girl who wants to collect all the Stardust. In true-to-trope fashion, Luna treats her antagonist as an old friend, even though “Teruko-Chan” wants to be feared and taken seriously. It’s campy, but it’s still endearing.

Along the way, you can take the Stardusts that you collect from stages and achievements (called Memories) and use them to upgrade your bike, which is a relief. The very first bike you start out with is exceedingly painful to use in handling and speed, and it really feels like a chore just to get through the tutorial. You should have enough gems by the end of the intro, however, to buy one of a handful of newer bikes that vary in speed, handling and power. There is the promise of significantly better vehicles on the horizon, but they take substantially more gems. Some bikes can even be unlocked from Memories, but there’s more on that in a moment. 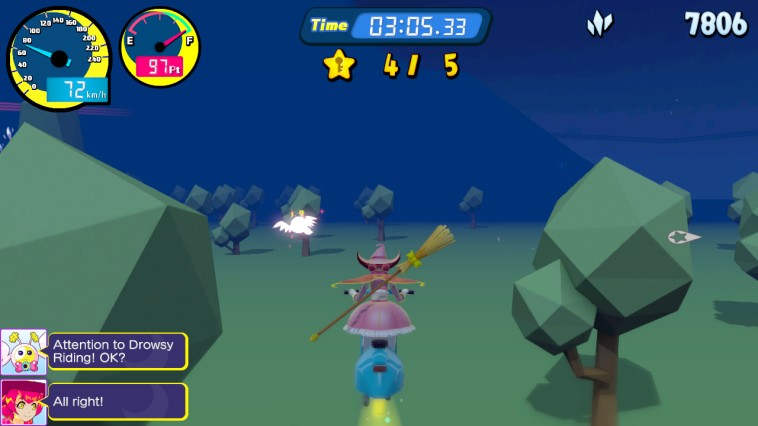 Vroom in the Night Sky is also now the second game I’ve played that is making good use of the HD rumble feature. I don’t know if all developers considered this, but the HD rumble really does give a nice, immersible vibe to certain aspects of a game. The fact that the Joy Cons hum and purr like I was actually holding onto motorbike handlebars is novel and kept a bit of the game alive for me. You feel yourself accelerate, brake and, inevitably, smash into some scenery. Even though it didn’t make up for all of my displeasures with the game, it still was something that I appreciated.

However, after you get over the cuteness and the rumblings of Vroom, you aren’t left with a lot. The motorbike does handle terribly, even with an upgrade. The starter bike turned like a tank and made accomplishing the simple intro incredibly frustrating from the very start. The newer bikes are better, but that’s like saying I prefer getting punched in the stomach than the eye: neither is something I’d sign up for. The controls also don’t fit with the stage design. You have these big, vast and pretty landscapes that leave Stardust peppered pretty far apart, which leads to a lot of moments of riding in a straight line, in the sky, just trying to bridge the distance.

There isn’t any real incentive to the game as well. You collect Stardust because that’s what you do. The villain appears to also collect Stardust, but that doesn’t even appear to be a viable threat, because she’s slow, low to the ground and seems more interested in the random small gems than the huge Stardust gates you need to finish the level. There are definitely stronger bikes, but it takes A LOT of gems to unlock them, which requires trudging through quite a few levels in order to get to where you need to be. I get the feeling most players will completely lose interest before they reach the watermark to get a bike that’ll make the experience worthwhile. 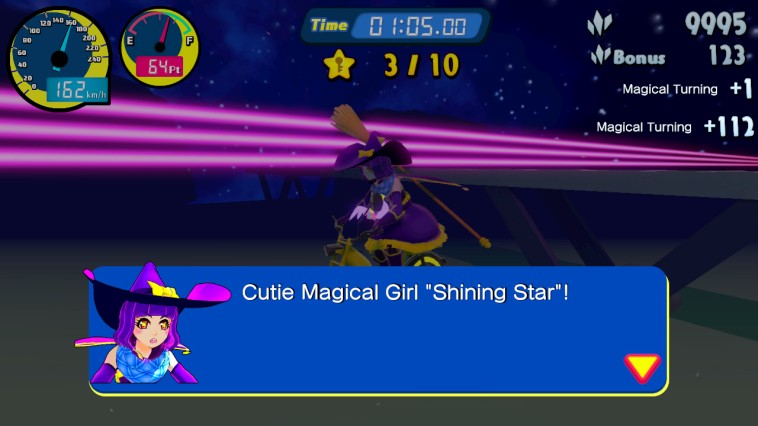 I also don’t totally get how to “defeat” Teruko-Chan. A couple Memories suggest that you can defeat her in different levels in order to unlock some bikes and large Stardust rewards, but the game and your sidekick don’t reveal what needs to happen there. I collected more gems faster, I beat my speed on the level, I tried crashing into her multiple times…nothing. And, again, frustration at the situation will probably limit players from wanting to discover the secret of what is needed to unlock the Memory.

Lastly, as a nitpick, the translation of the game is really bad. POISOFT, the company who published Vroom, has previously focused on mobile games strictly for the Japanese market. Vroom is their first foray into English, and I feel like they may have tried to handle the task by themselves. Everything feels off in the dialogue, walking a line between comical and confusing. There is a running feed on the side of the screen during levels where Luna and everyone one just makes comments about the stage and their relationships, and it is peppered with weird non sequiturs and spelling mistakes. It certainly has its moments, but it mostly just distracting and sometimes annoying when the same phrases keep getting uttered in the course of the level.

Vroom in the Night Sky is cute, and maybe has the right audience out there somewhere: people who are enjoying these indie titles are that nearly mobile games. But there is so much lacking in this game: purpose, replayability, any kind of ambition to keep going. I wanted to like this game, because I root for the underdog and I welcome new devs to all platforms. However, for the same price, you could be playing Blaster Master Zero, and that’s not even a question where to put your money. Unless you’re ready to make a drinking game out of it with your friends who want to be a kawaii magical girl, I can’t recommend this game.