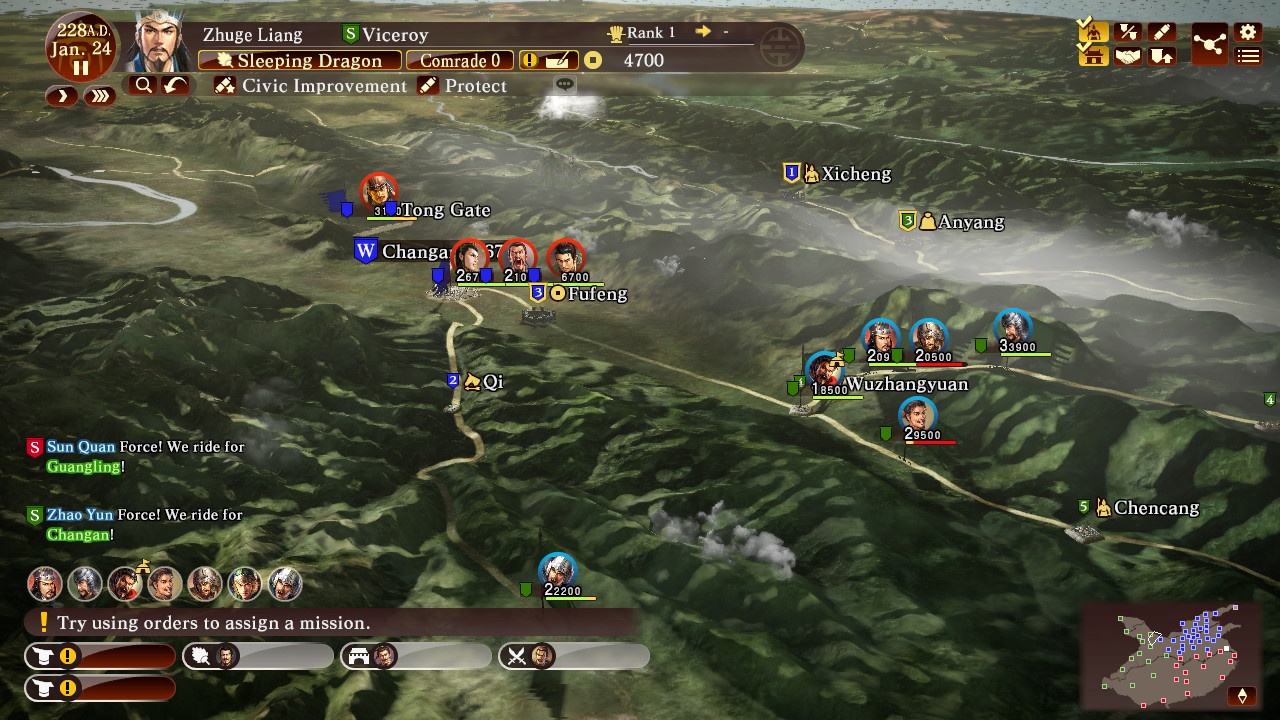 I’ve never played any of the Romance of the Three Kingdoms games before, which I find surprising since this is apparently the thirteenth of them. It turns out that although Romance has been around since 1985, this is the first iteration to have been released in Europe, so I guess I can forgive myself. Thankfully, much of the content associated with the content depicted in the world of Romance is familiar to me (as it will be to you) due to the fact that it takes place in the same semi-factual setting as the Dynasty Warriors series.

This familiarity with the characters, systems and even terminology of the Dynasty Warriors series actually really helped me get through the first few hours of Romance, because my God, this is some of the slowest and most cumbersome strategy gameplay that I’ve come across. Now, please don’t take that as too much of a knock, because Romance isn’t a bad game, but you should know that you can’t just drop in and expect the kind of knockabout strategy that is featured in say, Command and Conquer. Heck, even the Total War series seems light on options outside battle in comparison to Romance, even if it is vastly, vastly more competent in battle, which is where Romance begins to falter.

The game begins with the suggestion that players should work through a series of interwoven side stories, each of which features a particular officer or leader within one of the warring factions. These bite sized chunks of gameplay act as tutorials for each of the key game components including diplomacy, battle, recruitment of officers, deployment of troops, giving gifts, starting a family, gaining prestige and lots and lots more. As a fan of the Dynasty Warriors series that has some deep-seated memories of the characters and relationships in the crossover world of both titles, I really enjoyed seeing friendships and rivalries form in this mode. Romance is never light on story beats, even if the dialogue occasionally suffers from overly enthusiastic translation, and even if you don’t care for these characters like I do, I expect you will after several hours of playing Romance. 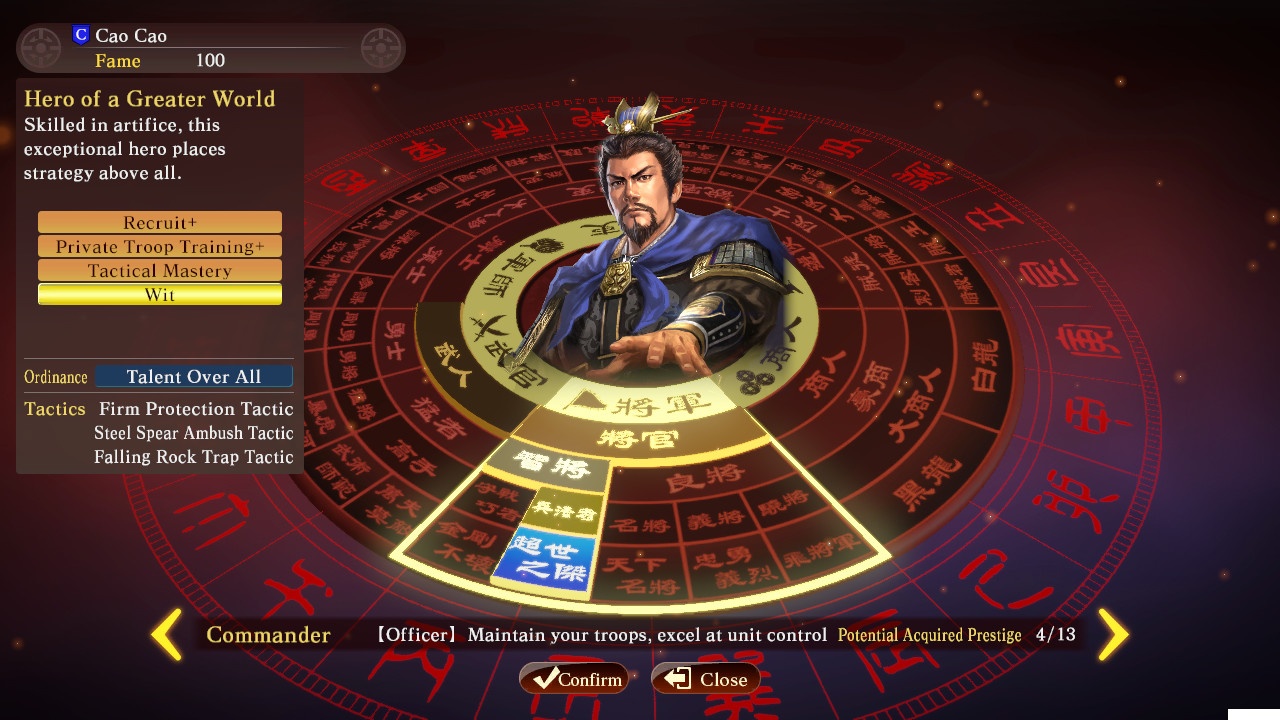 The bulk of the game is played on a large map of China set during the twilight years of the Han Dynasty, around 200 AD. Players can see cities, towns and characters on the map as fairly clear, three-dimensional objects when zoomed in, but at full zoom the map changes to a much more functional strategic view that provides colour coding and character/faction initials to demonstrate control of the many provinces. The range and volume of key characters and locations did occasionally become daunting, so the ability to zoom out and see the big picture was extremely useful during my first few hours of play.

When in this strategic view, players have literally tens and tens of options and views to wade through, and without the assistance of the rather excellent tutorials, I would have been completely lost. Thanks to them though, the game slowly begins to unveil its complex and cumbersome logic, and it becomes apparent that so much of what seems strange about Romance is actually in the difference in culture. An early mission teaches us that if we want a neighbouring province to ally with us, we must first spend time with them, gain their trust, learn what ails them and then address it. In return, they will literally become indebted to our clan, enabling us to call upon them when the time comes, unless they wish to face the dishonour of refusal.

Another early mission results in a debate between a ruler and his subordinate lieutenant. During a debate, the intelligence of each character is compared and used to generate a series of dialogue options that compare against each other in the same way as paper, scissors and stone. More intelligent characters generally gain access to upgraded versions of each (that act as trump cards) and that enables them to more or less steamroller over a much less intelligent opponent. The example in the tutorial is more or less rigged in the players favour as you would expect, but when these debates occur later, they can trigger many consequences good and bad, including officers disobeying or even minor coups.

I make the two examples (and they are not the only two that might seem strange to western gamers) above because it’s important to understand what strategy is in Romance. It’s not really in the real-time combat mode that occurs when two armies meet (which is crap by the way;) it’s more in preparing for it to the extent that you can’t lose, or in avoiding it all together. Using officers to recruit others through their network of contacts, securing supply chains, forming and breaking alliances and winning prestige all plays a part, as do the tens of other mini-processes that you take part in. 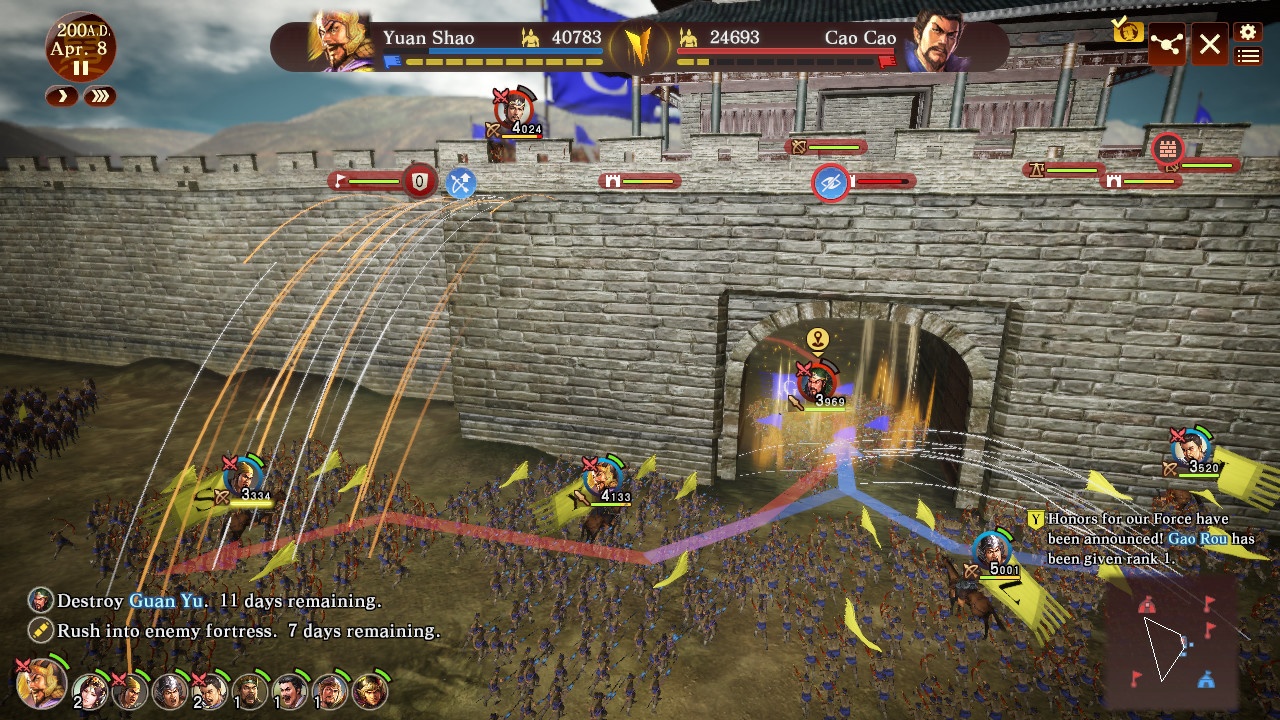 As I said before, combat is crap, so I don’t know what more to say about it really, other than to briefly describe it. When armies meet, each officer leads a unit depending on their own personal attributes (some units are bigger, and there is a meagre selection of unit types including cavalry, ranged and melee.) Combat takes place at a level just a little closer to the ground than the strategic map, but on a much smaller map such as across a few fields, or on the outskirts of a small town. There is limited strategic value in the things on the map – your archers can’t fortify a farmhouse and hole up for a desperate last stand, for example. It’s more a case of moving your units in such a way that you gain a numerical advantage over enemy units, then watching the countdown until they rout or are wiped out. On average, it is a numbers game, and wherever I had more than about a disadvantage of say twenty percent or more men, I generally tried to avoid combat because I couldn’t find an effective way of making the odds even. Characters do have special abilities sometimes, but they will not overturn a disadvantage to the tune of several thousand men, no matter how effective they may be.

Before I close, I’d also like to mention the artwork and the music in Romance, both of which are something special, even though the in-game graphics are mostly very functional and ordinary. Romance has a mostly beautiful and varied score that fits the theming of the game perfectly, and the character art is equally fabulous and very endearing. I’m so glad that Koei Tecmo ditched the awful soft rock that accompanies so many of the Warriors games (both Dynasty and Samurai) in favour of a more fitting, classical score.

Overall, I can’t deny that Romance of the Three Kingdoms XIII: Fame and Strategy Bundle is incredibly niche and will appeal only to a limited audience. I also suspect that those who it does appeal to will already have bought it, or plan to regardless of anything I might say on the matter either way – and why not if they’ve waited until the thirteenth episode for a UK release? For everyone else, I urge you not to write off Romance without giving it a moments thought. It is a much better game than I thought it would be, and it is entirely different to what I was expecting. It’s as unique and interesting in new and unusual ways as it is flawed and dull in others, so I have to give it an average score. But, with a fair wind and a bit of bias, you could easily find another point or two in the rating.