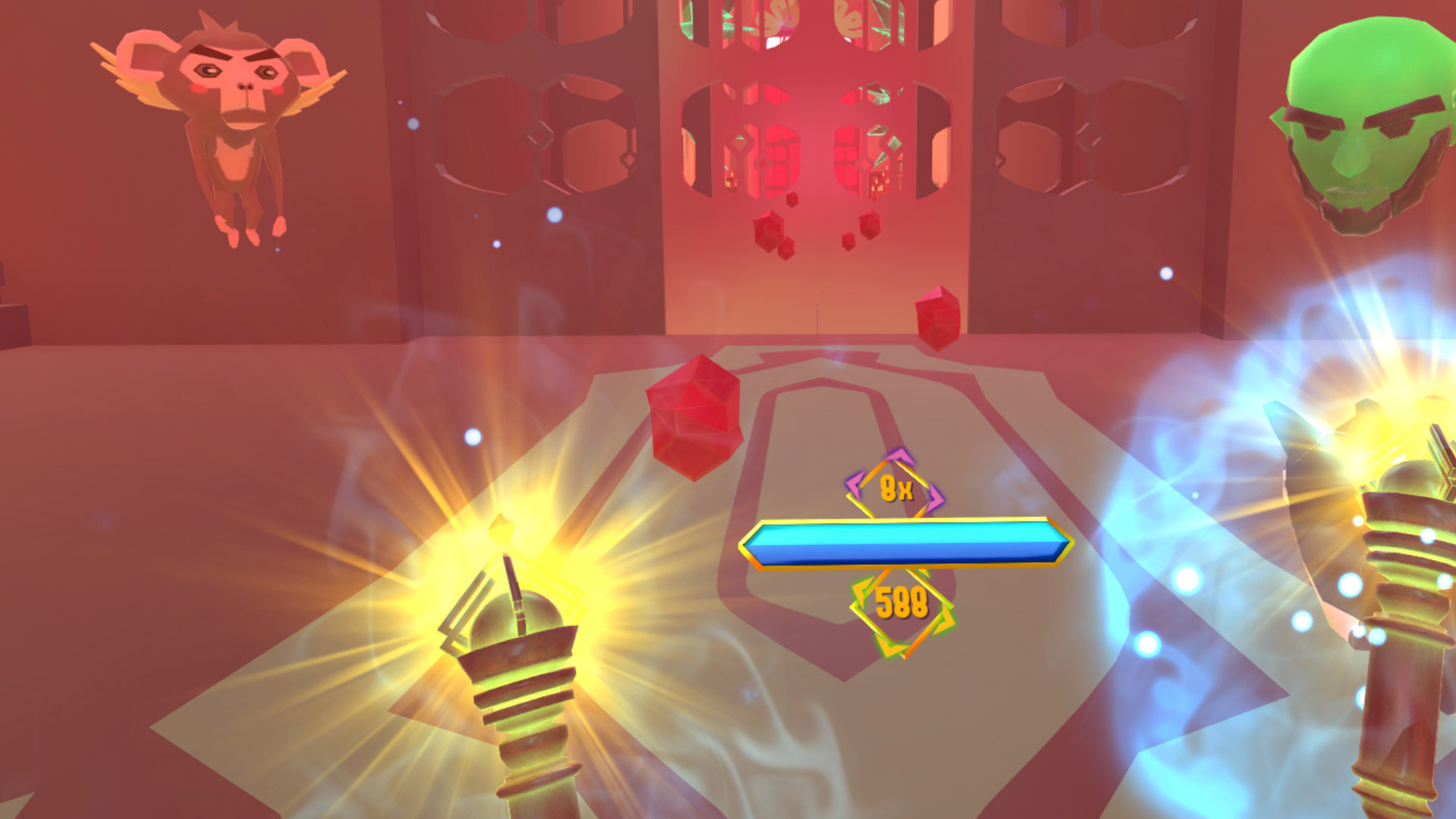 PSVR allows players to dive into worlds and feel immersed like never before. But one of the things I never anticipated wanting to do, was to throw myself into the world of The Wizard of Oz! Run Dorothy Run is a rather silly take on the classic movie, where you’ll run endlessly alongside Toto, the head of the wizard himself, and a flying monkey that decided to team up with you. The running is automatic, all you have to do is move your arms around and touch the gems with your wands while listening to them cheer you on, taunt you, and argue with one another.

Run Dorothy Run is a rhythm game where you run through a few different settings while waving your arms around like you just don’t care. Like any rhythm game you’ll be moving to the beat, and I was really surprised at just how enjoyable these original tunes were. As a metal-head, I’m usually at least partially embarrassed by the music in rhythm games, especially when they use popular pop/rap/hip hop music. I can only describe this as some upbeat jazz, but it was really catchy and even repeated plays didn’t change my mind about enjoying it. 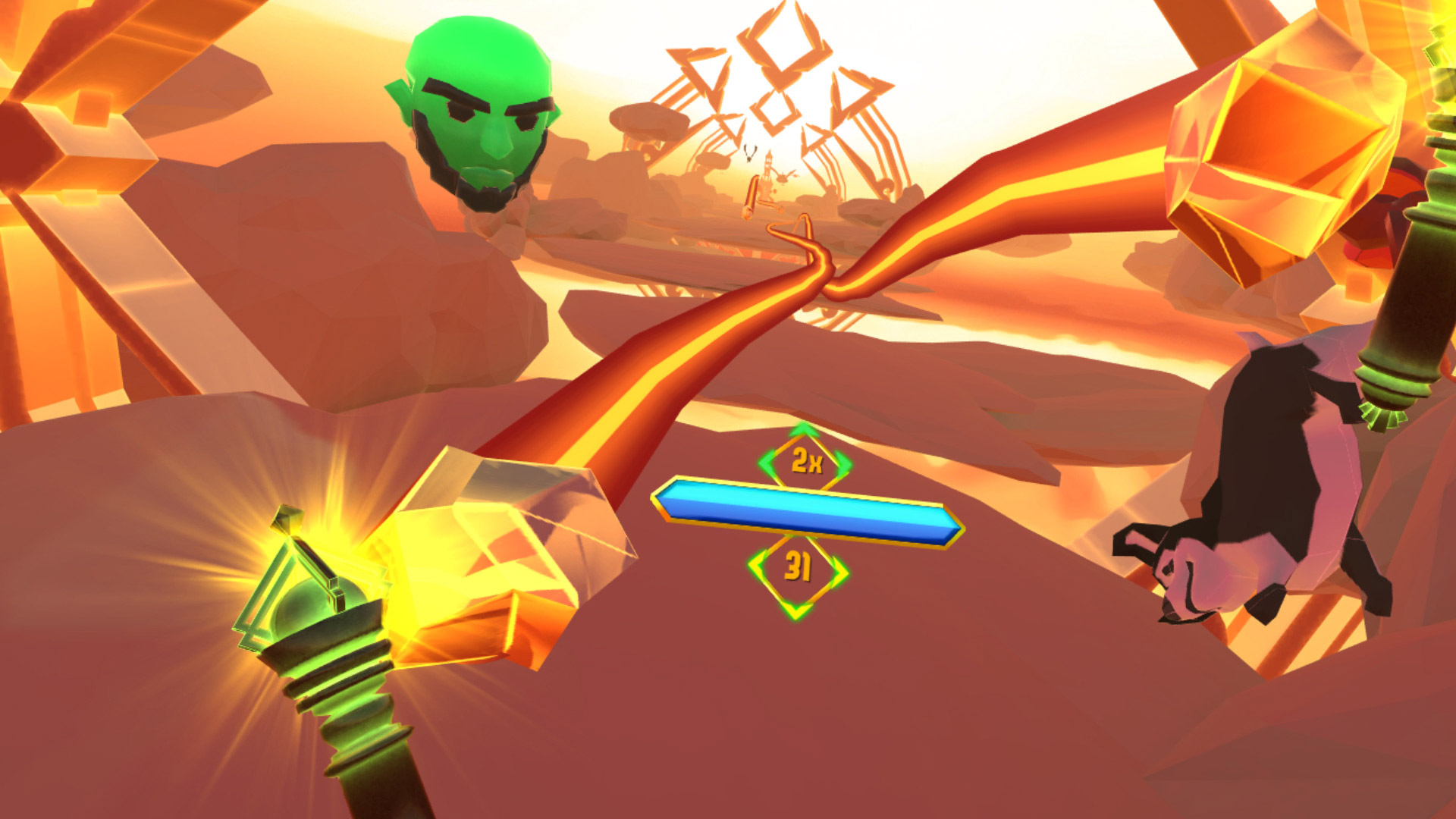 Gems are scattered throughout the levels and all you have to do is touch them with the wands (your move controllers). This is easier said than done, since they appear about as often as hard mode Guitar Hero notes; even on the easiest difficulty. There are also two powerups you can grab, and they get used as soon as you grab them. The dog bone sends Toto after a few gems beside you, and the gem powerup doubles your multiplier temporarily, allowing you to get up to a mighty 16x mutliplier! In addition to the gems, you’ll also be parrying violent animals that rush at you, deflecting projectiles and punching giant flying monkeys right in their big dumb faces. Seriously, I cannot downplay just how much I hate the giant flying monkeys and how badly they deserve their punches in the face! There are also some gems that have extended trails behind them, and you’ll need to keep your wand within the trail the best you can. Some are straight, but they’re often crazy, wavy trails. Sometimes the trails even alternate, so while one hand has to slowly lower itself, the other hand has to raise up, or one will move from side-to-side while the other is swinging around collecting gems.

The move controllers vibrate when you grab a gem, so you’ll always know whether or not you successfully grabbed each of them. This is especially important in Run Dorothy Run because you really don’t have the time to look and see if you grabbed them. Like most rhythm games, you have a bar that raises as you successfully collect gems and drops when you miss them or get hit by enemies. Unlike many rhythm games, easy mode really isn’t very easy. In fact, I found myself terribly stuck on the 9th level because there were two of those awful giant flying monkeys in a row. Even in easy mode and even with a full bar, two punches from the monkeys cause an insta-fail. 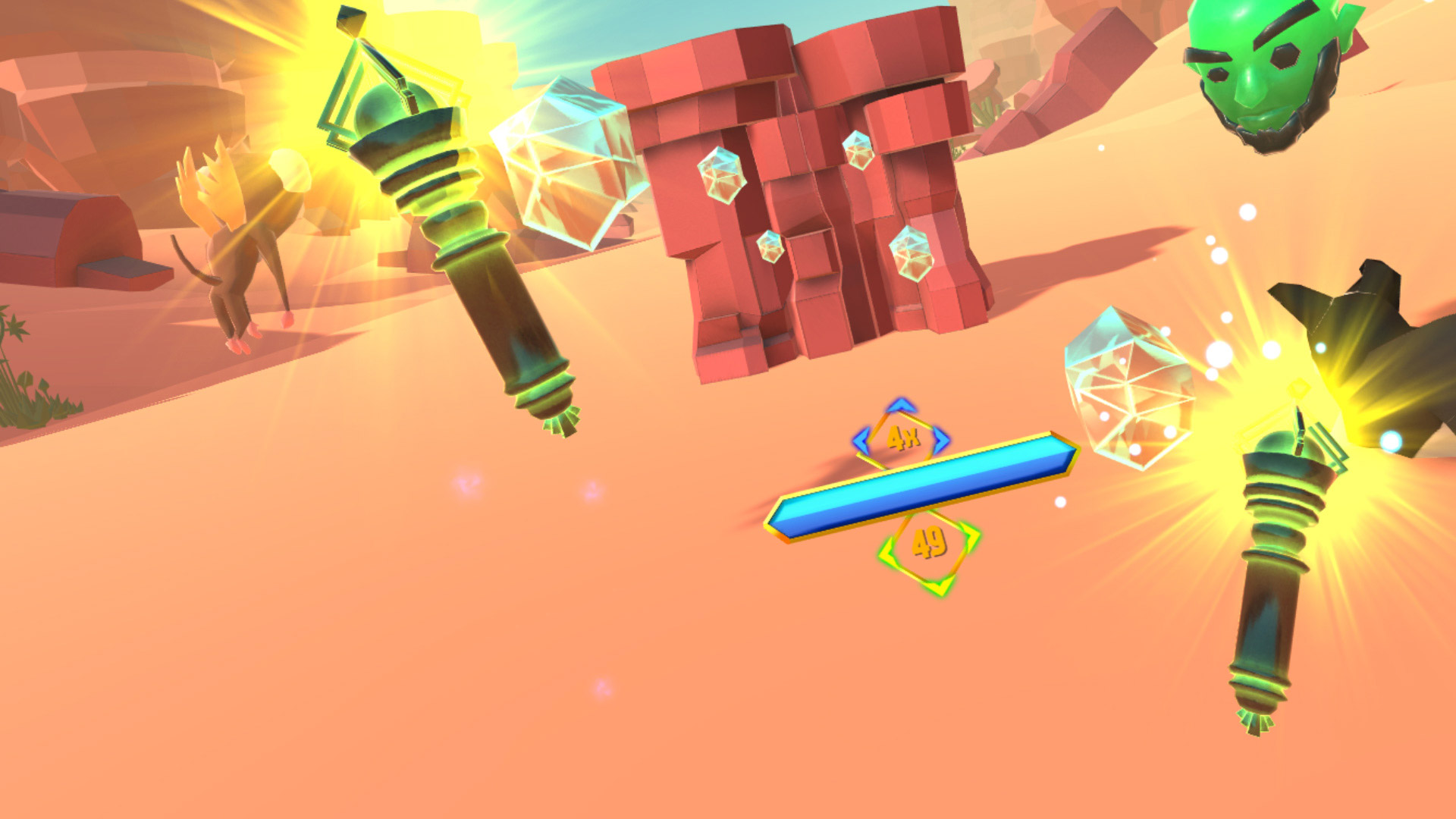 As for the workout factor of the game, this one wiped me out FAST. I guess I never realized just how exhausting reaching all around myself would be. I actually had to stop after a good 30-40 minutes, and then when I came back an hour or two later, I was only able to play a few levels again (levels average around 2-3 minutes each) before quitting. It’s a completely different muscle from the ones I’m used to using, meaning that the game is absolutely perfect for strengthening myself in a new way! With that said, it’s much less cardio and much more stamina than something like Beat Saber. Luckily, calibrating arm length goes a LONG way here, so if you feel like you’re unable to handle the game, you can merely calibrate it in the settings and try again.

Run Dorothy Run is a fun game. The music is great, the exercise is solid and with even the easy levels being so difficult to earn five stars on (the maximum number of stars), there’s a lot of replayability. While there aren’t many different level backgrounds, they’re unique enough to make the game feel fresh. In the sky levels, for example, one of the giant flying monkeys carries you and a smaller one carries Toto. Besides, the game is so hectic that it’s hard to notice anyway! It’s worth mentioning for the serious score-chasers that there are no online leaderboards, so once you get five stars on all three difficulties of each level, you’ll only be trying to beat your own scores. It also would’ve been nice to have a randomize button or some sort of playlist option where the game would throw you into multiple levels in a row, or additional optional challenges like not missing more than 10 gems on a level or playing through a level at a quicker speed. But most importantly of all, would be a mode where players don’t have to worry about failure, so kids, those less skilled, or those just looking to work out could still enjoy it.

Collect gems with your move controllers as you run through whimsical levels alongside the Wizard of Oz, Toto, and a flying monkey in this PSVR rhythm game.