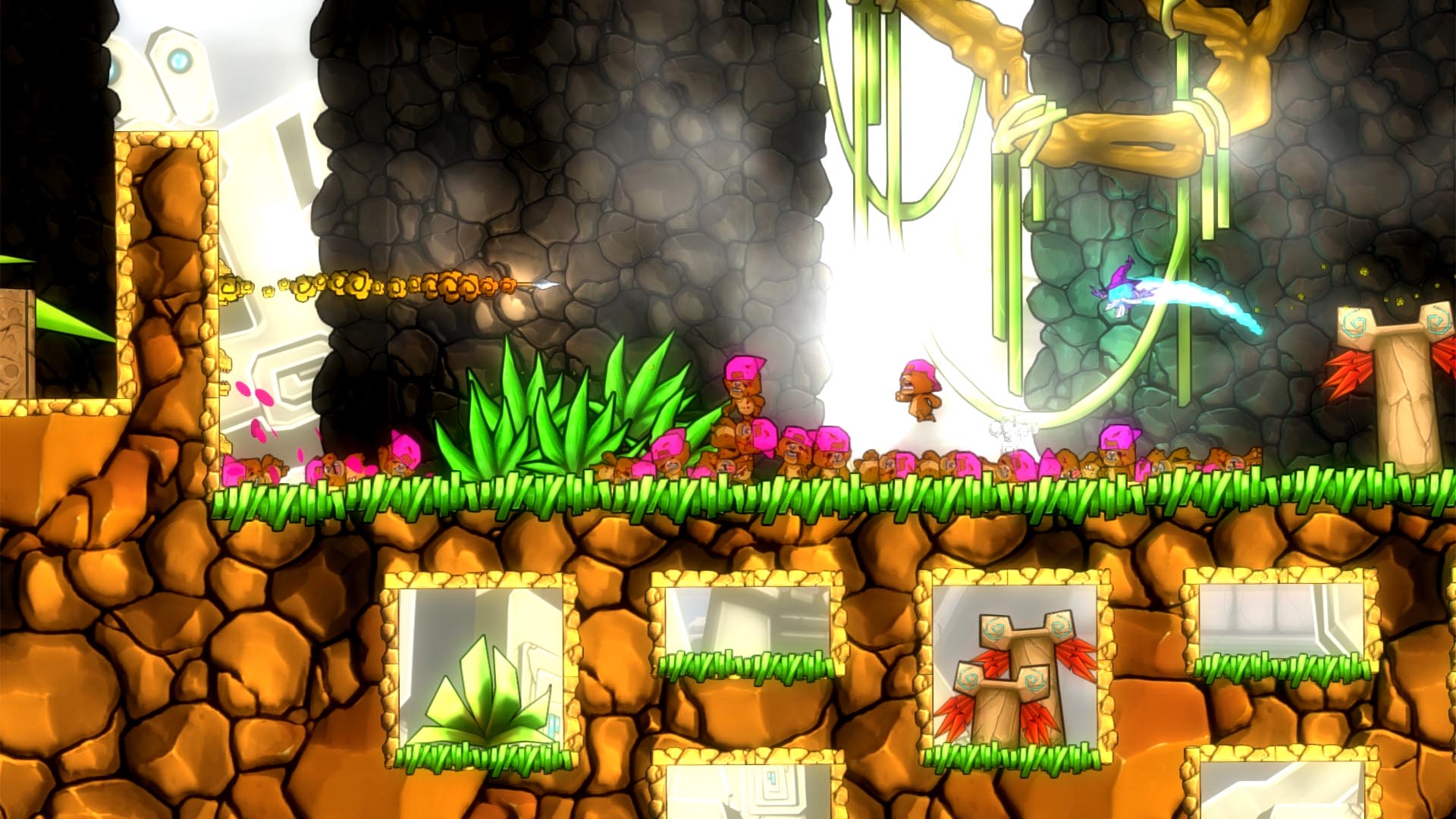 When I sat down to play ‘ Super Rude Bear’ I was cheerfully optimistic. A fast paced platform game with instant kills, quick re-spawns, no combat and glazed with stage hazards, it doesn’t take long to draw a parallel between this and the classic indie smash hit ‘Super Meat Boy’. At first glance it was appealing to the eye and seemed promising from the trailer, unfortunately the experience became monotonous very quickly.

The plot is paper thin yet serviceable. You play the role of ‘Rude Bear’ who is approached by an unusual sphere / bat like creature, who claims that his world is being threatened by a wizard and he needs your help to defeat him. Rude Bear is subsequently sucked through a portal into the game world where the campaign begins.

From a gameplay perspective, if you’ve played Meat Boy then Rude Bear is going to feel pretty familiar, but for the benefit of anyone who hasn’t it’s relatively straightforward. Your character can run, jump and wall jump. You do not have any wider skills, weapons or ability to interact much with the world, however your character is very agile, quick and nimble. Each stage is ultra difficult with many traps including spikes, crushers, saws and lasers which kill your character instantly on contact. To minimise the frustration you respawn instantly and there is no limit to how many times you can try.

The main gimmick of Rude Boy which makes it unique is that whenever you die in a stage, the body of your previous character will remain. Failing several times on the same level will result in corpses piling up all over the place, having a strange effect on the challenge as it actually makes the game easier! Did you get impaled on a spike? Not to worry, as you’ve just effectively created a stepping stone over it for next time. Get shot by a turret? No issue, as there is now a body blocking its line of fire. It’s a novel idea on paper, however in practice I think this gimmick actually ruins the game. 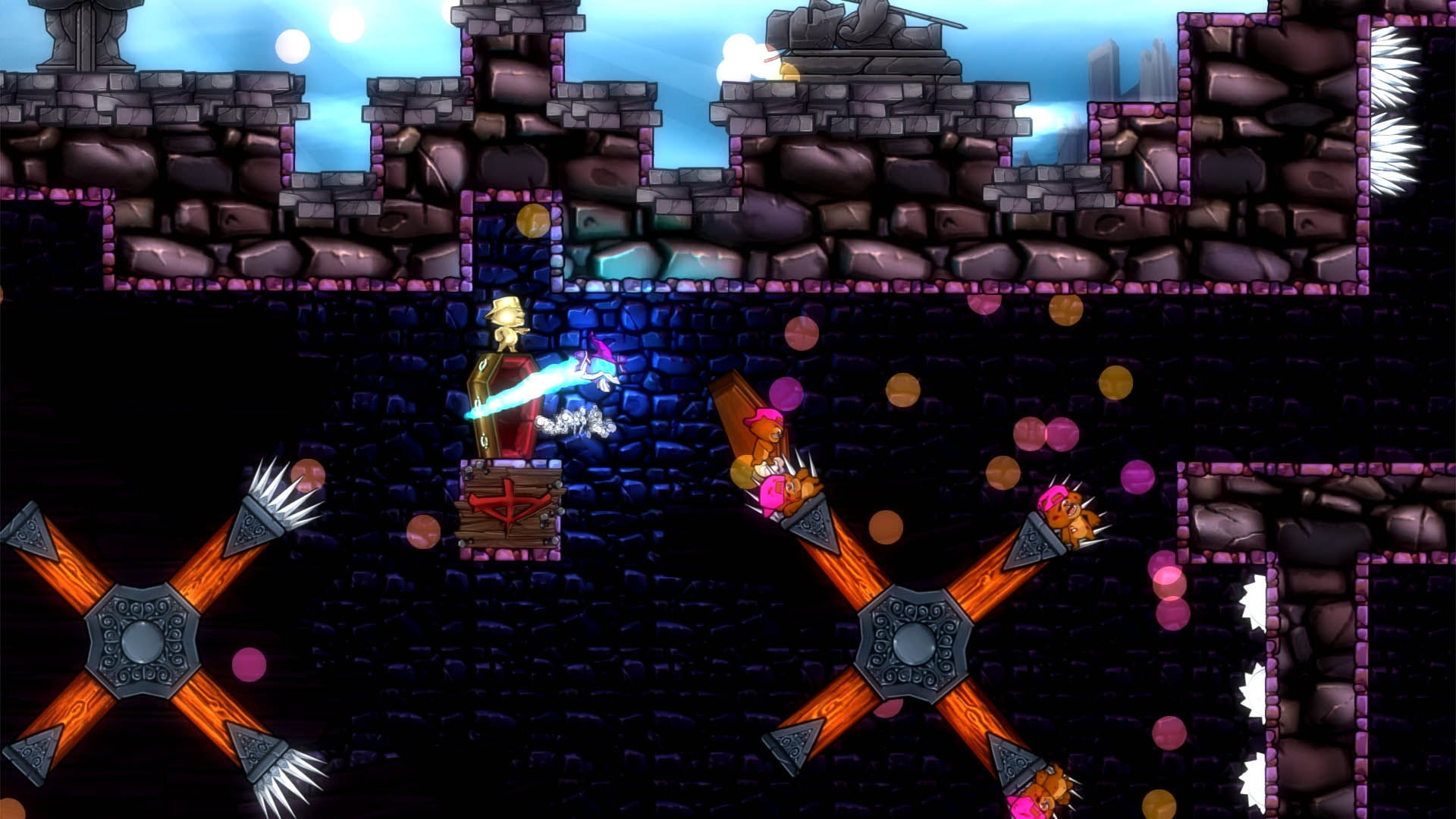 I began playing very carefully, trying to beat each stage while losing as few lives as possible. For the first couple of worlds I was genuinely having a good time. The level design seemed well thought out with some real challenge but nothing majorly taxing. I encountered a few interesting bosses which had small puzzle solving elements in order to beat them, and I raised a smile at the novel stage transitions which parodied many classic games such as Mario, Sonic and Metroid.

However, by the time I was about a quarter of the way through, things just started falling apart. What began with well balanced level design, quickly deteriorated into chaos. Stages became drawn out and stacked to the gills with cheap deaths. Many of the levels were glazed with spikes on almost every surface. In order to flawless these stages you were expected to make it to the exit by jumping multiple times from narrow vertical shafts without being able land on anything for rest bite. I enjoy tough games, do not get me wrong, but there is a line between challenge and cheap.

The reality here is that although it may technically be possible to flawless every stage in the game [citation needed], this is not what is expected of you. You are expected to fail, many times over, and every time you do the stage becomes marginally easier. This for me is Rude Bear’s major flaw. On the one hand, the level of challenge in many of these stages is overpowering to the point where you’re not realistically expected to beat it without dying a lot. On the other hand, any and all challenge is robbed from you as you can potentially pave the level with bodies and create a safe path to the exit. This isn’t a good way to balance a game’s difficulty, in fact it’s kind of lazy.

There is one additional mechanic which I didn’t really use a great deal, and that relates to the bat like creature that accompanies you on your journey. By holding down a trigger button you can actually take control of this creature, fly around to explore the level, and fire lasers which destroy the corpses of your previous attempts. I think the main reason this was implemented (and the only reason I ever ended up using it) is because it is possible for dead bodies to block narrow gaps and paths that you need to pass through. It seems as if this character has been included as a failsafe for whenever the corpse gimmick is counterproductive. 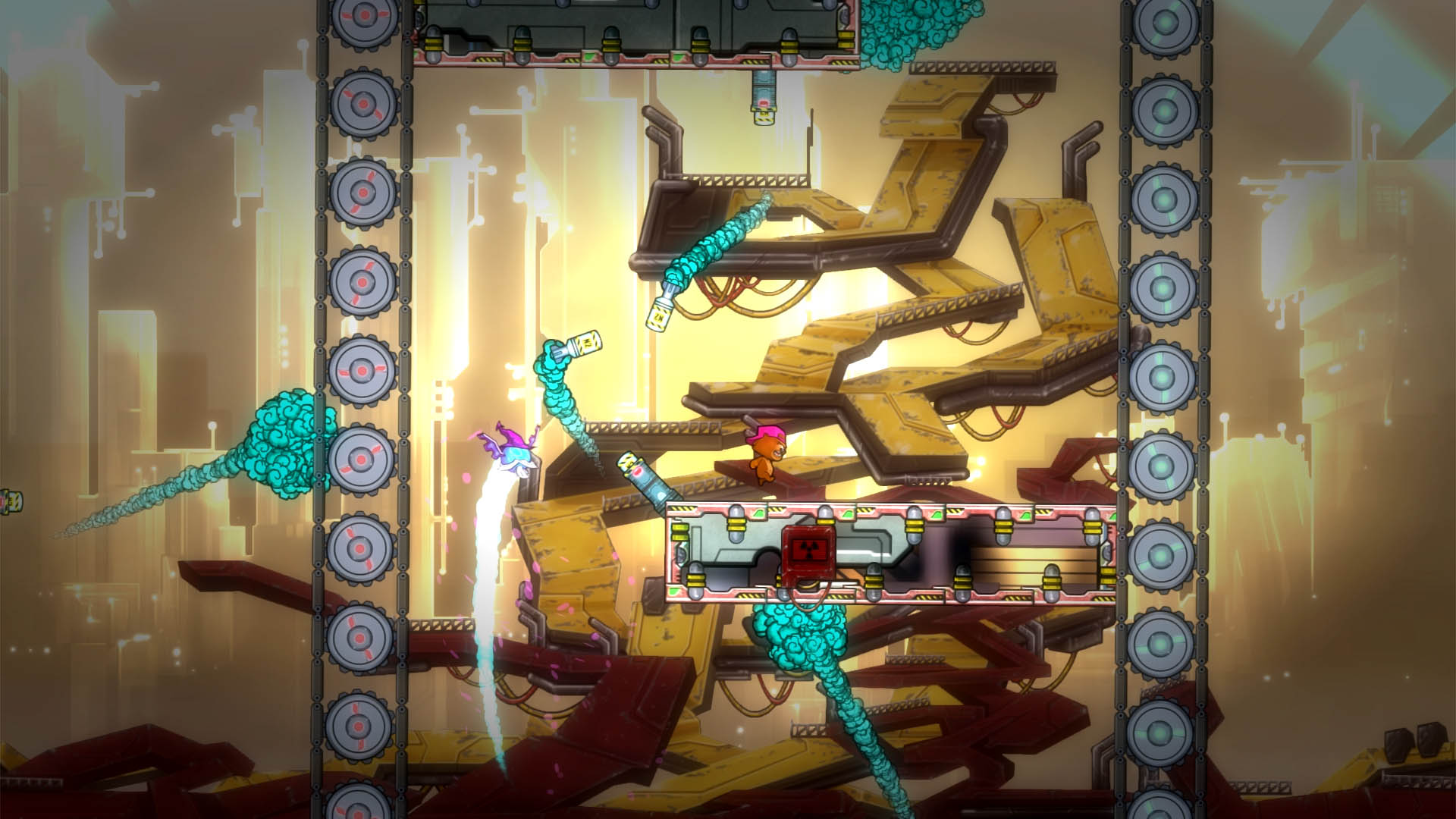 The presentation here is a bit of mixed bag. The graphics are pretty solid. Everything from the character animations, the stage tiles, and the backgrounds have all been digitally illustrated to a fine degree. The overall quality of each element looks consistent across the board and looks like a high end Flash game. Each world has a unique theme such as a factory, an ice cavern, a space station, you get the idea. Although many of these stages look very distinguished, I did feel as if a few of the darker themed areas towards the end began to blend together.

The music on the other hand was not a strong point. Rude Bear boasts a large soundtrack with over 70 pieces of heavy dance / grime music. Maybe this is down to personal taste, but I found this soundtrack to be dementing. I do enjoy some modern electronic music, but I wasn’t impressed with what Rude Bear had to offer.

From start to finish I managed to beat this game in around 4 to 5 hours, however this was mainly through beating the standard stages. There are many secret stages that can be unlocked by finding hidden exits throughout the game, effectively creating alternate paths. If I had any desire to keep playing after beating the final boss I could have gone back to uncover more of these, but by this point I was already pretty bored.

As fundamentally flawed as I think Rude Bear is, one thing I do have to commend it on is the number of usefully options that you can customise for a better, personalised experience. As well as being able to adjust the game’s difficulty, you can personalise specific aspects of the difficulty including how the RNG operates. You can also switch on a speed running timer and turn off game play interrupting sequences such as cut scenes and dialogue. I really like these and wish more games included them.

All in all, I think I enjoyed Rude Bear for about 20 to 30 minutes. It was all downhill from there. The gameplay quickly became tedious. If you enjoy indie console games then the chances are you already own far better games than this one. There were some admirable elements such as the graphics and attention to detail in the options, but you’d be better off saving your money on this occasion.