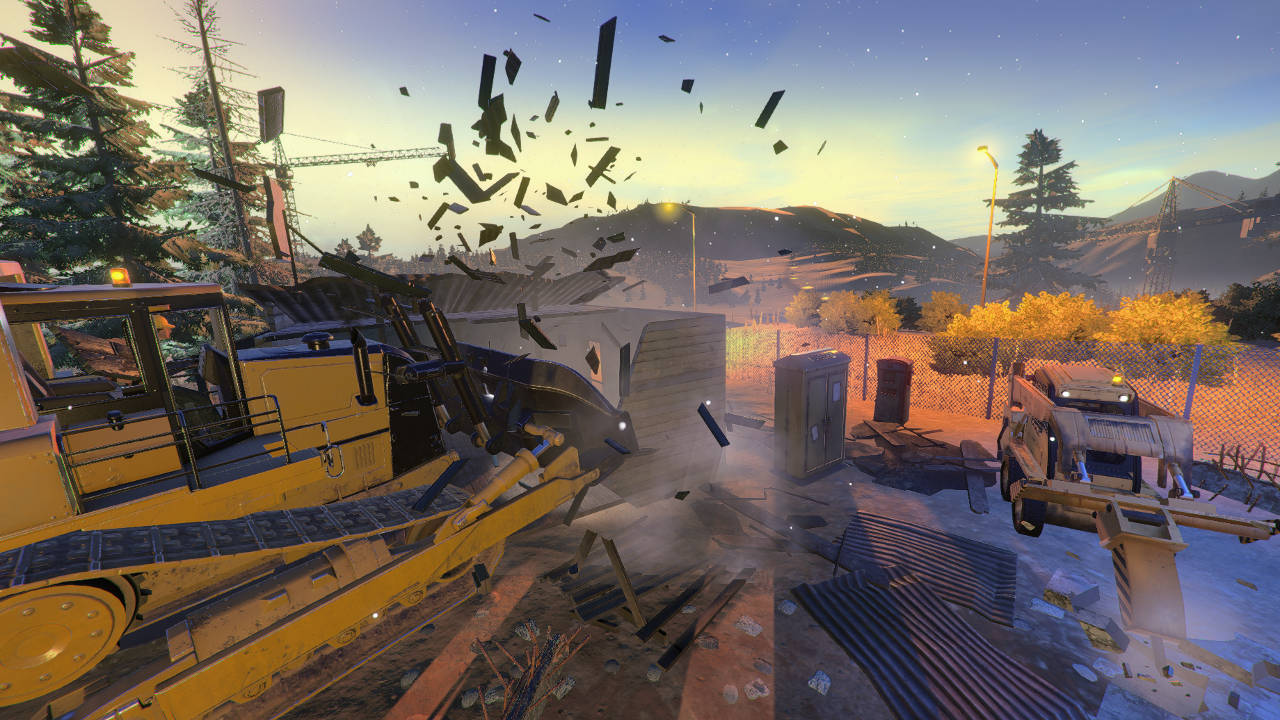 Yes, yes, we all know how many self-titled creatives are out there in the world with unyielding imaginations that create fantastic new worlds in Minecraft. Perhaps creating the ‘perfect’ family in Sims 4 or even an innovative play area in a LittleBigPlanet sandbox makes the cut too. But destruction is where it’s at. It’s so much more easier and satisfying to smash, said the Hulk. In Demolish & Build, it’s precisely that: destruction.

Demolish & Build follows in the footsteps of recent simulation games such as Farming Simulator, but the experience is a little stripped back in terms of realism and presentation. My first impressions weren’t that great. The tutorial features a stereotype construction boss giving you instructions to take apart a casino. His choice of words is a bit fragmented, and upon exploring the area using the controls, it felt quite clunky and resembled a fan-made game seen on the PC in the 90s.

At the start of the game, you can choose a pre-made character. There aren’t any benefits other than appearance, but I found that I couldn’t start the game and would be stuck at the menu system. I juggled the characters in case that made a difference, but the same thing. After rebooting a couple of times and still unable to play, I tried logging in with another one of my accounts, and it started the first time. When I attempted to restart using my main login, the same thing happened. The only thing I can surmise is that there was another user with the same name, but considering that this isn’t an online game and you can’t change your username, nor is there any dialogue to say there’s an error, it appeared to either be a bug or bad design. If I didn’t have another account, I probably would have ditched the game there and then.

There aren’t too many issues controlling your character as navigating the game world is pretty sparse. The areas are open, so when you jump into your trusty pick-up truck, although it is subjectable to damage, it’s highly unlikely that you will crash into anything. In some respects, the driving is a bit like GTA – while you don’t have multiple angles, the feel of driving a vehicle in third-person view with a selection of radio stations seems oh so familiar. 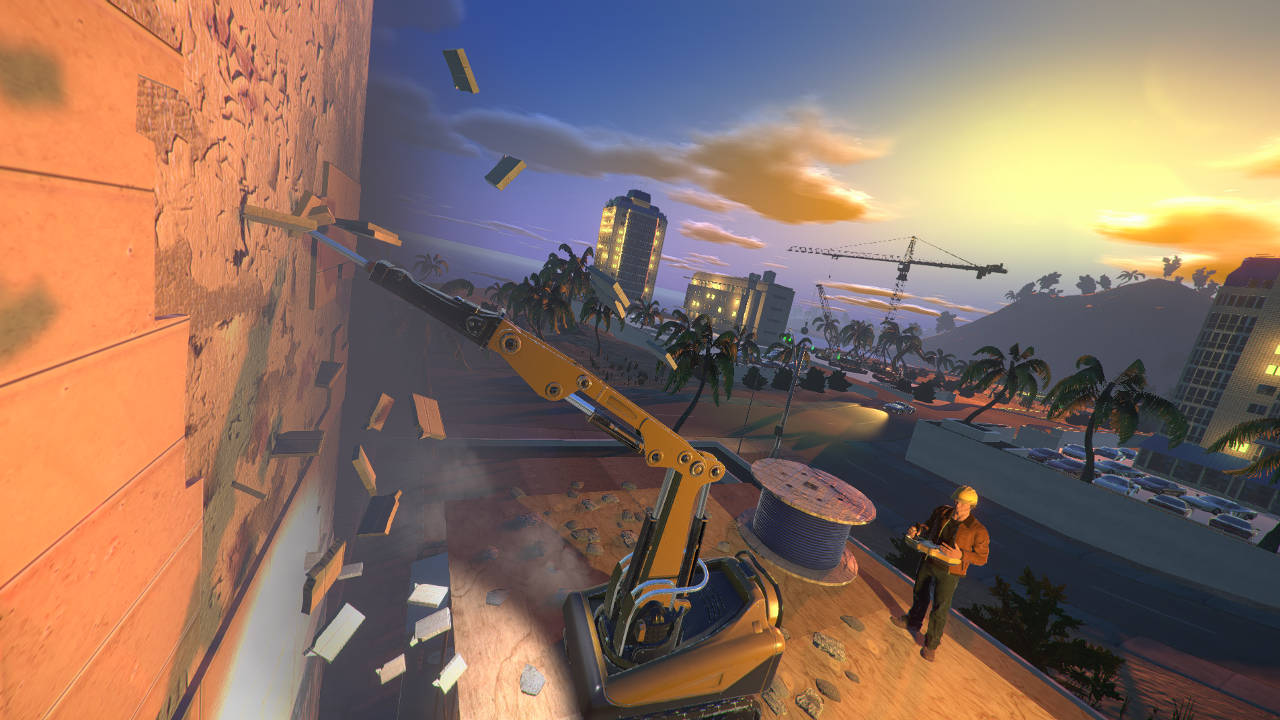 A note on driving: it is essential to use a vehicle to go between points. I tried to walk, and it’s far from the experience you would get in a game like The Witcher 3. There’s nothing to see, and every so often a car would drive past, but that’s it. Getting out of the car is a strange experience too. The default view is first-person, and when you drive, it switches to third-person. Although brief, when you get out of the vehicle, the screen fades out momentarily, and you’re almost teleported out, and it’s slightly disorientating.

Going back to the main objective, you and a fellow worker go it alone and start up your own construction business. You go about this doing smaller jobs and generating an income from clearing a piece of land to renting out parking spaces or knocking down saloons. Other options include scavenging for gold ore and metal scraps to sell on. There isn’t too much to do, but enough to keep out of mischief. Scrap that last comment as you can’t destroy vehicles or random buildings. The most corrupt act I committed was to hold up traffic to the tune of five cars when walking to my next objective.

Each objective has a different task, but the common theme is ripping out materials then pulling down the rest. The sledgehammer is the default tool, and you will use this to bash in tables or destroy ruins. Go to one of the shops, and you can purchase explosives (very cool), saws and more. I didn’t need all of the tools at first, but after a couple of jobs, I bought them all. You only need to purchase them once, except for consumables such as explosives.

There are also several vehicles to purchase. My first was the bulldozer, and to use it, you have to pass a test. Merely drive around an obstacle course and then complete the ‘ability’ the vehicle has, i.e. break down concrete or clear a path of sand, and you’re qualified. Vehicles take a while to unlock as they obviously cost more than tools. The tests are simple but I got stuck on one as I was unable to use the equipment correctly. Tooltips are throughout, but they aren’t always the solution to the problem.

As I mentioned earlier, the visuals are dated. I initially played the majority of the game on handheld, and it was fine, but when docked, it didn’t look great and just put emphasis on the lack of textures and variety. Ignoring the graphics, I have to say that the physics are pretty good. If you hit the bottom of a row of tiles, the others will follow suit. It was massively satisfying to hit a toilet with a sledgehammer. Put that last quote on my gravestone. But, coming back to the simulation and realism side of things, the number of times I stood under a building without being hit by falling debris was a tad annoying. I would like to have seen a health gauge, perhaps as there wasn’t any skill in smashing away at the base of a building without consequence. 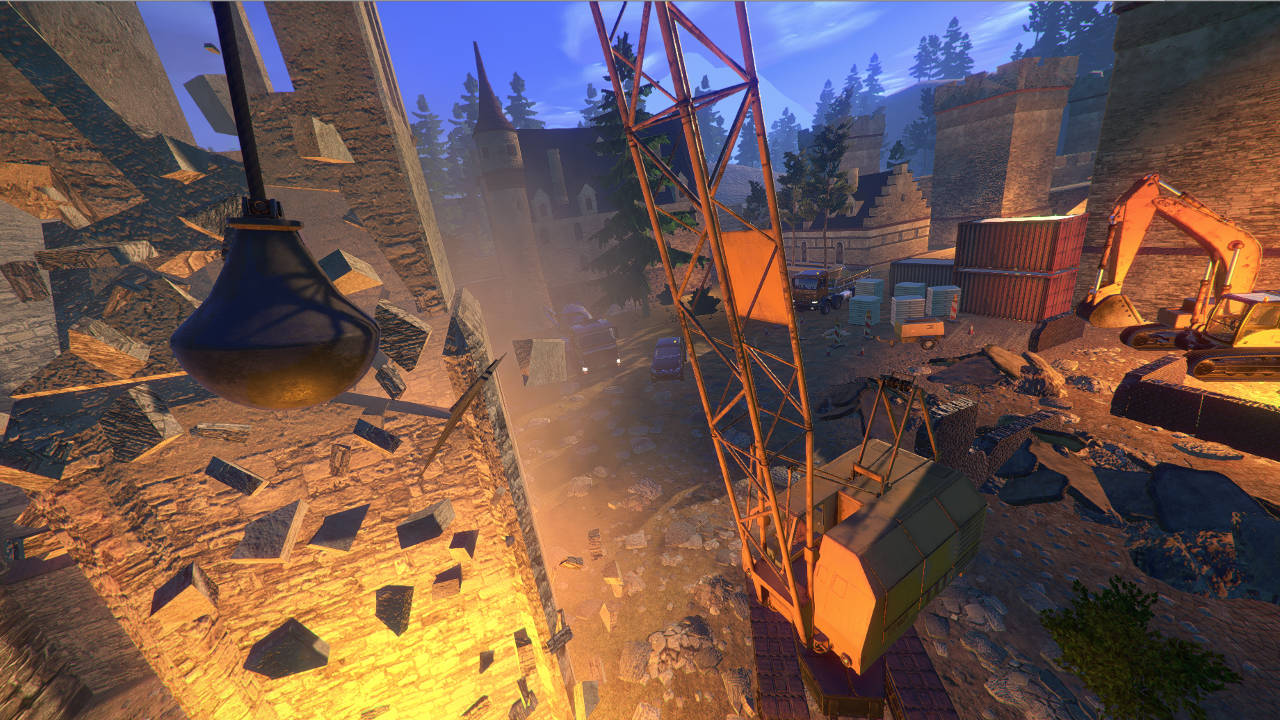 Demolish & Build does feature some pretty enjoyable gameplay elements though. Despite the graphical flaws, I was surprised how much time I invested in the game, watching my business climb the ranks, my various investments, the hiring of employees and even expanding the business with airport travel. The gameplay being the strongest factor is crucial, but considering the other factors let Demolish & Build down a little.

The part I disliked most about the game though was the sound. As touched upon earlier, when in the vehicles you have a few radio stations to choose from with original music that is mostly of a rock or electronica variety. As a fan of both genres, I would usually say I would like this, but they felt a bit out of place in the game – I didn’t want to hear a fast-paced racing type track while I was remotely controlling a demolition robot. But that wasn’t the problem; it was the lack of sound effects, and when they were present, it was the equivalent of white noise.

Not that I want to have it on record, but I like the calming properties of white noise, but not so much when it’s the sound of a car approaching or your bulldozer that has the same tone, and it plays when you aren’t even in the vehicle or worse when it isn’t even there. I switched the radio off, and when I did so, there was silence. There wasn’t any ambient sounds or subtle elements like footsteps. Even when smashing items outdoors, sometimes there was silence, and other times the effects were echoed or sustained.

There’s an element of Demolish & Build that doesn’t quite feel finished. It’s clear which titles have influenced the game, but I think that there were too many gaming mechanics taken on board that added to the deconstruction of the experience. I enjoyed tearing down buildings and clearing spaces, even if it is a little mundane to drop a chair in a container, but overall, it’s not an experience I can broadly recommend.

It’s easier to destroy than to create, and in Demolish & Build, that’s the fundamental objective. As much fun as it is tearing down a site to then build again in your image, the game feels unfinished and lacks finesse. Definitely, a better game when played on mute.

Strangely satisfying to smash a toilet and knock down walls
Ignoring that you can’t get injured from falling debris, the physics are great
A good variety of tools and equipment to change the game up

Not the best visuals and feels a bit empty with a lack of textures
While there’s a good variety of tools, the objectives are a little repetitive
Dreadful sound effects and the music feels a little out of place