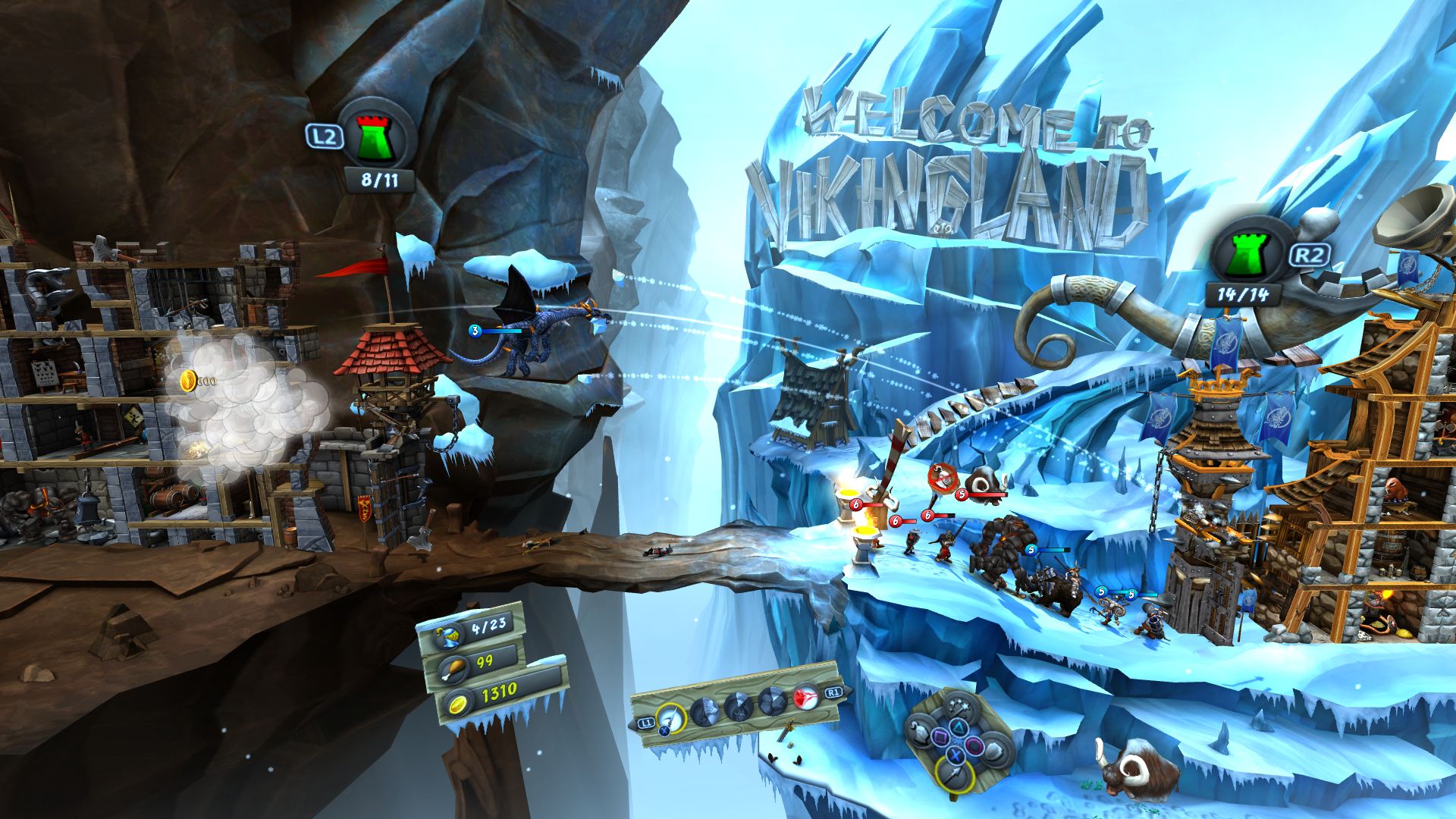 Okay, before we dive into this review I have a confession to make.  CastleStorm is one of those games that seems to have been around for ever and every new platform / console / technology seems to have a Castlestorm title to play on it.  Who the heck likes CastleStorm that much?  Well, I do. Really. I first played this game on the Xbox 360 (remember that?) and subsequently got the Xbox One and PS4 versions.  Yes read that sentence again.  I bought two new versions of the same game. Honestly, and now, with the whole world turning VR crazy, I thought it only right that I got my sweaty mitts on the virtual reality iteration of a game that is – to date – five years old.

And guess what?  I’m glad I did. When the ed told us that CastleStorm VR had come in for review, I must have been grinning and rubbing my hands together like a randy uncle at a family wedding.  Could Zen Studios have made Castlestorm any better than the next gen versions? What would the game look like in VR?  Would it work in VR?  Would it be any good at all? Well, after a week spent ploughing through CastleStorm VR I’m happy to report that all is well in the world and Castlestorm VR is probably the most interesting thing I’ve held in my hands all week ( Hey! – Ed).

Borrowing heavily from the idea that if it ain’t broke, don’t fix it, Zen Studios have left the core game mechanics virtually untouched. Instead their development Sheckles have been spent on producing an eye wateringly gorgeous virtual world to play it in. Jumping out of the confines of a screen,  CastleStorm VR gives the player complete freedom to look around the battlefield while planning a strategy to see off the invading hordes of bearded Vikings.  But we’re getting ahead of us. Let’s back up and explain to anyone who’s just landed on planet Earth what CastleStorm  is.  In a nutshell CastleStorm is a hybrid physics-based tower defence, Angry Birds,  strategy game with elements of resource management thrown into the pot.  The wizards at Zen Studios have often said CastleStorm was inspired by fond childhoold memories of building and smashing up Lego Castles. And every minute spent playing this game reflects that sheer love of fun and childlike abandon.

In CastleStorm VR you get to use a powerful ballista to wipe out invading armies of Vikings and, when things get too tense,  you have the option to create heroes for some boot on the ground hack and slash mayhem.  As you progress through the game you’re able to upgrade your weapons,  your heroes and build your own medieval castle.  The game comes with the usual career mode,  survival challenges,  training sections as well as multiplayer battles and co-op.  As we mentioned earlier,  the formulae in this version of CastleStorm is pretty much the same as early outings.  But what makes this game pop out and grab you by the scruff of your neck is the VR. Wow. CastleStorm VR looks prettier than a prom queen. And with the benefit of VR, you can look around the whole battlefield as well as immerse yourself in the sounds of death and medieval destruction on the battlefield below. As this game is a port from earlier iterations, the cut-scenes are in 2D but Zen have craftily gotten around this by placing you in a ye olde world cinema so you can watch the cut-scenes as though they were playing in a news broadcast.  Genius. 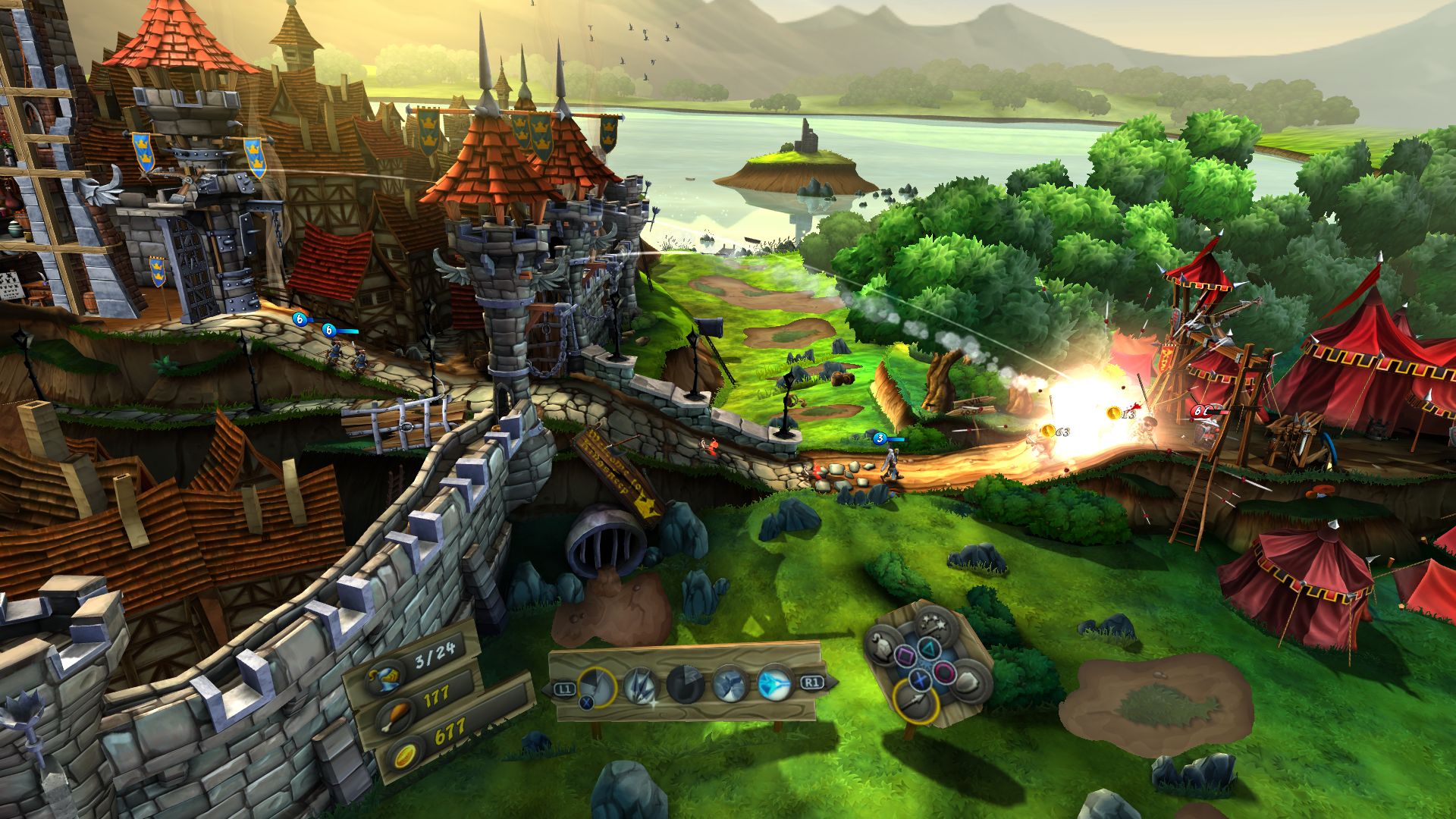 As we said, graphically CastleStorm VR is a visual treat that looks so tasty,  you could get fat just by staring at it. The colours are sharp and vivid, the environments are all unique and wonderfully realised and the cartoon type characters are lovingly drawn.  Soundwise,  the games characteristic battle sounds are all present and accounted for.  And with the benefit of surround sound,  you feel completely immersed in the world Zen Studios have created.  We’ve got to say hands down that CastleStorm VR is probably the best way to experience CastleStorm.

We struggled to find anything wrong with this game that could prevent it from being anything short of a first class title.  If you love CastleStorm as much as we do, then you’re in for a real treat with CastleStorm VR.  If this is your first time sampling the CastleStorm  experience,  there can be no better introduction.  Go buy.

We’ve got to say hands down that CastleStorm VR is probably the best way to experience CastleStorm.  We struggled to find anything wrong with this game that could prevent it from being anything short of a first class title.