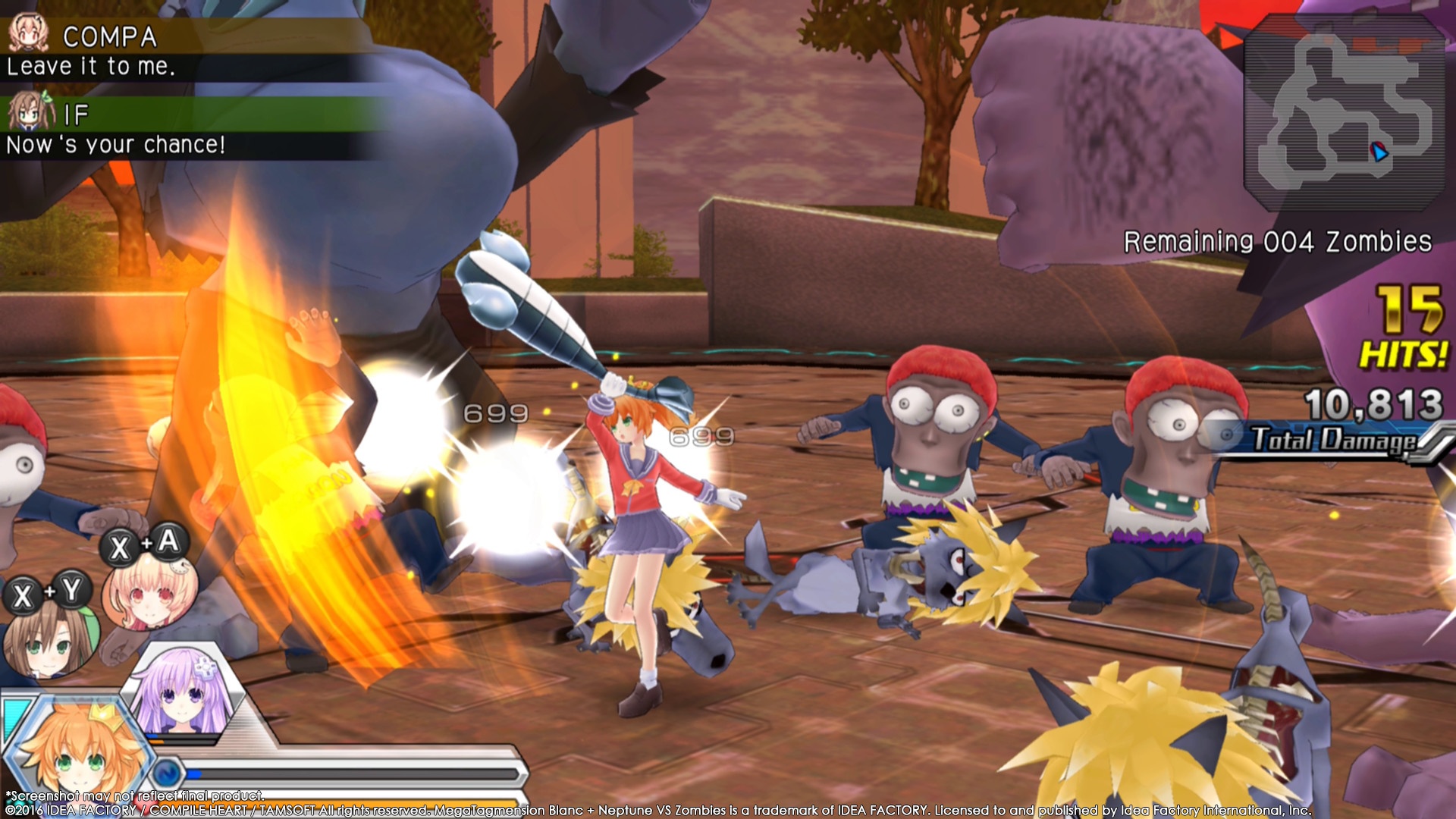 MegaTagmension Blanc + Neptune VS Zombies is the first spin-off of the the Hyperdimension Neptunia series, which up until this title was composed solely by JRPG’s. With that in mind, MegaTagmension came out and changed the core gameplay that this series is known for, while still retaining its characters and everything that attracted player’s attention in this universe.

The game takes place in the world of Gamindustri, but this time around the plot is centered on Gamicademi, a school that is being threatened to close down. In an effort to stop this from happening, a bunch of friends who are part of the school’s unofficial film club, namely the widely known girls from the previous games, decide to take advantage of a mysterious zombie outbreak that started on the school to make a zombie movie that should hopefully bring new students to the academy and save it from closing. At first glance, this sounds like a pretty entertaining plot, especially one set in this universe, filled with references, jokes and puns, and the blatant fan service, but the more I played it the more the whole thing disappointed me.

While the other Neptunia games tend to have their own humour while still trying to retain some sort of serious doomsday scenario, with MegaTagmension Blanc the plot steers away from that by putting the crew filming a zombie movie with schoolgirls during an actual zombie outbreak. Some of the dialogues between characters still remain somewhat serious, but others are quite ridicule, even for a Neptunia game, the characters can’t really convey the sarcasm and the irony of the situations, it all just becomes something rather awkward to witness. Still, the game does make fun of zombie movies tropes and cliches, which can make some of the conversations rather funny. 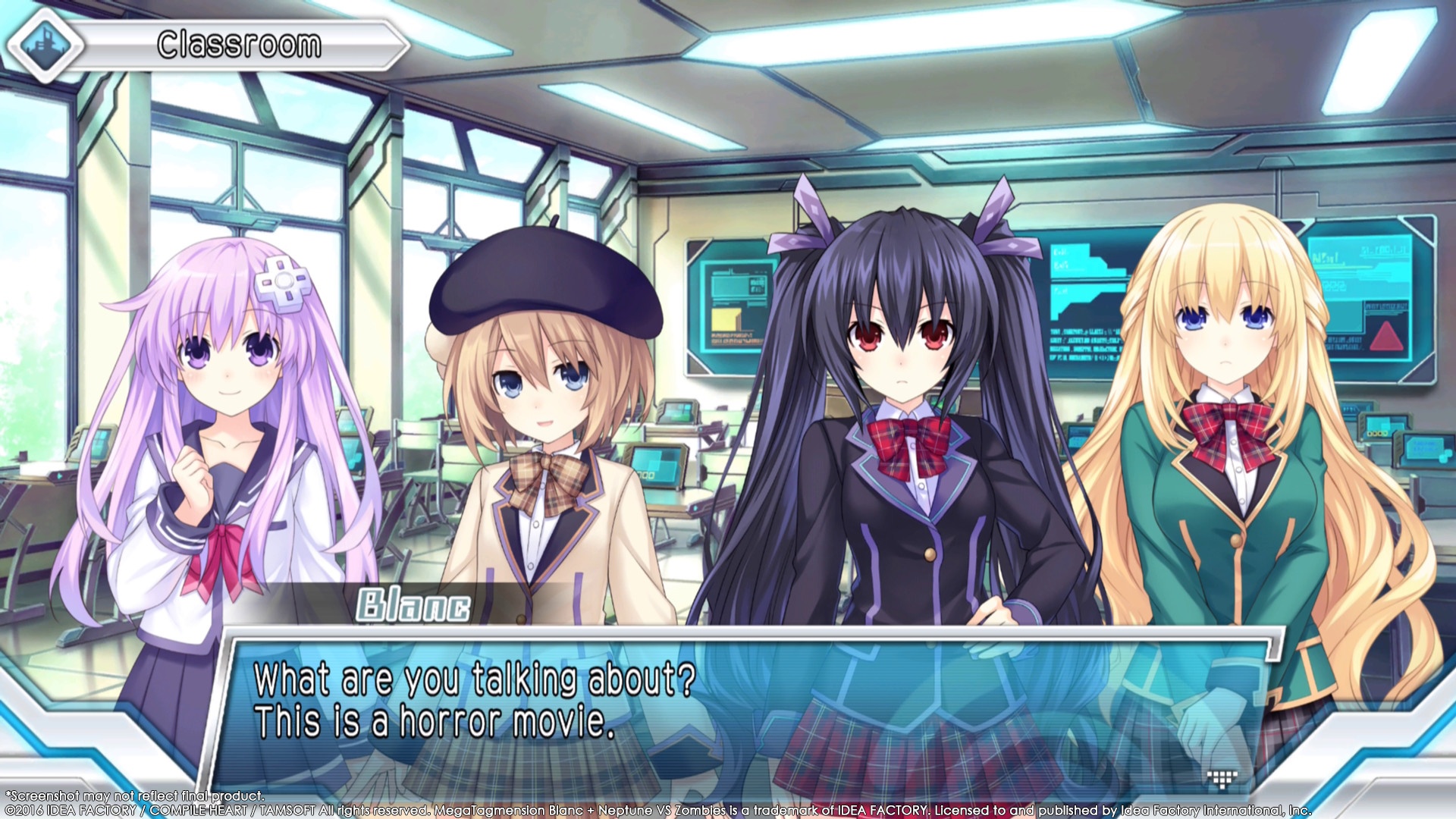 The game is divided into two different gameplay sections, one in which you engage in combat with various enemies during short stages, and another one which is pretty much a visual novel. This is where you’ll spend most of your time with the game, experiencing the story, the characters’ charm and the quirky humour that is present throughout the dialogues.

Each combat stage represents a scene in the movie, and it has some dialogue to go along with it, before or after. In order to complete each stage, you have to eliminate a certain number of zombies in hack and slash fashion by using up to 2 of the various characters available to you, but the game is plagued by some jarring issues during these segments. For instance, camera handling is really weird and somewhat hard to control if you don’t lock it to an enemy, hitboxes also feel extremely off, with enemies often hitting you while you’re in the air and they’re at the ground level. In the same way, some of the characters also feel extremely slow when attacking despite the amount of the damage that they deal, which kind of renders them less desirable to play with.

There were also situations where the game says that there are still enemies remaining but it doesn’t show you where they are on the minimap, which forces you to walk around the arena looking for them, which gets pretty tedious. There’s also no way for you to know how far you are from killing an enemy, as there are no health bars, nor any visual cues that you can look for on their appearance that tell you how much damage you’ve dealt. Likewise, while there are different types of enemies, they pretty much behave in the same way, usually just rushing towards you and bumping into you in order to deal damage. 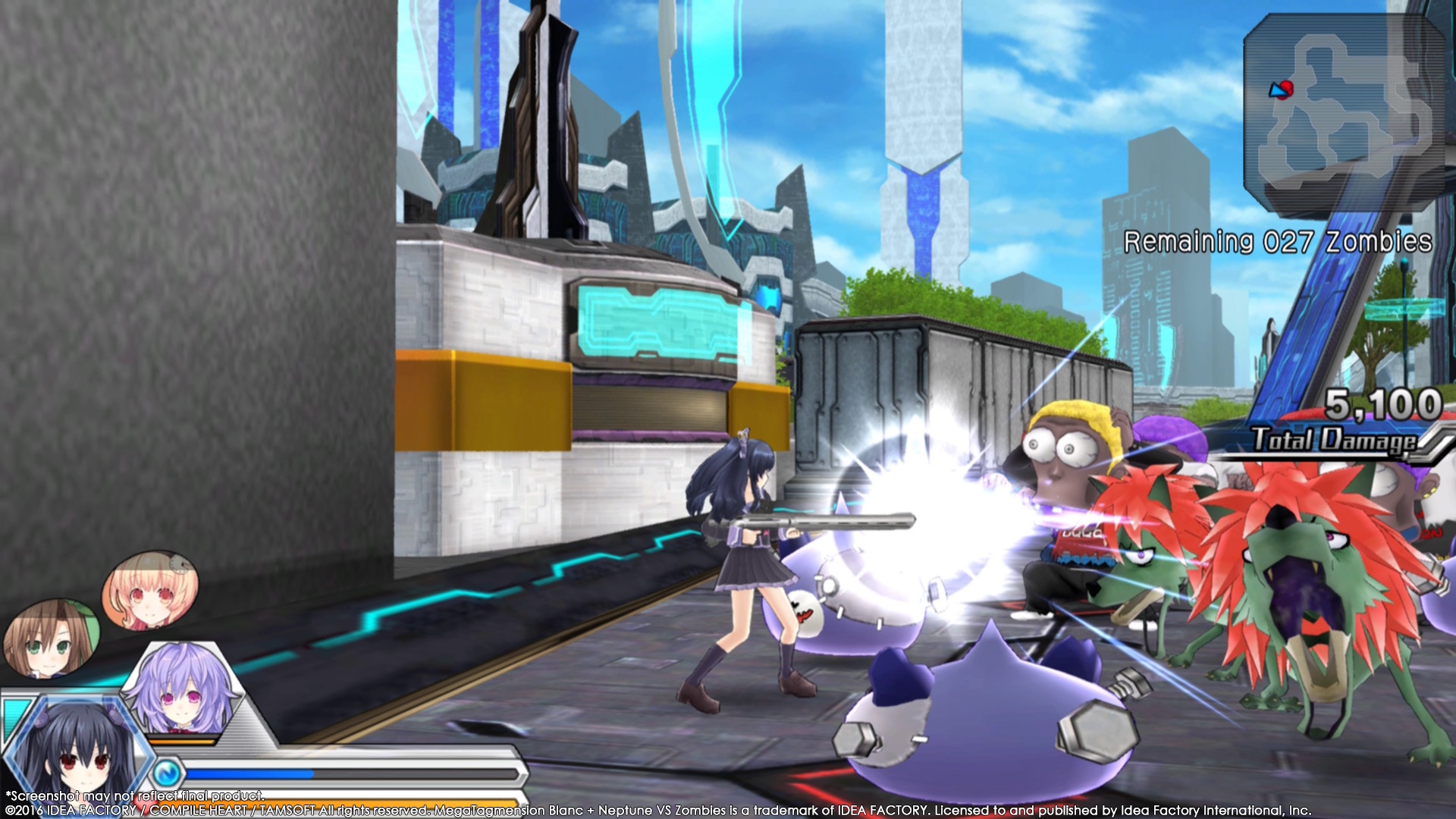 As far as the actual combat goes, it does a decent job at staying somewhat fresh with all the abilities that you can unlock and gear that you can equip, especially if you consider that this is the team’s first game with this type of combat. In any case, instead of slowly teaching you the basics of the combat, the game throws at you a few screenshots full of different attack combinations, actions and abilities right before the first fight, which I found to be a bit overwhelming. The game does show some tips during the loading screens, but the game loads so fast that I couldn’t even read them, which makes me ask, why isn’t there a button to confirm the loading sequence once it is complete?

Something that still should be noted even though if it’s somewhat relevant nowadays, unless you have someone to join along for the ride, is the fact that the game has online co-op, which essentially puts you alongside 3 other players completing missions in exchange for certain drops and credits that you can use to improve your characters. Still, the online scene is pretty much dead now and the chances of you finding a lobby are pretty slim.

While with the other Neptunia games one can safely say that the games strikeout an even balance between the visual novel segments and the RPG side of things, in this case, that’s not the truth. With MegaTagmension Blanc the combat side of the game almost feels like a proof of concept of what had the potential to be a lot more and carry out the narrative of the game forward. With that in mind, I can’t really recommend this game. It’s not that it is a bad game, it’s more that it’s just not good enough to warrant a purchase unless you’re a hardcore fan of the series and the story might be something that you could enjoy nonetheless.