Home
/
PC
PC Reviews
Is It Wrong to Try to Pick Up Girls in a Dungeon? Familia Myth Infinite Combate Review
Share Review 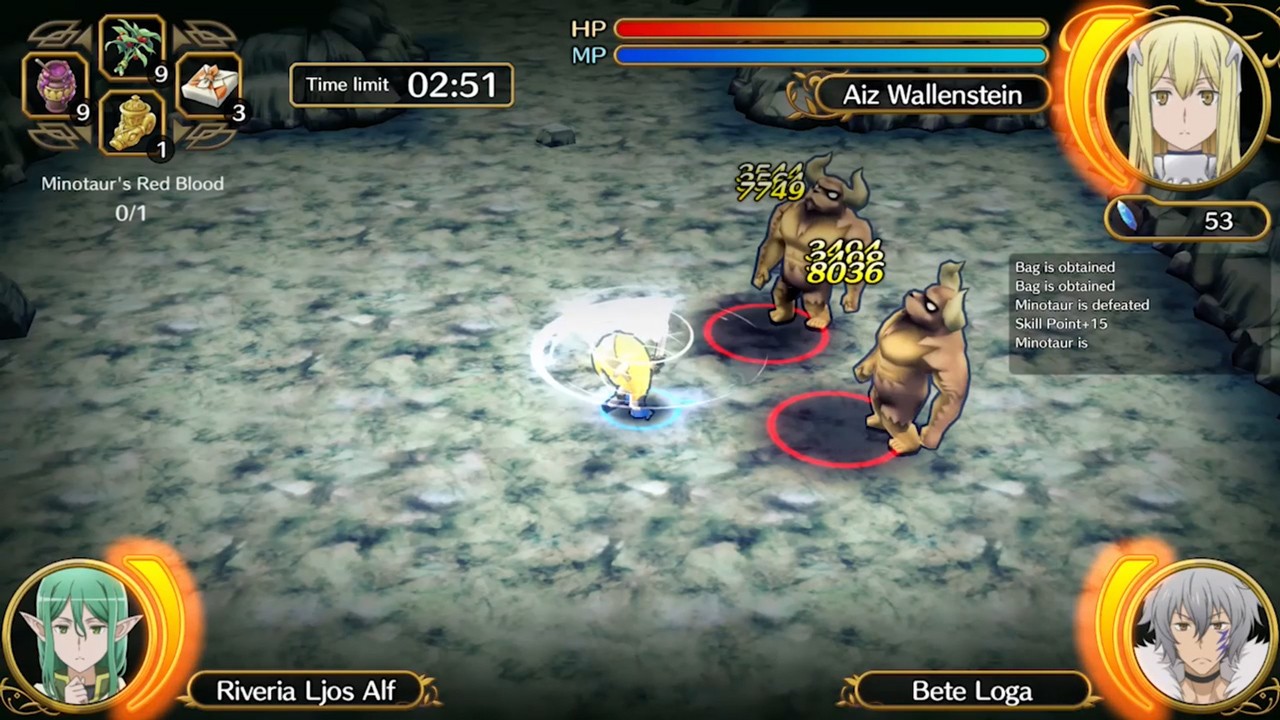 I’ll type the name of this game approximately once in this article, and that will be the end of it. While I appreciate anime based games taking on the names of their source no matter how ridiculous, there needs to be a line. If I typed out the full title every single time, I would have a three thousand word review about nothing, and there isn’t an acronym in the world that wouldn’t look like garbled alphabet soup. Ironically, if you’re here, either you really want to know about the game, you know the anime and want to know the game or you’ve gotten hopelessly lost due to an error in SEO magic.

What players need to know is that PQube did their absolute best to ride the line of quality and quantity in the world of this game. If you’ve ever heard of the anime, then you know approximately what you’re in for in terms of storyline. Is It Wrong to Try and Pick Up Girls in A Dungeon? Familia Myth Infinite Combate puts you in a world where the gods and goddesses have become utterly bored with their easy, infinite lives. In order to spice things up, they’ve created tangible forms in the mortal world to better interact with their worshippers. Devouts and zealots alike become adventurers to win victories and acclaim for their hosts, and some gods are more comfortable with a smaller number of worshippers than others. Hestia, one patron goddess, is thrilled to have the sole worship of Bell Cranel, a solo adventurer who is a charming young man but not really spectacular. You split the game time between being in Bell’s shoes and also those of Aiz Wallenstein, a renown adventurer who Bell used to be in love with and, surprise, might still be. Oh, and, by the way, everyone in the world who is female (both mortal and immortal) will fall for Bell, and hit on him relentlessly. Which you knew, because look at that long ass title and think about it.

Is it Wrong etc. plays out in equal parts adventure dungeon crawlers and anime visual novel, with the latter being more interactive and honestly a bit subpar for what I was expecting. Only about half the dialogue is voiced, and quite a bit of it is just bookended by character outbursts of “Hai!” or “Eh?” and then you read the rest of whatever is going on. The plot closely follows what happens in both the anime and the light novels, so there’s no reason to reread it for either fans of the previous media incarnations or to spoil it for newcomers. After a bit, it introduces some different angles and concepts, and some new story branches, but it’s not quite as radical as you might expect. It’s certainly not on the level of Kill La Kill, but also not as by-the-book as the Attack on Titans games. It’s somewhere in between, and it just doesn’t have as much umph as other anime games. Art is great, the clips of voices are fine, and the small pieces of animation are quality, but it’s not even remotely as indulgent as some other anime based games. 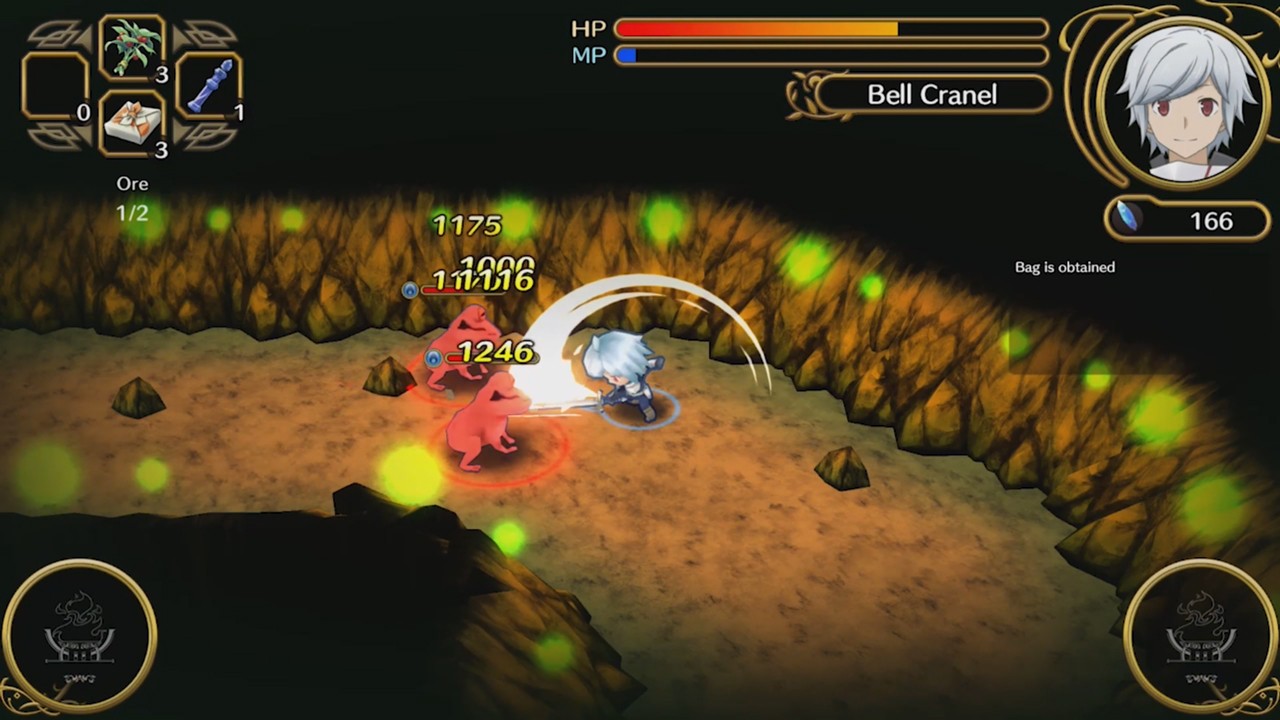 The other half of the game – the half that focuses more on gameplay and not on the anime – is actually pretty decent and digs hard into the dungeon crawling aspect with plenty of RPG customization and skill leveling between quests. Is it Wrong to Write Long Titles provides a lot for players who are looking to either advance the plot purely or to get the most out of the game grind. You get turned loose in a semi-procedurally generated dungeon with a quest parameter set forward, such as killing a certain number of beasts, getting some kind of items, reaching a level point or, naturally, dealing with a boss monster. Your character (either Bell or Aiz) is assisted by up to two additional party members, though these members don’t appear physically in the dungeon. Rather, they provide passive bonuses to our heroes and also allow for room-affecting skills that gradually charge over the course of the dungeon run. Your hero, to their credit, has the option of doing light or heavy melee attacks, casting spells (when they learn them), and doing their own charge-bar attack that can do some serious damage.

I simply loved the entire setup for dungeon crawling within Is it Wrong. Not only are there a smorgasbord of sidequests between the “story” chapters, there’s also a ton of incentive to continue diving in and grinding out more and more kills, more and more items. You can purchase and upgrade all types of weapons and equipment, overpowering and becoming just stupidly strong before even stepping foot into the first real “boss” area. The combat is active, not turn based, so it’s got more teeth than the Mystery Dungeon series (which is the most recent dungeon game I played). You can fine tune the heroes through the skill tree in order to shape out how you want to approach combat: I prefer melee to range any day of the week, so I tried to avoid magical combat when I could. Of course, there’s a decent variety of monsters (some anime based, some garden variety beasties) that will require you to do more than just hack-n-slash, so you can’t totally dismiss all the magical path. 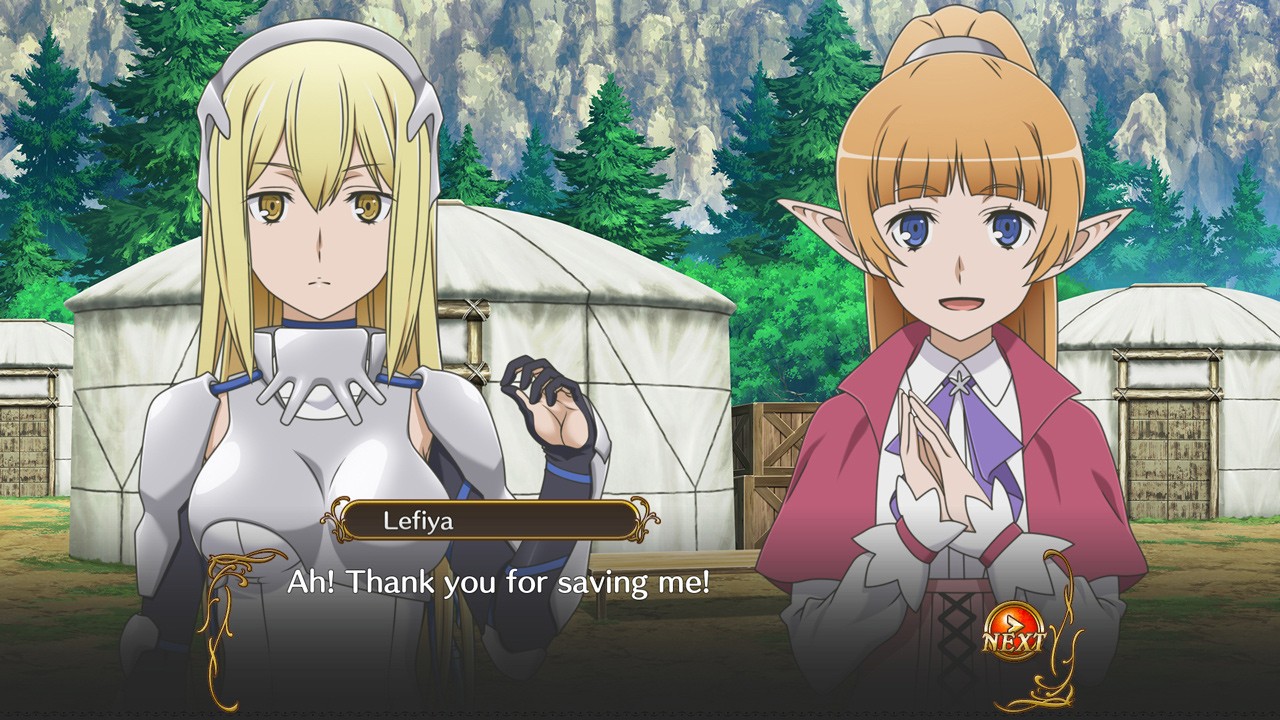 Naturally, there’s the relationship aspects of the game, which, despite the ecchi nature of the title, are very tame in comparison. Sure, everyone female ends up flirting and making innuendos with Bell (who is usually either unawares or blissfully embarrassed about the whole thing), and there’s some rather large chested characters with strategically tattered or low cut clothing, but it’s nothing we haven’t seen before, and certainly nothing I thought was over the top. Granted, a lot of it doesn’t even become apparent until you get to the “Extra” mode of the game, which occurs after you’ve beaten the “real” game. This is where things get weird: you can do quests to unlock Date points, and make connections between characters (both for Bell and Aiz) to unlock more scenes, like hot spring visits, thoughtful shower contemplation and other eyebrow raisers.

This becomes a point of contention for me, because it feels like putting the cart before the horse. The only way that you’ll get to do the fan service side of this game is to bust through the story mode, but the fans already know the story front and back and it’s not terrifically long (about 12 hours), but that’s still 12 hours of gameplay. As an anime game (and one with the Mages name on it), this isn’t a cheap title either, and there’s something inherently cruddy in the sensation of grinding out a game you already know in order to see what you don’t. If you haven’t seen the anime before, then maybe it’ll be engaging enough to keep you going, but that’s a wild tossup. I like dungeon crawling and equipment grinding, but is everyone going to feel that way just to get to some extra story excitement? This will be a tough call, and I wonder if the anime fans out there will be willing to put it all into this game just to see what comes next.

Still, when all is said and done, Is it Wrong to Try and Pick Up Girls in A Dungeon? Familia Myth Infinite Combate (dammit, I did it twice) is a very functional and satisfying combat dungeon grinder. It performs quite well on the Switch which doesn’t seem to be the case for the Steam folks (sorry, PC dudes), and I got the impression that there’s plenty here to unlock all the routes, doing all the sidequests and really maxing out the character traits It’s true to the anime, though production value could have been higher. It’s certainly not the best anime game of all time, but it’s better than it could have been, and that’s certainly something.

Is It Wrong to Try to Pick Up Girls in a Dungeon? Familia Myth Infinite Combate Review