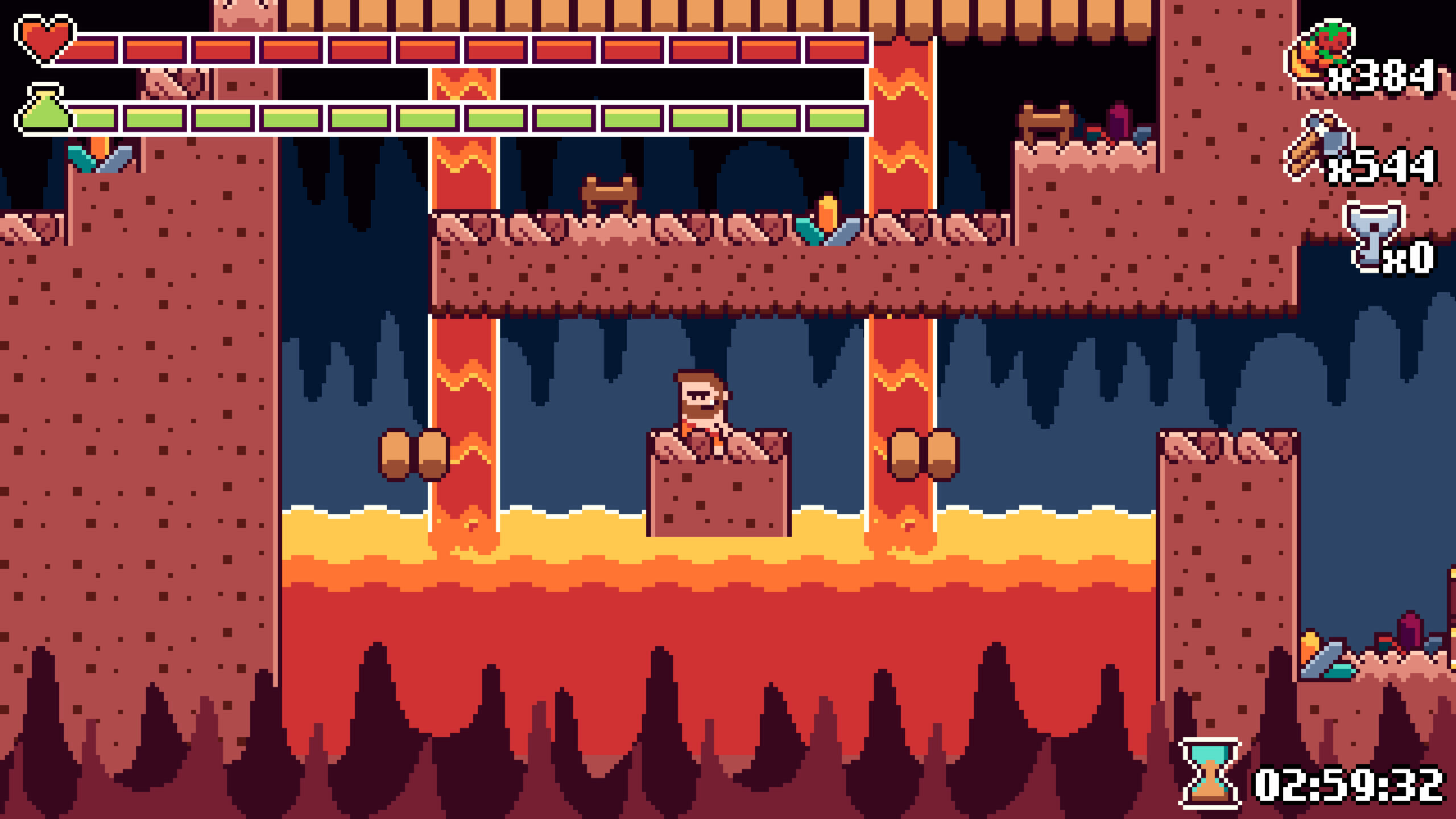 We’ve all read tales from history books and seen documentaries about prehistoric man. His fight for survival, hunting wild animals, and slowly evolving. Using the surrounding items to help him to overcome obstacles and increasing his awareness and intelligence. Now if you’ve heard about all of that, then you must know about his love of ham on the bone? No? Well, me neither! But Prehistoric Dude has been brought to you by lightUP, and published by Ratalaika Games to tell this tale.

The story opens with a cutscene of our hero “Dude”, showing us his love of ham. He proudly holds it aloft, forgetting that prehistoric time, or just the present for Dude, is full of dangers. The main one being monstrously big dinosaurs. A Dino somehow creeps up on our protagonist and steals his prize possession. No one takes ham from Dude, and this is where the action begins.

This is a retro Metroidvanian game where Dude must explore 3 different scenarios of the stone age while hunting for his elusive dinner. There are many alternative paths to explore, some will lead to dead ends, and some will be blocked by obstacles or unreachable platforms. Special items, vines, switches, and pressure plates must be used and activated to overcome these obstacles. You start out with nothing, except for some axes to defend yourself with, and a pair of animal print pants. As you venture you will find up to 7 special items, these will help you; cling to rocks, push boulders, fight enemies, swim under water, and more.

As you venture further you will find locked doors and gates that require a silver key to unlock. These are limited and hard to find. So keep your eyes peeled as they can be anywhere and usually require you to solve a puzzle so you can get to them. As well as the keys, you will find chests en route. These contain valuable resources and are worth the effort and time to get them. 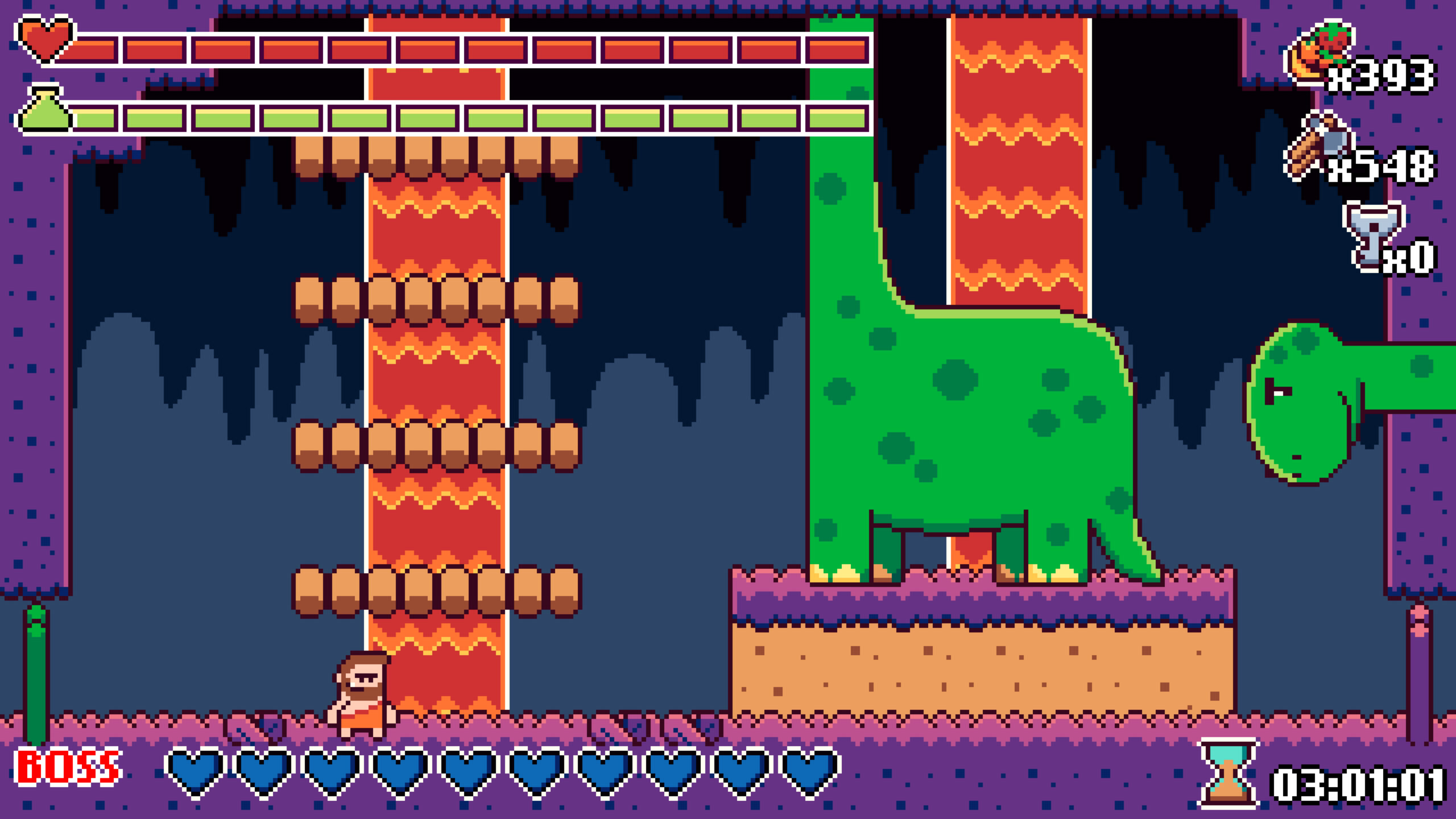 As a big burly caveman, you’d expect Dude to be hard as nails. In reality, he’s as fit and frail as an old man. He begins with 2 bars of health and stamina. Trust me when I say these go very quickly. You have the option to run and this depletes your stamina bar. It recovers slowly as you rest, or walk around. I personally never ran as it did nothing. He didn’t go faster, nor did he jump further. If you get hit, and you will, I suggest that you run through the bushes as; fruit, cakes and drumsticks will magically appear. These will heal you and allow you to continue your adventure. I know what you are thinking, “I want Dude to be fit and strong, not weak. Can he level up, or boost his stats?” no levelling is available, but you find elixirs that permanently increase either of your stats. He doesn’t become superhuman, be he does get much stronger.

Remember those locked doors and silver keys I mentioned? (If not, it’s a couple of paragraphs back. I’ll wait for you to refresh your memory…) They block the path to the game’s bosses. You enter their lair and work out how to defeat them. This usually involves a simple; run, dodge, and jump. The boss will take damage and you rinse and repeat this until it dies. It’s easy stuff, but if you die, have no fear. You respawn at the beginning of each section with all your health intact. So, replan your strategy and try again.

There isn’t much to say about the graphical presentation. If you’ve played any indie games of late, then you’ll be familiar with the retro look, and the colourful palette. Prehistoric Dude has a nice 8-Bit style, the sprites are nicely drawn, and the world is well designed. The vivid colours make it interesting to look at, and each of the 3 scenarios has a unique look. 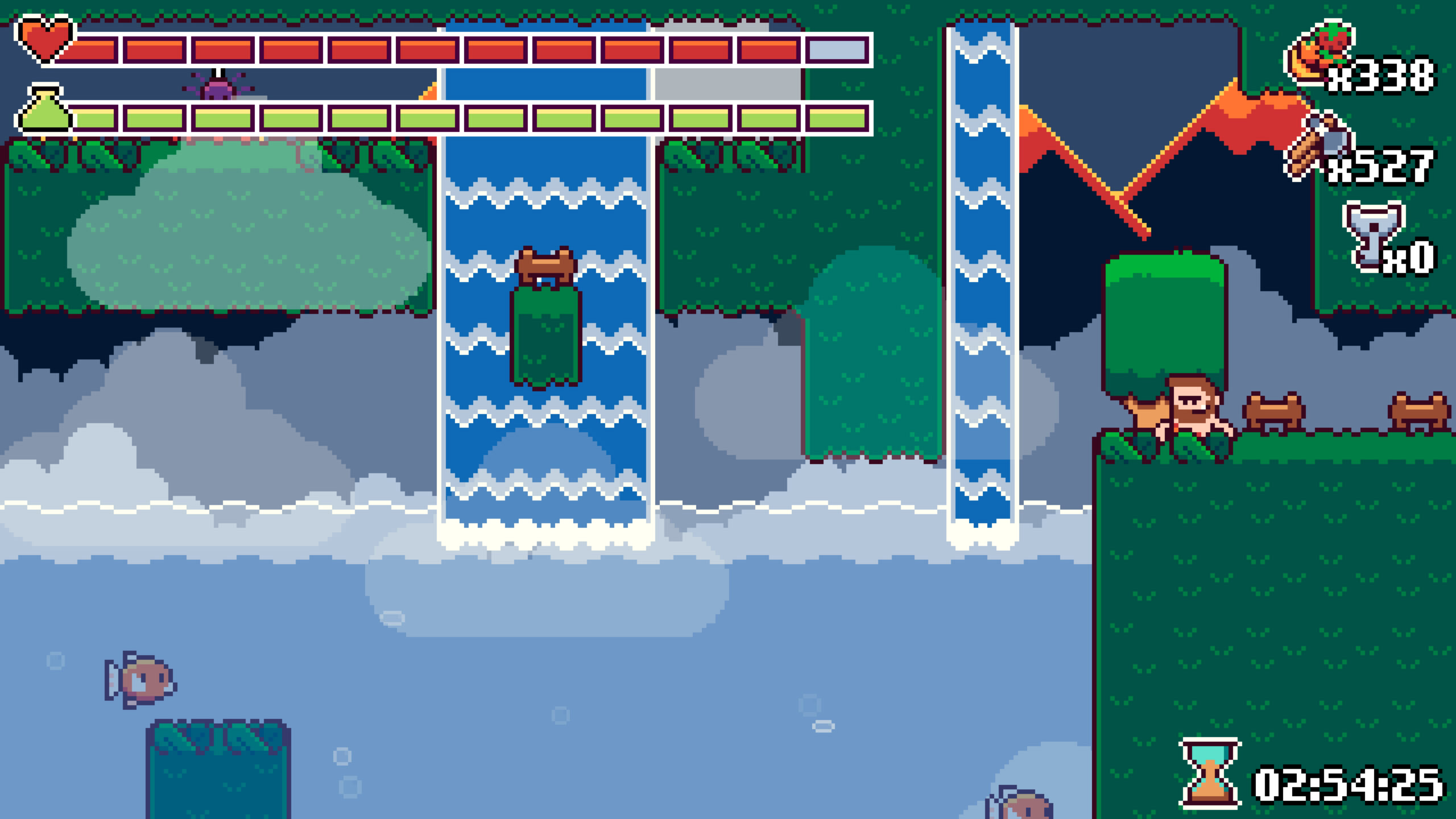 LightUP has used a fun and lighthearted chiptune music to support the action. It has jazzy undertones. It wasn’t annoying like some indie titles, and helped to convey Dude’s personality as a fun loving stone age man. The sound effects are as you expect for a game in this genre, and there isn’t much to make it stand out from the crowd. Both the music and the sound effects were at an acceptable level for a game of this standard.

I had a bit of a love hate relationship with the controls. They were simple enough to master, after all, it was just move, jump and action. What I didn’t like was how Dude gripped onto surfaces. He would hit a wall and slide off. Sometimes he would hold on, and then there were moments he would grab the smallest of ledges. It was a bit of a mess and I never knew if I would fall to my death, or hold on like Spiderman.

Metroidvanian games are renowned for being difficult and having quite a good replay value because of the challenges it presents. Unfortunately, this one doesn’t! Once you’ve collected all 7 items, defeated the bosses, and reclaimed your ham, there isn’t much to do. The game can’t even fall back on the achievements to bolster up its replay value, as these are earned en route to finishing, and are easy to unlock.

Though it lacks replay value, the first playthrough is worth the effort. It’s a colourful and basic platforming experience that lacks some finesse that others in the genre have. But for all its shortcomings, you will find a fun, albeit short and easy Metroidvanian game to play. Do I recommend it? I’m a bit on the fence, but yes, I do. It’s not overly expensive, and with a unique look at the stone age, it will be worth adding to your game library. Take control of Dude, leap onto the platforms, solve the puzzles, and get back your ham. It’s all in a day’s work for a prehistoric man.

A short but sweet look at one ham loving friendly caveman. Dude must find special items to overcome obstacles, and recover his lunch.