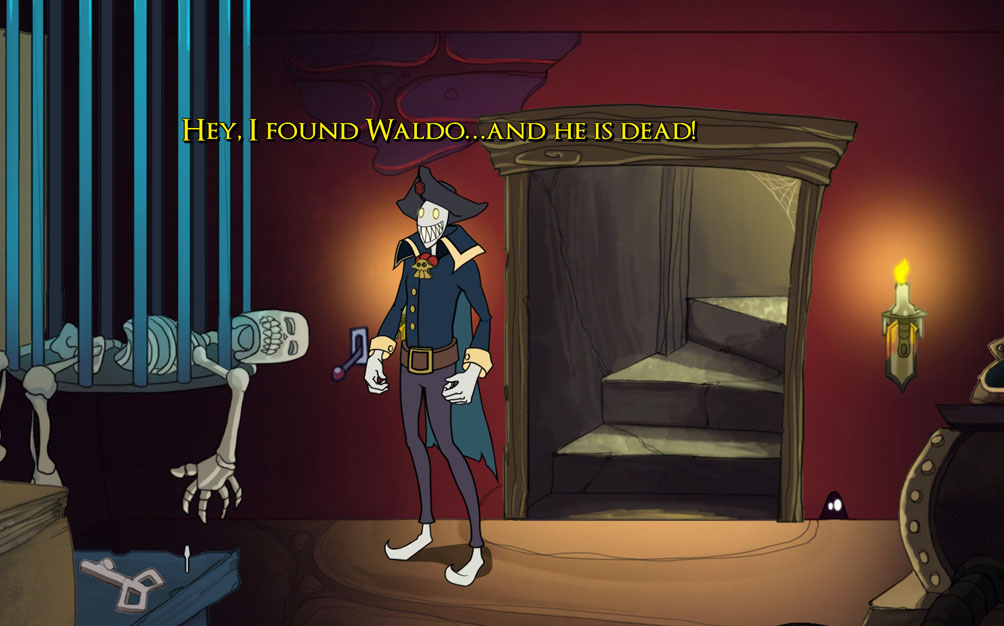 Darkestville Castle is a Point-&-Click style Adventure title from Epic Llama that released on September 21st, 2017. It features a Villain as the main protagonist, plenty of nefarious plotting and dark humor, plus a Retro-inspired dynamic that feels like ‘90s era titles. The main character is Cid, the resident demon of Darkestville, and it focuses on Cid’s pranks, dastardly deeds, and ulterior motives. That is, of course, until a new foe sweeps into town. But does the sinister humor and shenanigans stack up against a wealth of other Point-&-Click titles?

The premise of Darkestville Castle is half the fun: Cid, who has enjoyed being the resident Evil Doer in the small, rural town, finds himself in a peculiar situation. First, another resident hires some demon slayers to come and dispose of him. Then – and I don’t want to give much of the plot away – a new enemy surfaces, one that will challenge all of Cid’s ingenuity and determination. There’s a Tim Burton-esque style to the artwork and environment, from the weird, spooky but cooky decorations to Cid’s ghastly appearance. I was immediately impressed by the smoothness of the controls, and the right-left-center way of negotiating interaction options. The inventory system is simplistic but crisp and responsive, and I didn’t encounter any troubles with the drag-to-combine method of the object on object interactions. The puzzles are object-focused, as is the case with most Point-&-Click Adventures, and I found them to be just challenging enough without delving into the realm of frustrating. 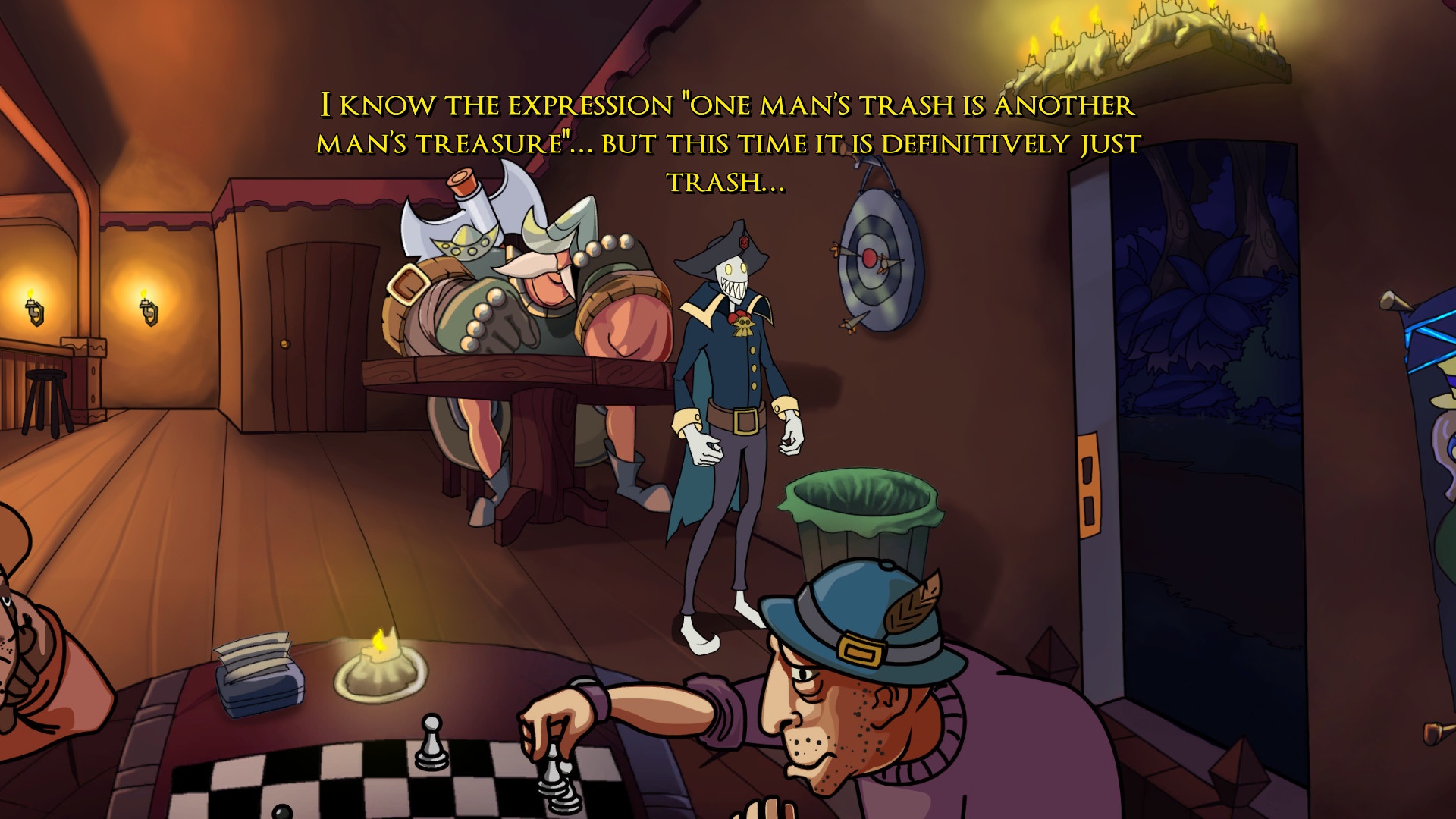 There were a few instances when I got stuck because I’d overlooked one possible trigger point in the scene. However, Darkestville Castle has a nifty “hint” button system that will highlight all of the potential interactions on the screen if you get stuck, or point you in the right direction. As an avid fan of the genre, and puzzles in general, I used the button sparingly; however, its mere presence might be encouraging to players who aren’t as savvy with puzzles and Point-&-Click dynamics. Darkestville Castle would be a great way to introduce a newcomer to this style of gameplay, even if the potential newcomer doesn’t have the background in ‘90s era titles and LucasArts’ creations.

Darkestville Castle is also free of the violence and horror that are popular in other franchises, making it suitable for most ages. There is some tongue-in-cheek humor, and veiled innuendo, for the adult players in the mix, but few things so heavy-handed that a younger player would catch on to them. Although Cid is depicted as “evil,” he’s relatively harmless, and his antics are more prank-oriented than actually brutal or cruel. The gallows humor is abundant here, but the witty dialog and slapstick quality of Darkestville Castle lends well to being appreciated by a vast audience of consumers. Fans of Day of the Tentacle and Monkey Island should feel at home here and see elements of those classic titles present in this Gothic story.

The voice acting in Darkestville Castle is another treat, and Cid, in particular, is done exceedingly well. Listening to his pronunciation of “evil” never got old, and the cast does a great job of bringing the characters together. The cartoon style graphics pair well with the overall dynamic of the title, creating a vivid, exciting landscape. I loved the medieval feel of the town and its people, though Darkestville Castle doesn’t seem to take place that far in the past. It’s like visiting a pocket of time, where demons prowl freely, and there’s a Halloween-esque vibe all the time. 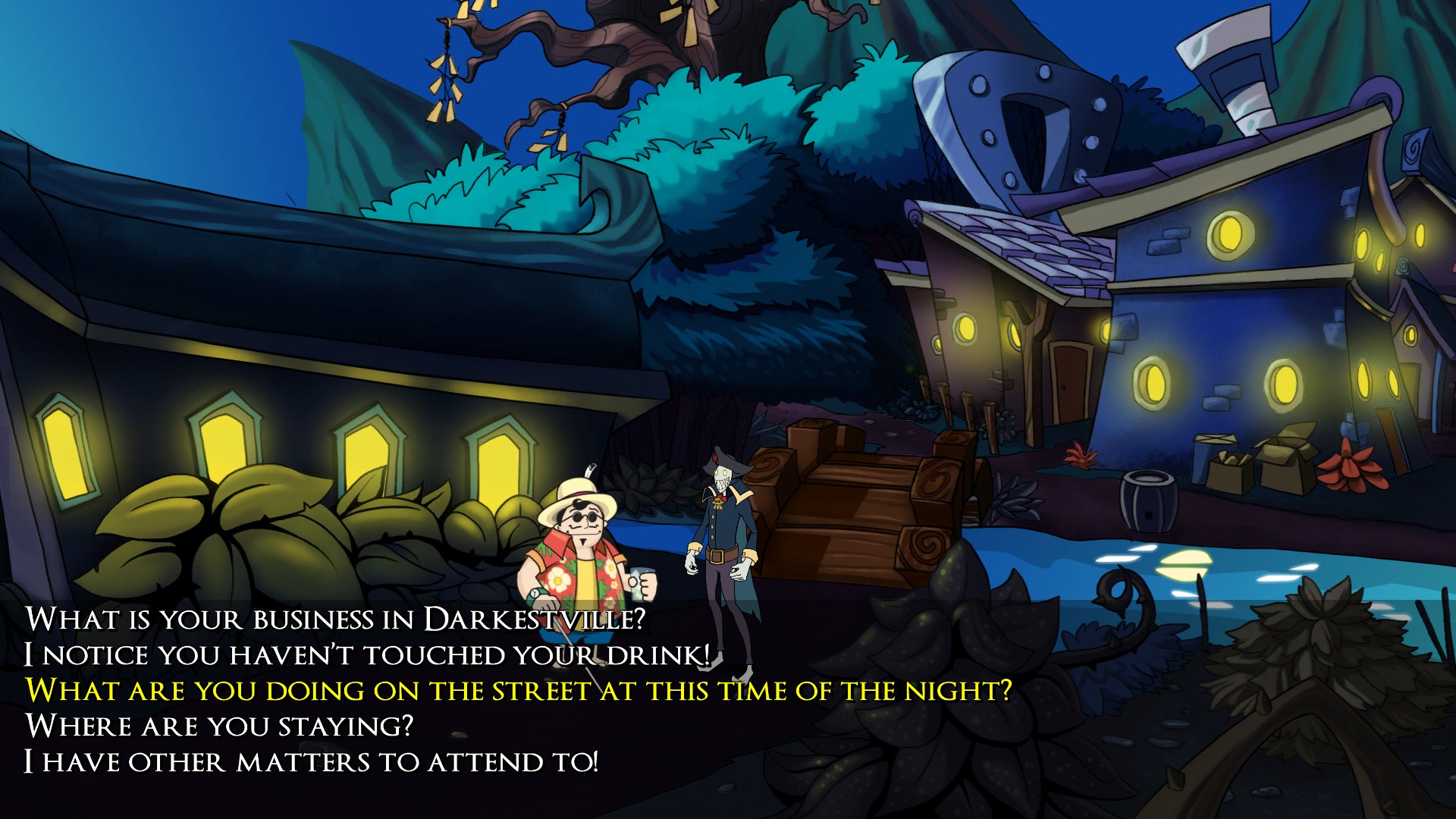 Darkestville Castle undertakes the lofty goal of attempting to recapture the charm and style of ‘90s era Point-&-Click Adventures while staying relevant in the modern gaming climate. The whimsical graphics, witty dialog, and underlining chaos of the storyline make it reminiscent of those long-ago giants of the genre, and it feels like a love letter to LucasArts and Sierra On-Line in many ways. If you’re looking for a challenging but rewarding Point-&-Click experience, Darkestville Castle is a worthy addition to your library.

Ultimately, Darkestville Castle sets out on the ambitious goal of making Retro-inspired themes in the new era of gaming, and it does so with style and grace – and a healthy dose of nostalgia for those of us who fell in love with the genre back in the day. Darkestville Castle gets my enthusiastic recommendation, and I look forward to what the Epic Llama team does next.