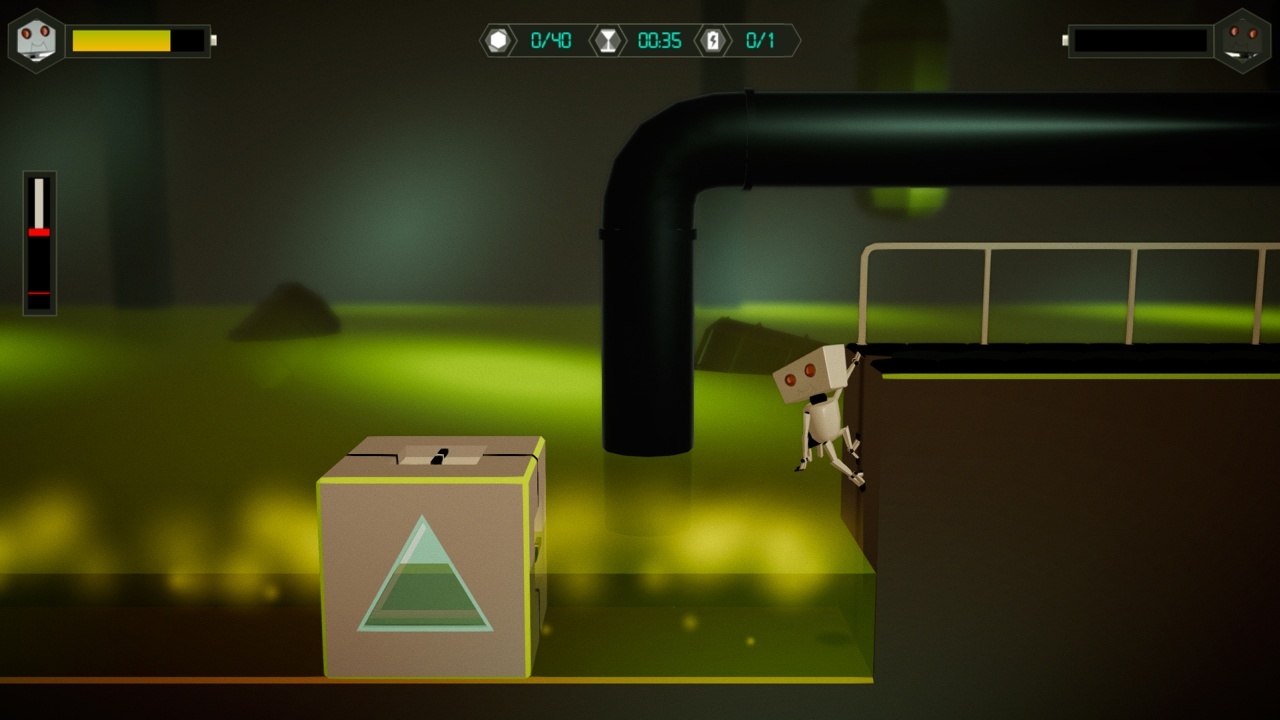 Originally released on the Ouya, with Steam and the Wii U seeing similar ports, Twin Robots, developed by Thinice Games and published by Ratalaika Games, has now been reprogrammed as it makes its way onto the Nintendo Switch in the newly entitled: Ultimate Edition.

Essentially a 2.5D platformer, the game sees you controlling two robots, Watt and Volt, which have been mistakenly labelled as defective and condemned to being recycled. In order to prove their worth and avoid their fate, you take control of both robots, either with a switching mechanic in solo play or together in a two player local co-operative mode, through a series of challenges that get increasingly difficult the further you progress within the game. Each of the levels play the same with its core mechanics in that, one robot remains imprisoned in a room that has a slowly descending ceiling, whilst the other robot runs, jumps, climbs, pushes and pulls its way through the recycling plant in order to find a button that can release his captive friend. However, there are many obstacles that stand in your way from collapsible floors, laser beams, guillotine’s and protruding spikes; all of which need to be overcome as you battle against time to find the escape button. 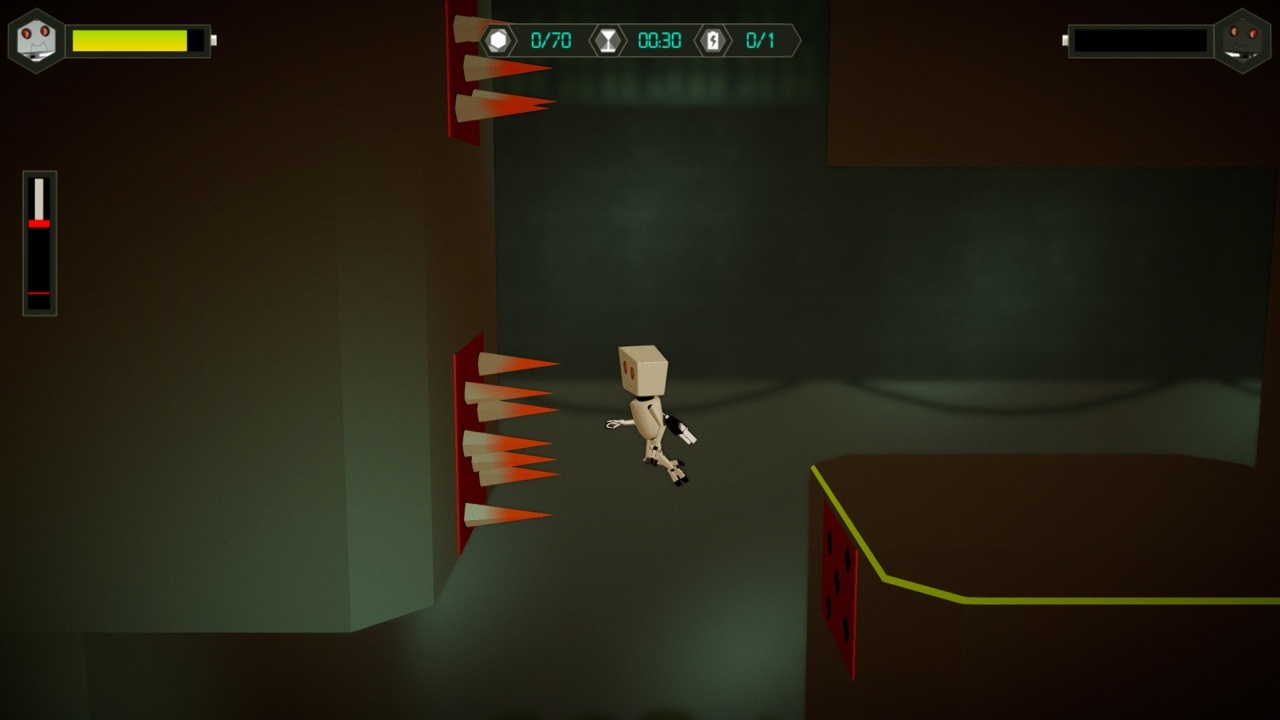 However, once freed the level doesn’t end there. It’s then up to the both of you to collect energy capsules and hidden batteries in order to gain, and transfer, enough energy in order to power up a plug at the level’s exit and escape through it. Although it sounds simplistic in its nature of traversing a generally, generic platforming model, the battery and energy levels associated with each of the robots plays an important element within the mechanics of the gameplay. With each action that any of the robots perform, an energy bar depletes which makes conserving energy an important factor in achieving success within each level; especially when you take into consideration the need to save one hundred units which are required to power up the exit. It is possible to share your energy conserves remotely between each of the robots and, although the first few levels shouldn’t present too much of a problem, the more you progress, the more important your energy conservation becomes, which all adds up to a rather fun and challenging puzzling-platforming style of gameplay.

This new ‘Ultimate Edition’ also bags a ton of extra features which makes it stand out from the title’s original release. The graphics have taken a complete overhaul with very crisp and clean sprites and more detailed backgrounds; all running at a super smooth sixty frames per seconds. The original soundtrack has been completely replaced with a new track list that has been written by Leeds-based musical composer and producer, Levi Bond. Its electro-trance beats are very satisfying here, matching the tempo of the gameplay and producing an aesthetic that is very pleasing to the ear. 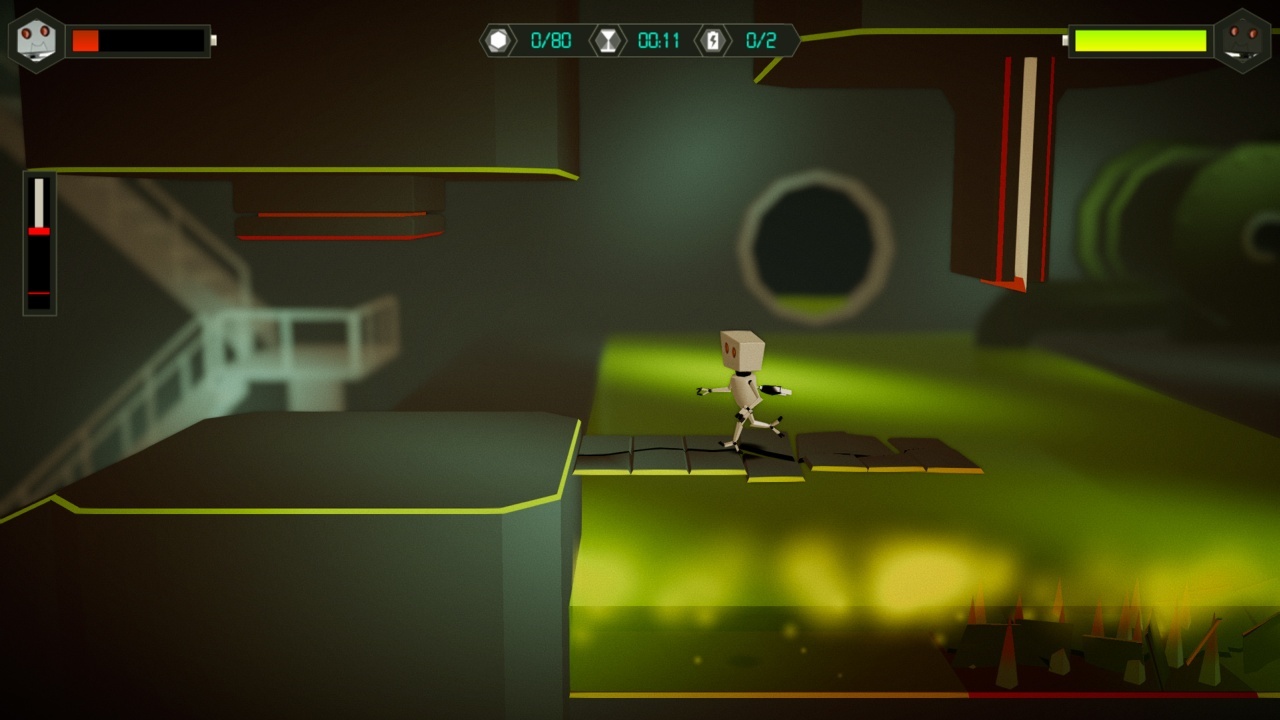 The amount of levels has also been increased from the original’s twenty eight, to a very challenging forty, with the inclusion of some extra levels that were originally developed for a planned, then ultimately scrapped, sequel. Each of the levels also contain secret areas that can be found in order to unlock some very special features that range from mini games, such as a soccer-style of game, to new paint jobs that alter the look of our two metallic heroes. Last, but not least, the game has also incorporated its own in-game achievement mechanic which means that there is more than enough variety, quality and quantity here to satisfy everyone. There’s plenty of replayability value on offer here too with timed leader boards for each level, as well as energy capsule numbers, hidden batteries and secret areas; not to mention the special features and mini-games.

Perfect for casual or lengthier periods of play, Twin Robots: Ultimate Edition offers a very solid experience, whether you choose to play solo or using its co-operative gameplay. If you’ve already played the original title, then there is certainly enough new content here to justify another purchase and if you’re new to the series, then you’re certainly in for a treat; especially if you’re a fan of platform games that require some lateral thinking to them.