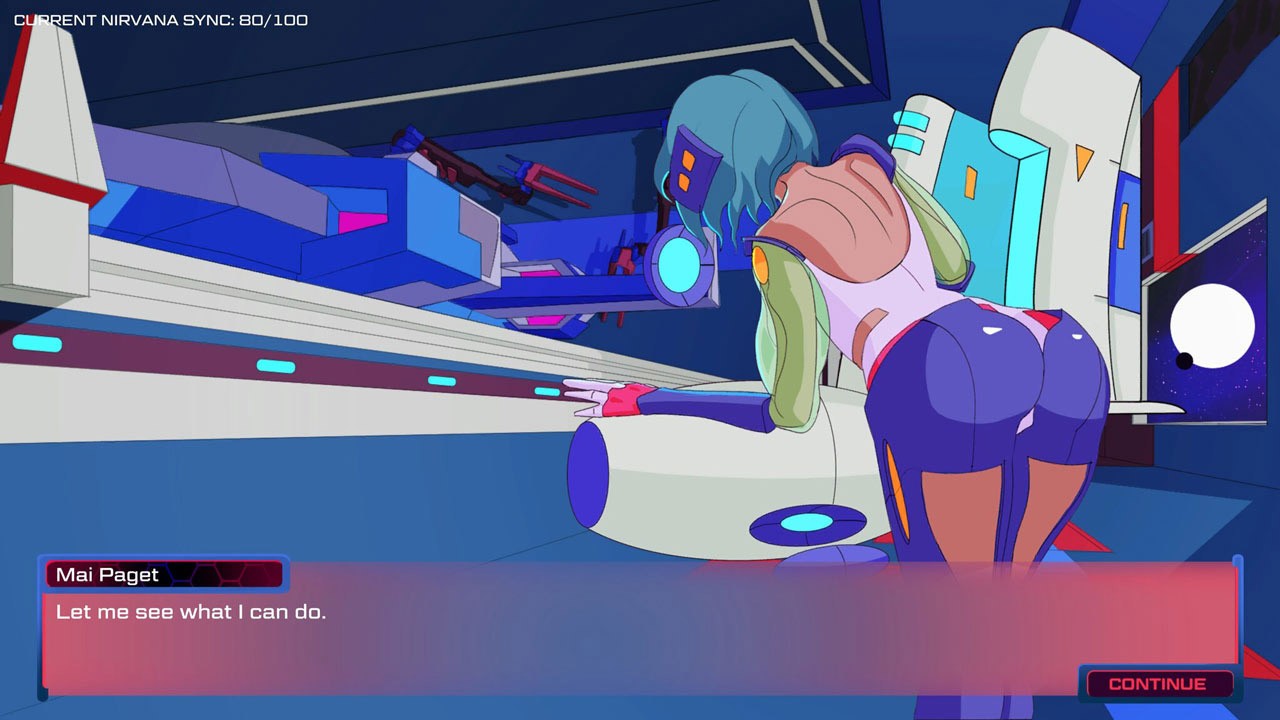 Trying to tap into multiple reserves at once can be tricky. You’ve already got a lot happening when you set out to make a visual novel: there’s character development to consider, branching story paths, relationships, etc. Then, when you add in additional gameplay modules, specifically racing elements, that’s a whole new beast to try and tame. Racing games are, traditionally, something that run the razor’s edge of being boring when the course is too easy and frustrating when it’s too hard. So, already, slamming the two together is quite a feat, but then you see the ambition for a third, crucial sector: nostalgia. Trying to evoke a sense of a bygone era in any sort of media is risky because you need to entice new audience members, transport veteran fans and still bring enough new designs and ideas while firmly nodding to what came before. Dev9K was certainly ambitious with their mashup title, Nirvana Pilot Yume, and, while the game never quite hit amazing heights, I think it’s impressive that it didn’t crash land either.

The backdrop for Nirvana Pilot Yume is exceptionally cool, there’s no disputing that. In a far flung future, disputes through the universe are settled through racing, because of course they are. A racing ship requires two people, a Pilot and an Eye, and our protagonist is Eye Aldaine, who retired from their job after a catastrophic crash. Inexplicably, an ambitious young pilot named Yume decides that she needs Eye Aldaine in order to achieve greatness and basically needles her way into your life. It’s important to note that a ship works through the Eye and the Pilot working together through what’s called the Nirvana Sync, which means you share your hearts and minds to meld into a single being, optimal for visualization and split second reactions to pilot to safety. This also means you’re definitely going to end up falling in love with each other and that leads to off screen boning, so be prepared for that.

Looking at Nirvana Pilot Yume from the three points that I outlined in the introduction, you can gauge the success of the game however you’d like, but each field has its own high and low points. For example, in the visual novel aspect, I felt like the game had a lot of potential that, frankly, just never delivers. You watch as Yume and Aldaine interact and bond with each other through talking about their pasts, their ambitions and hopes, as well as their reactions to the developing plotline as they move further and further within the G.U.R.U. (Great Ultrathought Race of the Universe). Aldaine also interacts with other people, though, like most visual novels, you have zero control over how the rail narrative goes (which is a shame, because I wanted to chase up relationships with other characters more). Instead, you’ll occasionally be given the opportunity to say one thing or another to move along the dialogue, and this shapes you better as a character and also affects your Nirvana Sync with Yume. A big, obvious hint: getting good Nirvana Sync with Yume not only improves your race gameplay, but it’s essential for a good ending with her at the finale of the game. This would be an interesting and slightly more anxious gameplay element if Yume herself wasn’t as dull as dishwater. 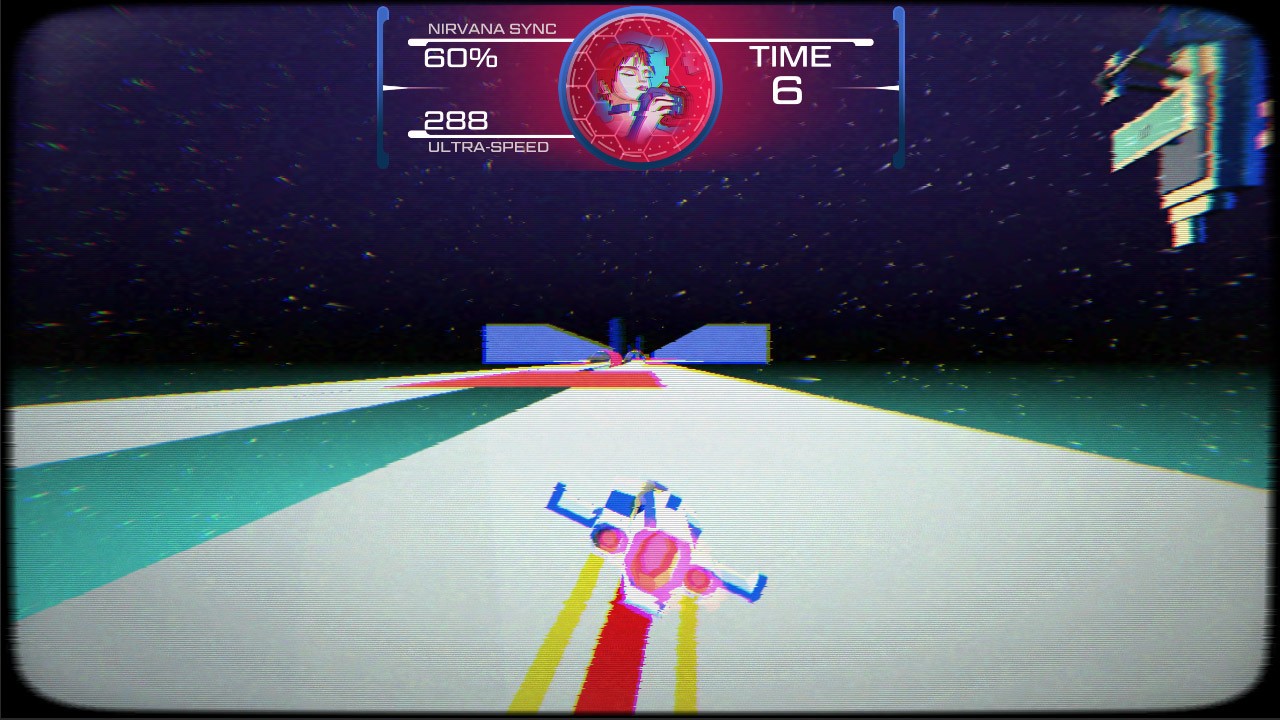 The problem with the character of Yume is that she’s entirely predictable and trope-laden. She’s got stars in her eyes and plans to be the very best (like no one ever was), but she also has a lot to prove and a bit of a bumpy past. She falls for you, she doesn’t even remotely try to hide it, and it devolves into a series of quips about focus and figuring out things while intermingling entendre after entendre. I’ve never played anything but the Switch version, but the PC port seems to suggest there was, at one point, sex scenes, and I can assure you that there’s nothing to see here within Nirvana Pilot Yume. Sure, we might talk about things off-screen, but Nintendo’s not going to let a VN hit the shelves with abject intercourse: they prefer a lot of inferred stuff. So, instead, you can build up your rapport with this girl, have some cheeky comments back and forth, occasionally get distracted by other forgettable characters and then delve into the races, where most of the excitement takes place.

Dev9K references a DOS-era game called Skyroads, but I’ve never played that. Instead, I feel that Nirvana Pilot Yume does a great job of matching a more modern game, Race the Sun, in terms of split second reaction and tight courses. You have zero hit bars or shields, and need to get to the other end of this wireframe, polygonal tracks in one piece with no errors if possible. In the story mode, loss can be a major detractor to your plot and Nirvana Sync: it can even lead to a bad ending faster than you’d like. Instead, take a moment and view all the courses that are possible for racing through the optional arcade mode, and take it from there. You’ll see that the courses for Yume are gradually more difficult, but always follow an important order and ideology. Namely, you need to gun the engine, go as fast as possible, and be ready at the drop of a hat to either jump or brake. Turns and twists come about organically: even on later levels, being able to weave through the tight alleys should give you plenty of heads up, and that generally isn’t a problem. Braking as well is something that you might feel a little awkward doing at first, but it’s essential for survival when it comes to trying to slow down before hitting into things. 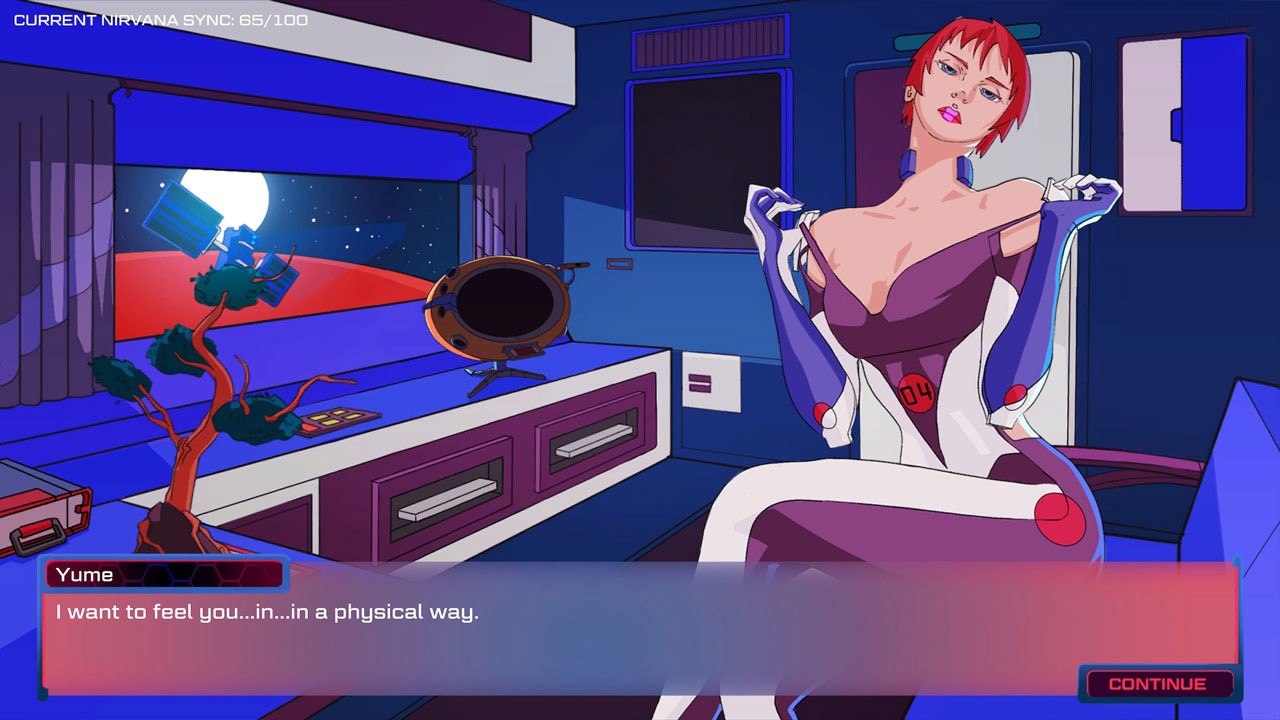 The jumping is where I take some umbrage. While it seems simple enough, the problem comes in the presentation of the course and what it means to you as a pilot. Often, the 80s aesthetics of the game means that Nirvana Pilot Yume has a changing color palette between worlds and galaxies, which looks really cool but also changes what non-terrain looks like from level to level. So you might not even think that the dark blue panels on the ground are uneven tracks until you slam into them and die. You need to train yourself to focus on a specific color, reset, and train for a brand new color for the next track. This is why a run through of the arcade gamut is important to make it to your best ending: you’re guaranteed one crash per level if you don’t pre-study what’s best for you.

Finally, I do sincerely love the way that Nirvana Pilot Yume looks and sounds. Dev9K has done a fantastic job of capturing the long, elfen style of anime characters and faces that was popular in that era, bringing to mind things like Project A-Ko or even the 80’s version of Cyborg 009. The shape of the interior and the different backgrounds are captured perfectly, but also shot through with the color range that was more popular in the Western world at that time, so it’s almost like a heavy blending of nostalgia that works fantastically. This is in conjunction with the beautifully driving, electronic soundtrack, that pipes throughout the game. You can really get lost and focus in the races thanks to Retröxx, who help to bring you, full faced, into the world of Nirvana Pilot Yume, dragging you through the raceways with the pulsing beat that captures the dramatic race sequences from games, movies and shows of the 80s. I can’t fault anything about it, it’s wonderful and I’m a huge fan.

Having said all that, it might be hard to help this game live on aesthetics alone. Nirvana Pilot Yume is a fantastic nostalgia capsule, a fun but mildly frustrating racer, and a very bland visual novel vehicle. It all adds up to an experience that is unique, sometimes interesting, but doesn’t necessarily stand out in a massive way. Consider it if you used to watch the anime films during those long summers on the Sci-Fi Channel (before it was SyFy), or if you tore through the streets with fingerless gloves and an Ultravox cassette in your deck. Otherwise, this might just be a pleasant dream that drifts past in the galaxy of gaming.

Nirvana Pilot Yume captures the music, the colors and the sexual tension of the 80s, and certainly delivers with a strong racing game, but is it enough?