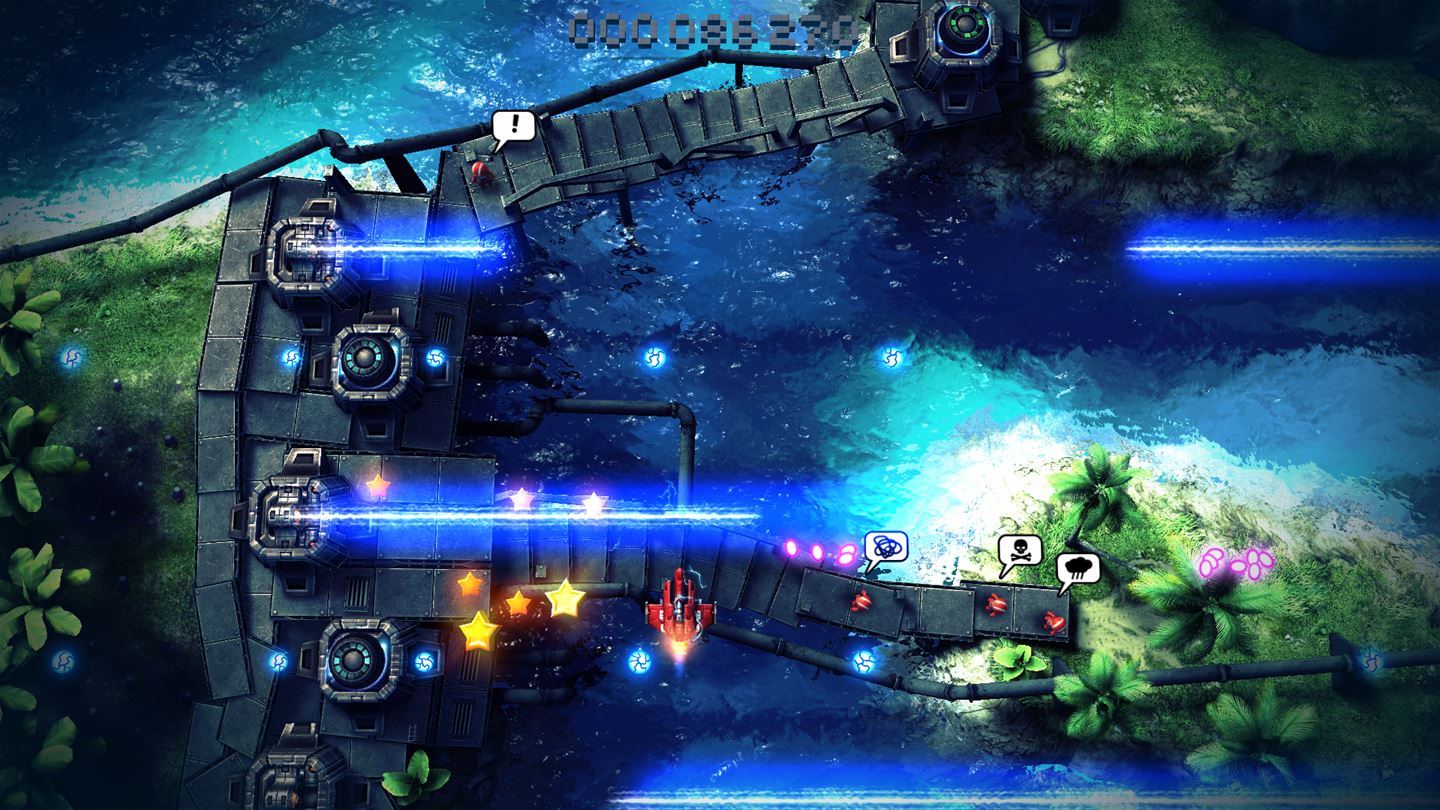 I’ve always been a fan of both vertical and horizontal shooters but be it Radiant Silvergun, Raiden, Gradius or R-Type, my interest tends to be sporadic and relatively short-lived. I enjoy these games for as long as they last, but as I rarely get caught up in the score chasing element of the experience, they tend to provide a relatively fleeting sense of entertainment.

While that is fine given the fact that I treat them as I would any arcade game, it is refreshing to come across a shoot ‘em up that retains all the hallmarks of the genre while delivering a sense of addictive progression that manages to keep me coming back time and again.

In terms of core gameplay, Sky Force Anniversary is a very traditional vertical shoot ‘em up. Despite being created by Polish developer, Infinite Dreams, Sky Force has all the hallmarks of a traditional Japanese shoot ‘em up with the gameplay heavily influenced by Capcom’s seminal shooter, 1942. The only major difference (beyond the more modern visual design), is the inclusion of its addictive upgrade and medal systems.

Despite being a relatively short game (8 stages in all), Sky Force Anniversary is not a game that many will be finishing on their first attempt. After a cool introductory scene in which your fully powered aircraft is destroyed and subsequently stripped of its abilities ala Metroid, you are then left with a pitifully underpowered craft with which to take on the army or ground and air forces eager to shoot you down. Rather than the usual upgrades that are found floating around the stage and subsequently lost when killed, here, upgrades are purchased and carry over between games. Purists might well scoff at the thought and yes, it certainly does diminish the ‘purity’ associated with a more standardised shoot ‘em up structure, but for more casual fans and those looking for something a bit different from what has always been a stubbornly static genre, the constant draw of the stars-based upgrade system is likely to prove highly addictive. 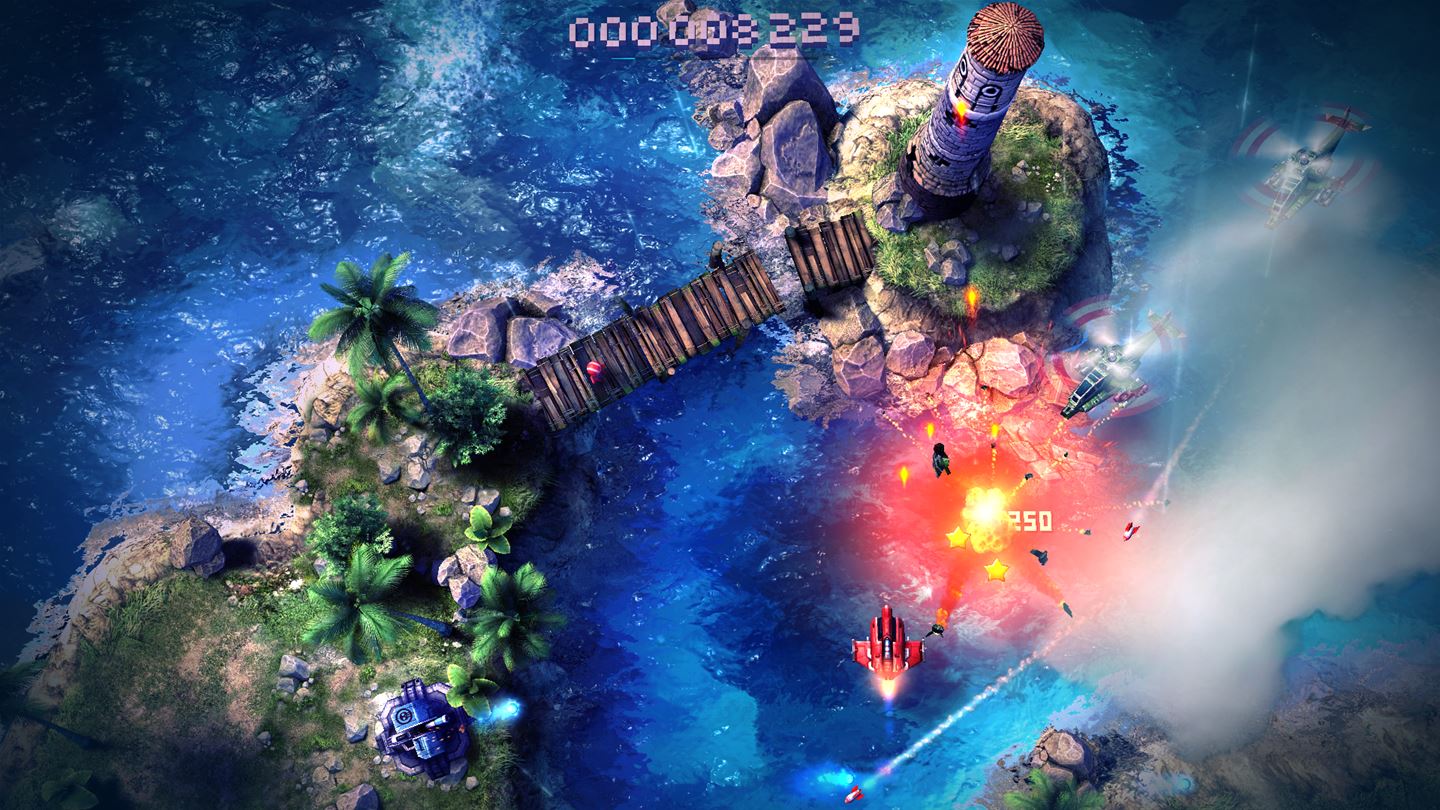 The medal system doesn’t have such an obvious impact on the gameplay, but for those looking to perfect their run rather than simply complete it, there are a number of medals that encourage you to push your ability or take a slightly different approach to gameplay. Whether it be destroying a certain percentage of the enemies on a stage or not taking any damage on your run, the medal system adds additional longevity which, due largely to it being intrinsically linked to your progression through the game, becomes a surprisingly crucial aspect of the overall experience.

While the structure might be relatively unique when it comes to the shoot ‘em up genre, the same can’t be said for the core gameplay. It’s solid, slick and highly enjoyable, but don’t go expecting any unique twists on the traditional mechanics – there is nothing here to match the polarity system found in Ikaruga or the time travel mechanics of Sine Mora. Sky Force falls comfortably in line with its most obvious inspiration and is happy to remain true to the most standard of genre templates in this regard. 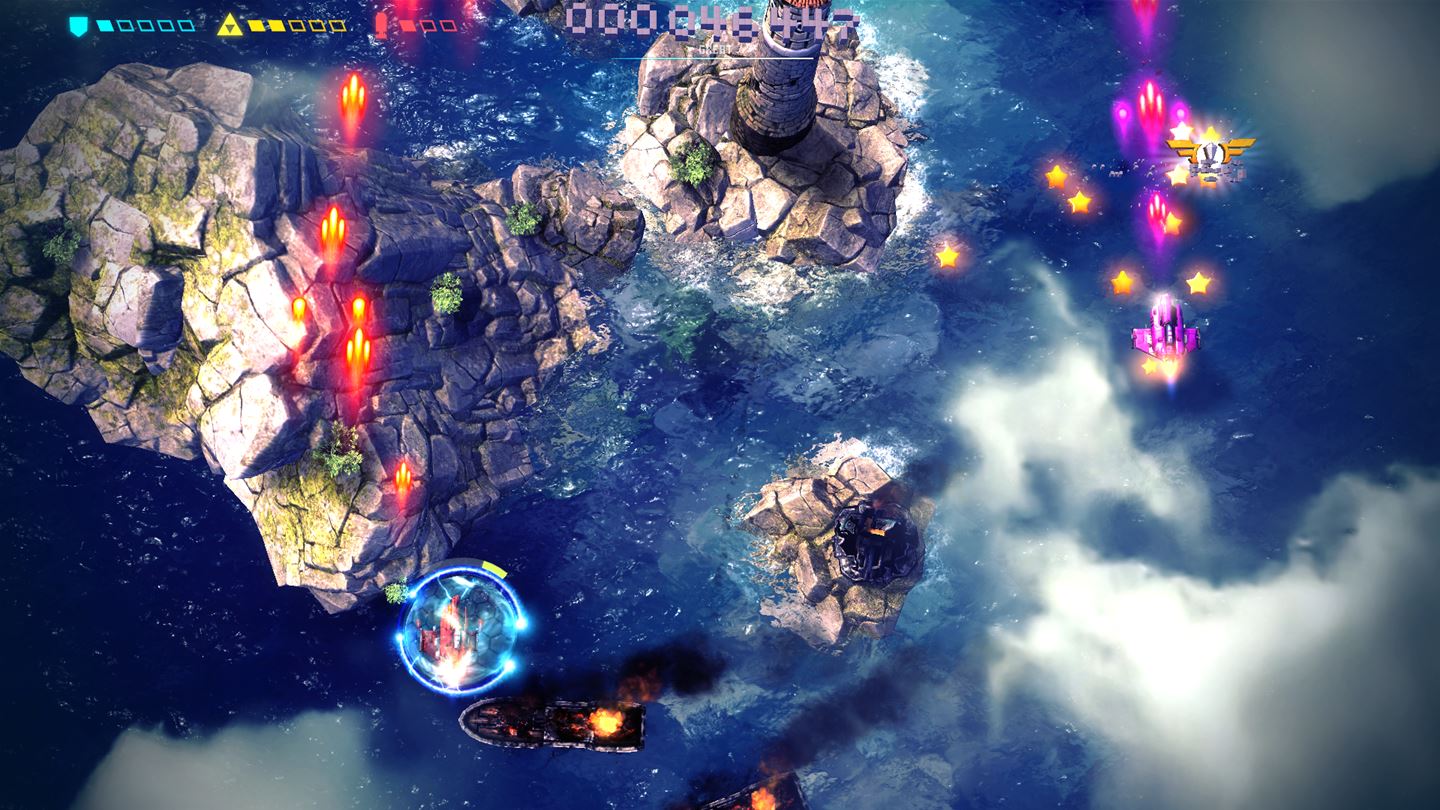 Still, despite the gamplay proving largely old-fashioned, the visuals remain surprisingly impressive given the games’ history on iOS. It might be an anniversary version of the original Sky Force released back in 2004 (12 year anniversaries are obviously a biggie in Poland), but in practice, this is more of a re-release of 2014’s equally brilliant free to play iOS version, Sky Force 2014. While the free to play elements have obvious been rethought for the 2016 release, Anniversary remains a very similar game with the visual style in particular proving almost identical. Replacing the original 2D visuals of the 2004 release, Sky Force Anniversary is now home to a fully 3D-rendered art design that retains the colourful, arcade-inspired visuals of the original while bringing the technology behind it all successfully up to date. It’s hardly revolutionary, but as far as shoot ‘em ups are concerned, Sky Force Anniversary is certainly one of the more technically impressive examples of the genre.

The lack of online co-op might bother some, but this type of game has always been better suited to local couch co-op which is supported here and great fun throughout. Some might begrudge the complete lack of online options, but it’s hard to get too perturbed by such minor grievances when the rest of the game is such a joy (especially when it is as reasonably priced as Sky Force Anniversary is).

It arguably lacks variety, and yes, the omission of online play will be felt by some, but for the most part, Infinite Dreams’, Sky Force Anniversary proves a welcome return to one of the finest shoot ‘em ups made outside of Japan and a perfect example of how to port games from iOS to home consoles. The gameplay might be resolutely old school but the structure is anything but. Sky Force Anniversary combines traditional mechanics with an addictive sense of progression to deliver one of the best shoot ‘em ups of the generation.