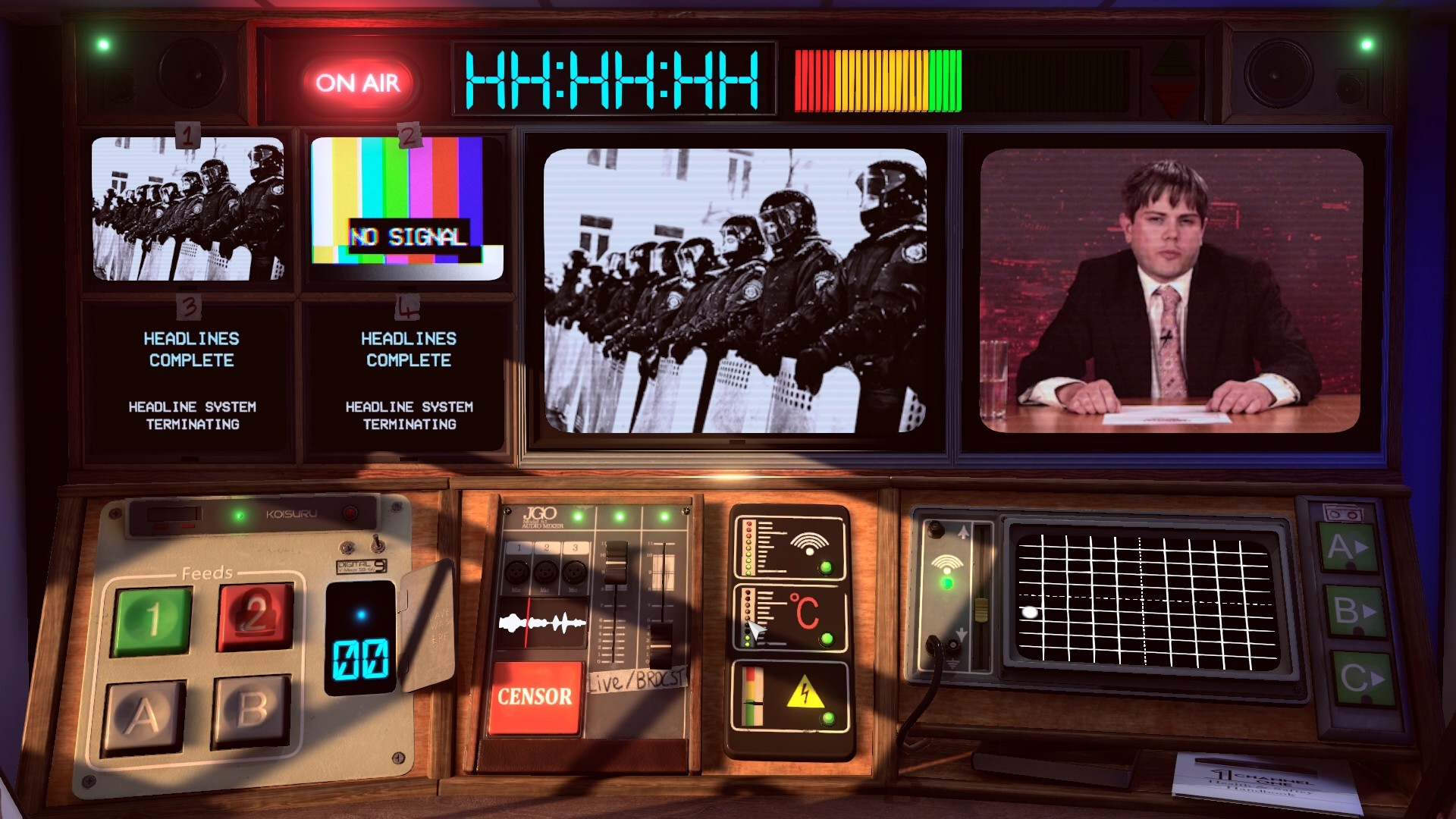 Not For Broadcast is a game where you’re put at the helm of the National Nightly News, where your job is to make sure that entire broadcasts are completed as smoothly as possible. This might sound rather peaceful, but your task is only aggravated by the troubled times that are being lived in your country, which are mostly thanks to the recent rise of the political party, Advance, to power.

At the moment, there are 3 episodes available in the Early Access version, which took me just a little bit over 2 hours to complete, and a total of 10 episodes are planned for the game’s final release. While each of these episodes corresponds to a single broadcasting session in the studio, there are also these text-driven sequences, some of which can take place weeks apart. In these sessions, numerous events happen back at your place: Christmas dinner, surprise visits, family arguments, and so on; just your ordinary daily dose of life. However, these instances do contain choice-driven scenarios that will impact your character’s life. It’s almost as if it’s two games in one, a news station studio management game and a choose-your-own-adventure type of novel. 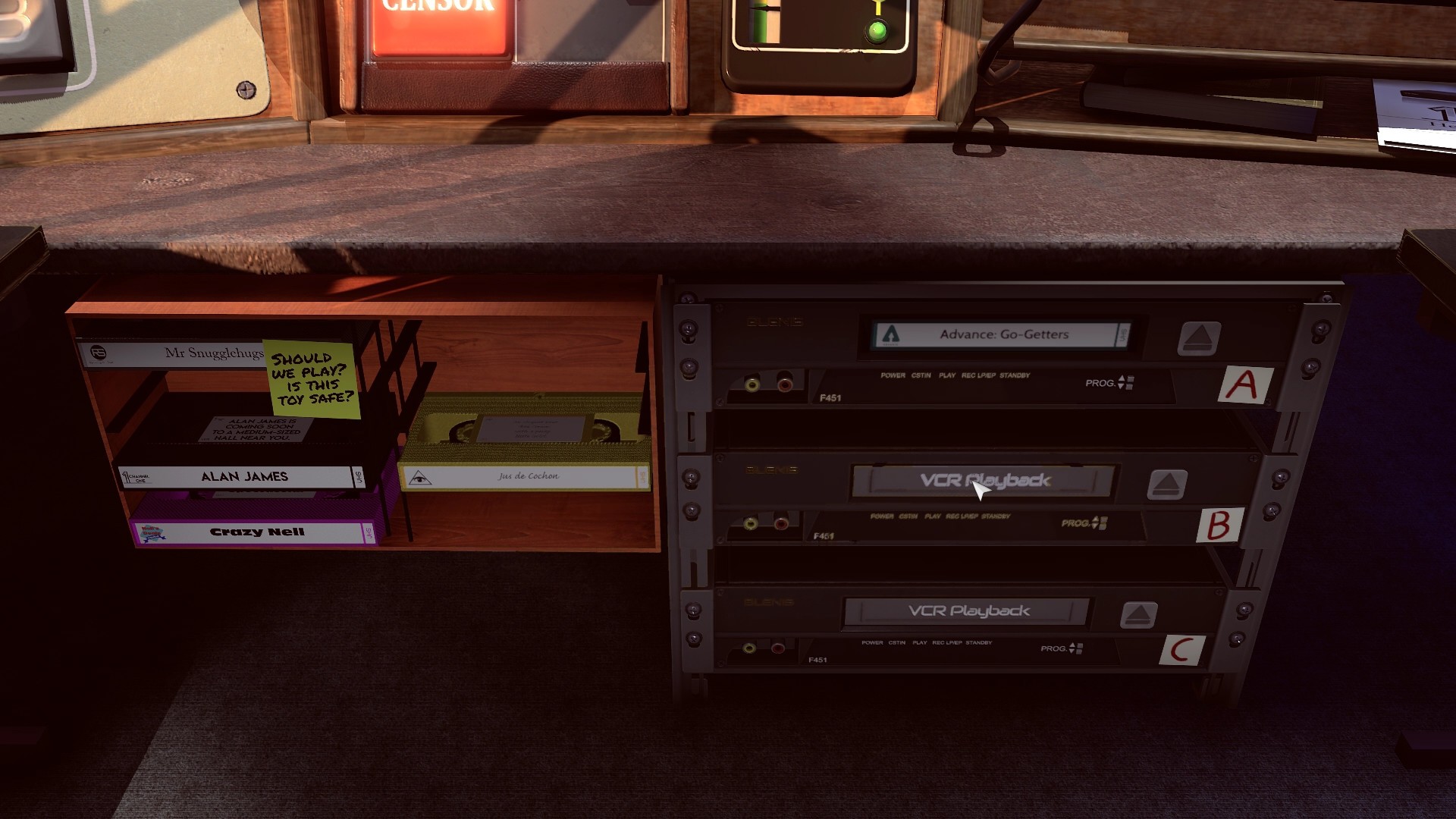 The game’s mechanics are inherently tied to its visual representation, that is to say, your studio and the camera feeds coming your way, and the management side of this aspect is without question the core gameplay element of Not For Broadcast that is getting so many people hooked on this game, so I’ll try to explain it as briefly as I can. There are a total of 6 screens in the studio, four small screens which show you different camera angles or feeds, which you can switch to as you see fit, one screen on the middle which shows what you’re going to be transmitting, and then there’s another screen to your right side, which is a few seconds behind, that shows the current live feed that the audience sees. There are also a few small mechanisms that you’ll have to interact with during broadcasts, but these are pretty self-explanatory when you see them, and the game does an excellent job of explaining things to you.

For the most part of your job, you’ll be handling the change of cameras between different speakers during the news and interviews, whether they be inside the studio or in some other place. If you keep feed on a camera for too long, your audience will start dropping, and the same goes for any poor change of camera or not showing whatever you’re required to show. There is a need to be actively engaged on the broadcast, like switching the camera to someone once they start talking, or show someone’s reactions to a specific comment for just a few brief seconds. If you’ve seen a lot of news or talk shows, then you’ll find the whole thing very intuitive.

Despite all the camera work required of you, there are also other aspects that you have to manage simultaneously. For instance, there are a few times where you have to pick one out of two different images from the news archives to show to the public regarding a subject, and each image will supposedly change the public opinion in regards to that subject. There are also specific times where you have to play advertisements, assuming you inserted them into the VHS player beforehand, and there’s this small mini-game where you just have to move around a ball in a screen and avoid obstacles to avoid interference, which the audience obviously hates. Then there’s also a censor button, which you can use to censor swear words or dissenting opinions, but while the game provides you with an indicator for when you should do that, it doesn’t force you to do it. 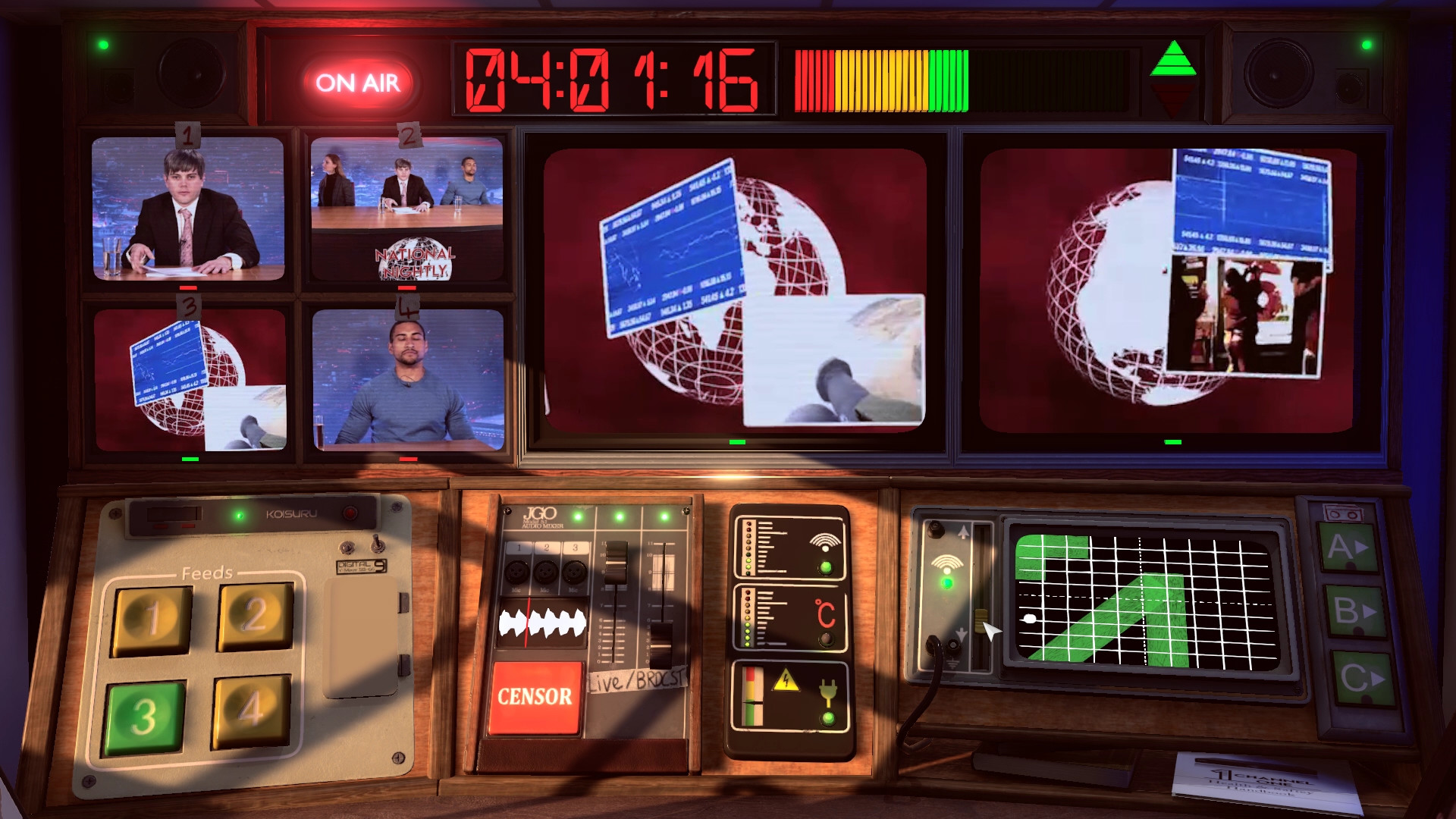 I know it’s important to note when a game is in Early Access, but after playing the content that is currently available, and after reading the developers comments on the state of things, I believe it is paramount to mention that this is a game that might change a lot in terms of mechanics before the final version is released. This is mostly due to the amount of work that goes into the recordings and the scripts of each level, as these have to function seamlessly with the game mechanics, so this is will probably take quite a while before it is finished. The developers estimate an Early Access period of 18 months, so fingers crossed.

The actual recordings and the story being told, and especially the way it is being told, is nothing short of amazing. The behind the scenes shenanigans that only the people on the studio get to experience, or the spectators if you accidentally leave the cameras rolling, really add a lot to the whole experience. Not For Broadcast is, without a doubt, one of the most unique and compelling games that I’ve ever played, and I’m sure that a lot of people will enjoy it, no matter their taste or preferences.

What really stuns me, is the fact that no one has ever tried to do something like this, or maybe I just didn’t hear about it(?). Nonetheless, the team over at NotGames deserves to be congratulated for making such an intuitive gameplay experience that is accompanied by such a hilarious cast of characters and the situations they find themselves in. That isn’t to say, that this is a funny game in the strict sense because Not For Broadcast is quite satire heavy, even if you can draw a parallel between the game and the real world most often than not. With all that said, and just in case it wasn’t obvious, I highly recommend Not For Broadcast, and if you find yourself enjoying it, please do us all a favor and tell everyone you know about it.

Not For Broadcast Preview