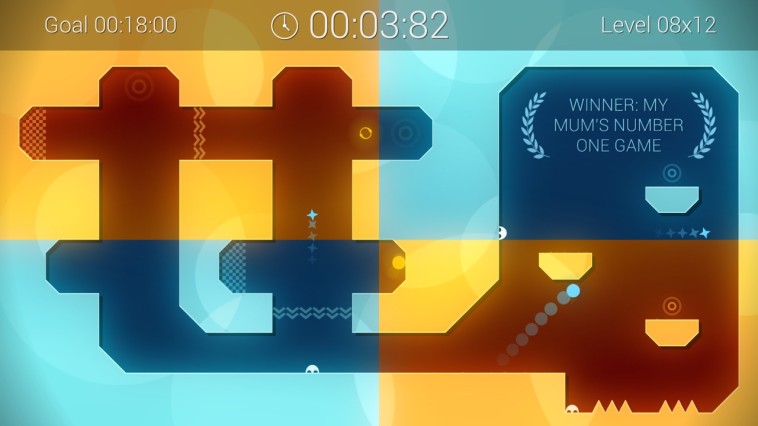 I think that snarkiness has its time and place within games, especially puzzle games. I’ve mentioned before how Portal helped set the pace and the gold standard for what it meant to have a game mock and talk down to you. I mentioned how the atmosphere of Death Squared sought to capture this idea and did a good job, if somewhat trying too hard. So when a new contender, Binaries, brings the same idea to the table with a different puzzle hat, certain expectations are held. Sadly, I don’t feel they were delivered on in a way that will appeal to everyone.

Binaries is a pretty simple idea that can be easily understood. You have two balls, one orange and one blue, working in tandem to reach their same colored goals. Two big problems. One: there’s only one set of buttons for both, so the balls must move and jump at the same time. Two: their two levels are far from identical. Much like Semispheres, thinking outside of a traditional construct is needed to achieve greatness and success, and this is where things start to fall apart pretty fast in terms of accessibility. 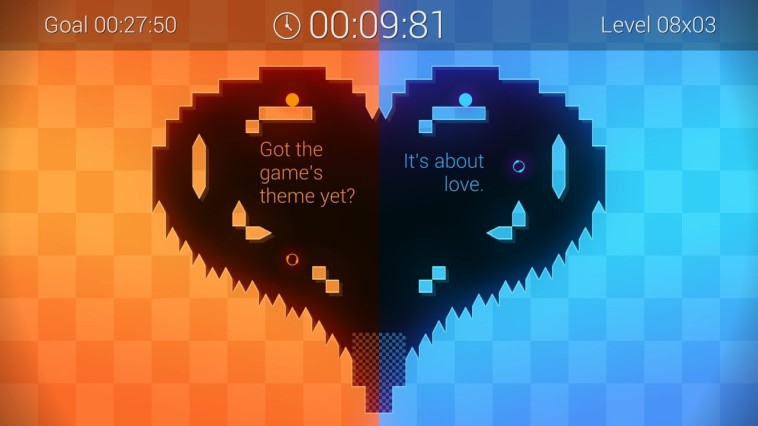 For one, the levels are hard. Like, right after the second or third stage, the difficulty ramps to a nearly vertical incline. Rather than just have annoying pitfalls and angles, the game straight up has spikes that will destroy your ball the second you touch them IF you’re the same color. I did think that was pretty clever: the orange ball can rest safely on blue spikes and vice versa. Understanding this caveat does allow for more freedom and flexibility, but it’s like saying understanding the bullet logic of Ikaruga makes the game easier. It doesn’t, at all, and you’re left in the same situation with Binaries.

The problem, I think, is that Binaries is seeking to make a puzzle game for a particular type of gamer, the Super Meat Boy crowd, who enjoys the tough-as-nails motif hidden inside a seemingly innocuous setting. After all, getting successfully to the goal in Binaries has the same thrill as a no-death run in any other hard platformer, but Binaries’ double ball mechanic makes it even more difficult, as trying to keep an eye on both at the same time gives a lot to consider and creates a considerable amount of frustration. Not to mention that, when you get uneven landings, the controls start to unpair a bit. Being able to pin down one ball while moving the other is the key to success, but it’s not always as easy as “park and run.” Frequently, I ended up with double digit deaths because my sphere, which I thought was safely situated, found a way to free itself and merrily run towards the spikes while its brother was struggling towards the goal. Instead of inspiring me to try harder, I just felt…angry.

And the AI in Binaries is seeking to balance this all out by having text “voice overs” to give you sarcastic and clever little notes. I have to admit, the notes from the overseer were fun and not overbearing. It was a good capture of the “dry” humor that I would expect a slightly malicious computer program to have, but the problem is the delivery. The text works great in terms of narration and joke telling, but, once the lines are finished, they just hang around screen. It doesn’t obstruct your vision (the developers made sure it was transparent lettering), but the fact the words float there, unchanging, while you keep dying, felt even more mocking than the messages themselves. 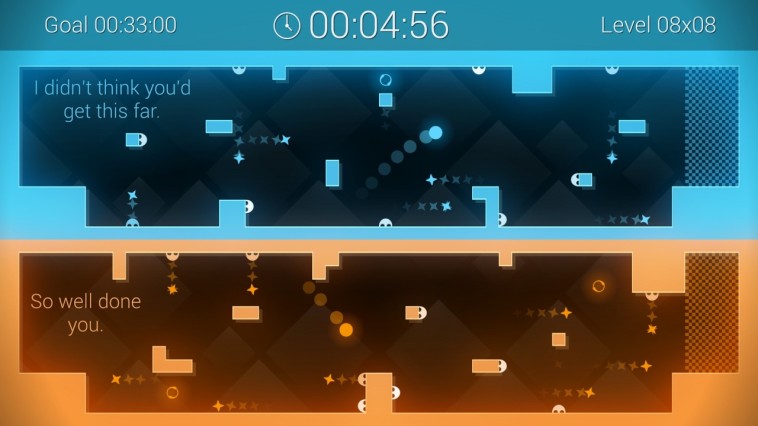 Now, aesthetically and aurally, I did enjoy the design of Binaries. Toggling between levels creates different tones and sounds, which I could almost make a song out of once I had accomplished enough levels. Additionally, I sort of dug the soundtrack starting out pretty quiet and light and progressively getting more driving and funky as I kept playing the same level over and over again. It felt like the game was doing it’s best to cheer me on, seeing I was struggling and giving me some sort of inspiration, even if that was “finish this level and the song is done!” And the blue and orange tones, very akin to Semispheres, had a nice pop and finish to them. The layout of the stages were quite clever, because, once you realized the sequence needed to get to the end, you had the clarity moment when the answer seemed so easy.

Binaries is certainly not for everyone. I fully admit that my own lack of skill with “twitch platforming” caused me to fail way, way more than I should and dragged my play time out to probably twice what the game actually requires. There’s a percentage meter that tells you how much is left of the game, and that meter is also affected by your performance (there’s B, A and S rankings, plus the number of deaths it took). Watching the numbers grow and knowing you’re kicking ass is a positive reinforcement for some, but this is in a dangerous position amid all the more “casual” puzzle games that have landed recently. I need to make it crystal clear: Binaries is hard. Crazy, crazy hard. But it’s good, if you can stomach the pain, and the writing is the right balance of funny and insulting. Make sure to play it up on the screen and not in handheld mode, because it’s easy to replace Joycons that you throw: a whole new Switch is expensive indeed.